The 3-D Man has enhanced physical abilities and sensory acuity. He’s described as being 3 times as strong, fast, tough and perceptive as a healthy human. He’s also a remarkable hand to hand combatant, and can access all of his brother’s skills.

Furthermore, the 3D Man has a limited quasi-telepathic ability to perceive the distinctive aura of the Skrull race. This works even when they are in another form.

Charles “Chuck” Chandler was, in the early 1950’s, the man chosen by the NASA to test-flight the early XF-13 spaceplane. But the tests went strangely.

First, “foreign agents” attempted to kidnap Chuck, though he drove them off with the help of his handicapped brother Hal. Then, during the maiden flight, the XF-13 and Chuck were abducted in the very air by Skrull space aliens !

The abductors were the same persons as the “foreign agents”. They were very interested in Earth and its technology due to our planet’s strategic importance. But the all-American Chuck resisted, damaged the UFO beyond repair and made it off with the XF-13 just before the UFO exploded.

The detonation bathed Chuck in alien radiations. Very ill, Chuck attempted to crash his plane in the Mojave desert, near the place were he knew his brother was watching the flight. Chuck made it. But as he got out of the plane to meet his brother, he disappeared in a flash of light.

The red and the green

The following night, the distraught Hal noticed that two images of a man, one red and one green, had been imprinted into his glasses by the flash. He discovered the 3-D phenomenon. By concentrating on these images, he could lapse into a trance while conjuring the 3-D Man, an entity based on Chuck.

Aware of the presence of Skrull infiltrators in the US, the 3-D Man soon began smashing Skrull plots.

He was active during the 1950’s. He was part of a hero group called the Avengers, fighting such villains as the Great Video, Skull-Face or even the Yellow Claw. 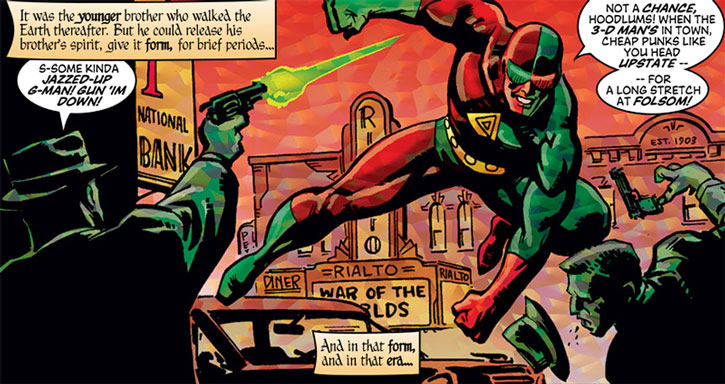 The 3-D Man retired when it seemed Chuck’s personality had been destroyed. Hal decided to marry Chuck’s girlfriend, Peggy. By that point the Skrull plot had been so damaged by the 3-D Man that the aliens had to fall back and abandon their invasion plans.

The 3-D Man only came back two times AFAIK. He had one encounter with the Hulk, and was later conjured by the Grandmaster to be part of the Contest of Champions.

For a long time it was unclear whether the 1950s Avengers were in continuity (3-D Man is ; the problem is with the group itself). The question was solved when the events involving the 1950s were stated to have occurred in a variant timeline, and that timeline was wiped out in Avengers Forever.

However, that was to avoid the “Avengers” name ; the group could have existed in the mainstream timeline if it had another name. ”The G-Men” has been suggested.

The continuity issue was eventually readdressed, but that was years after this writeup.

When the 3-D Man is physically manifest, his body is based on Chuck’s. That includes the special body suit he wore when he died – but with the 3-D colors, and now a part of his skin.

The 3-D Man has a personality mostly based on Chuck’s. He’s energetic, enthusiastic, a born winner and one of the greatest test pilots of his time (although forever behind Ben Grimm and the other Chuck, Yeager). He’s very direct, as patriotic as can be expected, and impatient when tackling problems.

However, the 3-D Man also has the intuitive, analytical, observant nature of Hal. It is unclear whether the 3-D Man consider himself a full person or a gestalt . But he sometimes talked about Chuck and Hal as if they were different persons from himself.

Hal Chandler is now an aging, peaceful research scientist. He only cares about his work and his family. It is possible he’s loathe to summon the 3-D Man because he does not want Chuck’s consciousness to realize Chuck’s former girlfriend is now Hal’s wife.

As a younger man, however, he spoke harshly. He hated the pity of others toward his broken body, and was out to prove he didn’t need anyone’s help. His only non-adversarial relationship was with Chuck, with whom he shared fraternal love but also some jealousy.

See the writeups for the Skrull Kill Krew.

Bonuses and Limitations:
Detect (Skrulls) cannot pinpoint a target if there are too many lifeforms around it (e.g., a crowd).

Drawbacks:
Alter-ego (involuntary : the 3-D Man can only exist for 3 hours at a time), MIA toward patriotism.

Hal is the host body for the 3-D Man gestalt. He is physically quite diminished : he’s astigmatic, requires glasses, and his childhood polio render him unable to walk without crutches.