8-ball has significant technical skills, and is reportedly a world-class pool player. He’s also surprisingly competent and efficient – note the high number of Hero Points  for such a minor villain. His outlandish look and gimmicks can definitely lead opponents to gravely underestimating 8-ball.

True to his obsessive nature, 8-ball will occasionally spend a few Hero Points on his shots to make them more impressive (in DC Heroes RPG terms, either AV or EV). In most cases, though, he can restrain himself and perform impressive but not needlessly difficult shots.

8-ball’s main weapon is his special cue, which amplifies the applied strength more than a thousandfold. He can poke even heavy objects, such as cars, just as if he were just shooting pool. Said object will then go flying with amazing force. In defiance of the laws of physics, this doesn’t produce any recoil. _-ball once “shot” a manhole cover that cleft a police car in two, lengthwise.

Somehow, the projected person or object takes no damage from the brutal acceleration. For instance, 8-ball once “shot” various civilians at Sleepwalker to distract him. Being propelled with great force did not hurt them, but impacting with a wall at such speeds would likely have been fatal.

Another gadget is his flying giant eightball. It is not unlike the Green Goblin’s bat-gliders, as 8-ball stands on it and pilot it via body english. When riding this vehicle, 8-ball wears special boots that can adhere to the ball’s surface, presumably via magnetism.

8-Ball originally employed a group of three henchmen in costumes similar to his. Of them, only 9-Ball spoke or was addressed by name. He was a rather stupid and cowardly thug. They carried explosive billiard balls.

8-Ball appears to have abandoned his gang. A letters page theorised that they were so incompetent in their outing against Sleepwalker that he dropped them immediately thereafter.

Jeff Hagees worked as an engineer designing missile propulsion systems. His passion was shooting pool and betting on pool games. As a result, he wound up owing money to the underworld. His employer discovered this, and Hagees lost his top secret accreditation and thus his job.

Embittered, Hagees started building pool-themed gadgets and an unique costume. In 1991, he became the bank-robbing criminal 8-ball. Apparently, part of his loot was used to pay for hospital care for his invalid grandmother.

Walking in your sleep

During a robbery, 8-ball easily defeated a weakened Sleepwalker. But the otherworldly hero soon rose again and defeated his gang, forcing 8-ball to flee as cops arrived. Sleepwalker intervened again as 8-ball was robbing a highly valuable trophy from a pool hall, but was defeated.

8-ball tied him to a giant flying eightball and sent him floating in the sky above New York City to explode ; Sleepwalker barely escaped.

8-ball went to a Bar With No Name to gloat about his success and bet his loot against another super-villain in a pool game. Other drinkers turned him down, knowing he was one of the best players on the East Coast. But Hobgoblin (Jason Macendale) grew tired of his bragging and challenged him to a competition. The first to kill Sleepwalker would win.

Using flying billiard-ball-like surveillance drones, 8-ball located Sleepwalker and engaged him in combat. However, the Hobgoblin had been shadowing him, and joined the fray to win the game. As it turned out, Sleepwalker wasn’t actually the hero but his human host, Rick Sheridan.

8-ball realised that something was off. Although they killed their inexperienced opponent, 8-ball convinced Hobgoblin that this person was not Sleepwalker, and Hobgoblin eventually dropped the bet.

In 2004, 8-Ball was one of the inmates of the Big House who was recruited by the Mad Thinker (actually a robot simulacrum) for his breakout plan. The plan very nearly worked, but while the escapees were still stuck at action figure size, She-Hulk defeated them all. She used 8-ball as a projectile, ricocheting him from villain to villain.

In 2006, 8-ball was seemingly killed by the Wrecker for having stolen from a crimelord. However, in 2009 a man wearing a 8-ball costume, who may have been Hagees, was spotted at a Bar With No Name that Spider-Man and Daredevil invaded.

8-ball is an obsessive pool player and gambler, betting large on pool games in seedy bars or against other top players.

Hagees chiefly commit crime to earn money to build equipment, bet on pool games, and support his grandma. He has a soft-hand, Silver Age -ish approach to his crimes, a bit like the classic Riddler. He is the sort of villain who’d commit Silver Age-ish themed crimes for the fun of it.

While he will try to kill his opponents (especially if there is a bet riding on it) and doesn’t hesitate to endanger cops and civilians he’s there for the flash, not for the blood.

Hagees lives as an outlaw without a secret ID, and had no qualm recounting his origin or showing his face to Sleepwalker.

(After demonstrating a very difficult stunt with his special cue) “With the proper english on the ball, you can sink any shot, boys.”

“Our opponent seems determined to clear us off the table !” 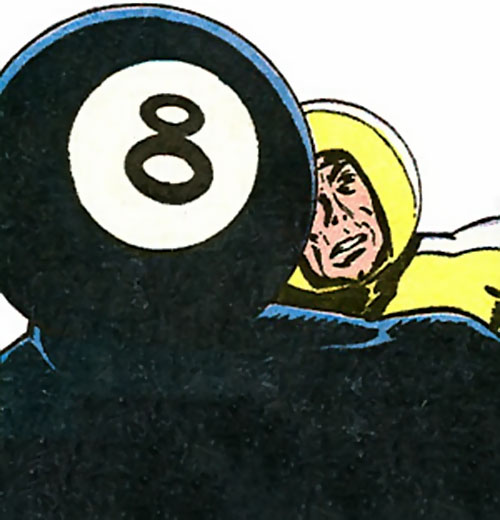 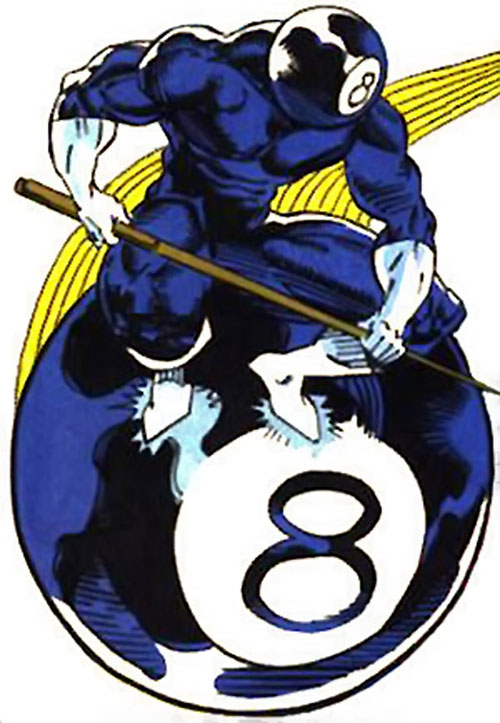 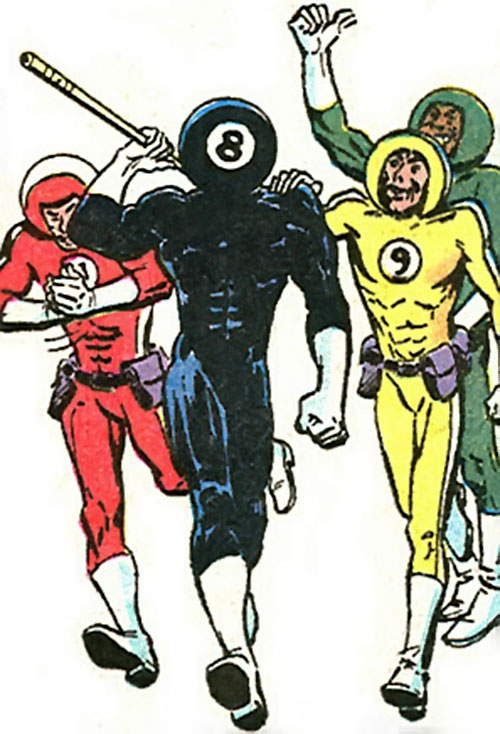 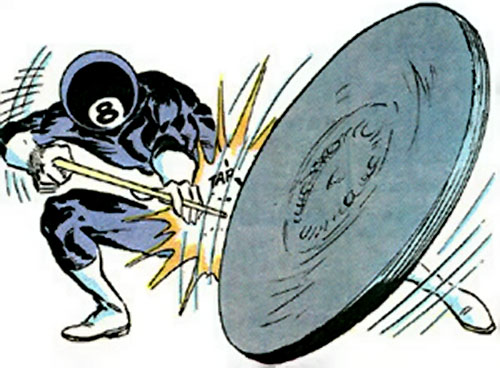 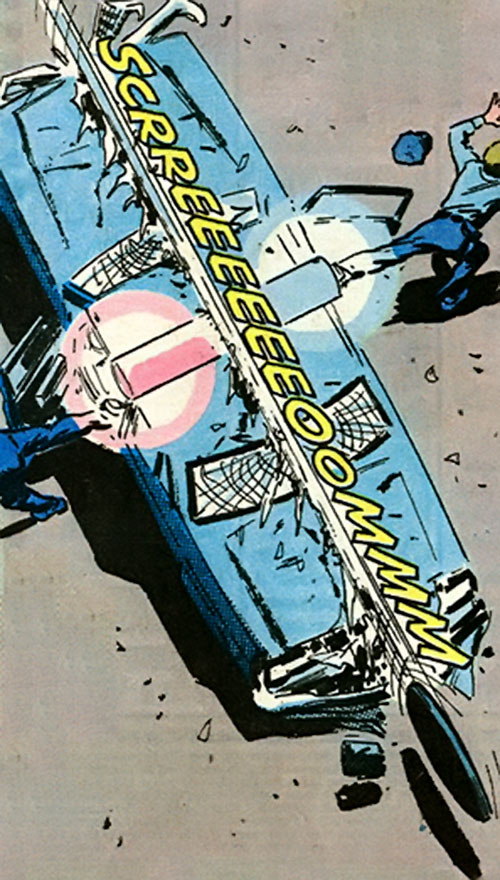 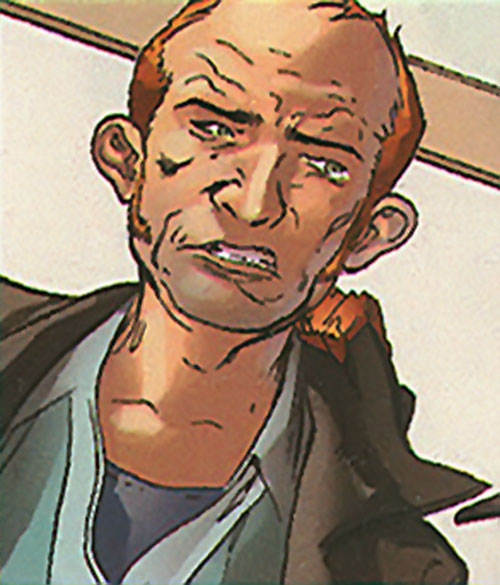