Aardwolf was stated to be stronger and faster than the armoured Night Thrasher, and has clawed fingers. However, despite his speed and his instinctive ferocity, he’s not a practised hand-to-hand fighter and will not fare well against heroic opposition.

Aardwolf is an influential Madripoor crime lord with significant turf. But he wasn’t operating at the same level as Tyger Tiger or Gen. N’Guyen Ngoc Coy.

Aardwolf is a superhuman mutant from Madripoor. In his youth, he established himself with local organised crime and eventually became a boss. Though he didn’t like the “Aardwolf” name that people gave him, it stuck.

By 1993, he was an established crime lord. Since he was never heard of before or after, it seems likely that he had a quick rise followed by a big fall, but that remains to be confirmed.

The trouble with the Folding Circle

Back then, the Folding Circle was muscling in on to Madripoor’s underworld. As they gradually became a real problem, Aardwolf made openings toward organised crime leader Tiger Tyger.

Aardwolf then launched his plan, manipulating Night Thrasher (Dwayne Taylor) into coming to Madripoor to fight the Circle for him. His primary leverage was recordings of Thrasher’s girlfriend Silhouette Chord dealing with the Concrete Dragons street gang. Using these, Aardwolf told Thrasher that Silhouette had been kidnapped by the Circle as a result of her criminal activities. 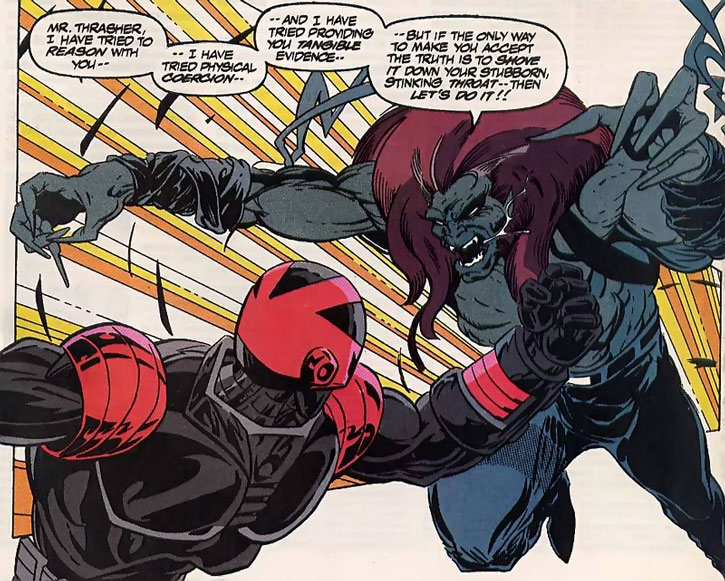 However, Thrasher refused to believe him. Then, the Folding Circle came in during the ensuing fight – forcing Aardwolf to flee. Tiger Tyger then allied with the Circle. She facilitated their capture and execution of Aardwolf.

However, as the Circle threw the bound Aardwolf off a bridge, Night Thrasher and Silhouette rescued him and faced the Circle. A deal was hammered between the factions, wherein the status quo was preserved for a time.

Aardwolf hasn’t been seen since.

Aardwolf is a smooth operator, using deceitful tactics and in love with his own voice. He talks profusely and articulately, and insists on projecting an impression of class, sophistication and intelligence. He prefers to run things from behind the scenes, although he does have a literal taste for blood.

He also enjoys expensive food, clothing, and artwork, but prefers to have his men work in Madripoor’s Lowtown.

Aardwolf is pretty good at remaining calm and in control, even when he’s completely overwhelmed. This is mostly a ploy which, combined with his feral appearance, makes everybody thinks he’s a Sabertooth-level threat. Still, he can’t really back much of his bluster and doesn’t have the power base to deal with superhuman matters.

“My namesake ? Given to me in my younger days. I found it dreadfully gauche back then. A hyena-like mammal which feeds mostly on termites and insect larvae, would you believe ?”

“Mr. Thrasher I have tried to reason with you ; I have tried coercion ; and I have tried providing you tangible evidence – but if the only way to make you accept the truth is to shove it down your stubborn, stinking throat – then let’s do it.”

Powers:
Claws: 09, Running: 05 and presumably some sensory powers such as Analytical smell/Tracking scent: 05 and Ultra-vision: 04

Bonuses and Limitations:
Claws is Contingent upon STR.

Aardwolf is barely seen in action, and his stats are thus highly speculative. 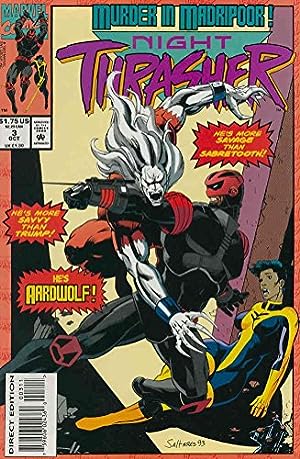 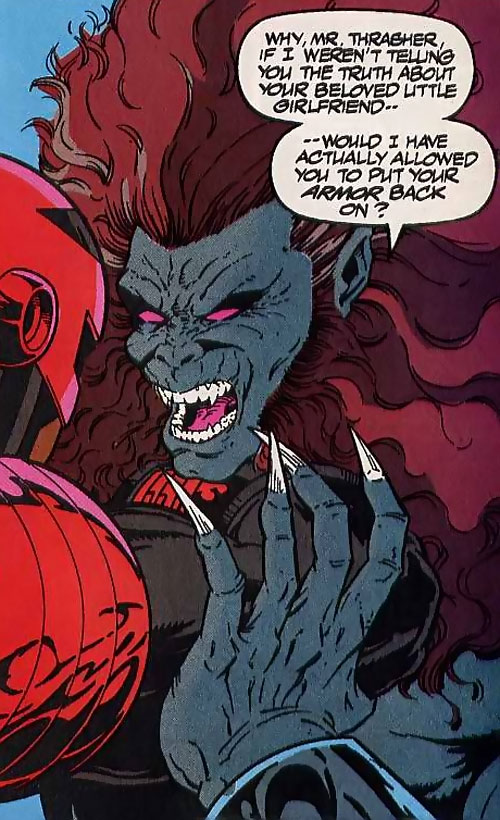