Abdullah the Butcher thrives on pain… literally. He absorbs low-level attacks and internalizes them to increase his strength, his durability, and his innate ability to cause terror in other people.

Abdullah is like the Blue Raja from Mystery Men with some subtle differences. Instead of a skinny white man with a fake British accent, Abdullah is an obese black man who, despite being multilingual, refuses to speak except through “interpreters.”

Instead of being an superhero wannabe, Abdullah is more of an Antichrist wannabe. But the thing they have in common – THEY BOTH USE DINING FORKS AS WEAPONS. Granted, Blue Raja throws them at his opponents with skill and precision, while Abdullah uses them to gouge chunks of flesh from his opponents scalp, but the similarity is there nonetheless.

Lawrence Shreeve was born in Windsor, Ontario, Canada in 1936. He created his “Abdullah” person and gained his reputation as “The Madman of the Sudan” while serving as an advisor on psychological warfare and “interrogation techniques” in dozens of conflicts throughout central Africa. This region is where he spent the majority of his career.

He also made a notable impression on the Khmer Rouge in Southeast Asia with his creative methods of intimidating the enemy and local civilians during the 1960s. During this span, he took to heart their tactics in guerrilla warfare (something which he never personally engages in, but which he does encourage in his subordinates).

By the early 1970s, he headed up his own mercenary company of approximately 60 highly trained guerrillas and terrorists. He ran the organization entirely through his right-hand-man and “interpreter” General Skandor Akbar, an exiled Egyptian officer.

It was during the 1970s that he met and “befriended” pyrotechnic and demolitions specialist Atsushi Onita. They exchanged tactics and Onita became one of the inner circle with whom Abdullah would communicate directly.

Another such confidante was introduced to Abdullah during the late 1980s… Cactus Jack. Onita was training Cactus in demolitions when Abdullah visited to purchase a supply of plastic explosives. Jack and “Abby” hit it off and Jack became a surrogate son to the Butcher.

The relationship was ill-fated. Cactus Jack, while ruthless and by no means against the taking of life, balked at Abdullah’s kidnapping and abuse of an American tourist group.

Abdullah felt that being questioned by Cactus on his decision was betrayal and had been caused by Jack’s personal feelings for one of the hostages, a model named Noelle (he was correct). The two fought, with Jack getting the upper hand, and Jack escaped with Noelle.

Upon awakening, Abdullah had the remaining prisoners executed, and began devoting his attention to gaining his revenge for the betrayal. He groomed an American meta-human with superhuman strength and endurance named Leon White as his replacement for Cactus Jack, dubbing White “Vader.”

Upon finding Jack and Noelle living quietly in Florida with their two children, Abdullah had Jack assaulted and his son kidnapped.

When Cactus regained his memory (lost in the attack), he met with the Butcher in Munich, Germany. He wanted to turn himself over to Abdullah in return for his son’s safety. The Butcher had no intention of letting either of them go, and Cactus was forced to undergo extensive abuses.

During a one-on-one battle with Vader, Abdullah attempted to hang Cactus with a noose. It slipped free, ripping off one of Jack’s ears. Jack was able to kill Vader by crushing him with an 18-wheeler, but Abdullah escaped.

He is still on the loose, continuing to run his mercenary organization and looking for an opportunity to get his revenge on Cactus Jack.

How such an overweight man has survived 64 years on Earth in a high-pressure occupation without keeling over dead is beyond me.

Add to that a forehead and body covered in scar tissue and wide, staring eyes that take on an almost orgasmic look when causing bloodshed, and you have fairly accurate portrait of the man.

When not in a fight, he wears expensive suits that are custom tailored to him. When on a rampage, he wears baggy pants, pointy-toed boots, and no shirt.

Intimidating even when not in battle, Abdullah only speaks directly with a select few. He will mumble unlikely gibberish at his interpreter, Skandor Akbar, who will then translate it into English for other parties present.

When in a fight, Abdullah pulls no punches and tries to draw as much blood as possible as quickly as he can.

See the Cactus Jack write-up. Other than that… you figure it out yourself. He’s good for just about anything that doesn’t take too much sensitivity or subtlety. Have a storyline where you want something dead in a big, ugly, bloody way – he’s your man.

Connections:
Terrorist Organizations All Over the World (Low to High), Atsushi Onita (High), The Sheik (Low).

Source of Character: 42 years of wrestling around the world & Wrestling Museum . 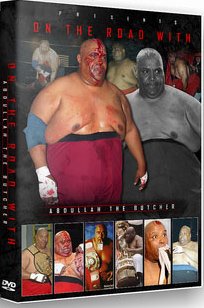 On the Road with Abdullah the Butcher 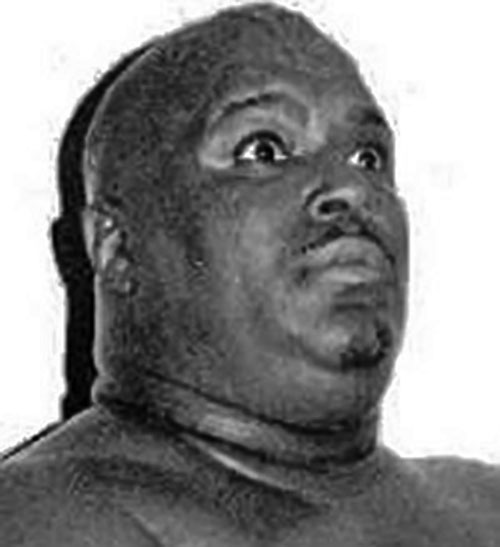 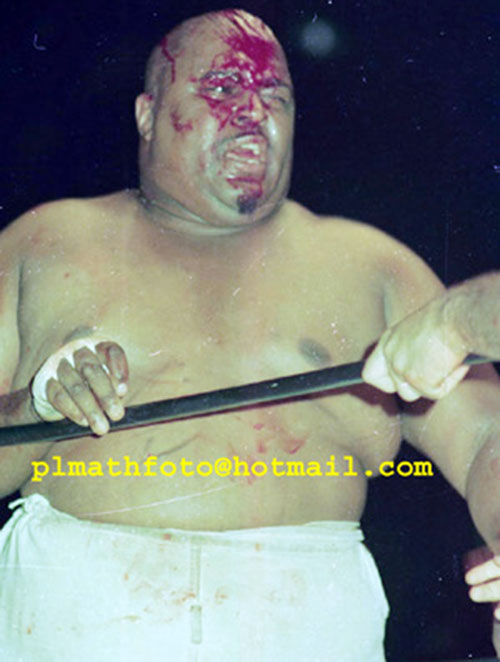