Abner Cadaver is over 10,000 years old and immortal. He is a cunning master of the occult with millennia of experience. He is acknowledged as a Master of the Mystic Arts and possesses numerous, powerful magic abilities.

First, he can animate dead matter and use it as his physical host body. Such an undead body consists of sewn-together body parts. If his body is destroyed, his spirit can animate another corpse as he sees fit. Wherever he picks up a body part for his new host body there will be left lots of maggots.

He has presumably existed throughout the millennia in various animated bodies, but is not capable of resurrecting others. The sewn-together body parts can separate from another according to Cadaver’s will to do his bidding. This is most often seen as he casts spells, allowing him more complex gesturing than mortals are capable of.

Second, he is capable of manipulating enormous energies. He can temporarily boost the abilities of his teammates to extreme degrees. By focusing for some time, he can also enhance his other magic abilitiess. His most dangerous ability might be to decrease the strength of molecular bonds to completely dissolve matter, living or non-living.

Third, he has certain psionic  abilities. These allow him to hover and levitate as he sees fit. He can also open portals and transport groups of people over long distances. By mental power alone, he can mentally communicate over short distances.

And last, he has access to thousands of spells, allowing him to create nearly any effect desired. This effect is somewhat taxing, but powerful. By contrast the most common effects described above are part of his routine, non-taxing bag of tricks.

For over 10,000 years, a battle between good and evil involved two powerful mystical entities. The sorcerer Fon~Ti dedicated himself to destroying his nemesis, Abner Cadaver, a sentient length of villainous twine. This war has seen each opponent gaining the advantage temporarily, keeping the other in check.

The most recent victory saw Abner Cadaver’s creation, the Wicked Worm, duplicate itself into the hundreds. These leeches then possessed a weakened Fon~Ti. The sorcerer’s energies allowed a new life form to emerge, Horde. The master and apprentice then set about establishing a power base within the superhuman-infested city of Chicago, Illinois.

Horde was used to take control of the resurrected and mentally unstable CyberFace. This criminal was then manipulated into seizing leadership of the Vicious Circle. This popular and powerful supervillain was the ideal pawn so that Abner Cadaver and Horde could remain in the background, manipulating events from afar.

Abner Cadaver first rose to prominence within the Vicious Circle. He posed as a trusted lieutenant of CyberFace, his colleagues having no idea of his true status. He attempted to extend the life of his puppet further by draining off the life energies of the Undead and instilling it within CyberFace. But that only made him dangerously unstable. 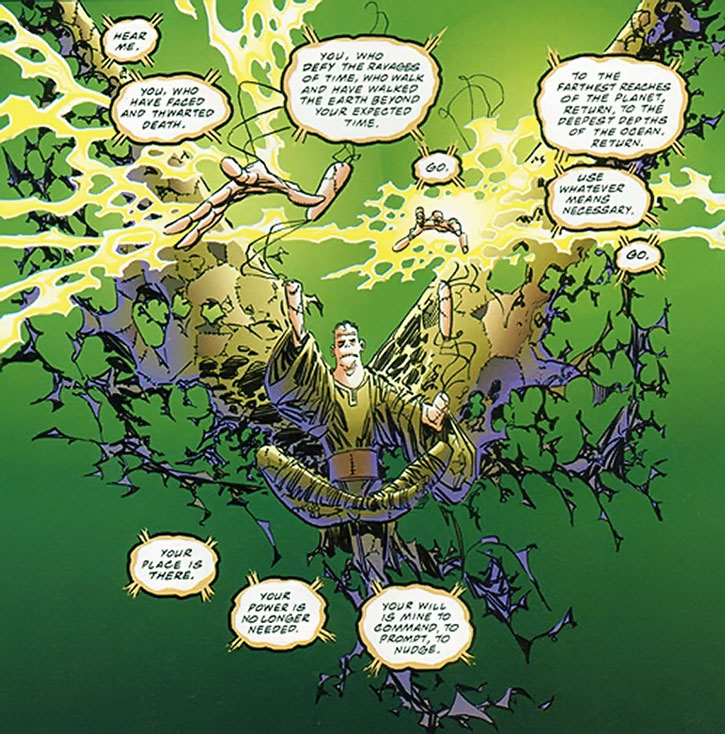 After the Savage Dragon killed CyberFace, Horde stepped in as the new leader. Abner Cadaver again was by the leading crimelord’s side. But Horde suffered the same fate as his predecessor. This caused Abner Cadaver to move in to kill Dragon himself. William Jonson halted this murderous spell, and Barbaric proceeded to crush the head of the villain.

But the threat of Abner Cadaver continued. His latest host body meant nothing to him in the grand scheme of things. He merely built a new body using parts of various dead superhumans. He then went to finish off Dragon. But by then, Fon~Ti had sufficiently recovered. The restored mystic disintegrated his arch-enemy’s body. That sent Abner Cadaver into hiding.

He never returned and was presumed killed when Universo consumed the Earth.

Abner Cadaver is a sentient maggot-infested length of twine. But he presents himself as a zombie with rotting skin and his mouth sewn shut.

Both the body and its clothes usually consists of sewn together mismatched parts. Since he can return after his host body has been destroyed, the body’s details will often change from encounter to encounter.

When Abner Cadaver casts spells his limbs will often separate to float around in the air. They’ll be held together only by fabric and wiring.

His body language and movement pattern is odd and unnatural making a spooky effect.

Abner Cadaver is a sentient length of twine. His motives are utterly alien. He is evil by nature and is constantly in struggle with his good counterpart, Fon~Ti. Both magicians seem to prefer to work through proxies, such as Fon~Ti’s creation Mighty Man, the hero.

Abner Cadaver recently got the upper hand in their eternal struggle. He encased Fon~Ti in multiples of his old creation, the Wicked Worm, an old Mighty Man foe. This allowed the creation of a new villain, Horde.

In this tradition, Fon~Ti and Abner Cadaver use empowered champions to combat each other.

Cadaver is not prone to displays of power. Although immensely powerful, he prefers to downplay his own might. He likes to keep opponents off-guard and then to go in for the kill whenever least expected.

Also, somewhat of a coward by nature, Cadaver prefers to stay in the background casting spells. He will step in, well prepared and enhanced, if the situation requires a more direct offensive effort.

If his current body has the strength, he will sometimes go for a direct physical attack. Such as when he possessed the body parts of fallen gods.

Abner has lived for millennia and does learn from his mistakes. He has probably learnt all his magic from trial and error efforts.

He tries to make certain not to make the exact same mistake twice. For example, he was ambushed from the back while he tried to disintegrate the Dragon, leading to his defeat. The next time he attacked the Dragon in exactly the same fashion, he checked his back for ambushes at the right time.

“The name is Abner Cadaver. Undead master of the Mystic Arts. Horde was but a pawn.”

“You’re dissolving, Dragon — dissipating — your very atoms are being pulled apart and scattered to the winds. There will be no healing from this wound, Dragon ! It’s over ! It’s over !”

(Casting a summoning ritual) “Hear me. You, who have faced and thwarted death, You, who defy the ravages of time, who walk and have walked the Earth beyond your expected time. Come. From the farthest reaches of the planet, from the deepest depths of the ocean come. Use whatever means necessary. Come. Your place is here. Your power is needed. Your will is mine to command, to prompt, to nudge. Come.”

Abner Cadaver is probably an early, failed experiment of the Lords of Chaos.

Cadaver might, in fact, be Shazam’s (instead of Fon~Ti’s) opposite number. He would have fought Shazam and Captain Marvel through his proxy, Mister Mind. He could have, at one time, been an ally of Black Adam.

Abner Cadaver could also recently have been working behind the throne of Black Adam’s Kahndaq in some fashion.

Rituals:
Abner Cadaver reportedly knows hundreds, perhaps thousands of rituals. These are mostly related to energy and matter manipulation (as given by his Scholar), although he seems to prefer the use of a smaller set of abilities (as given by his Powers).

He has sometimes employed a group transportation ritual, and also cast summoning rituals. But he has never been seen carrying any ritual components.

It is very likely that he regularly employs a Mind Blank ritual to keep him from being found and detected by his arch-enemy Fon~Ti.

The return of Cadaver

After the then-current body of Cadaver (above Physical Stats) was destroyed by having its head crushed (Savage Dragon #50), Cadaver found a good host alternative in the body of a recently deceased god. This animated body was combined with the severed arms of the Dragon.

This very muscular and powerful body had the higher Physical Stats of DEX 10, STR 13 and BODY 10. Cadaver was fond of using this physical strength.

Fon~Ti is Abner Cadaver’s primary nemesis. They frequently oppose one another, and the Arch-Enemy, Fon~Ti, is linked to Cadaver’s origin in some significant way. When Fon~Ti appears in the campaign and what his goal is at any given time is up to the GM. Cadaver doesn’t get HPs for fighting Fon~Ti directly, as it is assumed that he received them “in advance” for taking the Drawback, but still receives the standard HP awards for the adventure as a whole.

For example, if Cadaver and several members of the Vicious Circle went through a scenario where the group battled Fon~Ti Cadaver would not receive the HPs for defeating a powerful foe, but he would still receive the HPs for succeeding in his goals and successfully completing the adventure. Because of this, Cadaver will mostly attempt to flee when confronting Fon~Ti, to save time and energy.

The GM might, in addition, decide that the Drawback also extends to the proxies of Fon~Ti, such as Mighty Man, in that Cadaver will only receive half the normal HPs for defeating him. The Arch-Enemy Drawback should also be considered when awarding HPs for role-playing during the session.