Gamemasters have worse choices when casting muscle for the opposition. Assuming that one de-emphasises the sexist crap, but then that goes for nearly every single thing about comic books.

The Abominatrix is presumably a gamma mutate , given her green skin tone and strong similarities with the Abomination. She does evidence gamma-type powers – vast superhuman strength and durability, the ability to perform gigantic jumps due to the sheer power of her legs, ignoring temperature extremes, etc.

As such, the Abominatrix could engage the She-Hulk in hand-to-hand combat. On one hand, her odds of victory weren’t good due to the She-Hulk’s superior experience, technique and strength. On the other, the Abominatrix fought competently, thought on her feet, was largely fearless and was pretty resourceful.

The Abominatrix prefers to use random large objects, such as girders or cars, to hit her opponents with. Such items will almost certainly get totalled by the impact, but it’s easier to hit people when wielding large objects and she doesn’t care about the collateral damage in the least.

Plus, using random items often inspires her to come up with bad one-liners about what she’s using to hit people.

The Abominatrix is very good at landing feet first on an opponent after a long, powerful jump from far away. She often takes her opponents by surprise that way.

The Abominatrix was an employee of the savings & loans company of Jake Keaton. After the S&L deregulation of the 1980s , Keaton aggressively invested in a number of risky businesses to boost return rates. 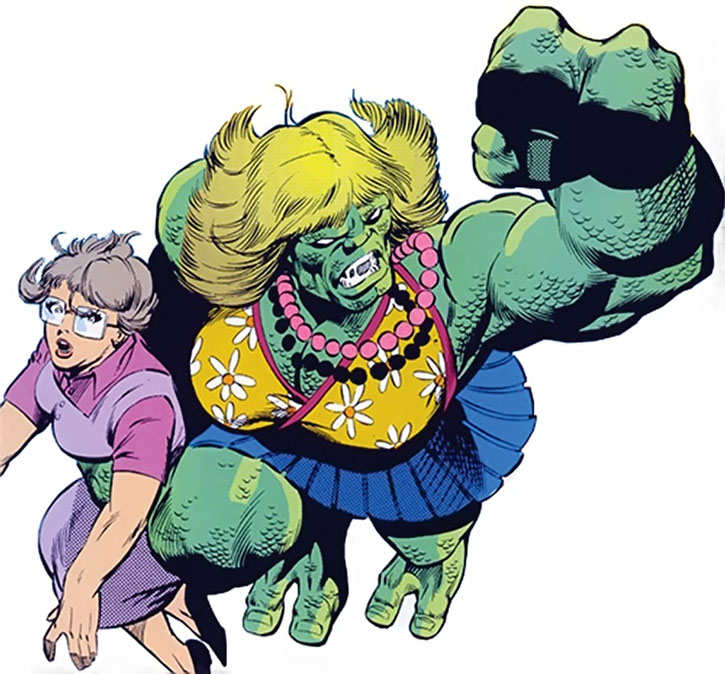 Given Keaton’s interest in less-than-ethical means to enforce his political ideals, he particularly invested in biotechnology research. The intent was to turn some of his employees into superhuman agents.

The main product of the Keaton-financed research was Captain Rectitude. But another success was unexpectedly obtained during research about moderating the symptoms of premenstrual syndrome . This research likely employed gamma ray exposure on selected subjects.

On one of the subjects it completely backfired, leaving the hapless subject in a constant state of PMS. But it also had the unintended effect of turning her into a gamma mutate. The subject would be code-named “Abominatrix” based on her looks, similar to those of Hulk foe the Abomination. 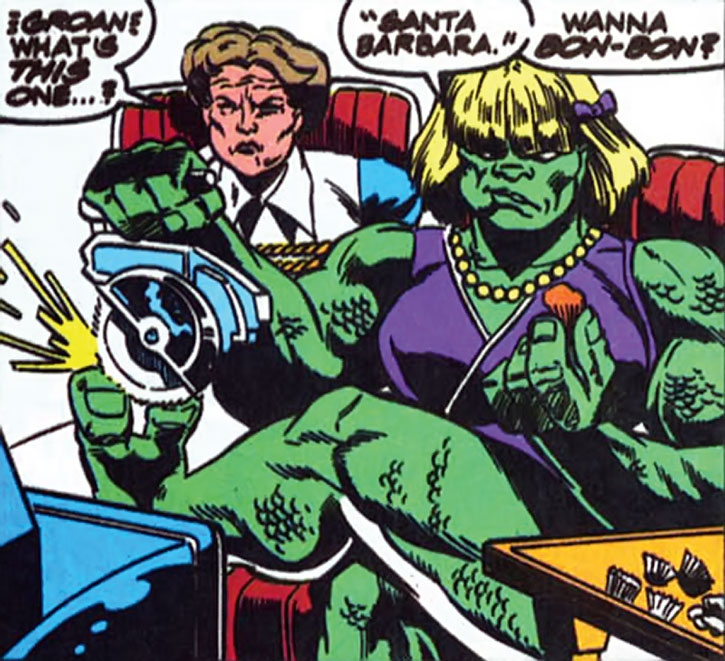 The mutated employee faithfully served Keaton as an enforcer. She never cared about the details of her less-than-legal activities due to her general crankiness and lack of interest toward subjects not related to her everyday life and TV-watching habit.

Bring your lawyer to the slaughter

The Abominatrix once kidnapped the elderly Louise Mason, who during the second World War had been the Blonde Phantom. Keaton wanted to work Mason for information about a lost nuclear warhead.

Keaton’s plan to nuke Las Vegas brought him into conflict with the sensational She-Hulk (Jennifer Walters). He detailed both Captain Rectitude and the Abominatrix to stopping the glamorous gammazon. Despite their power and persistence, the long-legged jade giantess prevailed and foiled Keaton’s mad plans, destroying his headquarters.

The Abominatrix has not been seen since, which is good since there are only so many corny kennings I can use about She-Hulk.

The Abominatrix is apparently in her late 30s or early 40s (though it’s hard to tell). She was left in a permanent state of tiresomely painful PMs. Thus she’s cranky, would rather be left alone, finds it hard to focus at length and is irritated by everything.

The Abominatrix’s two main means of dealing with her state of permanent discomfort are a/ constantly eating bon-bons when not in the field and b/ spending much of her day watching an unending stream of soap operas.

She’s a huge fans of those and they’re pretty much her life. She hates missing an episode of any of her favourites, and when on a mission will take out her frustration of having to miss an episode of Santa Barbara  on her targets.

(Of course, nowadays TV series are huge for everyone, and no longer seen as pabulum for contemptible herds of addled homemakers. Which makes the character works even better, as the combat gets derailed into a heated discussion of the latest Game of Thrones season or whatever is super-popular when you’re reading this.)

She also likes filing her nails and doing pedicures, though it takes high-end power tools.

The Abominatrix tends to call all women “Trixie” – perhaps she’s originally from Chicago. Presumably she has a similar all-purpose nickname for men.

“So what happens ? I gotta miss Guiding Light , that’s what !”

“‘Sensational’ She-Hulk, my foot ! My third husband was tougher !”

“I take my daytime dramas seriously. So far Trixie, dealing with you has cost me three episodes, plus a two-buck call to the Soap Opera Hotline to catch up !”

“You can call me the Abominatrix ! And I’m not fat – just big-boned !”

Drawbacks:
Distinct Appearance, SIA toward surliness and making cranky comments about people around her (except her boss), SIA toward watching soap operas.

The stats assume broad similarities with the classic Abomination, even where not demonstrated. 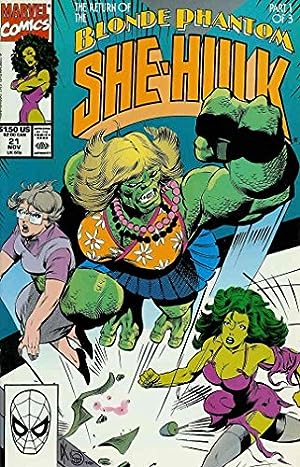 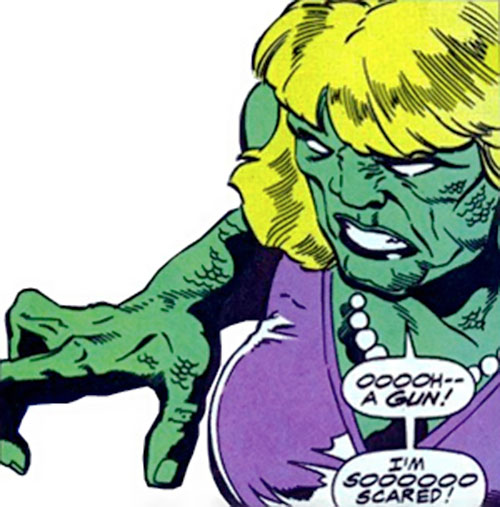