Ace is a sort of double of Peter Parker – who Spider-Man might have been if he had been a young Black man growing up on romanticised mean streets controlled by youth gangs, and how different his ethics would be.

Ace is a superhuman – he’s able to fight with Spider-Man on nearly equal standing. He’s incredibly hard to hit. Spider-Man found himself increasingly frustrated as he kept swinging in the air, and he was as hard for Spider-Man to hit as Spider-Man himself is for most of his foes.

He seems both able to sense the intentions of others before they move, and to neutralize equivalent abilities in others – such as Spider-Man’s spider-sense. He will often just stand there and dodge for a little while, letting his opponent look like a sucker while he sidesteps attacks before they are even launched.

Ace is also superhumanly fast, and has great acrobatic agility.

Ace has an impressive presence and aura of cool. He very quickly acquires a reputation, people tend to stop whatever they are doing when he comes in, he gains respect just by standing there. He gets a huge impact just by entering a room, even if said room is a tribunal in session.

The gangs, the police, the press – nobody disses Ace. Spider-Man was somewhat jealous of the sheer respect Ace got.

“Ace” Spencer was raised in a tough part of New York City, an area dominated by street gangs. During his teenage years, he financially supported his kid brother, his baby sister and his mother, a former dancer who had become bedridden. He also led a local gang, the Reapers.

One of his early influences was an unnamed Việt Nam war veteran, a Black man who had lost both his legs and nearly died during the war. The vet taught Ace what he saw as valuable lessons he learned too late. Don’t get involved. Don’t ever fight another man’s fight. Stay aloof. Keep your mind on your own business.

The vet said he taught Ace so well that if he were to be mugged in the street ten yards away from Ace, the youth wouldn’t lift a finger to help him.

Ace eventually left the Reapers to mind his own business. He didn’t interfere in gang business in his old hood – but, by the same token, didn’t let outsiders interfere with local gang business, even if that meant driving them out violently.

When his brother Lorenzo and another Reapers member shot down several members of the rival Dragon gang as well as a hapless bystander a few dozen meters away from him, Ace didn’t react.

When reporter Joy Mercado came looking for him along with photographer Peter Parker, Ace drove them out of the turf. However, he soon found himself fighting Spider-Man. Their fight was interrupted by a retaliatory attack from the Dragon gang on the Reapers.

Spider-Man broke the fight, while Ace refused to intervene. In the fray, a Reapers kid was shot in the head before Spider-Man could save him. Spidey angrily berated Ace, lecturing him about responsibility, how he could have saved this kid’s life – and how it could have been a loved one instead of just a gang kid.

Ace’s testimony sent several gangbangers to prison – but he was too tough and respected for the gangs to take him down.

Ace began to sell protection in the area. For a modest sum, he’d keep an eye on local businesses and throw out any criminal attempting to rob them. The various small stores found his services to be quite a boon. For a time, it seemed that things might change for the better.

However, fate struck – Ace’s mother died in his arms from her condition. Her death also meant that his sister would end being sent to a placement home by the social services, as they had threatened numerous times.

The trial of Ace’s brother went wrong. His brother’s lawyer attacked Ace’s credibility, and Ace left rather than hear the garbage thrown at him, knocking out two cops who tried to bar his way. He had tried the Man’s way, and it didn’t work.

Shortly after those events, Spider-Man caught up with him. Parker was jealous of the respect Ace was getting, and found himself looking for an excuse to hit him. The social services inspector told him Ace had kidnapped a girl, without telling him it was his own sister, and Spider-Man attacked Ace in front of the cheering Reapers.

For a while Spider-Man couldn’t connect with Ace. But he eventually managed to knock him down with a particularly fast volley of punches. Ace’s sister, Rose, intervened, asking Spider-Man what his problem was and why he was fighting on behalf of the Reapers. Ace then got up and stabbed Spidey in the heart.

Everything we leave behind

The “blade” he had been using was a theatre prop, though – the blunt blade retracted in the handle. Ace just wanted to score coup and show Spider-Man he could kill him. He then turned his back and walked away, ignoring a Reaper who was drawing a bead to the back of his neck. This forced Spider-Man to disarm the Reaper to save Ace’s life.

At that point, it was clear things were over. Ace left town with his kid sister Rosie, leaving Lorenzo free to restart the war against the Dragon gang and let things degrade again the way they always had been.

Ace has not been seen since.

Ace has the face of a young Prince  (circa the Purple rain and Around the world in a day albums), and a wardrobe inspired by Michael Jackson  during the 1980s (the Bad and Thriller albums). He’s tall and strong, with hollow cheeks.

Ace harkens back to the tradition of the silent, ultra-cool tough guy of the 1980s. He talks very little, and tends to be monosyllabic when he does. He can be very articulate if he wants to, but he’s so cool he can only be arsed  to talk when it’s important, you see.

He does his best to stay cool and impassible, displaying very little emotion. He’s the 1980s iceman. With large sunglasses and post-disco flashy clothing.

Ace is an outsider. He’s always lived on gang turf and operates by street rules. The Man’s rules are simply not for him. While he’s incredibly streetwise, he cannot operate in the normal world, without hierarchies based on rep and strength, and specific gang turf non-verbal communication.

Ace tried to play by the rules of the system, and it ended in an unmitigated disaster. He has rejected the Responsibility motivation Spider-Man briefly gave him, and is probably back to his “never get involved” policy.

“Yeah, they’d listen to me. But they’re on their own. It’s their war, not mine.”

Bonuses and Limitations:
Acrobatics (Evasion) is a Powered Skill and is Contingent on Danger Sense.

That means both serious perceptive abilities (reflected in his Attributes) and a knowledge that some guy called Parker is Spider-Man. 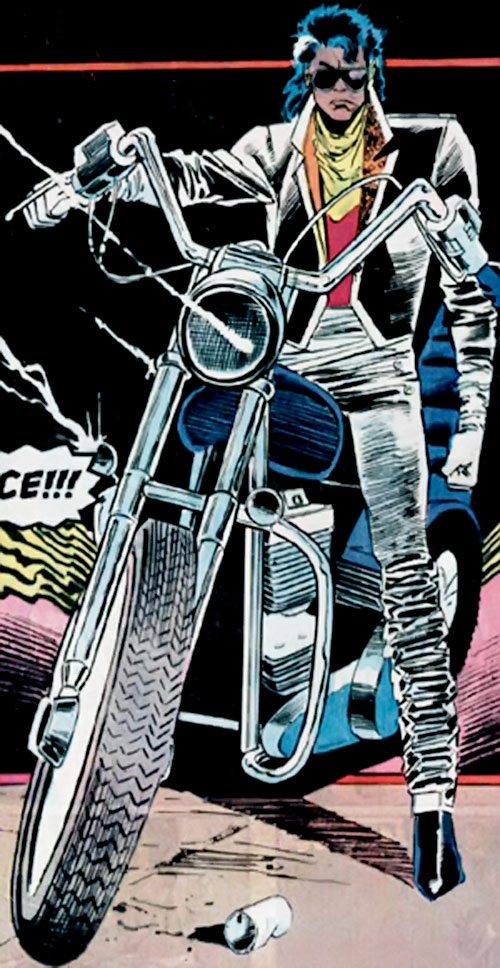 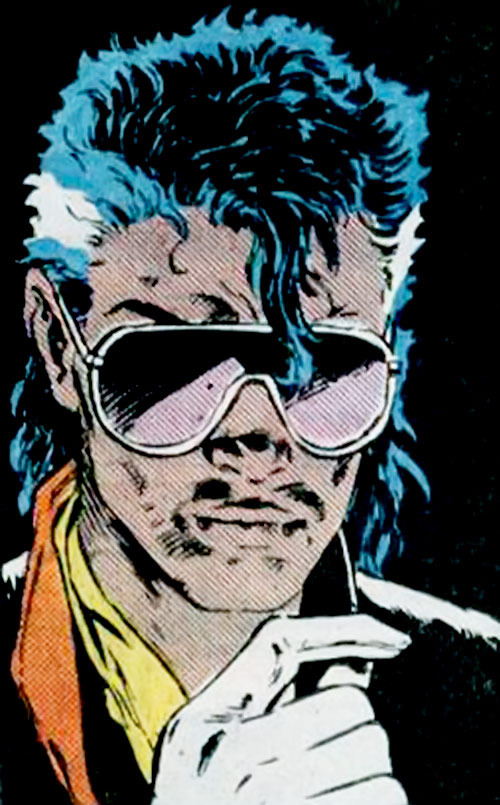