However, his main weapon is his ability to convince people to do what he wants. This is usually done by preying on existing economic, ethnic or religious tensions in an area.

The true name and history of Achebe are unrevealed. But the most persistent story is that of a Ghudazian farmer whose farm played host to rebels from neighbouring Ujanka. He offered food and care as they recovered. They repaid his kindness by burning down his farm, stabbing him 32 times, and leaving with his wife, who’d fallen in love with the rebel leader.

He didn’t die, his hatred keeping him going. Achebe then allegedly made a deal with the Devil. Recovering, he sought revenge on his wife, but didn’t go after her, since that would have been too easy. Instead he went after her parents. He went after her brothers, their wives and children. He went after her sisters and their families.

He burned their houses down, and stabbed each 32 times. Then he went after her friends, her teachers, everyone who knew her, down to a merchant who had once sold her shoes.

Enemy of the State

What is known of Achebe is that he attended Yale , gaining multiple degrees in psychology, politics, and divinity. He also made connections with elements of the US intelligence community. He had particular ties with spooks involved with XCON. This in turn meant Russian Mafia and Volcan Domuyan secret police connections.

He returned to Ghudaza shortly before ethnic tensions caused a civil war to break out. Indeed, some have drawn a link between the events. He ended up in a refugee camp in neighbouring Wakanda, where he began fomenting trouble between the refugees and natives.

When XCON lured Black Panther (T’Challa) to America, Achebe used the assets they, and Mephisto, had provided to take control of Wakanda. He retained control even after T’Challa beat Mephisto and forced him to relinquish his interest. Howbeit, Achebe’s sanity did seem to deteriorate after this.

T’Challa continued to wreck havoc on XCON, taking out most of their agents responsible for the action. Then he returned to deal with Achebe. After unleashing Wakandan war machines on the civilian population, Achebe managed to capture T’Challa in a ridiculous death-trap within the palace. He’d wired everything to blow, giving him time to escape.

He hid out in an abandoned village for a while. When T’Challa’s disgraced Dora Milaje, Nakia, crash-landed there, Achebe tortured her a while. Then he lost interest and moved on.

When Erik Killmonger beat T’Challa and assumed the Black Panther identity, Achebe hired Deadpool to steal Killmonger’s pet leopard, Preyy. He hoped to draw Killmonger out so Deadpool could kill him, which would get Achebe his playmate T’Challa back in the costume.

It didn’t work out that way, so Achebe killed Preyy and fled.

Dangerously deranged, the manically cheerful Achebe has become fixated on T’Challa. This may have been a side effect of his breaking the connection with Mephisto.

While he always seemed to exult in causing conflict, since losing this connection Achebe has become more mercurial. He kills people for no discernible reason. He argues with his hand puppet, Daki (even threatening to shoot it).

While he has little fear of anything, he’s not stupid. Therefore, Achebe stays back from the actual fighting most of the time, always slipping away and evading capture.

Achebe: “So the rumour is true, ukatana [Zulu for kitten]. No good deed does go unpunished.”
Black Panther: “This is a time of great turmoil. Ignorance and fear are easily exploited.”
Achebe: “Which explains me. Erudition and elitism are easier to exploit. Which explains you. The mighty ukatana — fetish god of the fat, the spoiled, and the self-absorbed. T’Chaka must be getting a little chafed from all the 360’s he’s turning in his grave.”
Black Panther: “What do you want, cleric ?”
Achebe: “Peace, of course. And maybe one of those mini-disc players. That’s it, ukat, I’ll sell out my countrymen for the new Wu-Tang Clan CD . Let’s shake on it.”

“…and after a national day of mourning, I am proclaiming Biscuit Day ! Eat nothing but biscuits from dawn to dusk — and get a free car wash.” 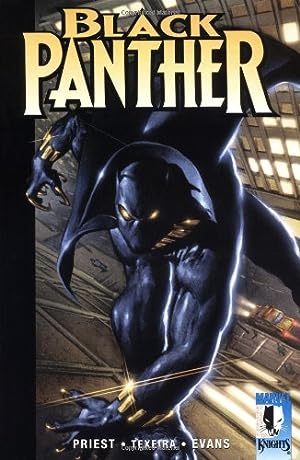 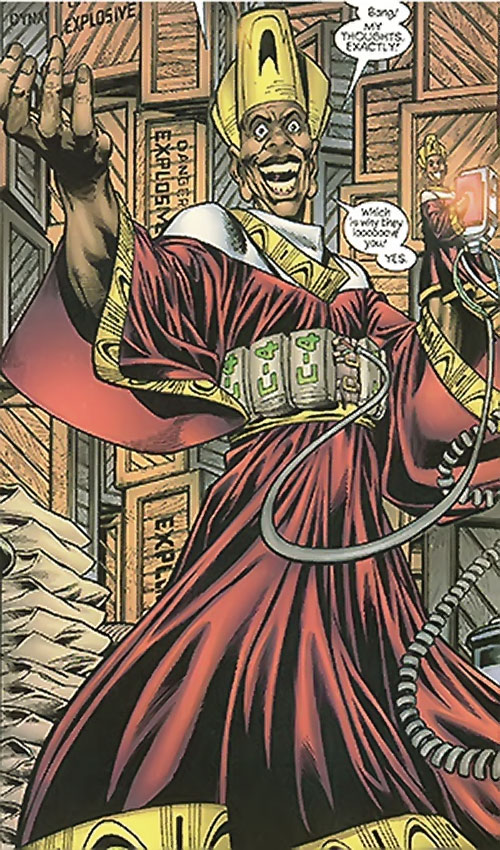