Acid is a top flight chemist who has trained his body to be a decent athlete. His super power is to fire acid of varying strengths from holes in the fingertips of his custom made gloves.

His gloves have tubes which are attached via deep line tubes into his blood stream. His blood has been chemically modified so that when a valve opens to let it flow into the gloves it becomes the piercing, burning acid he is known for. The acid itself is modifiable by him to just sting a little to burning through steel.

If the one way valves were to ever be reversed the acid (which is only made by mixing his blood with the chemicals in his gloves) would burn him from the inside out.

Since the Acid power uses his blood, the more acid he creates and uses, the more it drains him. Similar to how donating blood may leave a person tired. Using too much could potentially kill him. He needs recovery time and lots of liquids.

He also keeps a fairly large stock of his own blood in frozen storage at the Challenger’s head quarters.

George Burton grew up introverted. His passion from a young age was science. He met Linda in his last year of college and fell in love. Unlike his many crushes before, Linda gave him a chance and found the sweet, caring man others did not see.

George pursued his dream of being a chemist. He then continued on at the University after he graduated. Going on to get his Masters, then PHD.

George found himself excelling as a teacher and researcher. He married Linda and his two children quickly followed. Then came a big break in his career, George got to work alongside other top scientist in experiments with “electric cells”.

It appeared to be a military project to him but Kyle Herstein, who later came to be known as the hero Blitzkrieg, was altruistic in the endevour.

After a successful experiment with Blitzkreig it appeared all was well. However, after several further experiments resulted in fatalities, the research facility was destroyed and all their work with it. George began to resent the fact that Kyle got to have powers and no one else.

Later, George went back to his lab work, and working for days even at the expense of his family, came up with his Acid producing gloves. Even though Acid knows Blitzkreieg’s secret identity, he would never reveal it.

George has a fairly unassuming and “clean-cut” look about him. He wears his hair short but long enough in the front to comb over. He wears long sleeved shirts and kahkis with dress shoes. Over this he wears the stereotypical white lab coat, open of course.

As his alter-ego Acid, he wears a yellow and brown skin-tight outfit and mask with burnt sienna colored gloves. A large “A” covers his chest and another acts as a buckle for his belt.

It can be said that Acid has an acidic personality.

Self-designed, originally motivated to do good, but became somewhat disillusioned of the role of hero after getting started. He wanted to help the innocent and so invented the acid formula. He feels disappointed in people but hasn’t yet given up completely on there being some worth saving…but almost.

George is an “Upholding the Good” character. But he has fallen into the Responsibility of Power category because of his disillusionment with mankind.

He often makes rude, unfounded comments even to his closest friends. For example hinting that Blitzkrieg chose his name because he is a Nazi; or referring rudely to Carnation’s tight clothing. Even his marital life is on shaky grounds.

Even though Acid is not well liked even by his own teammates he has shown to be very responsible and a trusted member of the Challengers and dedicated to their cause.

“I saved a woman from a mugging just last week… tonight I see her on the news being arrested for stabbing her grandmother. Am I doing any good really ?”

“Well I have to be a superhero. I can’t rely on these guys (referring to other Challengers) to do the job. Can I ?”

“I think Blitzkrieg is a secret Nazi !”

“I’ll do what I have to do, after all I invented the acid just so I could help people. I just didn’t realize what idiots people were then ! Still I’m stuck with the job and there has to be a couple of good people somewhere… maybe.”

Acid and the Challengers can be inserted as is in one the many cities needing heroes!

A 483 points Character (without equipment)

Equipment:
ACID PRODUCING GLOVES [BODY 04, Acid: 13, Chemical Attack: 05, R#2, Cost: 80, Bonuses & Limitations: Chemical Attack may be used with Area Effect (+1), Acid and Chemical Attack are Fatiguing -2]. To adjust the AP level of the Acid, George only needs make the adjustments to his gloves which can be done by spending an automatic action (-1). 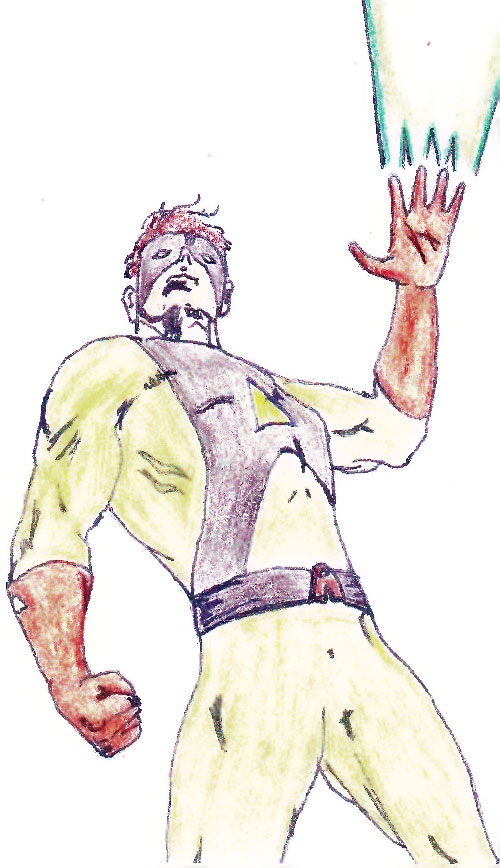 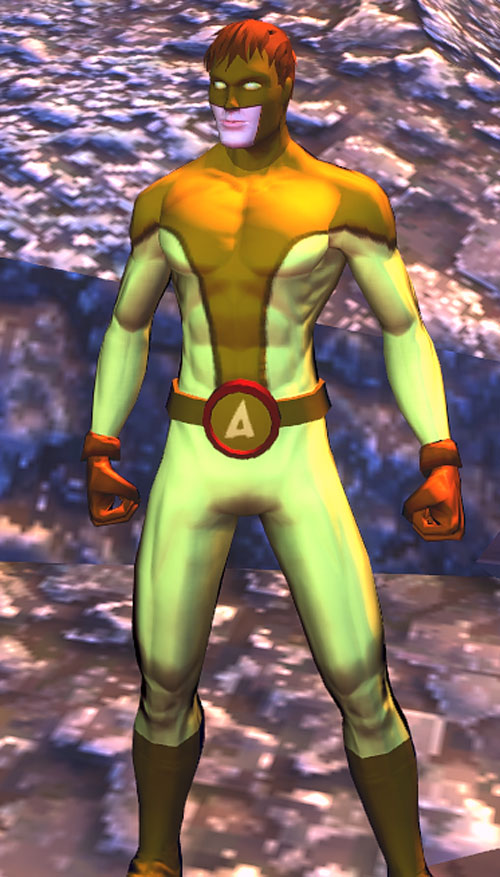