Generally he’s fast on his feet – both physically and mentally.

Where the Acrobat got his high-tech weapons and vehicles is unclear. But I wouldn’t be surprised if he had been the first client of the Tinkerer. If so, Zante presumably got excellent rates on the Tinkerer’s wares as the gadgeteer  established his rep.

The Acrobat struck during the first few months of existence of the Fantastic Four. Back then, the Human Torch (Johnny Storm) was even more of an immature hothead. Thus, Zante easily convinced the youth that Reed Richards was exploiting him and that he was by far the real star in the FF.

The impulsive Torch accepted the Acrobat’s offer. Johnny even made himself a Torrid Twosome uniform out of unstable molecules to match his new partner’s.

The Torrid Twosome’s name may have aged badly, yeah

The Torrid Twosome rushed into action to prevent a bank robbery. But just after Johnny burned through the safe, he realised there weren’t any robbers. He was double-crossed by Zante who took him out and absconded with the loot.

However, Sue Storm, who had invisibly followed them, called on the remaining Fantastic Four. Together, they stopped Zante. The Torch, who had been shot in the arm by his “partner”, caught the fleetly fleeing felon. He then rejoined the FF.

A scam with America

Zante next resurfaced with a daring, clever scam. He posed as legendary war hero Captain America, who had been missing for years. Then, he made an appearance at the Glennville Antique Auto Show (back then, the Storms lived in Glennville).

“Captain America” even spectacularly “foiled” the daring theft of a priceless automobile. Of course, the criminals Zante stopped in Captain America-like fashion were his accomplices. When the Human Torch intervened along with his childhood idol, “Captain America” told him to beat it and stop attempting to steal the spotlight from him.

“Captain America” then easily robbed a bank, using a distraction. He clashed with the Torch again. Zante managed to escape from and even briefly defeat the young hero. But soon the Acrobat was stopped, unmasked and arrested.

The actual Captain America later resurfaced. When the Torch heard that Zante had escaped and was trying to rob yet another bank, he called Captain America. They hunted Zante down. Meanwhile the Torch recounted Zante’s scam, and how the people of Glennville fell for the deception as they all wanted to see Captain America.

When they eventually cornered Zante, the Acrobat nimbly evaded them. But Captain America was so annoyed that people had actually mistaken a two-bit crook for him that he pumped Hero Points  into an awesome shield throw with multiple ricochets. He took the Acrobat out in one blow.

The Acrobat is a beatnik  – a wealthy beatnik. He always goes for the flashy flair, warm brilliant colours and European style. Of course, he wears a beret and smokes imported cigarettes.

In fact, during his very first appearance he wore… a raspberry beret , marking him as a man of taste and distinction.

The Acrobat comes from the circus world. Thus he tends toward the grandiose, self-confident banter. This is doubly true when he presents himself as the world’s greatest acrobat.

A true thrill-seeker and hedonist, the Acrobat enjoys coming up with clever plans. These will often exploit the credulity of crowds and youths like the Human Torch.

Yet, the Acrobat enjoys action more than he does deception. And he enjoys being the centre of attention even more.

He could have tricked any of the Teen Titans back in the days, really… Kid Flash being the most obvious victim.

Sue Storm : “Now I’ll leave you two alone for your man talk !”
Acrobat (executing a somersault) : “Ah ! Now to business ! I, Carl Zante, am… the world’s greatest acrobat !”
Johnny Storm : “Say — that was real sharp !”
Acrobat : “And you, fire-boy, are sharp too ! But Mr. Fantastic is taking advantage of your youth and innocence ! He is exploiting you !!”

Acrobat : “And now, for my offer ! I’m here to ask you to leave the Fantastic Four and team up with me ! With your flame and my acrobatic skill, we’d make an invincible pair of crime fighters ! I can see it now… the Torrid Twosome ! We’d be a great success and we’d divide everything equally – glory, money, everything ! You’d become richer and more famous than you ever were before !”
Human Torch : “Golly, I never looked at things this way before !”

“This Ferrari will outrace almost anything on wheels ! So get going ! And remember… be sure to be seen ! I want as many cops as possible chasing you !” 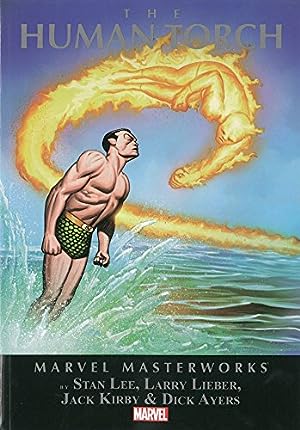 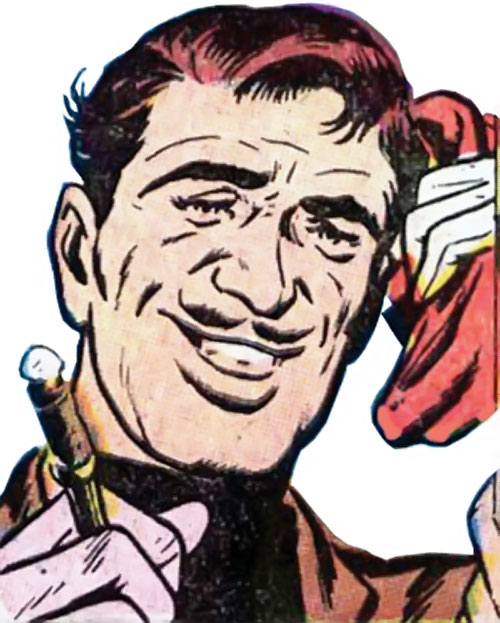 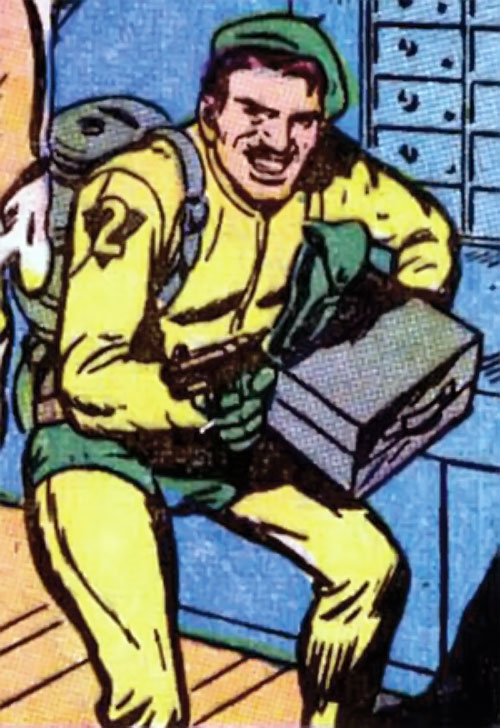 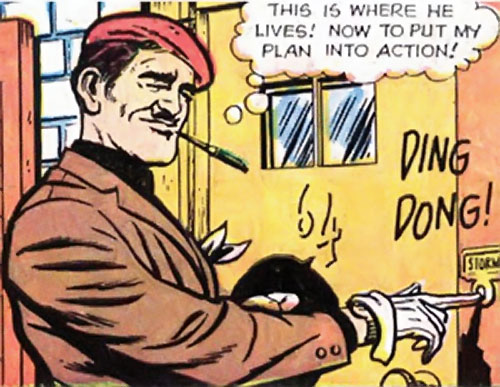 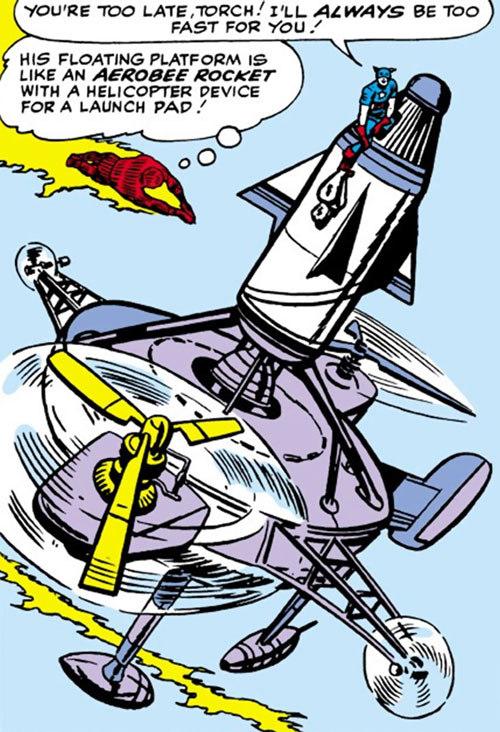