Though she has no super powers, Action Girl is nonetheless an effective crime fighter. She’s best known for her impressive gymnastics skills, and does a lot of jumping, tumbling, etc. in combat. She’s also a decent hand-to-hand fighter.

But Erica’s greatest asset is her ability to think quickly and creatively under pressure. She often finds clever ways to incapacitate a more powerful foe, as when she escaped a pounding from “The Specialist” by handcuffing her to a ladder.

Action Girl’s exploits have made her something of a celebrity in her home town, and inspired other young women to follow her example.

Many of the crimes Action Girl takes on are small-scale (vandalism, etc.). But she has also fought genuine super villains like The Terror Jocks and The Go-Girl Gang.

Erica is a pretty teenage girl with short blonde hair and multiple piercings in both ears.

She often wears tights of various colors, and occasionally sports a pair of goggles.

Action Girl is a particularly upbeat and outgoing person, always trying to keep a positive outlook in all situations. She’s very conscious of her position as a role model and mentor to other girls, and will offer advice on everything from self-defense to fashion at the drop of a hat.

Erica takes her crime fighting seriously, but she does have a wry sense of humor that sometimes slips out during a fight.

Action Girl lives in an unnamed coastal town… probably on the West Coast, judging by the beaches and hot weather. So slip her into Titans West… she’d be at least as useful as Flamebird, and run rings around Golden Eagle ! 😉 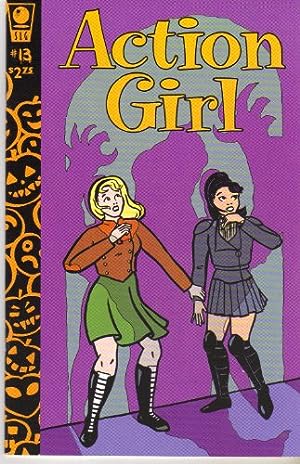