This is an older, gisted profile and will be replaced by more modern entries when feasible.

Adam Warlock’s is a genetically engineered being. His physiology and metabolism absorb and harness ambient cosmic energy. This provides him with superhuman durability, stamina, and strength. Warlock can also harness his cosmic power to fly up to several times the speed of light.

The cosmic energy he metabolizes can also be focused into blasts of concussive force.

In times of need Warlock can also spin a cocoon around his body to heal his injuries, leaving him in a dormant state. Warlock wears the Soul Gem on his brow. The gem allows him to:

After his rebirth, he was more “in tune” with the cosmos, and his place in the universe, enabling him to use his powers to their ultimate potential.

More dangerous however was that he was now possessed of a canniness and persuasiveness of such a level as to be able to draw the attention and respect of the various Cosmic Entities of the Universe. His ability to convince others of his point of view and methods are without equal.

Adam Warlock was “born” in the “Beehive”, Lock 41 on Shard Island. He was an experiment by four scientists, known as the Enclave, to create a “man of the future”. This subject would then serve their efforts in conquering the world.

Their creation, which they simply called “Him,” emerged into the world as a fully grown artificial man. He was gifted with cosmic powers far beyond their expectations.

Sensing his creators’ evil natures, and possessed only of “infant-like reasoning,” he used his cosmic powers to destroy their laboratory. He then left Earth and spends years “wandering the space ways.”

Eventually, his travels brought him to the High Evolutionary’s world, known as “Counter-Earth,”. Counter-Earth had become imperiled by the villainous Man-Beast. Lacking direction in his life, and yearning for a meaning in his existence, “Him” volunteered to protect Counter-Earth.

The High Evolutionary christened him “Adam Warlock”. He also gave him the mysterious Soul Gem as a “baptismal” gift. Warlock confronted the Man-Beast and his army. He bested the villain by using the Soul Gem to revert the Man-Beast back to his animal origins.

With his mission complete, Adam Warlock returned to the stars. He went to work for the forces of good throughout the universe. 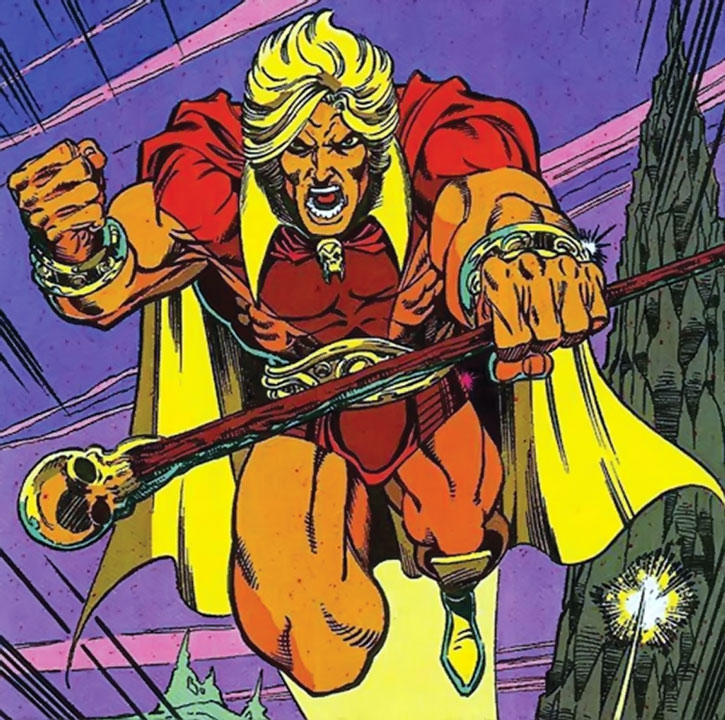 Soon after leaving Counter-Earth, Warlock became embroiled in a struggle against the Universal Church of Truth. Eventually Adam learned the Church’s founder, the Magus, was an evil version of himself from the future.

Due to the intervention of Thanos, Warlock was able to alter his “destiny” and eradicated the Magus from ever existing.

Thanos, however, had only assisted Warlock to stop the Magus from opposing his own schemes. Thanos was attempting to win the love of Death (the personification of death itself), and planned to destroy all life in the universe.

With the help of Earth’s Mighty Avengers and the Thing, Warlock managed the defeat Thanos. However, it also killed him. Warlock’s soul was absorbed by the Soul Gem.

Years later, Thanos returned to threaten the universe by assembling the Infinity Gauntlet. It granted him mastery of time, space, reality, power, the mind and the soul. In order to stop Thanos, Warlock and his allies, Gamora and Pip returned in new bodies.

Warlock along with an assemblage of most of Earth’s heroes (as well as Earth’s Cosmic Community), triumphed over Thanos once more. He claimed the Infinity Gauntlet for himself.

The great powers of the universe “convinced” him to give up his mantle of supremacy soon after. Warlock entrusted the gems of the Infinity Gauntlet to 5 guardians, Gamora, Pip, Moondragon, Drax the Destroyer, and Thanos. He kept the Soul Gem for himself. Together, they formed the team of the Infinity Watch.

Before his resurrection Warlock was a brooding, almost tragic figure. In his morose quest to find a purpose to his existence, he found some solace in becoming a force for good. He was possessed of almost imperceptible dry, dark humor, that at times emerged in his interactions with his friend Pip.

After his resurrection, he managed to divest himself of all good and evil, leaving only responsibility. This left Adam cool and collected, almost beyond words.

While once compelling, he now possessed a force of personality that could not be denied.

“I pity you Autolycus ! For you serve a *false* god who exploits you and *laughs* at your loyalty !”

“Prepare thyself for battle most fierce and awesome.”

Warlock’s origin would be tied into the “Secret Society of Super-Villains,” when Darkseid and Captain Comet were both in the book.

The Enclave would’ve been Lowlie scientists trying to rebel against Darkseid. Comet (who was named Adam Blake, and was also a “man of the future”) would’ve touched down on Apokolips, been captured, and cloned, the clone being Him (Adam Warlock). 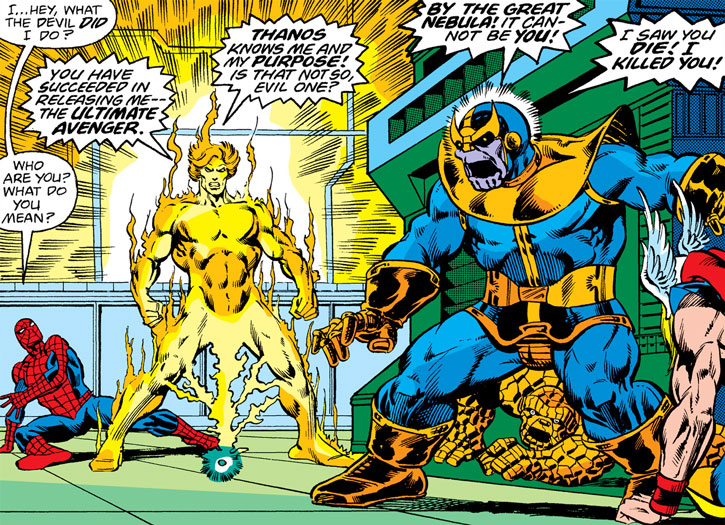 In his quest for a purpose in his existence and the meaning of life, Adam found during his years of space wandering many rumors of “The Source” of all life and all knowledge. In his pursuit of this he became entangled in and opposed the schemes of Darkseid, who sought the Anti-Life equation.

Eventually Warlock managed to penetrate the “Barrier” at some point and disappeared for many years, only to return once again when Darkseid managed to get close to finding the Anti-Life equation again.

He returned a creature devoid of good and evil, similar to Metron another seeker of knowledge, who similarly had the same experience with the “Barrier”. Also like Metron, Warlock was known possessed of an uncanny intellect.

Adam Warlock has the following Advantage :
Outside the loop of destiny (20 pts)
By Sébastien Andrivet.
The Character is not bound by Destiny. They can reverse the fate of the cosmos by his actions during crisis that would overshadow anybody else. Any crisis of cosmic proportions (Infinity crossovers, Crisis on Infinity Earth, Infinite Crisis, Thanos’ plan to kill half the universe, etc.) automatically counts as two Subplots for the character.

The Character *will* be involved in events foreshadowing any such cosmic crisis, giving him insight into what will happen. On top of this short adventure, the Character gains the benefits of completing a Subplot as he begins focusing his energies on the impending cosmic saga (i.e., he gets HPs).

Likewise, the Character *will* be involved in the thick of things when the cosmic conflict hits the universe. Being involved likewise counts as a Subplot for that Character, who will get the related HPs for completing the Subplot at the most dramatically appropriate moment (GM’s call).

This advantage works exactly like ordinary Connections and essentially makes the character himself into a so-called Cosmic Being. It is very common that a character with this Advantage possesses incredibly high mystical stats.

Cosmic beings are beings of incredible, celestial power or beings that personify various aspects of the Universe, such as life, death, time etc. The members of Marvel’s Cosmic Beings Community can be summarized as follows:

Higher-level Cosmic Beings (these have a High-level connection themselves):
Mistress Death (Embodiment of death)
Eternity (Embodiment of all there is)
Infinity (Sister of Eternity)
Galactus (The Devourer of Worlds)
Kronos (Titan God of Time)
Watcher (Watcher dedicated to studying our space sector)
Lord Chaos and Master Order (Galactic Balance)
Living Tribunal (Cosmic Judge of all realities)
Stranger (Mysterious stranger)
Mistress Love and Sire Hate (Embodiments of Love and Hate)
Celestials (Ancient god-like race)
Middle-level Cosmic Beings (these have a Low-level connection themselves):
Adam Warlock (current wearer of the Infinity Gems)
Eon (ancient entity)
Mephisto (The Devil)
Silver Surfer (former herald of Galactus)
Thanos (Demi-God of Death)
Elders of the Universe (lone survivors of the Universe’s first races)
Certain Entities used for invocations
Lower-level Cosmic Beings (these have no level of connection themselves, but will be contacts):
Various Pantheon Leaders (incl. Odin, Zeus, Manitou, Svarog, Tezcatlipoca, Itzamna, Osiris and Nuada)
Most Sorcerer Supremes (such as Dr. Strange)
Most Entities used for invocations
Some Cosmic defenders (such as Mar-Vell of the Kree (currently deceased),
Quasar (Wendell Vaughn) and Gladiator of the Shi’ar)
Lesser heralds of Galactus (such as Nova II, Firelord and Terrax)

By Peter S Piispanen and Jackson. 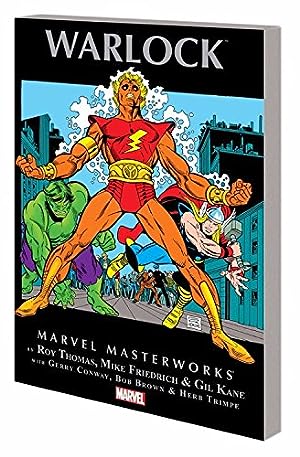 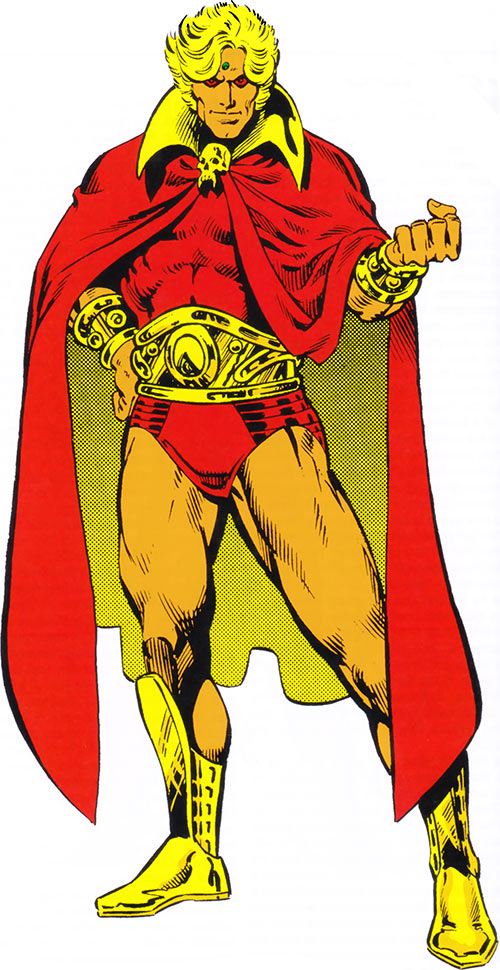 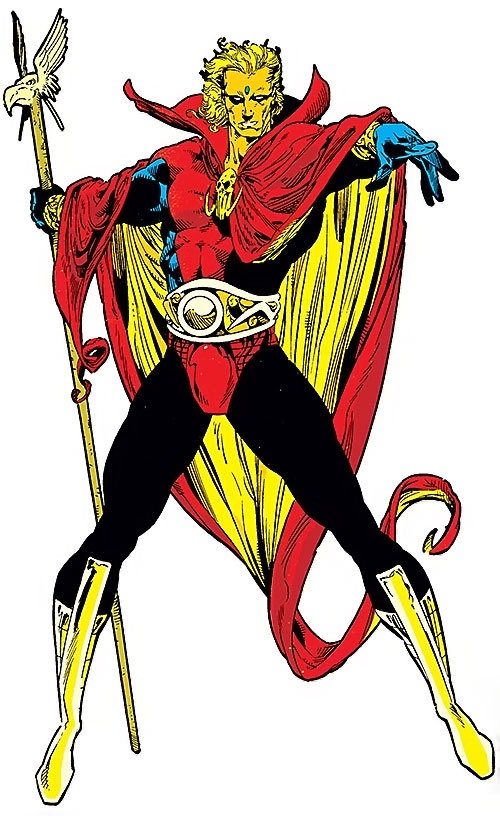 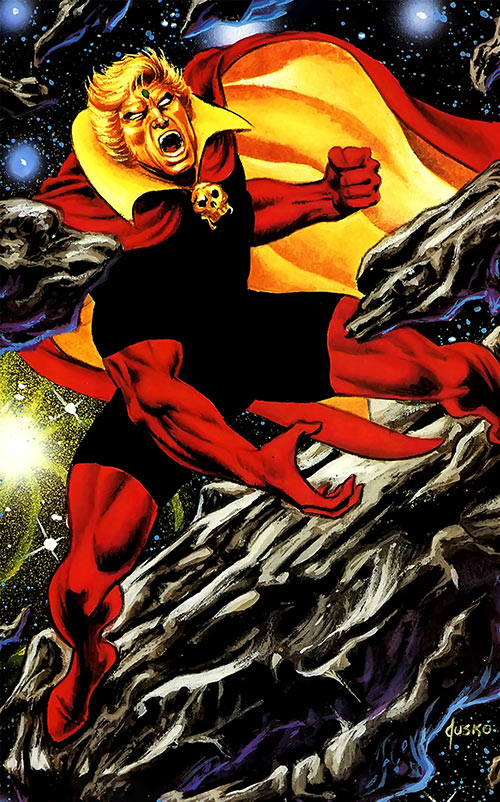 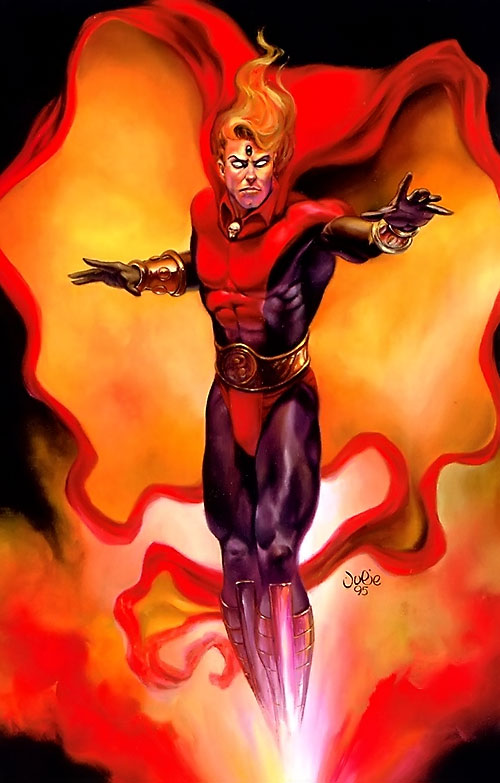 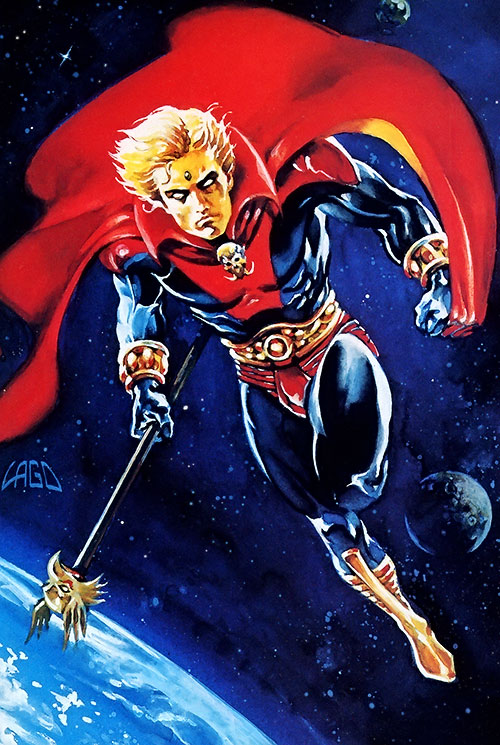 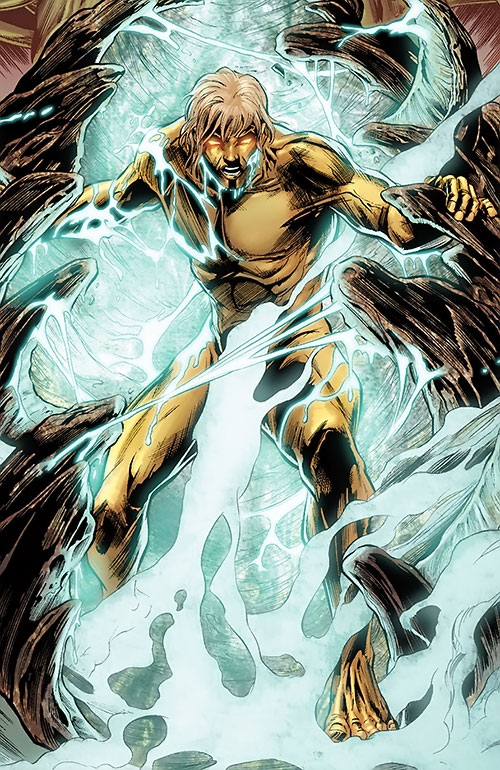 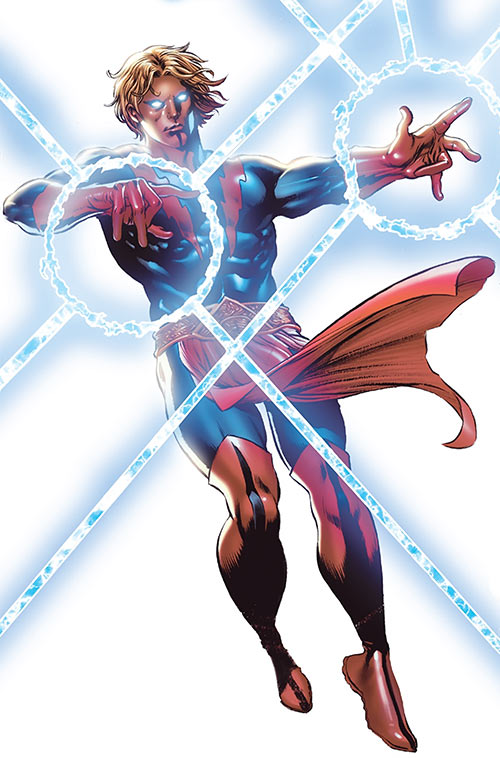