Adèle Blanc-Sec first saw publication in the mid-1970s, with the most recent material being from 2009.

The whole series is written and drawn by Jacques Tardi. It’s a notable work.

As often when I write about Francophone comics, we gonna go through some cultural context.

Spirit of the work

Much of Tardi’s work takes place between the 1890s and 1918. The First World War is a major recurring motif.

Beyond a fascination for the aesthetics of the tail end of the Long Nineteenth Century  , these stories are loaded with references and influences. The main ones are :

The narration in the first three GNs even relishes in using clichés and conventions from poorly-structured XIXth century serials. A later American equivalent would be pulp novels.

Tardi even relies on Chandler’s famous aphorism: “When in doubt [about where your story should go next], have a man come through the door with a gun in his hand”. 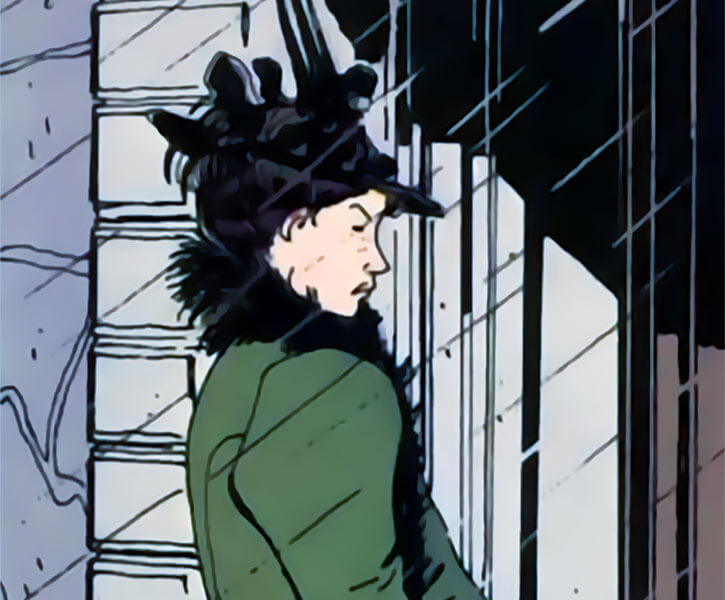 Therefore, the work uses many elements that are familiar to geeky genre storytelling. But it should *not* be seen as one. It’s more of a 1970s auteur creation.

It’s more a mixture of graphical art and semi-improv storytelling than an intellectual property, or a commercial narrative.

This profile focuses on the first four GNs.

These are often considered to be a separate era for the character. Later on, the story further distances itself from having a by-the-book narrative. Such as a clearly identified main character.

However, I am drawing from the later GNs for general info. Frex, her Background block is current as of Le labyrinthe infernal (GN #9).

(Incidentally, “Blanc-Sec” is a type of wine. A white with low sugar content, such as chablis or sancerre. Most characters in the GNs have similar unusual, exaggerated last names. “Blanc-Sec” also conveys that our heroine’s personality is far from sweet.)

For decades, there was only a small-scale English version by NBM Publishing  (who also translated Druillet, Pratt, etc.). Plus, IIRC, a publication in Dark Horse’s Cheval Noir magazine.

But during the 2010s, Fantagraphics  released their own. Which is now presumably easier to find than NBM’s.

This profile has S P O I L E R S. Though I’m focusing on the events as seen by Adèle, which are often not the bulk of the story.

Since I’ve explained a lot of the references, context, etc. this profile is presented in two parts. The second half is there. 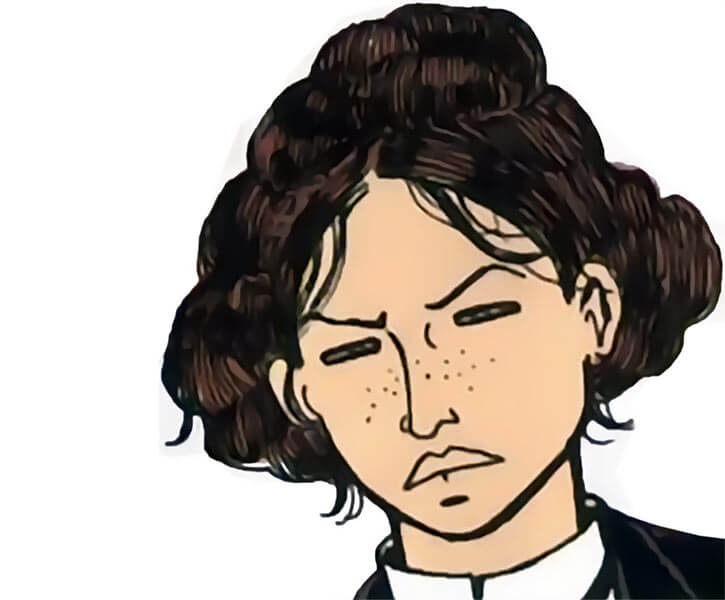 Adèle is a successful serials writer, and a minor Parisian celebrity. But her prose is pretty… purple. Since in the Tardiverse only mediocre art sells.

She has a strong, assertive personality. She’s also smart, and a good liar.

She’s oddly adept at procuring and using disguises. As is traditional in serials, which is where it became a corny storytelling element.

Ms. Blanc-Sec has an unclear amount of underworld experience. She knows :

Adèle Blanc-Sec excels at taking decisive action without worrying about the consequences.

She also excels, for most of the story, at somehow dodging said consequences of said decisions. Mostly through luck, chutzpah  and not giving a damn.

Her luck further manifests when dodging assassination attempts. If one is trying to kill Adèle Blanc-Sec, it is nearly guaranteed that most things will go wrong.

I could go with 1911-ish pop music. But that’s pretty awful.

If you absolutely insist, a big success of the time is also used as a motif about colonialism and misogyny in another Jacques Tardi story. I wouldn’t recommend it.

So let’s be less direct and go with Parabellum’s version of Cayenne.

This is also a contemporary song, having been written by Aristide Bruant  . It’s about street crime and punishment in early 1900s Paris. I also used it in another profile.

Parabellum did it in their own way – old-school French anarcho-punk-rock. Think of a guitars-heavy mix between The Clash and Bad Religion, but… burlier.

Arsène Blanc-Sec was born in Southwestern Brittany  , circa 1887. Her authoritarian, unloving mother wanted a boy. Out of spite, she gave her firstborn daughter a virile name.

The girl was an excellent student. She considered becoming a schoolmarm – an ambitious goal for one so poor. But her mother killed her dreams, sending her to Paris to become a menial.

(Breton emigration to Paris — from an impoverished rural area to the City of Lights — was a distinctive sociological phenomenon back then. It has many complexities involving several shades of racism, culture wars around Catholicism, classism, the suppression of Breton culture, specific forms of rural/urban divide, etc.).

Blanc-Sec’s mother died shortly after, in June of 1902. Her husband died in an accident one year later.

Though Arsène didn’t know it, she had a kid sister – Mireille, born in 1898. Mireille was adopted by the nearby Pain-Sec family when she was orphaned.

Meanwhile, Blanc-Sec lucked out. The house where she worked as a maid was that of Sarah Bernhardt. The great actress took a liking to her, and let her borrow her books.

(Sarah Bernhardt  (1844ish-1923) was a huge star. She arguably was the first global superstar, though of course her public was a theatre-going, French-speaking cultural elite. The scandalous Ms. Bernhardt routinely ignored social conventions. Her letting a Breton maid educate herself is thus credible.) 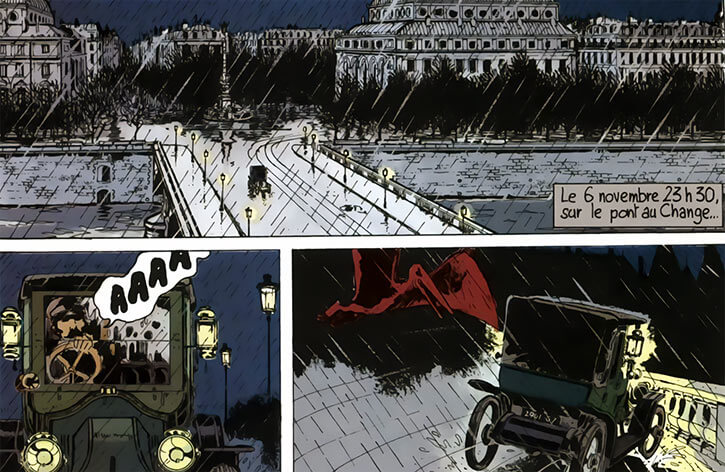 Ms. Blanc-Sec became Ms. Bernhardt’s confidante. In part because she read a lot of theatre and had committed her employer’s parts to memory.

She also was close to one of Bernhardt’s friends, an aged militant anarchist who had been a friend of Louise Michel.

(Louise Michel  (1830-1905) was a key figure in the history of anarchism and feminism. Frex, she seems to have been the first to use a black flag as a symbol of anarchy. The Adèle Blanc-Sec series and character evokes this tradition of anarchism, and Blanc-Sec’s wish to become a schoolteacher parallels Michel’s early career.)

Bernhardt let Blanc-Sec work on her education instead of doing chores, and hired another maid. She also suggested that Arsène change her first name, which had been a constant source of humiliation for her.

(Much of Adèle’s childhood and youth, explained above, is only ever mentioned in the back of L’Étrangleur #2. Which is where the ninth GN was published as a three-parter.) 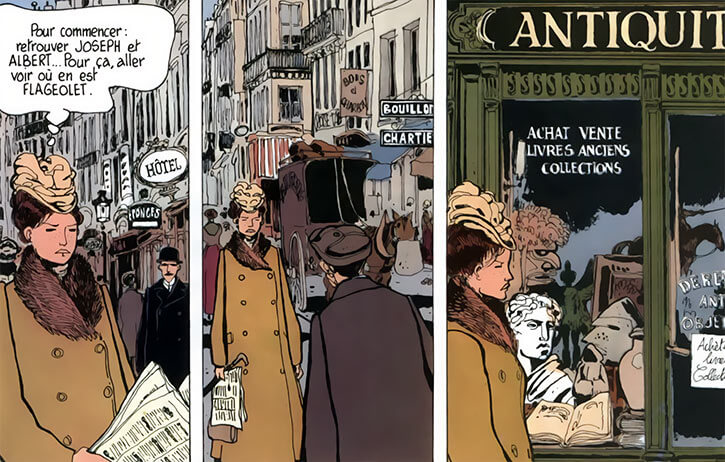 Whether Ms. Blanc-Sec became a schoolteacher is unconfirmed. But by 1910 at the latest, she had become a successful writer of serials.

Though her publisher Bonnot was a lunatic and a crook, Adèle Blanc-Sec became affluent. For instance her apartment had a hot water bathtub.

She also had room for souvenirs. Perhaps the oddest one was an Egyptian mummy found by a distant uncle.

(“Bonnot”, probably not coincidentally, is also a famous anarchist and bank robber of those times.)

Many of Adèle’s serials were in what we’d now call the “true crime” genre.

As research, she developed underworld ties. Her only mentioned relationship was thus with Lucien Ripol, a young bank robber.

However, Ripol was arrested for the murder of Mignonneau, a banker. Though he had stolen from Mignonneau, Ripol wasn’t the murderer. This relative innocent was condemned to the guillotine, and Blanc-Sec decided to save him.

She dealt with an inventor, Professor Rabatjoie, who had designed a bird-like light flying vehicle. Adèle’s secret plan was to use it to swoop in during the execution and rescue Lucien. But the inventor grew suspicious.

(Mad scientists are a constant motif in Tardi’s 1910s stories – though a few are benign. Weird science, paranormal happenings and impossible engineering are normal features of this world. But these are in the vein of period stories, not modern steampunk. If only because Tardi considerably precedes steampunk.)

By this time (November of 1911), a pterodactyl had been preying on Parisians. This was part of a strange experiment by psychic scientist Dr. Boutardieu. The murders took place when he was too tired to maintain mental control over the living fossil.

(The pterodactyl is one of the period art references in Adèle Blanc-Sec. It’s based on a distinctive work by printmaker Max Klinger  . This piece, The Abduction, is now at the MOMA  ).

Adèle didn’t care about the pterodactyl in the least. But it inspired Prof. Rabatjoie to style his contraption after the beast, which was a perfect cover.

To force him to finish the machine, Adèle kidnapped his daughter Edith. She also hired two criminals, Albert and Joseph, as muscle.

Blanc-Sec’s plan to snatch Ripol from the guillotine did work. She therefore released Edith Rabatjoie.

However, Lucien was killed by Albert as he was taking Adèle to the loot from the Mignonneau heist. Albert was in turn shot by Joseph, who despised him and coveted the Mignonneau booty.

In the end, Adèle was left without Lucien, and Joseph fled with the loot.

Continued in our next thrilling episode !

The remainder of the article is in part #2, available in all Parisian newsstands next week ! Blood ! Suspense ! Passion ! Strangeness !