This is zee second half of the article, coming after after zee first half.

Ms. Blanc-Sec allied with Mr. Flageolet, a private detective. Her goal was to locate Albert and/or Joseph and have her revenge.

Flageolet had been hired to find a statue – one of the stolen Mignonneau items. But Adèle came to realise that he wasn’t competent.

Nevertheless, the investigation led to the discovery of a Parisian cult worshipping (their version of) Pazuzu.

Albert was a senior cult member. All along, he had actually been working to procure a Pazuzu statue that was part of the Mignonneau loot.

Albert nearly killed Adèle with a Molotov cocktail. Nevertheless, disguised as a homeless man, she found the cult’s hideout.

She also discovered that the cult was killing witnesses — and had murdered Joseph — using a “sacred” injectable plague.

Blanc-Sec was, of course, captured to become a human sacrifice. But the incompetent police inspector Caponi stumbled upon this ceremony, which was taking place on the Eiffel Tower.

It was thus exposed that another senior cult member was famous actress Clara Bernhardt. And the leaders were high-ranking police and politicians.

Caponi was thus busted back to Sergeant. The Police Chief/cult leader was credited for Caponi’s arrests, and promoted. However, both Bernhardt and Blanc-Sec escaped from the police.

(Since we later learn that Blanc-Sec was a friend of Sarah, we can imagine that Clara was a fictional, third Bernhardt sister. And an actress like the other two. The story actually makes more sense if Clara and Adèle knew each other, and had some serious beef going back years.) 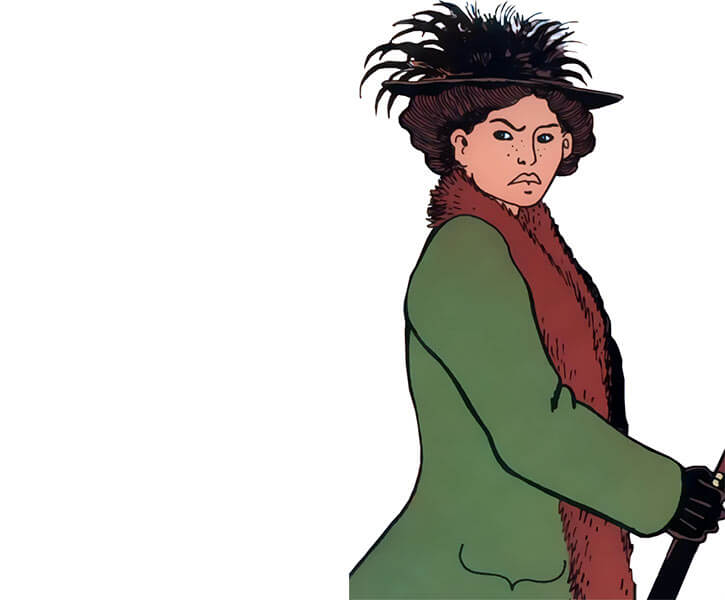 A traveller from an antique land

Adèle hid until early 1912 – from the police, and from whatever remained of the cult. Furthermore, she had been exposed as the party behind Lucien Ripol’s escape.

But she stumbled upon the mad scientists who had been behind the pterodactyl. They invited her to their newest experiment, which — among other things — involved returning a frozen giant pithecanthropus to life.

Adèle then narrowly survived a series of assassination attempts and kidnappings by :

But even brainwashed, the pithecanthrope was too much of a gentleman to hurt Adèle.

Espérandieu killed the proto-human, using a sort of steampunk, crab-like mini-tank. But he was himself killed in the fray.

Blanc-Sec then managed to run for it. The police thus only ended up arresting random bystanders. 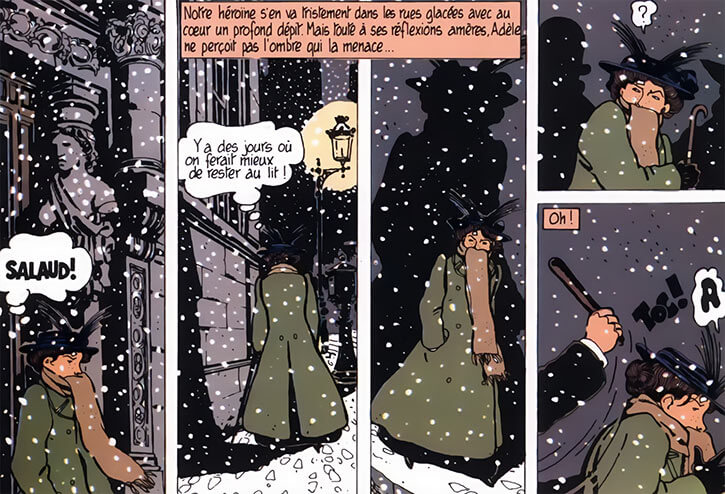 On the other hand, the police pressure eased on Blanc-Sec. She ended up publishing a series of novels fictionalising her adventures. Predictably, this version of herself was a glorious and undefeatable heroine.

They told him that Blanc-Sec had a rare mummy, which was useful for his research. And they paid him to leave a Satanic statuette in her apartment after visiting to see the mummy.

Meanwhile, Dieuleveult sent professional killer Thomas Rove after Adèle. But as he sneaked into the apartment, the mummy came to life, chased Rove off, and left.

Soon afterwards, all the mummies at the Louvre museum  vanished.

The Satanic (and apparently radioactive) statuette ploy worked. Adèle dodged several assassination attempts, but the statuette mesmerised her in her sleep. She sleepwalked out of her apartment to offer herself as a sacrifice to the merged cult.

(One of the over-the-top assassination attempts against Adèle is similar to a terrible accident that actually occurred at the Gare Montparnasse rail station. But in the real world it happened in 1895  .)

(Adèle also reaches the conclusion that the Titanic was sunk just to kill her. But that’s… a leap).

*Everything* went wrong during the sacrifice ceremony, and its fallout.

A trio of mad scientists were attending the ritual. These three men had been, years before, behind a plot to destroy civilisation.

(These guys appeared in a previous Jacques Tardi GN, The Ice Demon. This story is patterned after Jules Verne’s anti-heroes, such as Robur the Conqueror or Captain Nemo. The art is remarkable, being patterned after the woodprints that came with the vintage editions of Verne novels.) 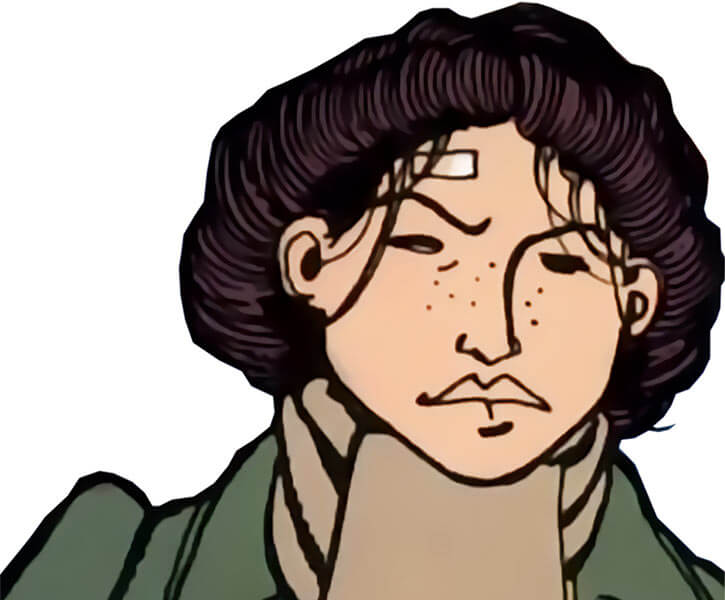 However, the trio had been hounded for years by one Simone Pouffiot. Once a scientific menace herself, the aged and wheelchair-bound Pouffiot had become a cunning, relentless huntress of mad scientists.

She had foiled the trio before, with the backing of the French Navy. And she had infiltrated the ceremony to kill them.

Madame Pouffiot was successful. However, she was shot dead as she killed her quarries. This triggered a confused, bloody battle.

In the fray, the horribly burned Clara Bernhardt made sure to knife the dazed Adèle Blanc-Sec, killing her.

(At this point, Jacques Tardi was considering ending the series. He apparently felt that it sold too well, and thus was putting him on creative rails.)

(There was also an obvious motif in killing off his sort-of-heroine as the stories reached 1914, with the Great European Suicide about to begin).

(However, the last few pages of the fourth and possibly-for-a-time-final GN had additional twists.)

Mouginot was one of the few survivors of the carnage at the cult. He stole Adèle’s corpse, wanting to use his mad science to revive her. However, Clara Bernhardt learned of this, and came to kill him.

She was slain in the nick of time by Patmosis, the mummy who had been in Adèle’s apartment for years. 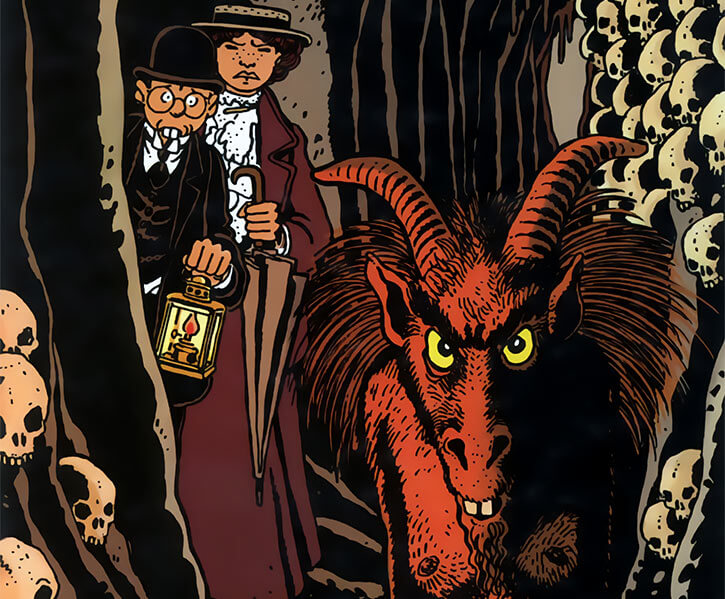 Patmosis and his mummy buddies came from a highly advanced Ancient Egyptian culture. They had been in voluntary suspended animation for 3,000 years, in order to visit the future as tourists.

As he had gradually awoken in Adèle’s apartment, Patmosis had grown fond of her. A loner, Ms. Blanc-Sec had gotten in the habit of talking to the seemingly inert mummy as if it were her best buddy, which Patmosis liked.

Though the Egyptians were about to return to their homeland, Patmosis thus showed Mouginot how to improve his mad science tech. Impressed, Mouginot modified the special regeneration equipment he had built for Adèle’s corpse.

(Tardi specifically references Some Words With A Mummy. This is a 1845 short story by Edgar Allan Poe, featuring the same mummies. Poe’s story *might* also have been the inspiration for a Fantomah enemy, Arco.)

However, Thomas Rove — the hitman sent by Dieuleveult — soon murdered Mouginot. His lab, including Blanc-Sec, was left behind and forgotten.

Adèle dresses as a middle-class Parisienne of the 1910s, as might be expected.

She normally wears a hat, of course. But hers tend to be ten years out of fashion. She liked the early 1900s hats, and stubbornly keeps wearing them despite the remarks from the fashion police.

Ms. Blanc-Sec’s beauty is commented upon with some regularity, to her exasperation.

She smokes a fair bit, like most everybody before the 2000s. She also regularly drinks liquor.

Adèle Blanc-Sec lives by her own rules. She cares little about society and conventional morals. She despises the authorities.

She does whatever she wants. With a good hint of arrogance and a strange form of confidence in her ability to make it in one piece.

Perhaps her more notable characteristic is that she’s an anachronism. She doesn’t follow any of the 1910s rules or conventions for a female literary character, and she’s resolutely single. She’s more of a 1970s liberated woman.

(Though of course there were precedents in period novels. Such as Madame Kesselbach in the 813 Arsène Lupin novel, or Michel Zévaco’s Annaïs de Lespars  (which reminds me of Masquerouge comics). And a few decades later we have non-conventional US comics heroines such as the Woman in Red, or Fantomah).

(There are also some contemporary women of similar independence, and it was the time of the suffragettes. But this doesn’t appear in the text. The only two parallels (Louise Michel and Sarah Bernhardt) solely appear in the L’Étrangleur #2 codicilAn addition that explains, modifies, or revokes a document (usually a will). Which was written by Dominique Grange – Tardi’s wife).

That known murderer of felines

Another readily notable trait is Adèle’s curiosity. If there’s something odd, she’s unable not to investigate.

A recurring gag in the series is Adèle coming to mysterious rendezvous that are *obviously* a thin cover for an assassination attempt. But she’s just too curious. And she’s aware that she has a good level of narrative immunity, anyway.

Blanc-Sec also displays but a flat affect. She took great risks to free Lucien Ripol, but even she couldn’t really tell whether she was in love with him.

She’s a loner. And she cares little for the survival of others, though she will probably oppose mass murder plots.

On the other hand, she does have an ego. Her opinion of her own writing is obviously overrated, and she’ll go to significant lengths to avenge betrayals.

During the course of the stories, her main emotional modes are curiosity, annoyance, impatience, sarcasm, and not wanting to deal with bores.

Blanc-Sec holds but contempt for the police and the authorities. She knows for a fact that they are corrupt, oppressive and generally incompetent.

This doesn’t seem to be any sort of structured political belief. She just doesn’t like the smothering bourgeois order, even though she herself lives in considerable comfort.

(This too corresponds to a number of turn-of-the-century political and literary themes. But they aren’t used in any depth in the stories, where the era is more like a meticulously recreated scenery.) 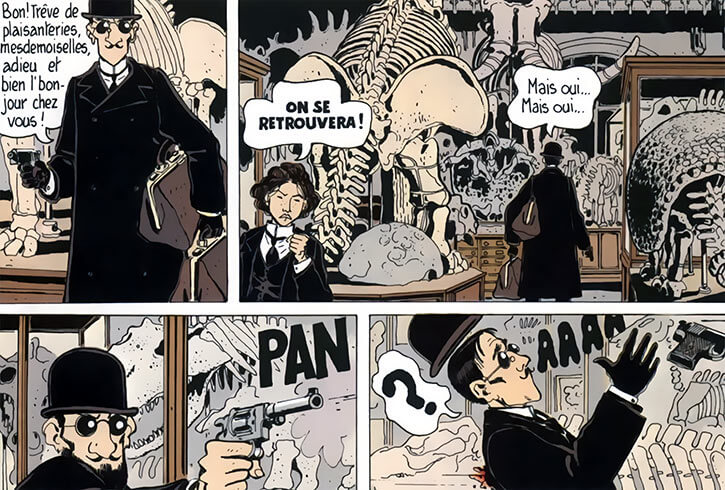 Adèle has a home defense weapon, probably a Baby Browning .25 ACP semi-auto pistol [BODY 02, Projectile weapons: 03, Ammo: 06, R#03]. On occasion she has carried it in her purse.

Ms. Blanc-Sec has occasionally hit people with her umbrella (or used it for visual cover) but that’s not game-stats-significant.

Her Hero Points are fairly high for the small-g genre. They help model her confidence and (relative) narrative immunity. Also keep in mind that :