No, that wasn’t a joke. And they weren’t even the same company as Hostess back then, which would be have been mitigating circumstances.

Galen-Kor is an experienced, hardened military officer from a thoroughly militarised warrior culture. And a fanatic.

Though he’s a martinet, Galen-Kor is a competent leader. And his plans were smart, well-managed, and inventive enough to compensate for poor resources. Had he been fighting for Earth rather than against it, we’d likely see him as a crafty badass and indomitable war hero.

Compared to a Human’s, a typical Kree’s body :

The Admiral also seems to rely on cybernetic implants to compensate for grave wounds, such as an apparently missing eye. The eye later gets replaced with an in-socket one (presumably a cloned replacement).

As an Admiral Kalen-Gor seems to have access to extensive secret data about Kree military history and weapons. This is implicit in his plans, but I’m chiefly basing this assessment on statements by Carol Danvers about how her own Kree officer persona/memories held such knowledge.

Beyond the safehouses they might establish planetside, Galen-Kor’s forces operate a Kree starship. It seems about cruiser-sized, and has teleportation projectors to project or evacuate away teams. They also deployed a number of Kree Sentries (giant humanoid robots) in different classes.

Galen-Kor will often be armed with a heavy plasma rifle.

If expecting major combat, he’ll instead wield a sort of sledgehammer. This is one of the Kree Universal Weapons. UWs are usually wielded by Accusers, who kinda are the Kree equivalent of Judge Dredd and his colleagues. Perhaps Kree Admirals are issued one as the highest judicial authority for their Fleet ?

Universal Weapons exist in a number of designs, of varying powers. Galen-Kor’s clearly isn’t as powerful as the one used by Ronan the Accuser, but it still has major oomph.

The 1992 Kree/Shi’ar war resulted in a galaxy-wide genocide. The explosion of the Nega-Bomb slew nearly 98% of the Kree population, which numbered in the trillions.

Worse, this carnage had been covertly engineered by the Kree ruler, the Supreme Intelligence. It was a demented attempt to get the Kree race out of its alleged evolutionary dead-end.

Shi’ar troops, under the command of Deathbird, took over the Kree Galaxy. But even after this massive trauma, the warlike Kree organised a number of rebel and terrorist factions.

One such cell was headed by Admiral Galen-Kor, who had apparently been badly burned by the Nega-Bomb. He had been commanding the flagship of his fleet when the Bomb hit, and reportedly saw the annihilation of Kree worlds in the blast.

Are we not Kree ?

Galen-Kor’s focus was on the role of Earthlings. Earth had been dragged into the conflict since it sat near a major stargate. The enormous resultant military traffic would have destroyed the Sun, but Quasar (Wendell Vaughn) and Binary (Carol Danvers) narrowly saved it. 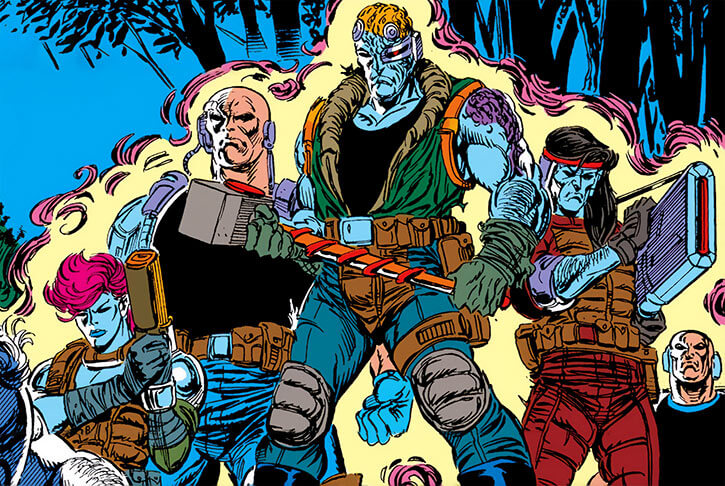 An Earth expeditionary force had also seemingly slain the Supreme Intelligence. Galen-Kor, a fierce nationalist, refused to accept Terran claims about the SI being behind the Nega-Bomb. Instead, he swore to kill the Avengers – and particularly the Black Knight (Dane Whitman), the SI’s apparent murderer.

While he was assembling a cell, Galen-Kor paid mercenaries (Raza Longknife and Hepzibah) to murder the Black Knight. To ensure Longknife’s compliance, Galen-Kor produced a medallion that apparently belonged to Raza’s long-lost son.

In an attempt to save the boy’s life, Raza did run the Black Knight through. However, Whitman survived.

But we only have 48 hours to destroy the Earth !

Admiral Galen-Kor and his operatives rebased on Earth’s moon. One specific sector, the Blue Area, had been a Kree outpost millennia before. Though it had been badly damaged, they set out to rebuild part of the facilities.

The same quarters had once sheltered Blue supremacists, opposing civil rights for Pink-skinned Krees. As a pun about the moon (“Luna” in Latin), these Blue Krees called themselves the Lunatic Legion. Galen-Kor’s organisation, admiring their efforts, would eventually reuse the name.

(I’m going to call them the “Lunatic Legion” from then on, even though the name is formally adopted later, for simplicity’s sake.)

A Kree probe then landed close to the new Lunatic Legion’s HQ. It held intelligence about the recent war. Being official Kree history, it was heavily biased. Since nothing bad could possibly be the fault of the Kree, it asserted that the Avengers (and the Skrulls, of course !) bore much of the responsibility for the genocide.

Being fervent nationalists, the Lunatic Legion eagerly ate this up.

Meanwhile, Galen-Kor secretly dealt with the Collector, an Elder of the Universe. The Collector was the one party who could both provide true Kree weapons of mass destruction, and didn’t ask for conventional payment. Instead, the Collector wanted the Avengers — alive — for his collection.

Say what you will about lunatism…

Using a cache of Kree Sentry robots, the Legion made another attempt against the Avengers. They struck just as the Terrans crawled out of the wreckage of Proctor’s base. However, the attack failed as a Shi’ar agent, Deathcry, warned and reinforced the Avengers just in time.

The Legion established safe houses on Earth. Then they launched small-scale raid against civilians. With their advanced weaponry, such raids killed thousands.

Then they leaked the location of one of their bases, and took down a party of Avengers in an ambush. However, the Admiral’s lieutenants were perplexed and frustrated as Galen-Kor forbade killing these Terrans.

A relief force of Avengers then came in. The Lunatic Legion was forced to abandon its prisoners. Furthermore, the Collector-provided Nega-Bomb they had set to destroy the Earth was disarmed with seconds to spare.

… at least it’s an ethos

In 1994, the Legion made another attempt against the Earth. They located and awakened a legendary Mephitisoid warrior who had been placed in suspended animation on Earth.

The deal was that the Mephitisoid would use his mind control abilities to turn Terran into a suicide army attacking the Shi’ar occupying the Kree Galaxy.

However, this op too was foiled by the Avengers – chiefly Deathcry and the Vision. Still, the Legion had learned some interesting secrets about Shi’ar and Mephitisoid military history.

Galen-Kor then led the Legion in a daring raid on Shi’ar-occupied Hala – the Kree capital world. They invaded a maximum security prison, and many of the prisoners agreed to join the Legion.

With this additional manpower, the Lunatic Legion rushed off to attack Earth and steal certain WMDs. However, the Shi’ar Imperial Guard (including Gladiator) was on their heels. Furthermore, Earth superheroes (including the likes of the Hulk (Bruce Banner) or Wolverine (James Howlett)) responded too quickly. The attacks failed.

Imperatrix Lilandra then enlisted the X-Men to take out Galen-Kor and his last few operatives, who were barricaded within a Hala palace. Galen-Kor might have been able to kill Cyclops, but Jubilee and Gambit derailed that. The entire Legion and their new allies was apparently captured.

(These promo stories didn’t make much sense. But as long as we stick to general descriptions, it works out okay. A caption in Iron Man Vol. 3 #7 implies that this stuff isn’t in continuity, but who knows.)

Formally taking the “Lunatic Legion” name, Galen-Kor and his operatives determined that the Kree Supreme Intelligence was still alive, and hidden on Earth. After locating the SI, they used Blue Area machinery to provide it with full life support. 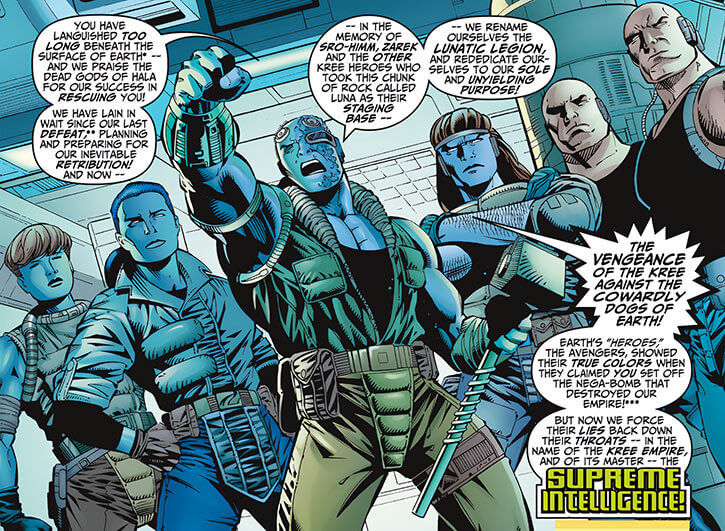 However, the SI had its own secret plan – which it didn’t share with the Legion.

The Legion also considerably improved its manpower, from a small squad to a full platoon.

Admiral Galen-Kor had come up with a new way to destroy Earth despite his limited resources. His cobbled-together weapon involved :

All of this could be used to mutate normal Humans into a new kind of Kree – and kill Human-based mutants and mutates .

However, this would interfere with the secret plans of the Supreme Intelligence. The SI thus covertly warned Quicksilver (Pietro Maximoff), the Scarlet Witch (Wanda Maximoff), Hawkeye (Clint Barton) and Lockjaw.

Along with Warbird, these heroes destroyed part of Galen-Kor’s resources – but not enough. The Admiral and his Legion could still switch to plan B. That involved sacrificing themselves to power the Omni-Wave Projector.

The Avengers responded in time. Stretching their powers to the limit, they prevented the Projector from being fired at Earth.

Three Lunatic Legion grunts had not been turned into energy to feed the Projector. A diplomatic solution was reached so they’d leave Earth. But this was derailed by Ronan the Accuser who enlisted the three survivors as deputies.

Conquest, he was out to make a conquest

However, Galen-Kor survived and returned to the Kree Empire. Perhaps interfering with the Omni-Wave Projector meant that the persons converted to energy returned to material form. And/or perhaps the Supreme Intelligence intervened rather than lose capable soldiers.

Whether Galen-Kor had already returned during the Annihilation is unrevealed.

But he was present during the Conquest, in 2007. This is when the Kree Empire abruptly fell to techno-organic  assimilation. He made it out alive, and rejoined Ronan’s resistance army as Head of Special Operations.

But many came, too much for Kree

Aided by the capable if sassy Captain Chan-Dar (who hated his guts), Galen-Kor put together a low-tech commando drafted from Kree prisons. Led by Starlord (Peter Quill), this odd unit was made up of Bug, Deathcry, Mantis (Ms. Brandt), Captain Universe (Gabriel Vargas), Rocket Raccoon and Groot.

As it turned out, this commando played a key role in the defeat of techno-organic entities the Phalanx. This victory likely saved the entire local galactic cluster.

Galen-Kor is a rigid, warlike fanatic with an uncompromising warrior ethos. He’s firmly steeped in the long, totalitarian Kree tradition that brought us such achievements as war, war and war.

Said warrior ethos also means that word is bond. Galen-Kor will never renege on a deal unless he has waterproof case that it is the most honourable option.

Galen-Kor and one of his lieutenants, the magenta-haired Kona-Lor, were lovers. Their relationship seemed… unsentimental at best, and never factored into their chain of command. As with Kree body density, how mainstream Kree cultures frames couples is unclear in the Marvel material.

“If the Supremor felt a need for such a world, who are we to judge ?”

“I am Admiral Galen-Kor of the last Kree Imperial Fleet, once the most feared armada through the known galaxies. That is no longer. My fleet is gone. My people dead. My empire lost. And you are to blame, Terrans. And thus, your world will pay for the crimes committed against my people.”

“Our people have ever been thus, and in these cruel days we must not forget our heritage !”

Advantages:
“Genius” (Kree technology), Language (Kree – but Galen-Kor doesn’t speak any Earth language), Rank (Early on equivalent of a Sergeant due to lack of manpower. By 1998 he had enough soldiers to require the Lieutenant Rank), Scholar (Kree military history, Kree military technology and protocols). 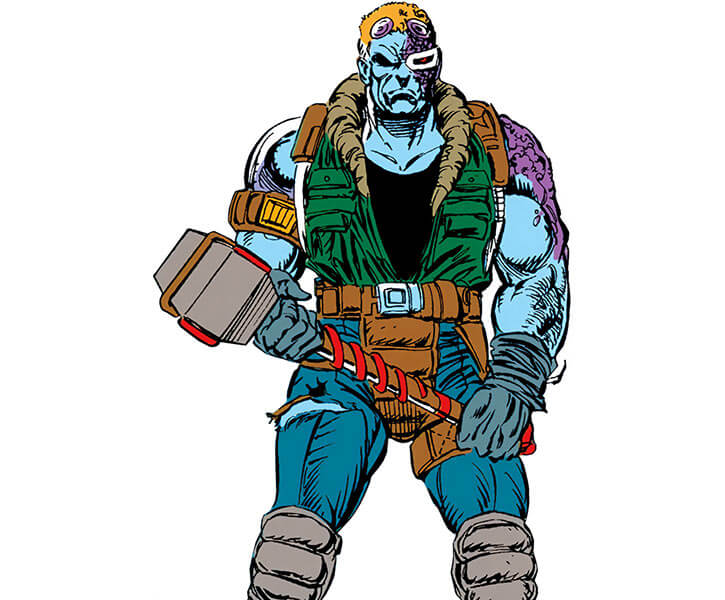 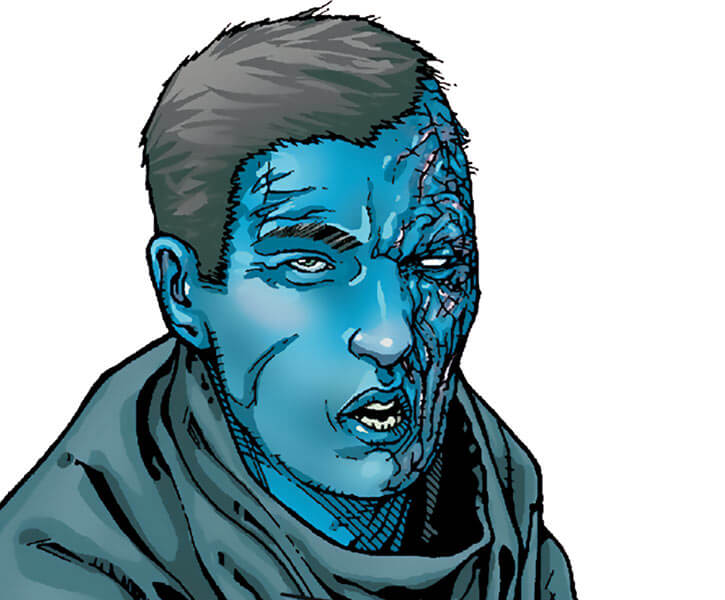