As Adonis, Cameron possesses a deformed and unusually strong LMD  body. He seems to essentially be a human brain in a cybernetic cradle controlling a robotic body disguised as an organic one.

Said body is superhumanly strong. He can crush stone statues, punch through some metals or easily flip over a large car. However, Captain America (Steve Rogers) can survive his punches and keep fighting.

Adonis could withstand blows from Cap’s shield without being damaged. He did not need to breath – he could remain for hours at the bottom of a river without ill effects. He was also bulletproof, at least as far as small arms are concerned, and allegedly immortal. Though he may just have meant that the body could be repaired like any machine.

Adonis is a ferocious, fast, dedicated fighter. He was fighting Captain America on what seemed to be an equal standing (!).

Cameron was a technologically-oriented genius specialising in cybernetics. However, he was too irrational during his appearances as Adonis to use these skills.

Eric Cameron was the owner and chief technology officer of Cameron Electronics, in the New York State. It may have been a notable company in the 1960s and 1970s. He also was a genius, particularly in the domain of cybernetic man/machine interfaces.

While his body and mind aged, the foul-tempered technologist stubbornly refused to die. Over time, he converted much of the main Cameron Electronics plant into an extended life support system. His inventions kept him alive, but they required enormous power and processing capabilities.

By 1980, the plant he had poured his life into during his youth was essentially his extended body. His biological body was riddled with tubing and implants.

Cameron resolved to procure a young, powerful, immortal body for himself. He schemed to steal the core piece of technology behind the Life Model Decoys (LMD) robots used by S.H.I.E.L.D., to create a custom LMD body for himself.

He designed a cybernetic cradle so his organic brain could be slotted into a LMB body. He also hired neurosurgeons and designed a surgical robot to make this transplant possible. Cameron referred to his future body as “Adonis”. It would be young, flawless and gorgeous.

Eric’s son Brady, who had always felt oppressed and held in contempt by his father, decided that he would sabotage the operation. Killing his father would allow him to take over Cameron Electronics to become his own man.

Cameron had mercenaries steal the coffin-like Master Matrix, the main device used to create LMD, while it was being presented as legal evidence. Captain America (Steve Rogers) was guarding it, but he chose to feign defeat for a short while so he could follow the thieves. 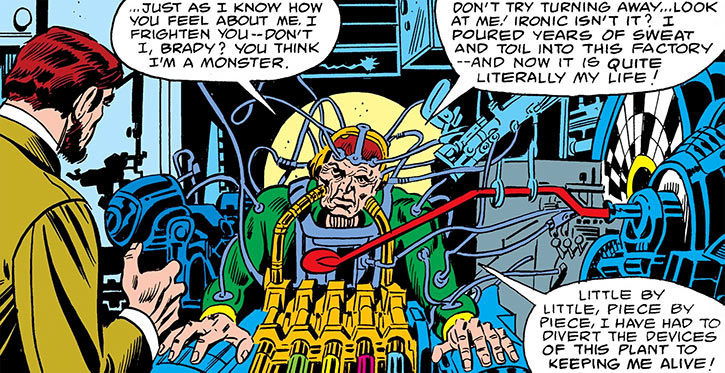 As soon as the mercs’ helicopter landed, the “Adonis” body started being built. Meanwhile, the early stages of the brain transplant operation took place. Since everyone was rushing, nobody noticed that the Matrix had been damaged by a stray shot.

Furthermore, Brady Cameron dismissed the staff ASAP, to sabotage the Master Matrix before Eric Cameron awoke. But between his lack of skill and the unnoticed damage, the Matrix burst in flames. Captain America rushed in to save Brady. But meanwhile, Eric emerged from the Master Matrix.

The LMD body was grotesquely damaged and warped. And Eric Cameron was irrational from having been locked into a coffin filled with fire and lightning. He tried to kill his son for tampering with the process. But Captain America stopped him, and the elder Cameron fled in confusion.

Upon seeing his reflection, Cameron went insane and attempted suicide by drowning. But his LMD body made that impossible. Aimless and violent, he drifted South, all the way to Central Park.

Seeing statues, the former Eric Cameron started destroying them as they symbolised beauty. The police attempted to stop him. This escalated into a battle during which Adonis decided that he should also kill beautiful women, because of course. However, Captain America came in.

The traumatised Adonis fled when he saw a lightning flash, but Cap gave chase. At a construction site at the 59th Street Lake, Cameron was accidentally caught in the gearshift of a bulldozer. He then seemed to perish through electrocution, and hasn’t been seen since.

Still, the odds that he died from the electrical shock (rather than pass out due to his traumatic fear of fire and electricity) seem low. If he ever came back, he could — between his fighting skill, strength, obsessions and genius — be a formidable presence.

As described by his son, Eric Cameron was an overbearing martinet and an authoritarian egotist. He raged against his impending death.

After the accident with the Matrix, he was irrational and psychotic. His new body horrified him, and he was reeling from the trauma suffered within the Master Matrix.

Adonis later came up with the notion that he was a sort of avatar of ugliness. As such, he would destroy beauty around him to teach everybody that beauty was fleeting and a lie. But one got the impression that he was becoming more rational as time passed – until a flash of lightning spooked him.

“Electricity ! Fire ! It burned me, and changed me and made me a monster !”

Skills:
Adonis did not seem to have access to his Skills due to his psychological state. But he had the equivalent of Martial Artist: 10 due to his insanity.

Advantages:
Adonis did not seem to have access to his Advantages due to his psychological state. But he had the equivalent of Lightning Reflexes due to his insanity.

Though Adonis was traumatised and irrational, Eric Cameron was previously a genius. If Adonis survived and regained his composure, it is likely that he could make use of his intelligence and technical skills.

From what was seen, Cameron’s technologically-oriented intellect seemed to be in the vicinity of Gadgetry: 08, Scientist (Drawing plans): 09, Genius, Expertise (Cybernetics), plus possibly others. He may have had Charisma (Intimidation): 04.

The Mental Attributes in the stats block reflect Adonis’s shellshocked state. Cameron’s scores were presumably something like INT 04 WIL 05 MIN 04. His Wealth was unclear (perhaps 08 APs ?) and he likely had Low Connections in the business world.

When he was on life support and tied to his electronics plant, Cameron essentially had Interface: 08 throughout the entire plant. He monitored everything going on within it through an extensive network of microphones and cameras.

He could activate the numerous security systems in a quasi-telekinetic manner. These included all the classics — metallic tentacles, flamethrowers, lasers, miniature rocket launchers, etc.

Martial Artist gets used since Adonis seemed easier to hit when going on the offensive. 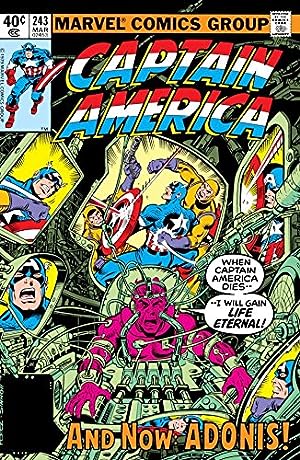