Adria is a competent mystic and a smart, assertive person.

She’s generally a resourceful and deceptive opponent, and managed to keep even Strange on the ropes during a game of cat and mouse – though of course Dr. Strange was very weakened at that point.

Much of Adria’s background is unrevealed. In her initial appearances she wasn’t even identified, though secondary sources referred to her as the Witch. She was one of Baron Mordo’s chief lieutenants , along with the likes of Sir Baskerville, the Demon (later known as Demonicus) and Kaecillius.

The Witch appeared to chiefly serve Mordo in order to amass greater mystical knowledge and power, and was always looking out for number one.

In 1966, just after Strange came back from his famous duel with Dormammu using Pincers of Power, the Witch, the Demon and Kaecillius attempted to fell Strange in the name of Mordo. The Witch placed a mundane bomb in the Sanctum Sanctorum. Her bet was that Strange, weakened by the fight, would not detect a non-mystical danger.

She was nearly right. Strange got rid of the bomb too late, and the detonation stunned him. As he was dazed and out of juice, the Disciples of Mordo struck, captured him and incapacitated him. 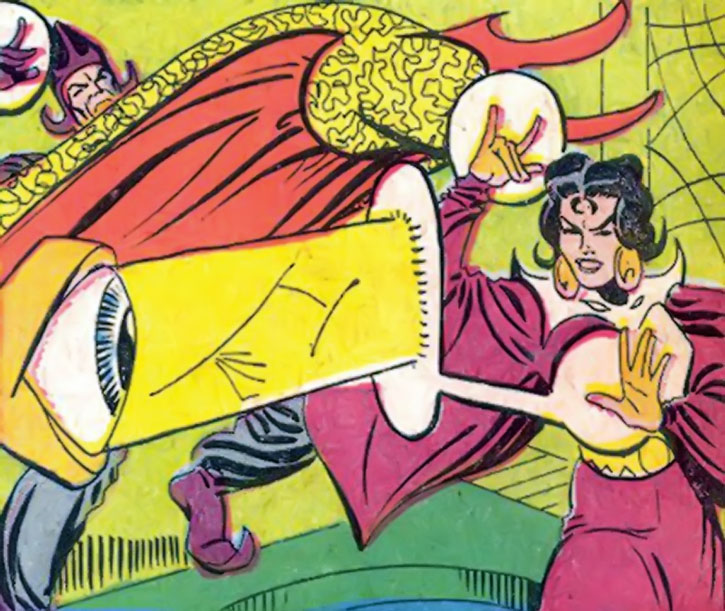 Using his astral form, Strange barely managed to escape. The Witch sensed something was amiss and called in security. Though it again was a close call, Dr. Strange eventually defeated his three opponents by astrally manipulating his amulet and his cloak.

His victory earned, Strange hypnotised the Demon, the Witch and Kaecillius into forgetting everything about black magic and living new lives to redeem their old.

The witch, the witch is back (part 1)

The spell apparently did not work – or perhaps the Disciples were irredeemable. They returned after some decades, and eventually decided to get their revenge on Strange and steal his stuff to increase their power.

When Strange’s friend Morgana Blessing asked to interview him, the former Disciples managed to disguise themselves as a small video outfit and be selected as the contractors filming the interview.

However, Dr. Strange was now at the height of his power. He immediately detected the ruse. Though the former Disciples thought they had outsmarted him, they were hopelessly outmatched and trapped in Strange’s Sanctum.

The witch, the witch is back (part 2)

Adria attempted to turn the tables on Strange by grabbing a powerful artefact. Seeing Strange gravely concerned over her handling the artefact, Adria assumed that it was because it was powerful enough to vanquish the Sorcerer Supreme.

She was wrong. Strange was concerned because the enchanted globe was likely to shunt the three Disciples into the Purple Mission, and had little to fear about his own safety.

Ignoring Dr. Strange’s warning, Adria cast a spell to activate the artefact. She and her two cohorts did end up in the Purple Dimension. Getting out of there being a major problem even for far more powerful sorcerers, the former Disciples have not been seen since.

Early on, Adria disguised herself with a suit and featureless black mask – it’s vaguely reminiscent of the original Question.

Perhaps the mask disguises her voice, and/or she has a husky voice, since the intent seemed to have been to disguise her gender.

Adria is super-ambitious, haughty, and craves power. The only thing that concerns her is her own puissance (and how to increase it) and being treated with fear and respect.

Being power-hungry, deceitful, self-centred and manipulative, she has difficulties imagining others might not be.

“Dr. Strange could never be fooled by a black magic trap — but a simple bomb, with no magical qualities, may completely escape his notice !”

“How truly pleased will Mordo be with the triumph of his loyal deputy ! But, if I can fathom the secret of Dr. Strange’s amulet, I shall not need Mordo’s good will ! My power would then be far greater than his !”

“Enough — begone, vain image ! Offend my sight no longer ! But be warned — find Dr. Strange at once, or suffer the consequences !”

“Satannish take the architect who designed this maze of halls !”

“These two bunglers are of no help ! But there is great power within these cabinets… I can feel it !”

Rituals:
The Disciples have a Ritual that allow them to remain in slight telepathic contact as long as they wish. Adria also has a Ritual allowing her to place a dweomer  on an object that allows her to always find that object (a Detect Ritual). A further Ritual allowed them to mystically don a full disguise (Chameleon Ritual). All those are likely around 6 APs. 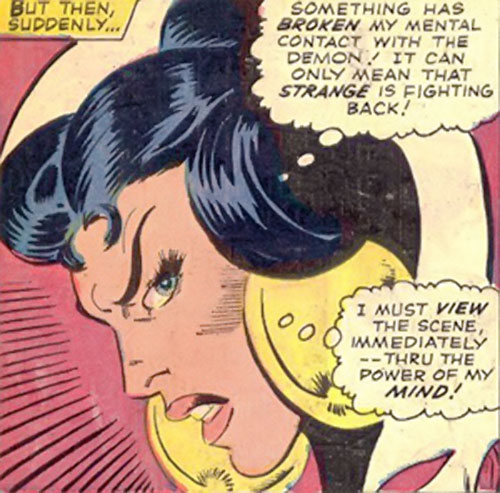 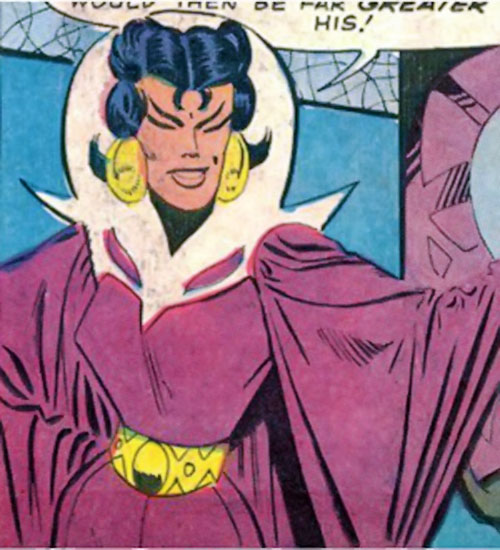 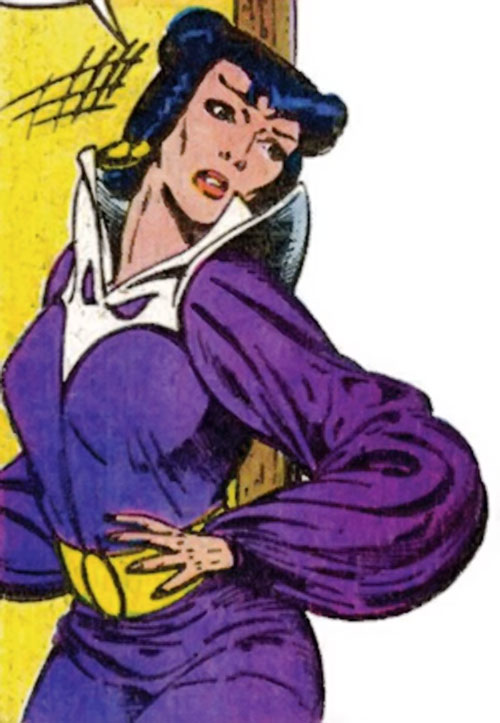 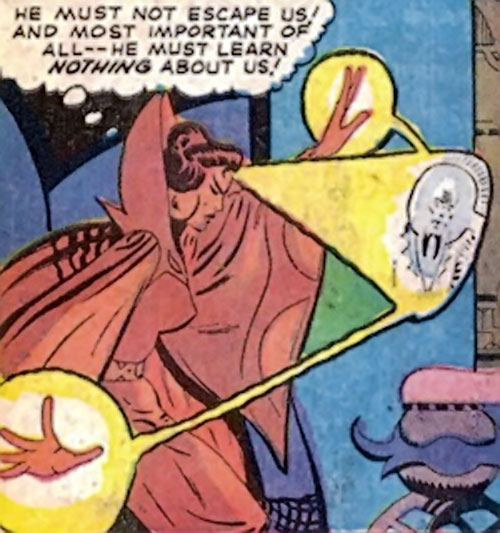 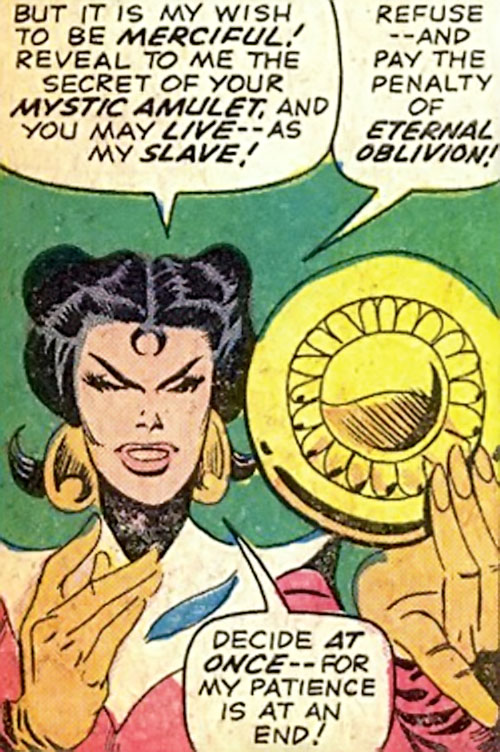 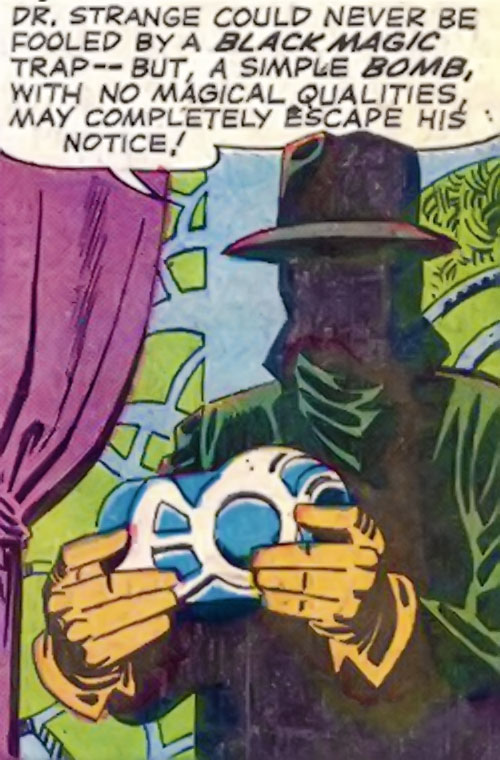