In addition to his extensive military training, Adrian Shephard is an avid naturalist and amateur biologist. He is in excellent shape and has a very sharp mind.

As part of his service in HECQB, he has received extensive inoculations against various toxins and diseases, rendering him unusually resistant to such measures.

During his captivity in Xen he has learned a great deal about the life forms of Xen, and is adept with Xen biotechnology.

He is still familiar with many high-level government security procedures and is thus still able to penetrate said security to some degree (hence the Low Security Clearance) ; as time passes these procedures will change and his Clearance will become completely useless.

Even before the Black Mesa Research Facility incident, Adrian Shephard’s history was somewhat distinguished. After graduating high school, Shephard entered college and began working toward a degree in biology, an interest stemming from his recreational activities as an avid outdoorsman.

During his sophomore year, Shephard enrolled in a ROTC class. It was just supposed to be an entertaining elective class, but he discovered that he had both a talent and a love for military operations.

He joined the U.S. Marine Corp that summer and worked his way into Force Recon. The brass noted his outstanding service there and his education in biology. As a result, Shephard was transferred to the newly established Special Operations Command (SOCOM) Hazardous Environment Close-Quarters Battle team (HECQB).

This was a unit trained to conduct tactical operations in urban environments with environmental dangers due to such incidents as industrial accidents and terrorist operations.

Merely days after HECQB declared operational the team was deployed with USMC Force Recon to Black Mesa in response to the dimensional incursion from Xen. The troops were not adequately informed as to the level of threat. As a result, many of the Osprey troop transports  were shot down on approach, including Shephard’s.

Shephard himself was rendered unconscious in the crash. His team, separated from the other elements of the responding force, linked up with Black Mesa security and holed up inside the facility.

When Shephard awoke, his fellow officers had been killed in combat. Furthermore, orders had come down to “neutralize” the civilians. He declined the orders, and suggested that the civilians remain hidden behind their barricades while he went topside and found out was going on.

Shephard battled his way to the top, only to be abandoned as his fellow troops pulled out. He and other marines that had been left behind battled the aliens of Xen and Race-X as well as black-ops troops trying to kill every remaining thing in Black Mesa. Shephard alone survived these battles and single-handedly stopped Geneworm (the leader of Race-X) from entering the Earth Dimension.

The Administrator told Shephard that he was ordered to dispose of the Corporal, but was sparing him out of respect for his resourcefulness. Shephard suspected that the Administrator was actually stowing him away as a wild card in case of an emergency, but did not voice that suspicion. Shephard was then dropped off in an isolated corner of Xen.

(What follows is a speculative history about Adrian Shephard’s actions after the events of Opposing Force. His actual status is currently unknown.)

Despite his stated respect, the Administrator apparently underestimated Shephard’s resourcefulness. Shephard’s knowledge of biology and his knack for handling animals came in handy in learning to use Xen biotechnology. He also had detailed notes from Black Mesa scientists which he had acquired during his travels through the facility and had secretly stowed in his combat armor.

He mastered the use of Xen biotechnology and made his way to the Fortress/Factory formerly ruled by Nihilanth and now occupied by U.S. forces.

Shephard infiltrated the Fortress. He used the facilities therein to return to Earth, arriving in Black Mesa. Shephard discovered that the bomb used on Black Mesa was a tactical nuke that had only demolished the upper levels. This allowed the lower levels to be used in secret by the human Xen occupation forces. Shephard secured a displacer gun and exited the facility.

Shephard is dedicated at the moment to uncovering the forces behind the human occupation of Xen. He feels that the occupation and enslavement of the natives of Xen by the U.S. Government is as loathsome as Nihilanth’s domination of those same natives was.

He has established safe houses in Xen and on Earth. Shephard is currently infiltrating various government facilities to learn more about the Xen Expeditionary Force. He is also seeking like-minded individuals to aid him in his war.

Adrian Sheppard was meant to return in the fourth episode of Half-Life 2, which was to be developed by Arkane Studio.

However, Valve killed the project early in development, for not particularly convincing reasons.

Usually Adrian Shephard’s appearance is completely obscured by his combat dress. It consists in urban camouflage fatigues with a black combat vest, boots, and gloves, topped with a Kevlar helmet and gas mask. The fatigues are designed to seal together and jack into the Powered Combat Vest, providing a degree of protection from adverse environmental conditions.

When deploying it is common for Shephard to have his field gear stowed in “the green wart”. This is a large backpack that sticks out in back instead of on top to decrease its profile (and causes no end of back aches for those wearing it). What little is seen of Shephard’s skin indicates that he is probably Caucasian, but for some reason I always visualize him as Wesley Snipes.

Adrian Shephard is often laconic, speaking only when necessary to the situation. His favorite activity is hiking alone in the woods. Despite his fondness for solitude, he is also quite at ease when dealing with people and actually demonstrated excellent leadership during his time with the military.

As with many Special Forces troops, he is more interested in accomplishing the mission as efficiently as possible than in playing it “by the book.” He also will not obey an order he feels is immoral.

The PCs may become in involved in the events at Black Mesa and meet Shephard during that conflict. Alternatively, Shephard may be encountered breaking into secure government facilities seeking information on the Xen Expeditionary Force. Or he might be seeking help in leading a revolution against said occupying forces.

Both circumstances may occur. The PCs could encounter Shephard during the Black Mesa incident, during which he apparently dies and Black Mesa itself is destroyed. Only to encounter him yet again during his jihad against the new enslavers of Xen.

Equipment:
Upon Deployment at Black Mesa, Shephard had:

Additional equipment:
Shephard acquired many other weapons during the battle at Black Mesa. After escaping his imprisonment in Xen (see History below), Shephard has access to every weapon on the Half-Life Weapons list and possibly other military equipment, since he knows how to steal anything to which he doesn’t have free access.

He will almost always have the displacer gun, allowing him to escape to Xen if the tactical situation becomes untenable.

Prior to the Black Mesa Research Facility Incident, Adrian did not have Confined Headquarters, Scholar (Xen Bio-Technology) or Mistrust and only had Resources: 003, but did have Security Clearance (High).

Shephard had Secret Identity both before and after Black Mesa. Before Black Mesa, Shephard’s military station was secret for security purposes. Now he is trying to keep the authorities from discovering that he is the infiltrator seeking information about Xen. His resources are now higher because he has significant secret avenues to obtain equipment (theft and black-marketeering, mostly). 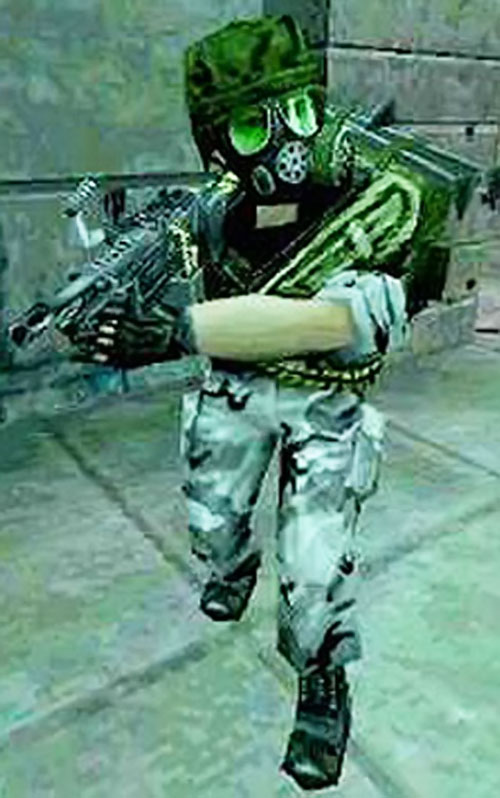