A highly talented wood carver, Geppetto has also had extensive training in magic over the years. He has had numerous enchantment placed on himself, making him virtually invulnerable to all forms of attack. He survived even a blow from the Vorpal Blade, and was surprised that the blade withstood the impact.

Like all Fables, Geppetto is extremely long-lived, and is difficult to kill, allegedly based on the popularity of their tales.

His main power, however, is in the vast empire at his command. He has infinite resources at his command, as well as armies of both soldiers and sorcerers.

His most loyal and trusted agents are his wooden soldiers, automatons created by him, and enchanted to be completely loyal to him. Their nature makes them tougher than normal humans, and virtually inexhaustible. They hold the most trusted positions within his armies.

Some have undergone transformations into human flesh, although they retain their loyalty enchantments, for various reasons, including being his spies in the Mundy world.

The largest of his creations is the Emperor, the figurehead of his Empire, whom he crafted to be suitably imposing.

(A fuller history of Fabletown can be found in the main article).

Once upon a time a lonely woodcarver carved a son to keep him company. This son, Pinocchio, had a wanderlust which kept him from staying with the old man. Even when he was turned into a human boy by the Blue Fairy, he still kept on going off on adventures.

So Geppetto created other children, older sons and daughters enchanted to be loyal and less likely to stray. Occasionally the Blue Fairy turned one of them human.

Geppetto’s renown at creating life saw him approached by local elders. The local Count had become increasingly erratic, posing a danger to the community. The elders petitioned Geppetto to create a double of the Count, who could replace him and provide stability in the region.

Despite misgivings at a plan that obviously required murder, Geppetto eventually agreed. 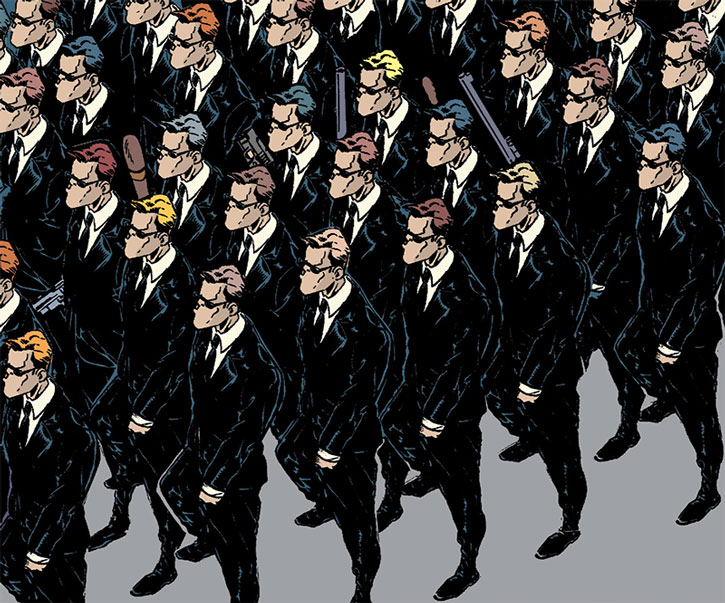 After waiting for the mercurial Blue Fairy to turn the double human, the Count was killed. His replacement ruled long and wisely, if favouring the elders in his decisions.

When the time came, the Count passed on. The elders feared his son would make an incompetent ruler, so he too was replaced. And then a neighbouring ruler seemed likely to cause a problem, so better to deal with him sooner than later.

And so on as this became the way of dealing with problematic officials for the growing conspiracy. All the replacements were enchanted with the same loyalty to Geppetto as his children possessed. But the Blue Fairy, fickle at the best of times, grew bored of this, leaving Geppetto with a problem.

He had the lords he controlled send their court magicians to tutor him, and to offer their services. He eventually learned to imprison the Blue Fairy, using her as a power source.

Geppetto grew weary of his co-conspirators’ use of the replacements to further their own ends rather than the greater good, and so replaced them. He continued replacing local government officials from neighbouring regions, and the path to establishing his empire presented itself without him fully noticing at first.

On realising the inevitable progression to make the worlds peaceful, he created a figurehead Emperor. It was a giant whose intimidating presence would control such an Empire more than an old man could hope to.

The Empire continued in 50-year cycles of expansion and consolidation. Eventually he’d taken most of the European Fable worlds before turning his attentions to those of the Arabian Fables.

The standard procedure for conquered lands was to keep the existing government if they’d surrendered, or their own appointed governor if there’d been any resistance. In the latter case the previous rulers would have been slaughtered.

Geppetto remained in his cottage workshop most of the time. He left governance of the empire to his children, and select other fables – such as the Snow Queen, Inquisitor General Hansel, and the Nome King – whose loyalty was ensured with magical draughts they drank regularly.

He had little interest in conquering the refugees of Fabletown yet, since that would mean invading the mundane world. He had but limited intelligence about it – and what he had said it had little magic to make it dangerous.

He did, however, realise the fables there could present a possible threat – however minor – which should be addressed, and a number of magical items which should be reclaimed.

He sent a small force of his wooden soldiers, under the command of Baba Yaga, to subdue Fabletown. Neither Baba Yaga nor any of Gepetto’s children returned.

Shortly thereafter the Empire was disrupted by the murder of several Imperial governors, culminating with the assassination of the Emperor. The assassin, Boy Blue, was captured by the Snow Queen and taken to Geppetto’s cottage, where the woodcarver restored the Emperor while they talked. 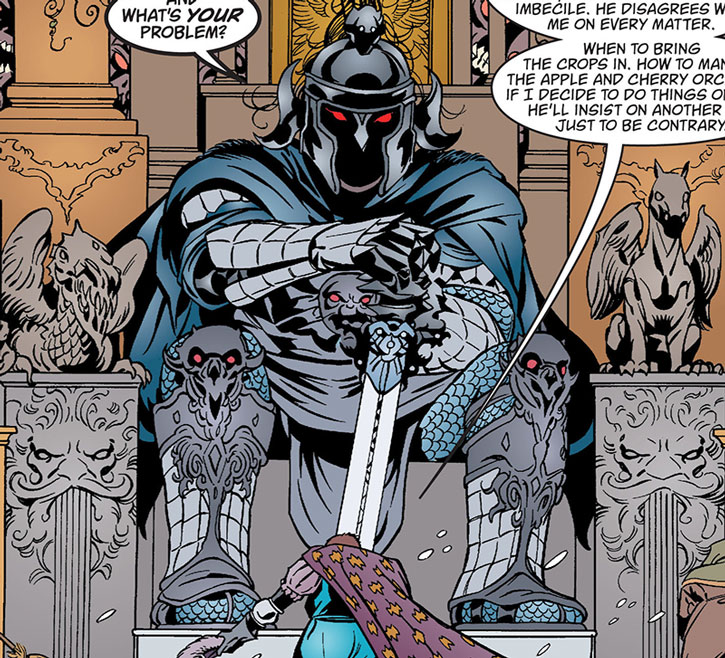 In exchange for Geppetto telling his tale and bringing Red Riding Hood to see him, Blue returned the remains of Pinocchio from within the Witching Cloak. Geppetto quickly repaired his son, returning him to life.

It soon became apparent that Blue had allowed himself to be captured to get close to the Adversary. He easily escaped, although he was unable to hurt Geppetto.

Confused, Pinocchio chose to stay with his father when Blue left. This incident stoked Geppetto’s rage against Fabletown.

This anger only intensified when Bigby Wolf appeared at his cottage one night. He warned Geppetto that any harm inflicted on Fabletown would be visited on the Empire several times over, then triggered the explosives in the sacred grove used to create the wooden soldiers, destroying it.

Geppetto had his advisors begin drawing up plans for the invasion of the mundy world, or at least its eradication. Fabletown proved faster in their planning, using a mix of mundy technology and fables magic. They bombed the gateways linking the imperial homeworld to its empire, and snuck Sleeping Beauty into the imperial capital where she put the imperial bureaucracy to sleep.

It was almost that fast, and then they came for Geppetto, as did Pinocchio. His wayward nature had drawn him away, despite Geppetto’s attempts to have him found. Rather than simply wandering, he’d returned to Fabletown with information to trade for Geppetto being allowed to sign the Fabletown Compact.

Geppetto was left with little choice but to sign it, no happier with the situation than were his new neighbours. When Fabletown had to flee to the Farm, a gang of animal fables caught him wandering in the woods and buried him. He got out, and it only added to his fury at the situation. 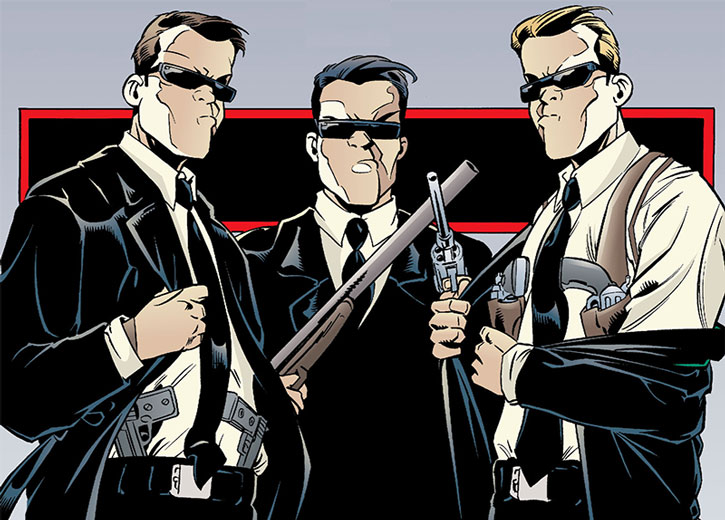 Making an alliance with a local tree spirit, he gained a pair of bodyguards in the form of the dryads Prince Aspen and Princess Alder.

When the danger posed by Mister Dark held Fabletowners in fear, Geppetto tried presenting himself as the only one who could save them. They were concerned enough that he actually swayed some, until Rose Red stepped in and asserted her authority over the Farm. She did accept him as an advisor, but that wasn’t enough for Geppetto.

Even the Blue Fairy appearing seeking vengeance didn’t slow his grasping for power. Beast delayed her wrath for a while, and Geppetto doesn’t appear bothered. Having moved to Haven, he’s been trying to get access to the grove of trees his wooden soldiers were transformed into, in yet another plot to regain his rightful power.

Geppetto can play the part of the calm, amiable old man if he chooses, though these days he rarely chooses to do so. He’s more likely to be arrogant, bitter, and scheming, playing on people’s fears to control them. He doesn’t seem inclined to fear much, probably from centuries of having the most powerful protective spells known cast on him.

He’s been shaped by centuries of disappointment and disgust of others, becoming a bitter and ruthless old man whose temper flares when crossed. He’s obsessed with the drive to conquer everything, and has developed a hatred of Fabletown.

The wooden soldiers see “meatheads” (animal life) — other than Geppetto, of course — as inferior, and expecting due obedience from them. They constantly remind the meatheads of this. They take particular offence at being mistaken for humans, often reacting violently to the insult.

“Any hint of treason needs to be nipped in the bud, my son, lest it spread for certain. In most cases, simply being exposed to seditious acts or material is as bad as actually perpetrating it. Some must die for what they inadvertently witnessed, for human behaviour never changes. Folks will gossip about what they see and thus aid the enemy. The poison slowly and surely disseminates through the body of the empire. In the long run it’s not important that we execute the right people. As long as we publicly and harshly punish someone, any someone will do.”

“It’s the simple calculus of benevolent government. A great leader is one who won’t shirk from doing the often terrible things that are required to protect the majority. It seems a paradox, but you must often do a great evil to accomplish an even greater good. Keep your heart hard, son. That’s the eternal price of being parent to entire worlds. Others can occasionally afford to indulge their natural compassion, son, but not us.”

Lou: “It is my fondest desire to bust a host of caps into a multitude of fleshy personages.”

Connections:
Pinocchio and his other children (High).

Advantages:
Iron Nerves, Life Support (No need to Eat, Drink or Breathe), Stabilization, Misc.: Wooden Soldiers can burn, but burn slowly (if a flame-based attack reduce their Current BODY Condition, they will continue being active without penalties for (12 minus the absolute value of their negative BODY Condition) Phases, during which they’ll have Flame Being with half as many APs as the attack that reduced them to zero BODY (round down)), Misc.: Wooden soldiers remain active as long as their head is relatively intact, and can receive new limbs or even a new torso if they have been damaged.

Bonuses and Limitations:
Growth is always on and is already factored in (-1).

Equipment:
The Emperor uses a sword in combat. While it may possess enchantments, its main power is being a big-ass sword [BODY 12, EV 10 (13 w/STR)]. 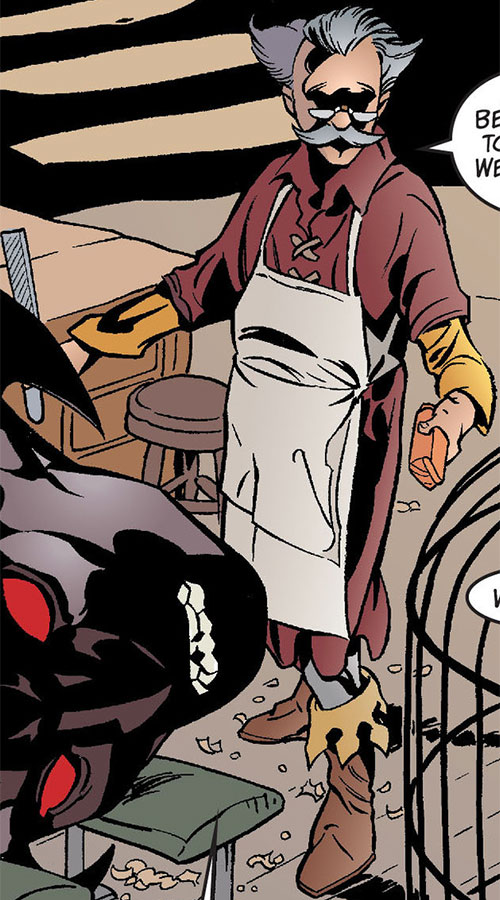 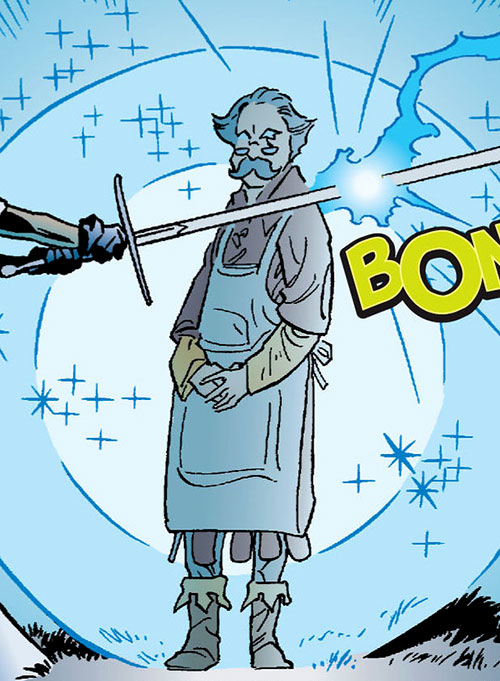 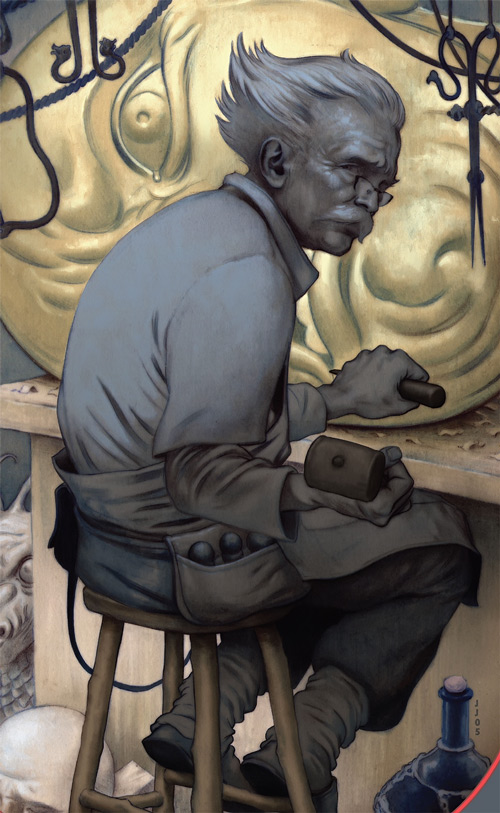 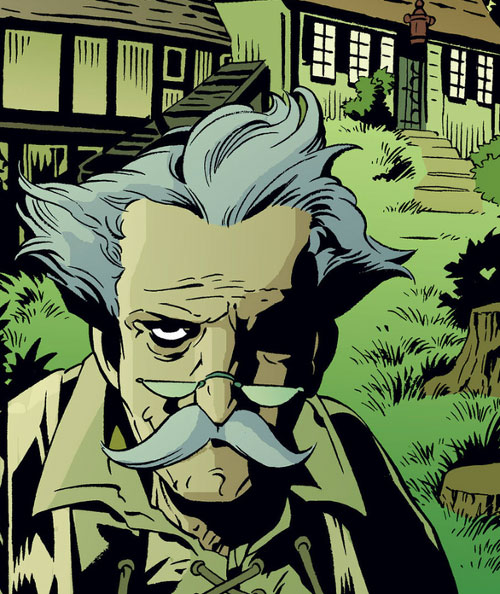 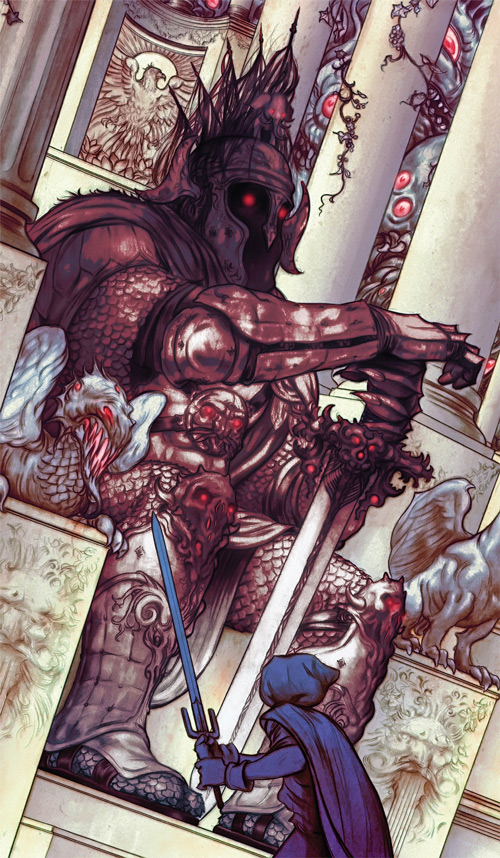 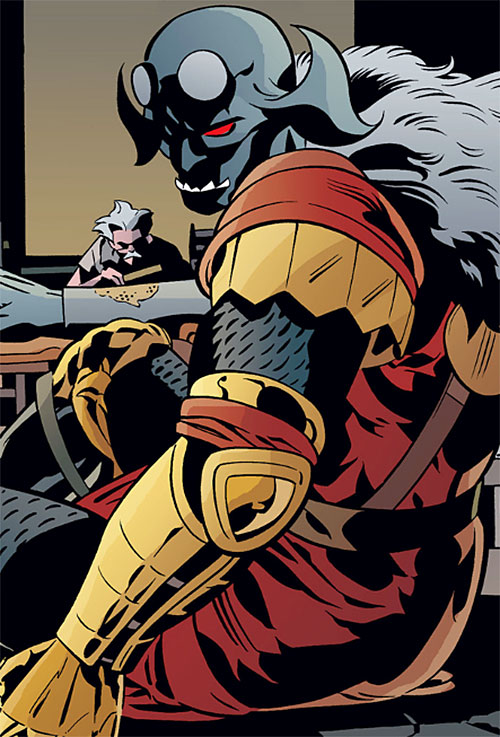