As one might expect from somebody called “the Huntress”, Aela is an expert archer, stalker and outdoorswoman.

She’s also a seasoned mercenary warrior, with extensive experience in eliminating Skyrim menaces such as bandits, monsters, the undead, renegade warlocks, giants, etc. Aela seems fast and decisive, with the wiry strength to draw her bow. 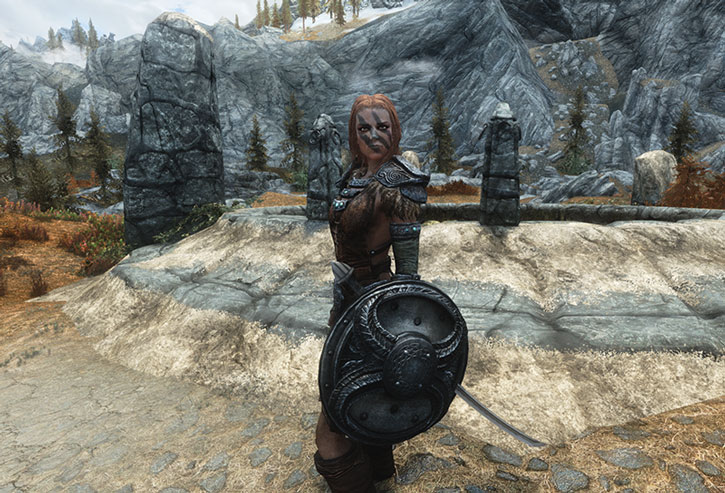 As a Human of the Nord ethnicity (well, group of ethnicities) she is almost supernaturally resilient to cold. Nords like to show off their toughness by braving the frigid Skyrim climates in light outfits. However even a Nord’s durability has its limits. The cold of Skyrim can easily kill even the natives if rain, snow, night and/or wind become a factor.

She chiefly fights as an archer, using a hunting bow with a high draw strength. Her broadhead arrows are forged in steel at the Skyforge, and can thus pierce hide and metal that would ignore more common projectiles. She also carries a Skyforge steel dagger for self-defense or when operating in cramped quarters, and wears high-quality light leather armour.

If close combat is a reasonable possibility she’ll also arm herself with a long steel sabre (the sort usually used by cavalry) and a custom-forged Skyforge steel shield. Like most Companions, she often looks like a walking arsenal.

Aela is also secretly a veteran werewolf (shouldn’t it be wifwolf  for women ? But I digress).

Though she can be overcome by sufficient numbers or a sufficiently mighty monster or hero, she probably can take on a half-dozen ordinary soldiers or any normal animal (including the very dangerous bears of Skyrim) by herself in lycanthrope  form. Being a lycanthrope, she’s practically immune to disease.

Werewolves run fast, see in the dark, can perform very dangerous pouncing/charging attacks, and can let out blood-curdling howls that can easily panic lesser opponents. They can also regenerate, but that requires ripping out and, well, wolfing down the heart of their fallen enemies.

Wolves instinctively recognise werewolves in their animalistic form as alphas, and some werewolves can reportedly conjure magical wolves to hunt with them by howling.

Her werewolf state can only be sustained for a few minutes, and she’ll need to rest (usually a good night’s sleep) before she can do it again. It also makes it impossible to speak, manipulate ordinary objects, use magic, fit into narrow openings, etc. Thus her lycanthrope form is usually used as a secret weapon.

Being Human in Tamriel

On the continent of Tamriel, the ancient history of Humans is largely unknown. Humans learned to write late in their history, and they seem to mostly come from a continent or island somewhere in the North. Scattered Humans made the trip to Tamriel over the centuries, and generally went native in these new lands dominated by Elves.

However, a large settlement was eventually founded by the hero Ysgramor  and his followers after they fled a war. Theirs was an autonomous Human territory, not part of Elven lands. 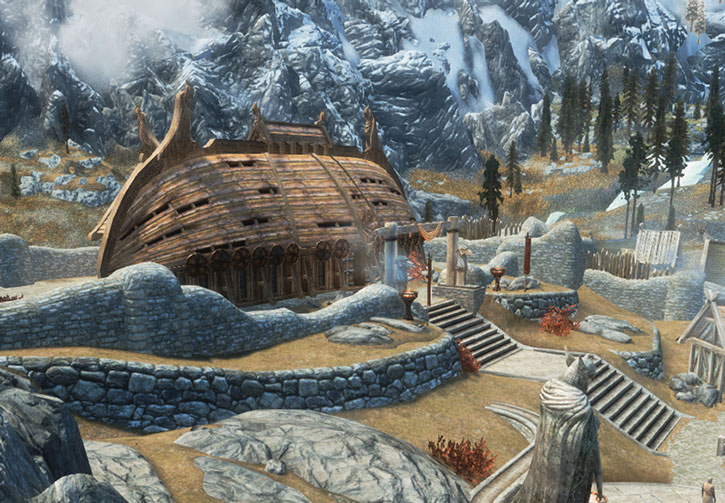 Jorrvaskr, the HQ of the Companions, includes Ysgramor’s boat.

This settlement was attacked and razed by the Elves, with only Ysgramor and his two sons surviving. Like with most of history on Tamriel, there are conflicting accounts as to the reasons of this carnage. What is known without ambiguity is that Ysgramor travelled back to Human lands, then vengefully returned with a warband called the Five Hundred Companions.

These fierce Human warriors warred against the Elves, and the Human territories became much larger than before. The followers of the Five Hundred became a new Human ethnicity on Tamriel, called the Nords. The territories they carved out for themselves correspond more or less to the modern region of Skyrim.

Hrotti Blackblade, a direct ancestor of Aela the Huntress, was apparently one of the Five Hundred.

The Five Hundred Companions eventually stopped their conquests due to attrition, but their traditions remained.

For instance, Ysgramor’s boat was carried inland to the site of a powerful magical forge feared by the Elves. This ancient place being adorned with a huge statue of a raptor bird, the Nords called it Skyforge, and the boat was turned into a building headquartering those Companions still willing and able to fight.

Eventually, a mighty Nord hero called Talos  conquered much of Tamriel in the name of Humanity. He with the Bretons – a ethnicity of Humans descended from pre-Ysgramor settlers and who by then had much Elven blood in their veins. Talos would create the Third Empire as Emperor Tiber Septim, and reportedly ascended to godhood.

The Septim Dynasty eventually collapsed in civil war, and over these decades the Empire lost its might. The Elves regained their strength and reconquered some territories, and several major catastrophes — such as the eruption of the immense Red Mountain — also led to loss of turf and strength for the Humans. 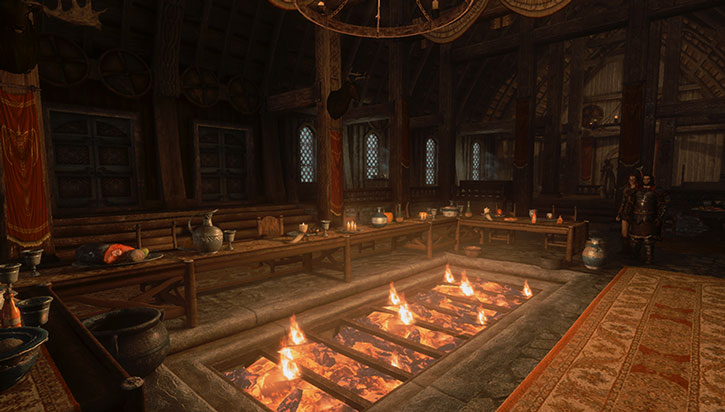 The main hall within Jorrvaskr.

With the Empire at its weakest, the Elves attacked. They very nearly broke the Humans and the capital was burned and ransacked, but Emperor Titus III turned the tide at the last minute and the Elven army was trapped and massacred in the Human capital.

Still, the Empire was left too weak to dispute the terms of peace, and the concordat with the Elves imposed harsh conditions upon the exhausted, bloodied Humans.

The Nords living in Skyrim were furious about the peace treaty, particularly as it banned the worship of Talos. Many Nords came to see the Empire as quislings who were but the enforcers of the will of the Elves, and to speak of rebellion against the Empire and of blood vengeance against the Elves. Thus were the Stormcloak partisans born.

However, the modern inheritors of the Five Hundred Companions were not at the forefront of this movement, and stayed apolitical. Things had changed over the centuries.

A neat but short cover of a traditional Nord prophetic song, which in-game is usually performed by bards in inns. This fan version has more modern arrangements and the last stanza is sung in Nord (with a slight Mexican Spanish accent that actually makes it more Nord-sounding, somehow), so that’s good atmosphere for this article.

As the centre of gravity of Human presence on Tamriel shifted southward with the establishment of the Empire, the successors of the Five Hundred Companions became but a regional player.

The “Five Hundred” number was eventually dropped. Most of the 500 were dead by the time the host of Ysgramor stopped, and though they symbolically kept the number to honour their dead it became pointless once the last of the originals passed away.

Furthermore their number continued to diminish and they became an increasingly local player, chiefly fighting to protect the Nords in Skyrim. By the time of The Elder Scrolls V: Skyrim, the Companions are less than a dozen and chiefly fight in the Hold of Whiterun, within a day’s ride of the Skyforge. 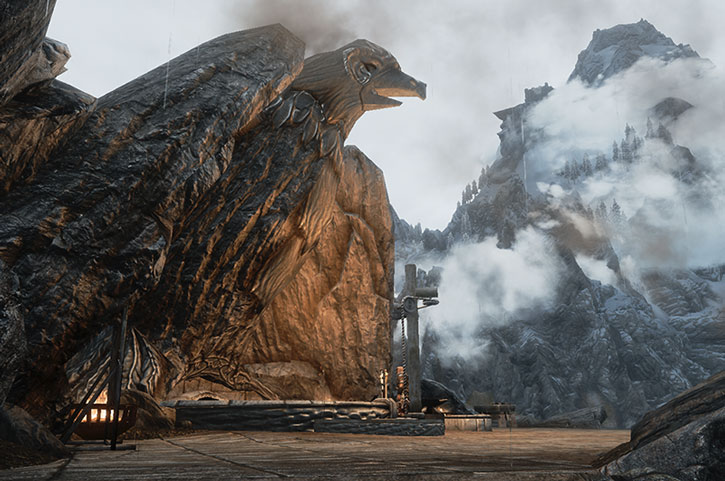 The Skyforge at Whiterun.

The Companions have also become a mercenary force. They mostly fight for pay, taking on the likes of bandits, monsters, and wild beasts threatening less martial locals. One presumes that they mostly get paid by the authorities. The Companions may be few, but they are genuinely skilled and courageous. A team of three can take down one of the powerful Giants.

The modern Companions keep most of the near-anarchistic traditions of the original Five Hundred. They have the barest indication of ranks, though seniority and strength clearly count. Much of their earnings are apparently shared to keep their longhouse running and supplied with free food, ale, firewood, etc. for all Companions – and pay the servants and the master blacksmith manning the Skyforge.

The Companions do not discriminate based on race, age or gender. If the wisest Companion thinks that an applicant has a true fighter’s spirit and strength, they’ll allow for a trial period.

The Companions often train with each other to learn new skills. For instance Aela will teach any interested Companion how to become a superior archer.

The inner circle of the modern Companions — the most skilled, senior and respected ones — holds a secret. They are all werewolves, and sufficiently skilled Companions will be initiated into the inner circle by drinking the blood of a senior Companion and thus becoming a werewolf.

Even the junior Companions do not know that their seniors are lycanthropes. 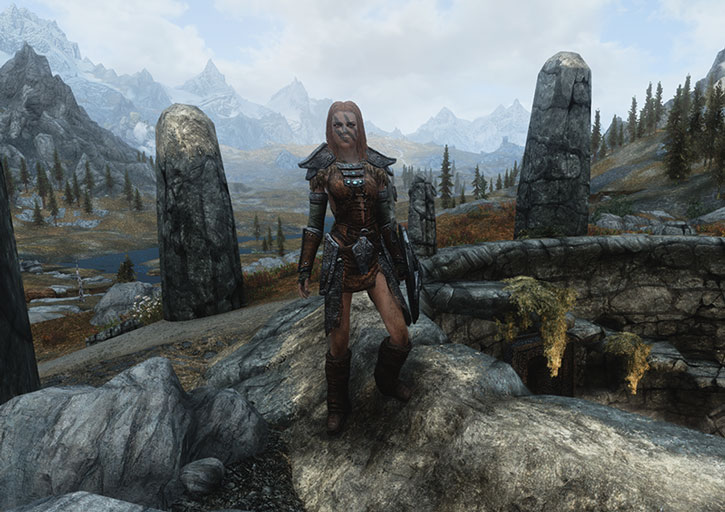 The modern Companions see their shapechanger nature as a boon, giving them great strength and ferocity to fight their enemies. However, most people are terrified by werewolves — hence the secrecy.

The Companions consider that true warriors who receive training from more experienced werewolves can fully control their transformations and behaviour. They are apparently correct in this.

In recent years a rift has begun to appear as to how desirable this bestial nature is. Some have grown to see it as making them less than men and thus potentially dangerous as to their fate in the afterlife. Some consider that it makes them closer to the primal nature of the world, and thus a better fit with the natural order in a “red in tooth and claw” sort of way.

Aela is the most ardent supporter of the latter stance.

Aela’s light armour is a glorified minidress, and it has a bare back to boot – perhaps to boast that a Nord woman never turns her back on the enemy.

Modern body armour is more sensible, and Aela’s sort of Nord leather armour is usually found in ruins, tombs and history books. It is entirely possible that it belonged to an ancestor, perhaps all the way back to Hrotti Blackblade, and was used by the lineage and regularly repaired as a glorious heirloom.

Aela is a tough fighter who likes action, the hunt, fighting and the Skyrim wilderness. She is openly dismissive toward anybody who doesn’t match her standards of courage and martial excellence – and eagerly follows the Nord traditions of warriors challenging, roasting and teasing each other to prove their bravery. 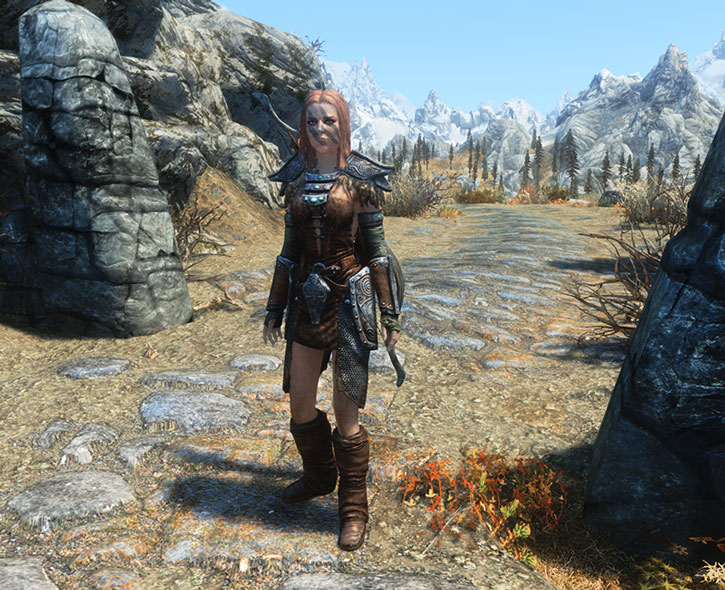 The Huntress is impatient, abrasive and loves nature and the natural order. She isn’t a big fan of comfort, civilisation or book learning. Once her respect has been earned through great feats of arms she’s markedly less antagonistic and becomes a strong and dependable sister-in-arms, though there’s still a sarcastic edge to her.

Aela is particularly proud of being a Companion and a werewolf.

“The intensity of the hunt is special, isn’t it ?”

(Reverting to Human form) “I’m sorry you had to see that.”

Note:
The Alter-Ego can be maintained for 15+1d10 Phases, and can only be used again on the next day. Eating a fresh heart from a corpse (which takes one Phase) will prolong this duration by three Phases.

Source of Character: The highly popular The Elder Scrolls V: Skyrim computer RPG. Aela is voiced in-game by Claudia Christian (probably best-known for her role as Cdr. Ivanova in B5). 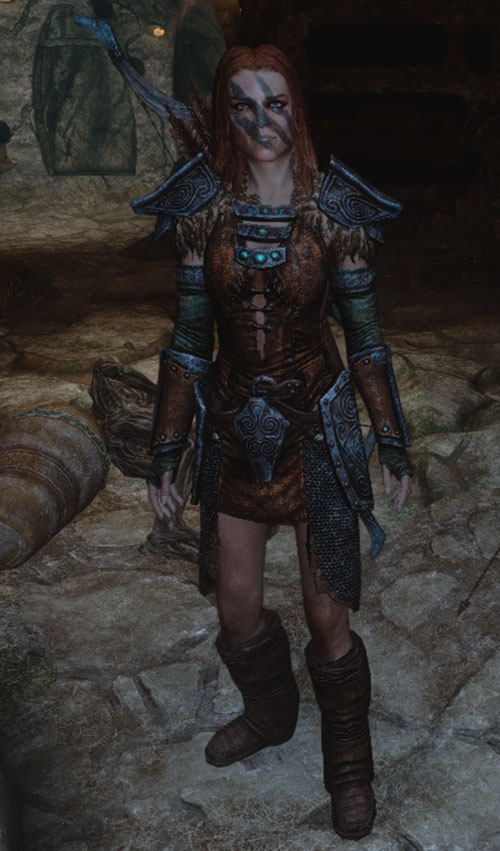 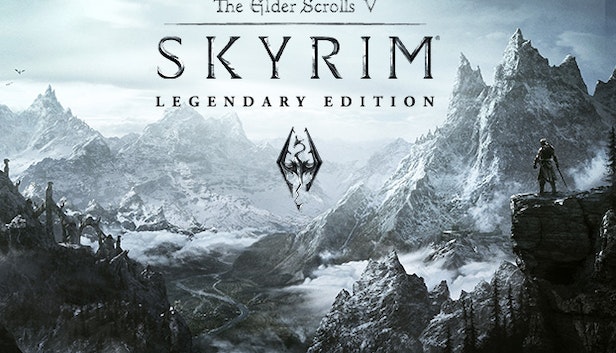 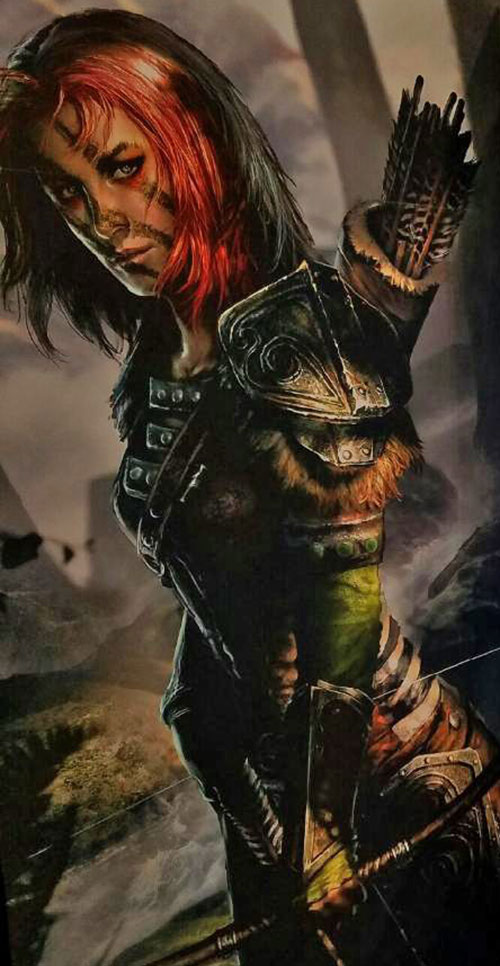 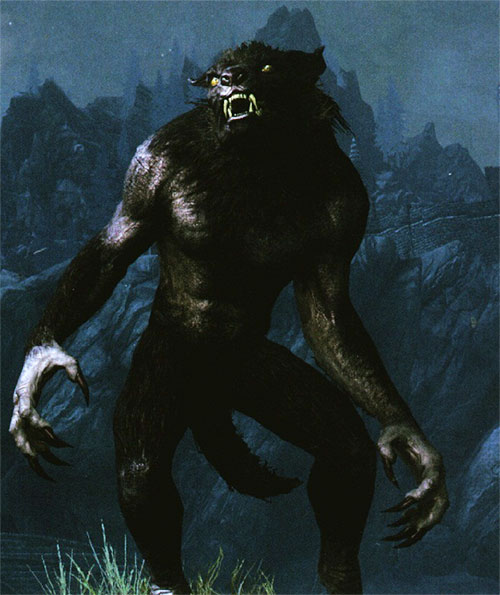