Mr. Hazzard is a highly trained special operations soldier and USMC veteran. He is in remarkable physical shape and with excellent resolve and pain tolerance.

Project Reptile stripped his brain back and gave him conscious access to its reptilian core. The reptile brain was then given access to energy, namely something based on Hazzard’s angriest and most violent memories.

This gave it the power to explode another person’s heart at will (in DC Heroes RPG terms, Mental Blast). But a highly athletic person such as Daredevil (Matt Murdock) will likely require prolonged effort to kill.

Hazzard was an USMC veteran, selected by an unspecified US agency working with the Corps.

His file was picked by their lead medical researcher because he had “all the right childhood neuroses”. These would make the jarhead excellent material for advancing this scientist’s weird theories about the human brain.

The disciplined Hazzard, having been told that it was all to make him better at his job, ate all the drugs, watched the films, got hooked to the brain machine and was exposed to the bomb tests – all part of Project Reptile.

He gained a deadly super-power, and soon became an elite agent and assassin. But Hazzard became increasingly sick and suffered from schizophrenic distress due to the constant experimentation and torture from the researcher. Still, he patriotically soldiered on.

This lasted until he learned about the ghastly end of fellow super-soldier Nuke. Nuke had died fighting Daredevil and Captain America (Steve Rogers) in Hazzard’s own childhood ’hood, New York City’s Hell’s Kitchen.

Though Nuke was a different project from a different agency, Hazzard realised it was his unavoidable fate to descend into madness, flip out and kill a lot of people. Refusing to trigger such a carnage of innocent Americans, he decided to go home one last time, see his beloved mother one last time and kill himself. He deserted.

The agency then hired the highly reputed freelance spy, the Black Widow (Natalia Romanova). She was to find and terminate Agent Hazzard before he would go postal.

After a visit to her former lover, Daredevil, she planned to hunt Hazzard alone? But she then realised that Daredevil’s costume would likely be an asset against the schizophrenic Hazzard. Perhaps enough to drive him to suicide and spare her from having to kill him.

The Widow and Daredevil confronted Hazzard and survived the encounter – but Hazzard’s death weighted heavily on the Black Widow.

Hazzard’s corpse was quickly found by the agency via tracers on the Widow. They managed to bring him back from death through built-in measures within Hazzard’s body, which preserved his brain while simulating complete cardiac arrest.

The anonymous doctor then announced he could likely salvage and reactivate Hazzard, without those layers of his brain that had made him go AWOL. While this was underway, however, another agent of Project Reptile, Agent Crock, escaped and clashed with the Widow and Daredevil.

The Widow managed to save Crock, assuaging her Guilt over the death of Hazzard. It was then strongly implied that she went back to the unnamed agency, her former employer, to deal with the doctor.

Jack Hazzard is an handsome, athletic and muscular man with an buzzcut. Near the end of his life he was always sweating and seemed sick, though still very robust.

The experiments that gave him his power left him with dead, reptile-like eyes – the eyes of a killer.

Hazzard was a particularly tough marine and an ardent patriot.

As he felt himself descending into madness, he clung to his patriotism with great fervour, so even madness would not take away his love for his country. While the psychosis made him very touchy about possible insults to the flag and other national symbols, his values allowed him to stay more or less coherent.

He was also a devout Christian, having been raised since early childhood to fear and respect the Lord. While he was having an episode the sight of Daredevil thus made him go ballistic and he tried to kill “Satan”. But he eventually shook the cobwebs and realised it was just a costume.

In moments of stress Hazzard tends to hallucinate that people who were near him all had the face of the doctor who ’treated‘ him – apparently always right after Hazzard had punched him and broken his glasses out of pain.

Noises and scenes reminding him of war tended to induce stress and a general feeling of being on a battlefield, though not to the point of inducing a Traumatic Flashback.

Hazzard kept an insurance prospectus on his person, titled The American dream. It had a cliché photo of a beautiful 1950s couple standing in front of a white-pickets-fence-house and a classic car.

As his sanity kept degrading, Hazzard invented stories based on it. About “his wife”, “his child” and “his house” and how he would come back to them “once the war will be over”. While he was aware it was a fiction, he chose to believe in it to soothe his suffering.

“Let’s see your salute, boy. To the flag. To the red white and blue. That flag chokes me up. Give me some buddies, a home game, with beer and hot dogs…”

“Look at me. I’m a cowboy. The last pioneer on the last frontier. Here in the good old united states of America… and to the Republic… for which I stand…”

(Giving his gun to Tommy) “This is a monster you got in your hands. Pull that trigger once and *you’re* dead. Your whole life change. Never be the same again.”

“‘Thou shalt not kill’. You heard of that one ? Well, they tricked me. They ordered me to kill. But they didn’t tell me how to stop.”

“Eternal damnation, they call it. They threaten you with it. Promise it to you. Well, give it to me. I’d welcome the pit.”

(To the Black Widow) “I see now who you are… and super-heroes can’t save me. I just want what everyone wants — to go home. To some land, to a wife, to… do you hear me ? That was supposed to be the end of the road in the sunset, the carrot on the stick… So what’s a good mule like me get instead ? You’re very beautiful… you and your gun. Go ahead. Pull the trigger. Do your job.”

Bonuses and Limitations:
Mental Blast can be Indirect, is always Invisible, and never generates Knockback. It has a Range of but 02, targets BODY/BODY and is its own AV.

Connections:
None (asides from the one derived from his Credentials). 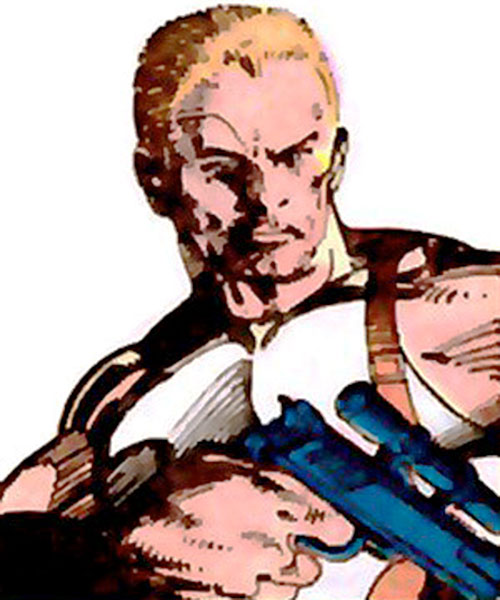 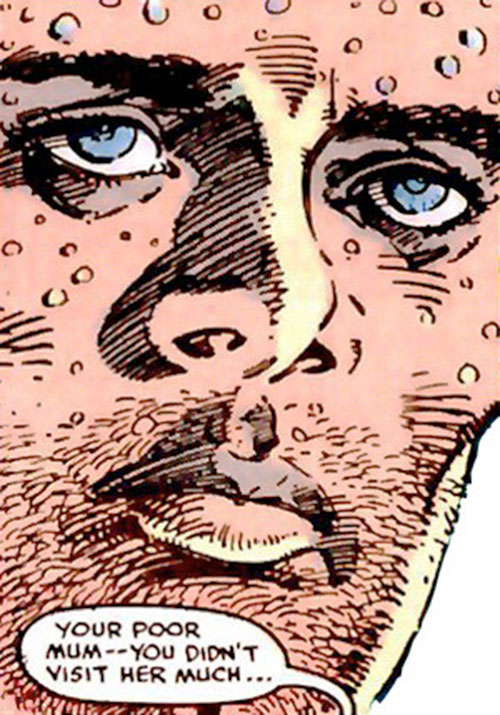