As with every Agent in the Matrix, Agent Smith has physical capabilities far beyond those of a human being. He can throw punches hard enough to shatter concrete and leap prodigious distances (in DC Heroes RPG terms Physical Attributes, Jumping). Agent Smith is also programmed with extensive combat skills (Martial Artist, Vehicles, Weaponry).

He can even slow time over a very small area. Though he is rooted to the spot while using this ability, Smith can still duck and weave quickly enough to literally dodge bullets (Superspeed).

Agent Smith can appear anywhere in the Matrix where a human is present by possessing that person’s body. Their form consequently morphs  into Smith’s body, including earpiece and sidearm (Self-Linked Personality Transfer). He can only use humans who are still plugged into the Matrix as host bodies. Hacked-in personas like the partisans are immune to possession.

If that host body is killed, then Smith can simply take over another one nearby. This makes him effectively immortal unless he is somehow attacked Mentally (Self-Linked Spirit Travel).

Agent Smith can program the Matrix to alert him when something out of the ordinary occurs. Examples include a major gunfight or if humans in the program see specific people (Alert).

In one instance, Smith lost track of escaping resistance fighters only to reacquire them when a homeless man saw the rebels. Another telling example is when the fleeing Neo ran into a crowd and Agents began to appear all around him.

It is possible for Agent Smith to make physical alterations to the Matrix and its inhabitants (Matter Manipulation). An example of this include melting Neo’s mouth shut when he was still part of the Matrix. Another was turning the windows in Morpheus’s safehouse into bricks.

Yet, they almost never use this ability. This is both because careless use could reveal the nature of the Matrix to bystanders and because it may cause program glitches such as a “déjà vu” where animate objects repeat a cycle of motion.

Agent Smith has been active in the Matrix long enough to begin developing his own personality. Consequently, he is somewhat better at interacting with humans than the other Agents. But at the same time this made him vulnerable to emotional considerations overriding his logic (Charisma, Drawbacks).

The Matrix is a late 22nd Century virtual reality designed to resemble late 20th Century/early 21st Century Earth. It was created by a group of AIs known only as the Machines. These have vast “farms” of humans held in pods and used as batteries for the Machines’ operations.

The minds of these captive humans live out their lives in the computer-generated dreamworld of the Matrix. This leaves them oblivious to their true existences and thus completely docile.

The Agents are autonomous software programs. They travel throughout the Matrix by possessing the residual self-images of humans (that is, their personas within the Matrix). Agents take whatever steps are necessary to keep their captives from recognizing the nature of their imprisonment.

I was cautioned to surrender

While the rebels can give themselves slightly superhuman abilities by manipulating the Matrix, no human can match the ability of the Agents. Nor can they do anything to counter an Agent’s ability to “resurrect” itself.

Consequently, the only reasonable response of a resistance agent confronted with an Agent is to flee the scene, for no human other than the Anomaly (a.k.a. Neo) has ever beaten an Agent in combat.

This I could not do

Agent Smith had been running in the Matrix for a very long time. He had become the lead Agent in tracking down resistance fighters. Indeed, it had become an obsession with him. Smith was fortunate enough to make contact with a turncoat rebel named Cypher, offering the traitor a life of paradise in the Matrix in exchange for Morpheus, leader of the resistance.

Smith began an arduous interrogation of the captured Morpheus. He hoped to extract vital information about Zion from him that would allow the Machines to find and destroy that final bastion of humanity and end the war. Before Smith could extract the necessary information, the resistance fighters Neo and Trinity rescued Morpheus.

Trinity and Morpheus escaped, but Smith was able to cut off Neo’s escape route. Unfortunately for Smith, Neo was the Chosen One, with a hitherto-unseen proficiency for manipulating the Matrix. Neo was able to defeat and then destroy Smith, the first known example of a human beating any Agent in combat.

As was typical for Agents, Smith was a nondescript Caucasian male of average height and build. Agent Smith was neatly attired in the typical Agent dark gray suit with black tie, silver tie clasp, and rectangular sunglasses.

He also wore the ubiquitous translucent plastic radio earpiece in the right ear and carried a Desert Eagle in a shoulder holster. Overall, he looked like a stereotypical Secret Service bodyguard, a disguise that was ideal for his role.

Agents tend to speak in a monotone. But Smith’s speech developed its own unique cadence with frequent pauses for effect.

When Smith goes into superspeed to dodge gunfire, he moves so quickly that he appears to be blurred multiple images overlaid on top of one another, shifting back and forth in place with a metallic whirring noise.

Unlike his rather bland brethren, Smith had been active in the Matrix long enough to begin developing a unique personality. This made him slightly better than most Agents when it came to talking with humans.

For example, during an interrogation he might take off his sunglasses to make eye contact and hopefully encourage the subject’s trust. Smith also used more subtle methods to foil the resistance. Examples include trying to turn potential partisans against them, or negotiating deals with rebels who were dissatisfied with life outside the Matrix.

Though he was willing to try more sophisticated methods when appropriate, Smith would not hesitate to engage in combat if it achieved his ends. Indeed, he even seemed to relish the opportunity against particularly troubling foes. The serial immortality afforded him by his Agent abilities left him free to engage in suicide tactics.

As with other Agents, Smith almost never displayed his full abilities in front of normal people unless he could subsequently eliminate all witnesses. The only exception to this policy is when he was in hot pursuit of an extremely dangerous partisan.

Agent Smith had begun to philosophize about the nature of humans and their interactions with the machines. His conclusions regarding humans were unfavorable to say the least. He actually felt that he was being polluted by their presence. By the time that Morpheus discovered Neo, Smith was desperate to end the rebellion so he would no longer have to interact with humanity.

Smith’s loathing of humanity was so great that he actually began taking delight in bringing down rebels. Thus, he let his hatred of humans cloud his judgment at times, in stark contrast to the dispassionate demeanor of his fellow Agents.

This is expressed most frequently by Agent Smith’s need to demonstrate his superiority to humans. During Morpheus’s interrogation Smith wasted valuable time subjecting Morpheus to various insults. A short time later, he lost his first fight to Neo by taunting Neo when he had the partisan trapped in front of an oncoming train instead of simply finishing the job of beating Neo to death.

Some of Smith’s fellow Agents were nonplussed by his behavior at times. Yet they still recognized his expertise enough to seek him out for suggestions regarding the steps to take in fighting the partisans.

Neo: “You can’t scare me with this Gestapo crap. I know my rights. I want my phone call.”
Agent Smith: “Tell me, Mister Anderson, what good is a phone call if you’re unable to speak ?”

(While interrogating Morpheus): “I hate this place. This zoo, this prison, this reality, whatever you want to call it, I can’t stand it any longer. It’s the smell, if there is such a thing. I feel saturated by it. I can taste your stink and every time I do, I fear that I’ve somehow been infected by it. I must get out of here, I must get free… Once Zion is destroyed, there is no need for me to be here… I have to get inside Zion. You *have* to tell me how.”

Agent Smith could be used in any of the following scenarios, either by himself or in conjunction with other Agents. See the Agents write-up for details.

Agent Smith could be used as a guardian for most any virtual reality in which the PCs find themselves trapped. Characters such as the Flash who can think at superspeed might find themselves at great advantage in such surroundings.

As entities separate from the Matrix, a covert arm of the DEO could have created Agent Smith by subverting a powerful metahuman. He could then be used as a subtle means to control the metahuman population as much as possible.

In a campaign using mutants like the Marvel Universe, Agent Smith might be created by the Sentinels to stalk mutants in hiding. He would use molecular control similar to Nimrod’s to alter standard humans to fit his physical parameters as necessary.

In a mystically oriented campaign, Agent Smith could be a servant of a repressive Lord of Order. His mission would be to suppress more free-form sorcerers such as the partisans from practicing their art. In this case, Agent Smith’s powers would all be Mystic Linked.

Note:
The Credentials are used by Agents to secure cooperation of human law-enforcement groups in the Matrix without attracting unnecessary attention. 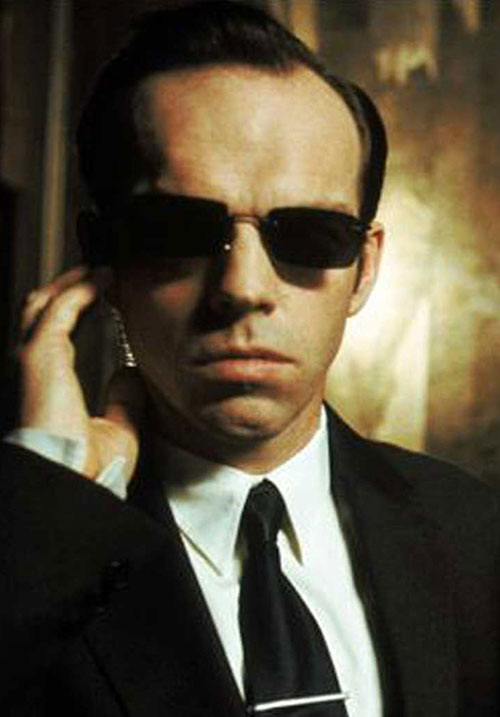 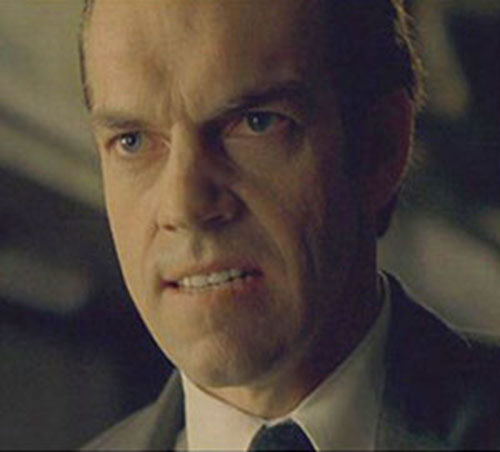