Modus Operandi:
Covert operations by the Agents, cleaning up illegal Atlas operations and changing the world for the better.

Bases of Operations:
Numerous, but based out of the one under San Francisco.

Organizational structure:
Jimmy Woo is Grand Khan of the Atlas Empire, and leader of the Agents.

As the inner circle of the Atlas Empire, the Agents have access to the organisation’s vast resources. These include bases all around the world, advanced technology, and experts in every field.

In DC Heroes terms their High Level Connection to Atlas brings with it Rich Friends, Omni-Scholar (with a slight delay), Expansive Headquarters, as well as an army at their beck and call should they wish it.

They also have access to the Dragon’s Corridor, and other-dimensional space which has portals in numerous locations on Earth. It requires scales of a dragon to locate the portals, and to protect travellers from the radiations of the place.

Following Venus’ abduction Bob placed transceivers in each of them to allow him to locate them if necessary.

He also tried to recruit Namora. She was busy with other pursuits, but helped him recover M-11 The Human Robot from where it lay underwater. Grayson worked on the robot, and soon had it working and part of the team.

Nicknaming themselves the G-Men the team tracked down and rescued the President, although the Claw escaped yet again. They operated for another six months, given the official designation of Department Zero. While technically a part of the FBI, their external creation led to friction with some parts of the Bureau, especially Hoover  himself.

They carried out a number of operations, mainly against the Yellow Claw. They stopped mind controlling insects being developed in Cuba, with the aid of Logan. They stopped electronically reanimated dead bodies. And they stopped the rampage of an awakened Kree technology in Waikiki.

Their final mission was investigating a military plane which appeared and disappeared at irregular intervals and positions outside a military base, with a skeletal pilot inside. Joined by pilot Cary ‘Kit’ Dekum they discovered the Dragon’s Corridor. This is an other-dimensional  space the Yellow Claw used to travel quickly around the world.

The Claw would let Soviet agents use it for their operations. The group disrupted this operation, but as Kit flew a captured plane away, they recognise it as the one stuck in the loop. Hoover used Kit’s death as an excuse to shut down Department Zero, and the members returned to their lives.

Nearing retirement, Jimmy was mortally wounded while covertly investigating the Yellow Claw. S.H.I.E.L.D. — who Jimmy worked for at this point — investigated, bringing Gorilla Man in from another section for questioning about their history. Gorilla Man had already been contacted by M-11 and Bob Grayson, and they broke Jimmy out.

Uranian technology restored Jimmy to the state he’d been in when Bob had last scanned him, in 1958. Young again, with no memory of the intervening years, Jimmy led them in investigating the lead he’d almost died following: the Atlas Foundation.

During the acquisition of his notes they encountered S.H.I.E.L.D. agent Derek Khanata, who’d been assigned to the case and willingly accompanied them. 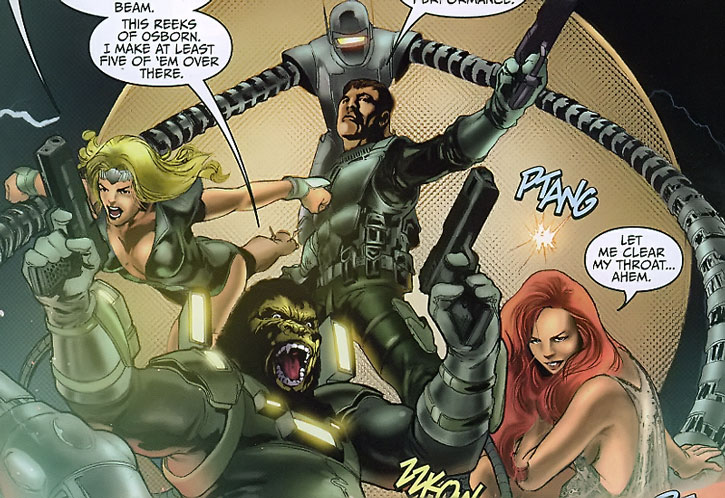 Locating Venus, they convinced her to rejoin, despite being accosted by agents of the Yellow Claw. Following M-11 as he determinedly located the resting place of the supposedly dead Namora, they found her actually only in suspended animation to protect her from a poison. Uranian technology cured her, and she happily joined the team.

Back on the job

They investigated a number of Atlas companies:

The Agents learned that M-11 had been programmed as a double agent for the Yellow Claw. They used him to track their enemy back to the scene of the earlier massacre, where Jimmy had been found. Discovering a secret passage they battled through Claw’s minions to face the villain himself, along with his advisor the dragon Mr. Lao.

The Yellow Claw — more properly the Golden Claw, or Master Plan — revealed that like him Jimmy was a descendant of Genghis Khan . He’d been testing Jimmy as his enemy to ensure his worthiness of succeeding him as Khan, restoring his Eternal Empire to its former glory.

Jimmy accepted the Spirit Banner of Temujin. He declared himself the leader of the Eternal Empire and the Atlas Foundation, but professed his determination to use their resources for the betterment of the world. His time done, the Yellow Claw willingly stepped into the mouth of Mr. Lao to be devoured.

With Khanata’s help the team faked their death, leaving them temporarily free of S.H.I.E.L.D.’s interest. Jimmy and his Agents of Atlas — the inner circle of the empire — made plans to become a clandestine force for good in the world.

Cut off from the Atlas Foundation when the Skrulls’ invasion became overt, the Agents carried out strikes against them for information. When Venus was unwilling to use her powers to cause the Skrull soldiers to drown themselves, Jimmy accepted her decision — understanding her concerns — and ordered M-11 to execute the soldiers.

The Agents moved on. They carried out covert actions against the invaders all over the world, and contacted others to help their resistance activities.

When Osborn came to power the Agents stole gold from Fort Knox that he’d earmarked for illegal weapon system research. Using this by way of an introduction, Jimmy played up the role of head of a criminal empire to set up an arms deal with Osborn for Uranian technology. 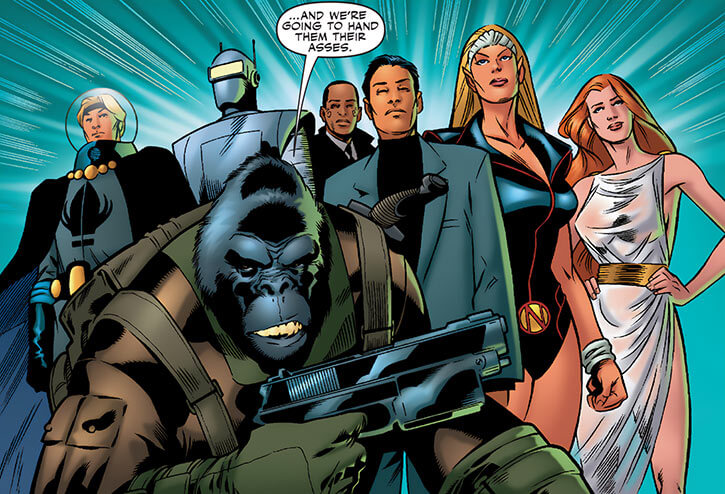 They tried to manipulate the New Avengers into destroying the fake weaponry, but ran into a problem when Spider-Man realised the truth. Fortunately M-11 recognised Wolverine as Logan, who’d left an explosive on him when they’d last met in 1958, and attacked. This reignited the fight, and the weaponry was destroyed as planned.

When Osborn realised they’d been playing him he set his black ops team, the Thunderbolts, to kill them. The Thunderbolts attacked an illegal Atlas chemical weapons research facility in remote Louisiana. While they’d been unaware of its existence, the Agents investigated and were ambushed.

While the fight was complicated by chemicals released by the facility’s destruction, the Agents managed to win. Jimmy had the Uranian (as Bob now called himself) implant a post-hypnotic suggestion in Scourge that he should shoot Osborn when next he saw him. It didn’t work as Osborn next appeared as a hologram, so only the Headsman was killed.

Unhappy with Jimmy’s progress, Mr. Lao appointed his second, an heir in case anything should happen to Jimmy. That was Temugin, the Mandarin’s son.

With S.H.I.E.L.D. disbanded, Jimmy recruited Derek Khanata as administrator for Atlas, and a member of the inner circle.

Learning that Suwin — his former lover, and Yellow Claw’s daughter — still lived, Jimmy sought her out. Mr. Lao told him she was head of the Great Wall, a faction of the Atlas Empire which had split off and controlled their ancestral homelands.

What Mr. Lao neglected to mention was that Jimmy’s entering her lands would break a peace accord that had been in place for decades.

Suwin — now called the Jade Claw — was less than happy to see Jimmy. She initiated the war, using the Dragon’s corridor to strike at Atlas facilities all around the world. Her own robot, M-21, proved more formidable than M-11 and briefly destroyed it.

Learning it was powered by a satellite array, they destroyed them as part of their assault on the Great Wall. They ultimately beat the enemy force.

Jimmy allowed Suwin to retain control of the Great Wall as part of the Atlas Empire, assigning Temugin to oversee her.

The Abduction of Venus

When Venus went missing, Atlas’ resources proved inadequate in locating her. Desperate and not wanting to waste time asking and risk refusal, the Agents infiltrated the X-Men’s mostly abandoned Greymalkin facility in San Francisco to borrow their Cerebro technology.

Not unsurprisingly the infiltration didn’t go as planned. But after the obligatory fight the X-Men allowed the Agents to use Cerebro. They learned she was being held in the Adirondacks by agents of Aphrodite.

The Goddess was unhappy with the usurpation of her name, especially by one made in her image. The Agents rescued Venus before Aphrodite did anything to her. 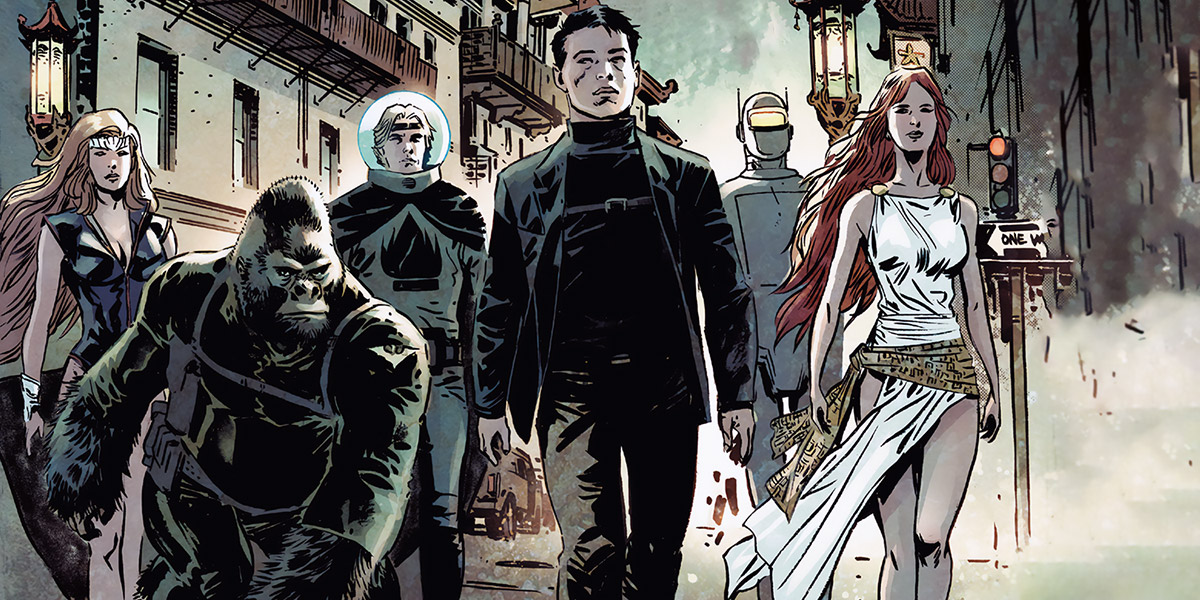 Aphrodite hadn’t finished with Venus, and informed her creator, Phorcys, where his errant puppet was. The monster appeared in the waters of San Francisco bay. He called Venus to him and had her use her abilities to lull sacrifices for him to feed. The Agents helped Venus break free of his control and see him off.

Hunting down Aphrodite, they found the Greek Pantheon — in control of the Olympus Group corporation — under attack by Hercules for their actions. The Agents infiltrated their headquarters and encountered the enraged Aphrodite. The Goddess easily took control of the Agents, and Venus engaged her with her powers.

Aphrodite countered with a similar attack, but was ultimately forced to accept she’d grown more to represent the petty and vain over the centuries rather than love. Deciding to she was no longer worthy, Aphrodite gave Venus her Cestus and her role as Goddess of Love.

After an attack on the brothers who’d originally been the 3D-Man, their successor Delroy Garret Jr. began having dreams of their having worked with a group back in the 1950’s. Coming under attack himself he learned the group he’d seen in his dreams still operated, and hunted them down.

When he confronted the Agents of Atlas they insisted the original 3D-Man had never been a member of their group, but decided to investigate.

They discover beings from another dimension capable of possessing bodies in their world, and had a fight when the Atlas troops of their own base were taken over. The battle was ended by Mr. Lao killing most of the controlled soldiers, but they managed to take a prisoner and force him to reveal what he knew.

The invaders were from an echo world, stuck between two other dimensions with slightly different Earth’s. The Agents made preparations to travel to the echo world, although attempted sabotage forced a few of them into their bodies on the other Earth for a short while.

There they learned that the group Jimmy had formed over there — which included the 3D-Man — had been called the Avengers, and eventually grew into the Avengers as it was known today. They also learned that dimension had been battling echo world invasions for ages, unaware that when they blocked one incursion the echo worlders turned to the other Earth.

Finally reaching the echo world, called Lurra by its inhabitants, they found themselves empowered by the nature of the place. They learned the world has always been filled with ghosts of people in the other worlds, appearing but unable to be affected by the natives.

Unable to escape them without retreating to remote areas, the natives developed the means to reach the other worlds and set to making war on them to get some peace.

Using Uranian technology and the resources of the Atlas Foundation — while shrugging off the attacks of the panicked locals — the Agents engineered a method of preventing the ghosts from appearing.

Returning to their home dimension, Jimmy invites 3D-Man to join the Agents and he accepted.

The JSA had disbanded when the President was kidnapped, and the government remained suspicious of its members. So when Jimmy was tasked with assembling a team he was ordered to recruit agents without links to former super-hero groups.

The suspicion spread to the G-men, causing political pressure among those who knew of their existence and forcing their eventual disbanding. 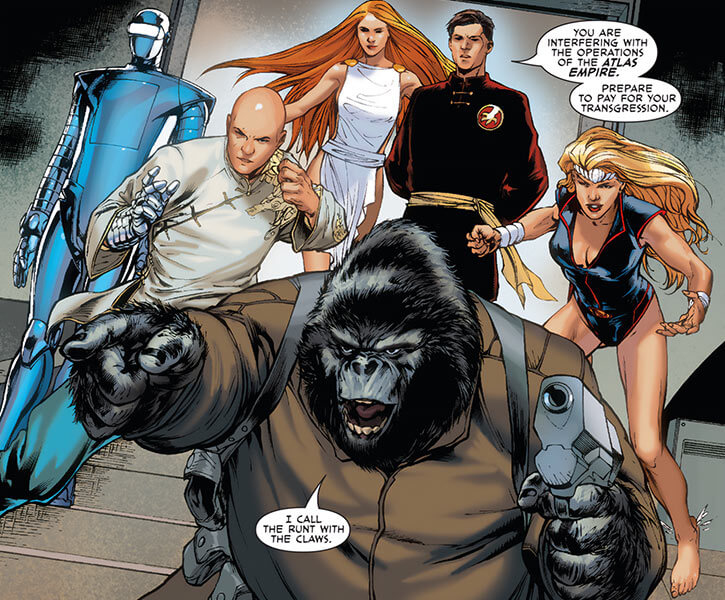 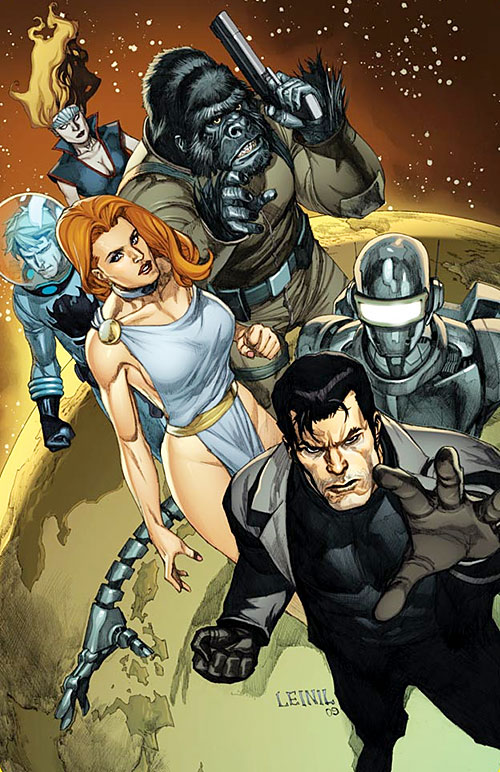 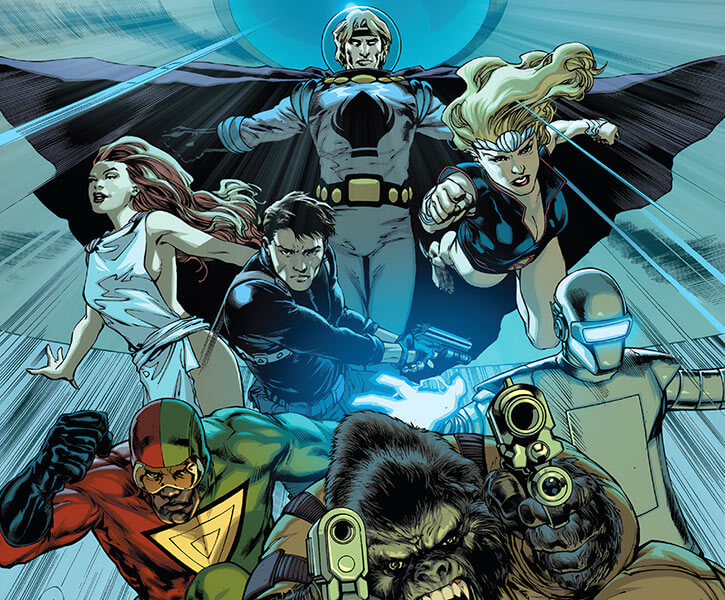 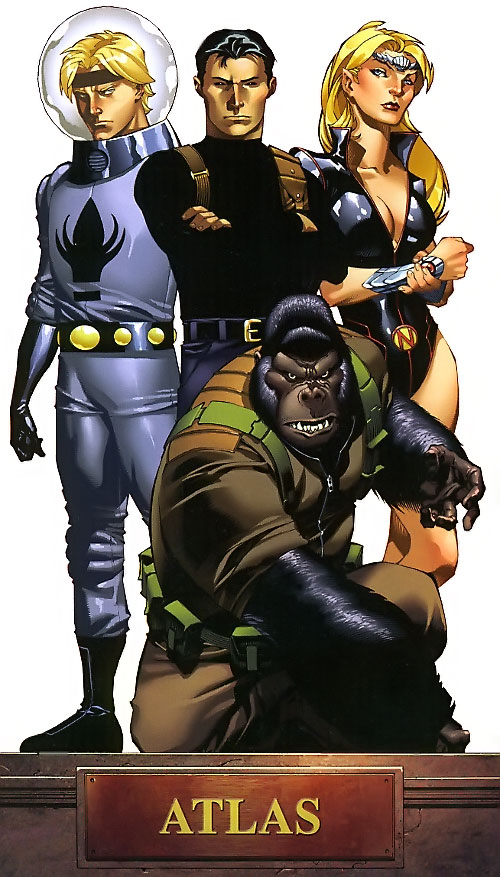 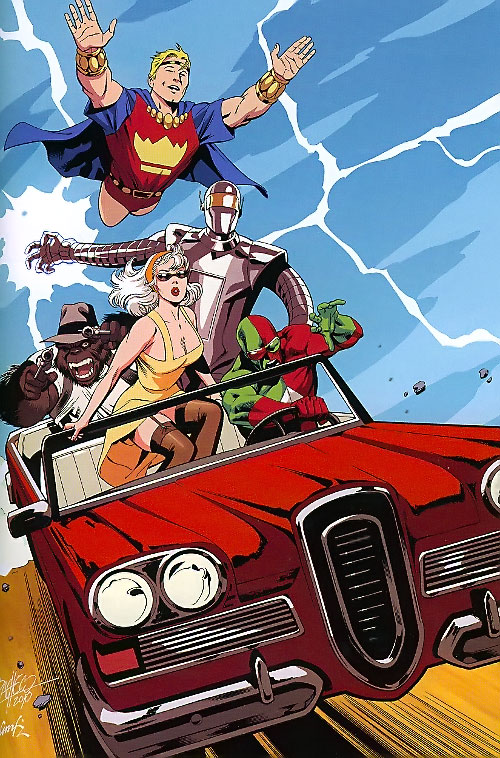