Agni can conjure up flaming spheres which he can hurl at targets.

Agni was recruited into the second iteration of the Jihad group. It is unrevealed whether his powers are innate, or the result of the metahuman experimentation performed by the Quraci government.

He was part of the group which attacked New YorkCity. Agni boarded a subway train and then proceeded to kill everyone he came across. When the Suicide Squad arrived he found himself facing Captain Cold, who froze Agni in a block of ice and left him for the police.

He led the Jihad unit which tried to break President Marlo of Qurac out of an American military prison. But they found themselves facing the Israeli Hayoth, the Suicide Squad, along with Batman, Superman, and Aquaman. Their failure wasn’t any real surprise.

He was among the Jihadi members who avoided the destruction of Qurac by Cheshire, and blamed America for the attack. On board a flight to America, they found they shared it with the (currently fugitive) Outsiders.

Their mystic members recognised each other’s nature. The situation inevitably escalated into a fight while in midair, which the Jihad ultimately lost. Agni presumably found himself in custody again.

A vicious thug who’s dedicated to the Jihad’s goal of punishing America for its crimes.

Agni is pretty much a follower, even when acting as field commander he’s still following orders.

“Damn that old woman to the hell her demon came from ! Her fear has doomed our mission ! Our fellow Quraci will go unavenged !”

Bonuses and Limitations:
Flame Project has no AV (-1).

He speaks an unidentified non-English language. Given he’s named after the Hindu god of fire, it seems likely he’s Indian, and so I’ve given him the Hindi language. But it’s unlikely to be the language he used when speaking to other members of Jihad, so he probably has another one. 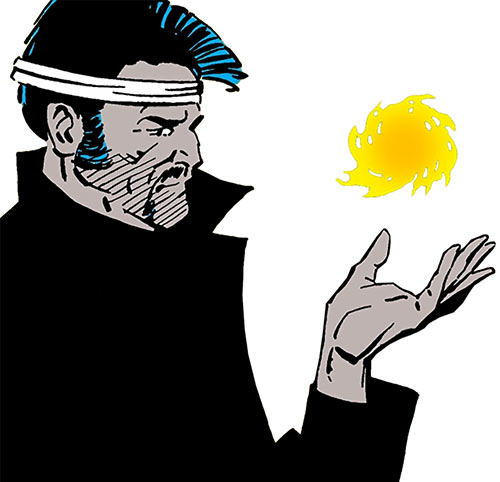 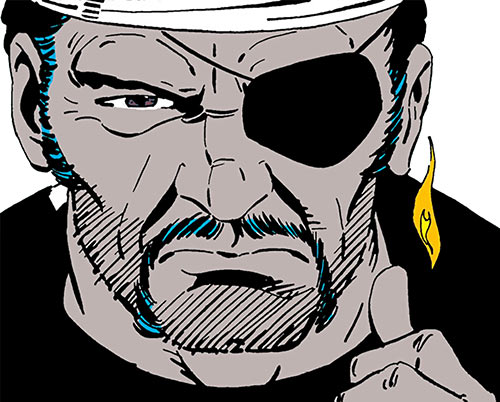