This specific character was part of a RPG campaign run by writeups.org contributor Kal El, set in Barcelona.

Akalandrazor is a huge dragon. He has elemental control over stone, acute senses, and an affinity with magical energies which allow him to protect himself against them or to smell them.

He can voluntarily step into a static dream for a century, during which time he doesn’t age nor need sustain of any kind. However, he will automatically fall into such a trance-like state if he is on an area covered with radio waves (like any modern city).

Akalandrazor has battled over the centuries with another dragon, Pyremus Heraklyon, over the control of the city of Barcelona. During the XVth century Pyremus into trapped on a magic painting, and Akalandrazor thought he had won for good. 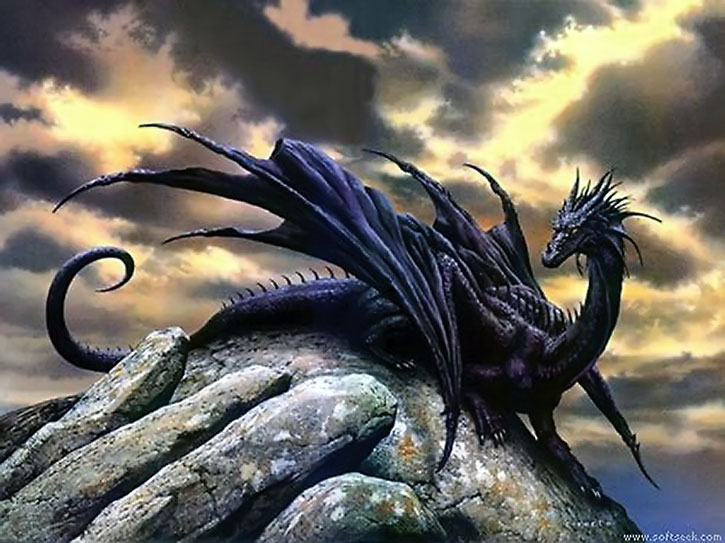 But the devil Maestro Mephisto lured him into a trap. That turned the dragon into the subject of the experiments of an alien race (the Z‘bps, established near the Pyrenees. He was sent to another planet. It wasn’t until the year 1924 that he managed to come back to the Earth… but too late.

Radio communications had arrived to the city. Akalandrazor thus fell asleep in a cavern under the city’s central square. The aliens tracked him there, to make sure that they would be able to use Akalandrazor again if he was needed. They installed a device in the cave that would block the radio signals from the outside if they so wished.

Akalandrazor’s cave was recently found by the Supernova heroing team. They relocated the dragon to another cave, near the comm tower of the city. They now use the dragon’s previous lair as their secret headquarters.

Rituals:
His scales are tattooed with three rituals. He hasn’t paid HPs to learn any of them, and casts them as if “from a scroll”.

At the moment the dragon will awake he has no Wealth as he has been stripped of all his treasure (Bankruptcy Subplot). Given his Motivation, this will soon change. At his best (VIIth century), Akalandrazor had the equivalent to Wealth: 15.

Although Akalandrazor can also attack with his tail, he never uses it in Grapples and it’s too big for any kind of detailed manipulation, so he doesn’t get Extra Limb and it’s included in his overall STR score.