For instance, seeing the map of the Akheva Ruins zone was something of a blast from the past. I did spend a fair bit of time there with Gitane, stalking centi in the first corridor and the fallen pillar room. These were soloable with enough care, and the zone line could almost always be reached in case of an add. Heh, that was Everquest.

ANYWAY. The Akheva are a very powerful species, who were among the greatest powers on the strange moon called Luclin.

Akheva are four-armed humanoids twice the size of a Barbarian. They were created to be divine agents. As a result, they possess great superhuman strength as well as very high intelligence and acumen.

Akheva used to be the top dog among the numerous strange species on the surface of the moon of Luclin. They remain extraordinarily powerful fighters – and quite a few are potent magicians as well. They have been called godlings, not without reason.

The Akheva are superhuman durable. Their eyes can see through any darkness – mundane or magical. They frequently fight with two great swords, each wielded in perfect coordination with one or two arms. Masters of their martial arts may fight with four greatswords, probably enchanted.

The height of an Akheva seems strongly correlated with their caste. Their physical, intellectual and magical power generally follows suit.

Their language, the Fleshless Tongue, is a thing of incomprehensible nuance and secrets. It cannot be fully spoken or understood by other races. Furthermore, the simple presence of information spoken or written in the Fleshless Tongue may gradually become sanity-destroying. It is likely, but not demonstrated, that telepathic contact with an Akheva would be very dangerous.

The great geomancer Grieg  was reputedly driven into madness when trying to read inscriptions in the Fleshless Tongue carved by Luclin herself.

Being perfect creatures, Akheva do not age or die. They can be killed through extraordinary force, but their shadow essence will simply reform as a shade. This process is called tekar, and the shade form xakra. The shade can enter a vacant Akheva body – these can be created by Luclin herself or by the Akheva, presumably using religious magical rituals.

If there are no vacant bodies — as has generally been the case since the civil war — the Akheva will continue operating as a shade. In this form they will wear a ritual cowled, four-sleeved robe. A xakra shade is every bit as powerful in this state as it was in life, but it can be destroyed. 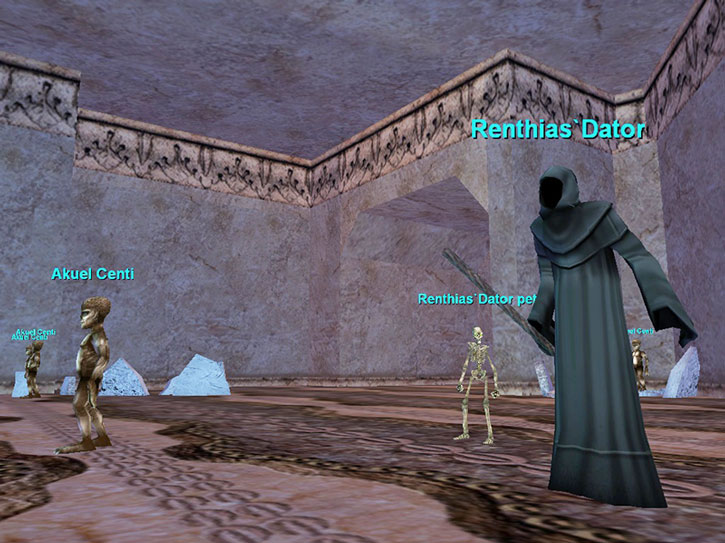 What happens to a destroyed shade is unknown. Vah Shir shaman have stated that tekar destroys the denizens of the spirit world, perhaps by draining spiritual energy.

The Akheva of the Maiden’s Eye retain servants . These are :

Furthermore, the Akheva of Vex Thal retain some gigantic rock elementals used as guardians and labour.

The Akheva race is a creation of the goddess Luclin – the Maiden of Shadows . Luclin did not want to join the other gods in creating sapient species on the world of Norrath. Instead, she claimed its barren moon and gave it her name.

The Maiden of Shadows then gradually, through willpower and divine magic, made life bloom on both the dark side and the light side of her moon. At least two species bore her highest favour – the Akheva on the surface, and the Thought Horrors  deep underneath.

The Akheva were Luclin’s surface’s administrators, priests and soldiers. They were a race of perfect immortals with great strength and intelligence, sharing Luclin’s values and worshipping her with their very soul. They organised and reigned over the surface of Luclin, dreaded by less powerful species.

Over time, intruders appeared on Luclin. Though not all such events are documented, one example was the arrival of the Shissar. Fleeing the wrath of the gods of Norrath who unleashed the killing fogs of the Green Mist, the Shissar desperately reached Luclin through teleportation magic.

Terrified that the Green Mist would find them there, they magically blasted the atmosphere out of a large area, which became the Grey .

Other, much later intruders included the remnants of the Combine Empire, or the Vah Shir teleported there by renegade Erudites.

Luclin was possessive and did not want her moon soiled by things she had not created. Thus, she had the Akheva fight these intruders, and perhaps various other, unknown aliens. In turn the Akheva enslaved various races, though they preferred to animate their own servants – such as powerful stone elementals.

The main servant race of the Akheva were a distinctive type of tegi , called the shadow tegi in honour of Luclin.

Say hi there to my bad body double

The general events of the fall of the Akheva are known, but their date is unclear. Though the Shissar are known to have been long beset from the underground by Luclin’s Thought Horrors, there is no clear sign of them having been attacked by the Akheva.

The Vah Shir knew of the Akheva early during their history on Luclin. But the fall presumably had already taken place. Thus, while the Akheva killed Vah Shirs who reached their lands, they never came after the intruders. 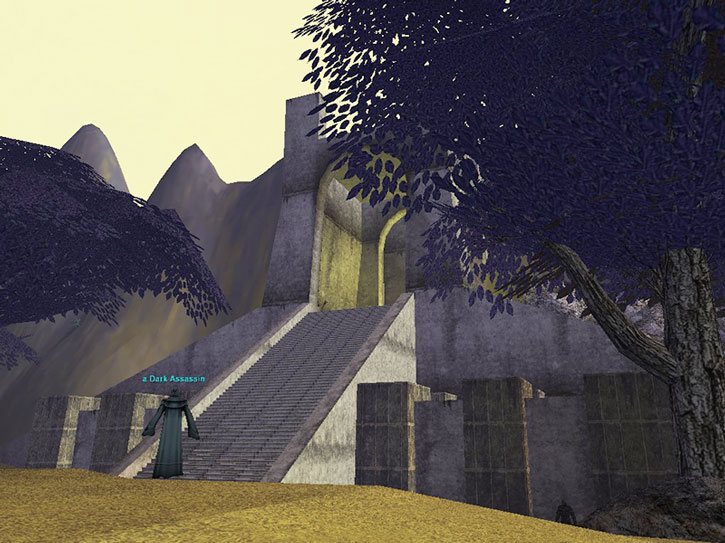 The fall of the Akheva happened after Luclin created her avatar. It was a sort of 12-metres tall Akheva called Akel Ha’ra. Unlike the androgynous Akheva, the avatar was as manifestly female as Luclin. Akel Ha’ra was the head priestess and ruler of the Akheva.

Wanting to honour her creator, she and the greatest Akheva wizards launched a complex project to create a shadow double of Akel Ha’ra. This endeavour apparently held great theological importance.

It is possible that Akel Ha’ra was meant to represent the bright side of the moon, and the shadow double the dark side.

They eventually succeeded, and Aten Ha’ra sprang to life. For a while they each ruled on separate aspects of Akheva life. But everything was rent asunder over a linguistics issue.

The Akheva had started speaking other tongues. Their own perfect language was the Fleshless Tongue, impossible for other species to articulate and with many concepts with no translation. However, some Akheva wanted to rule and direct other species in a more efficient fashion. Thus, they pragmatically talked to them in their mortal languages.

To Aten Ha’ra and her faithful, this was an abomination to be stopped at once. The Fleshless Tongue is apparently part of the Akheva’s very nature as well as being the language of the goddess Luclin. However Akel Ha’ra supported the practice, and the Akheva eventually sundered into a vicious civil war.

The immortal Akheva do not forget, seldom compromise and never forgive. The civil war broke everything it touched, and devastated their civilisation. The two sides were about balanced due to the similar authority of the avatar and her shadow double. No end was in sight.

Look at the blood we’re spilling, look at the world we’re killing

Aten Ha’ra eventually succeeded in conjuring a weapon of mass destruction. It was the titanic storm called the Maiden’s Scar.

The storm ravaged everything in the territory of her double. The stronghold of Ka Vethan was smashed to ruins, and even Akel Ha’ra was taken apart by the storm.

To this day the Maiden’s Scar continue hovering menacingly, high in Luclin’s atmosphere. Underneath the Scar is the area called the Maiden’s Eye, the remnants of the main Akheva land. The Maiden’s Eye is still blasted bare despite all the time that has passed since. 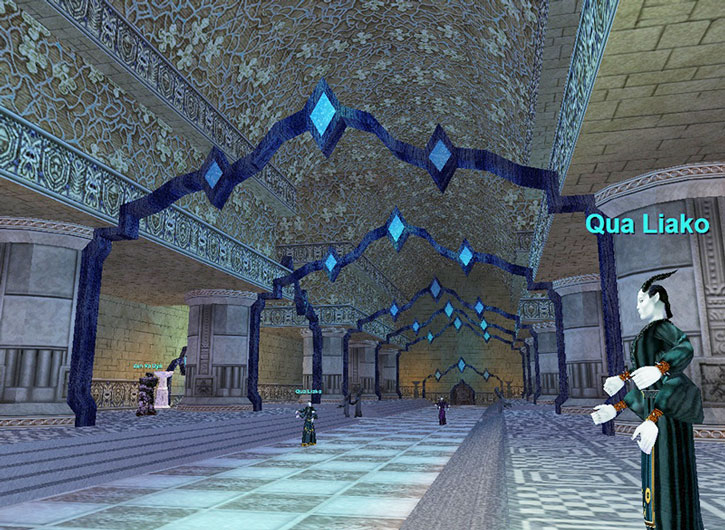 Even the Maiden’s Scar did not bring an end to the civil war – but there wasn’t much left to wage it with. The faithful of Akel Ha’ra remained around the ruins of the Ka Vethan citadel, in the Maiden’s Eye.

Aten Ha’ra, exhausted, retreated with her faithful in the last Akheva settlement standing, Vex Thal. They locked themselves in and essentially vanished from Luclin.

Ravaged but not quite broken

By this point, most Akheva were in xakra shade form. There weren’t resources left to create enough physical bodies.

The Akel Ha’ra supporters remained active in the Maiden’s Eye. Although unable to rebuild their power base — the rubble there is now merely known as “the Akheva ruins” to all but scholars — they have been up to something ever since.

However, many of the Akheva in the ruins, living or dead, seem trapped in the past. These behave as if the citadel was still there. A powerful Akheva xakra, the wizard Itraer Vius , has apparently been leading regular ceremonies for centuries to maintain a tiny remnant of Akel Ha’ra’s spirit.

Some Akheva roam the terrible Umbral Plains, outside of Vex Thal. Furthermore, mad xakra shades can be found in many areas of Luclin if one is unlucky enough.

As to the the purists in Vex Thal, they are also thought to be very, very slowly rebuilding their power to purge Luclin of foreigners.

The Akheva are four-armed pale, horned giants with beautiful androgynous (but mostly male-ish) features. They usually dress in elaborate robes and jewelry.

Akheva in shade form live among the rest, without distinction. At least until they start losing their sanity and wander away to degenerate into hateful roaming undead monsters.

Akheva tend to be evil, cold, arrogant and sophisticated. All other species are clearly beneath them. Even giving these orders was considered an unforgivable sin by half the population. 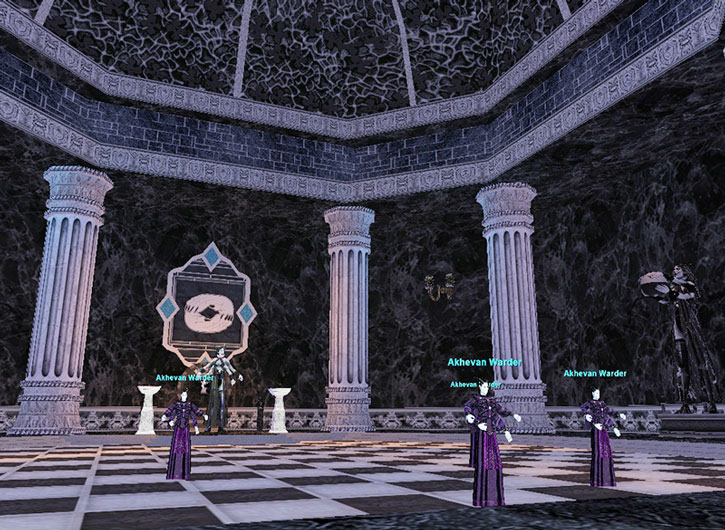 Inhumanly determined, the Akheva are still fighting their ancient civil war as a matter of principle. They keep scraping together whatever ashes from the past they can as part of their very long-term plans to win the war.

Luclin is a jealous sub-goddess of shadows, mental torment and secrets, with a brutal streak – and the apple did not fall far from the tree. However, the few living Akheva left in the ruins in the Maiden’s Eye can speak other languages than the Fleshless Tongue, and may be willing to communicate if that seems likely to help their cause.

Note:
Many Akheva know spells, and this likelihood increases with caste. Higher castes may also have 1-3 or even 4 APs of Growth.

Drawbacks:
Serious Rage, Socially Inept (toward other species only).

The game stats’ point of reference is early in the Shadows of Luclin era, thus making the Akheva powerful creatures. We assume they are roughly on the same level as Amygdalans, as Vex Thal and related zones were part of the endgame of that era.

Source of Character: Everquest I.

Helper(s): Lore of Norrath  for archiving a long-since gone SOE article. This article also uses data from the Sword & Sorcery tabletop Everquest RPG – this data is well-aligned with the in-game data. Art by Udon Studio for Sword & Sorcery Studios ; screen captures by Allakhazam.com . 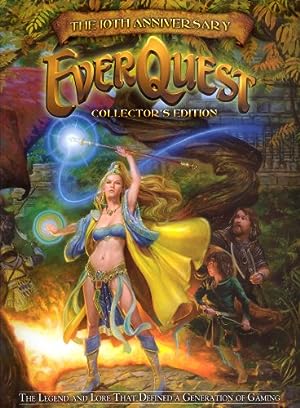 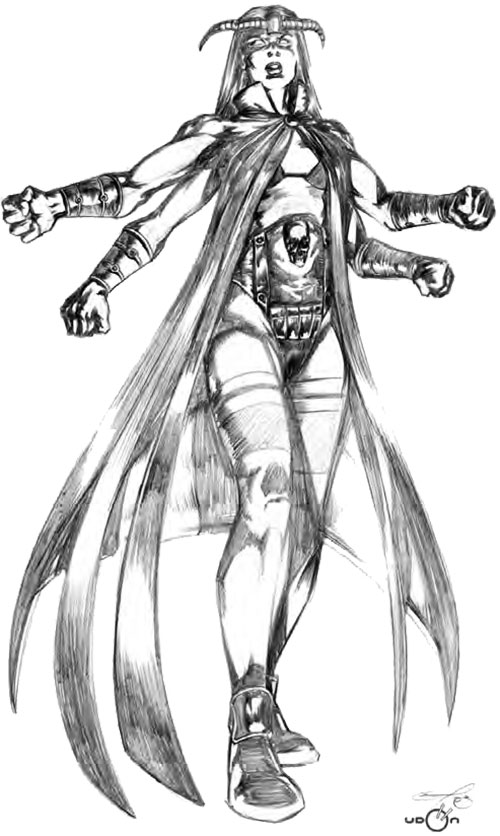 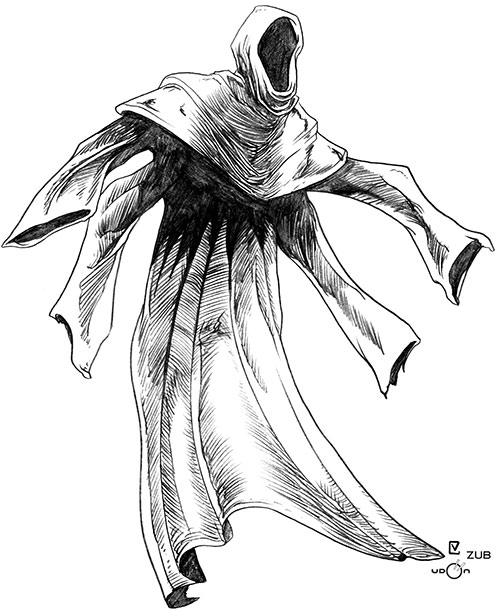