Albert is the scion of an immortal man and a djinn. He was born with several mystical gifts, one of which being an extended lifespan. Albert has lived for centuries, during most of which he retained the physical vigor of a young man.

In addition to his longevity, Albert was born with the gift of healing. Using his gift, Albert can repair any physical injury, save death, in mere moments. Lacerations, breaks, and internal injuries melt away into nothing at the mere touch of his hand.

In addition, Albert can use his gift to eradicate disease in his patient’s body. Only the most virulent diseases are immune to his touch.

Albert can also pervert his gift and use it to kill. With but a glance, he can cause death in a victim by inducing a heart attack, a stroke or any other means he can think of.

Finally, Albert is a practitioner of the mystic arts. Though he is not as adept as some of his other siblings, his magic is still quite potent. Among his mystical repertoire, is a ritual that allows him to instantaneously transport people across vast distances.

Though the exact limit of the spell is unknown, he is capable of transporting an individual a distance of at least 2000 miles.

Next to Jasmine (and Adam), Albert is the oldest living Destine. His childhood was unremarkable, and at a very young age he discovered that he didn’t have the same stomach for adventure that the rest of his family seemed to share.

Albert traveled the world, often in the company of his father or his siblings. He used his gift to heal wherever it was needed. In the years surrounding the “Black Death” that swept through Europe (1348-1350), Albert stretched his gifts to the limits in an attempt to stem the virulent disease and spare the lives of its victims.

After the Great Death

This act caused Albert great suffering. It took many years for him to recover. It was during this period of recovery that Albert discovered that he could pervert his gift of healing and use it as a weapon. 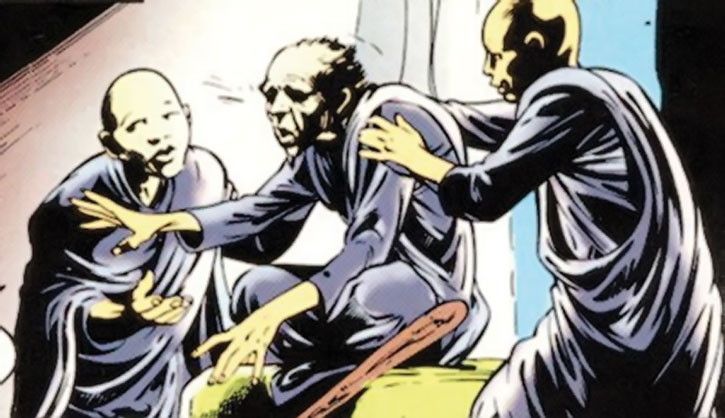 It happened in the winter of 1374. Albert was being escorted to a Shalu Monastery in Shigatse, Tibet by Adam and his brother Thaddeus. Thaddeus and Albert were especially close, which was unusual considering the vast differences in their personalities. Thaddeus was fierce where Albert was meek, Thaddeus lived for battle while Albert was a pacifist.

As the Destine trio made their way up a snowy mountain pass, they were attacked by an undead army of Geong Si controlled by the renegade Inhuman Tral. Though Adam and Thaddeus put up a valiant battle, they were overwhelmed by the sea of zombies.

As a result, Thaddeus was knocked over a cliff and fell to his death. In a moment of guilt induced fury, the normally pacifistic Albert lashed out with his corrupted gift and used it as a weapon to kill Tral.

It is unknown whether this event was what caused Albert to become a monk in the Seventh Moon temple in Nepal. But when Lenz’s mutates began to murder his siblings, Albert had been at the temple for many many years.

Through a prophetic vision, Albert watched as the mutates murdered his brother Maurice. Thus, he was not surprised when Cuckoo telepathically contacted him for help.

Albert initially refused her. But Cuckoo, being Cuckoo, ignored his refusal and telepathically yanked his spirit out of his body and to her side. Despite his anger at Cuckoo’s latest affront, Albert still healed her mortally wounded host. But not before warning her that this would be the very last time he would do so, vowing that when she lost this host, she would die.

When his mother, Elalyth, was suffering in Yden Albert mystically transported a confused Adam from the United Kingdom to Nepal.

After informing Adam of Elalyth’s agony and coercing him to return to her side, Albert used his mystic power to once again transport Adam from Nepal to the entrance of Yden in Iran. Adam’s presence eventually soothed Elalyth’s suffering. With his mother’s agony ended, Albert presumably returned to the simple life of a monk in Nepal.

Albert appears to be an ancient man. His stance is deeply stooped, forcing him to lean upon a long walking staff for support when he stands or walks. His face is covered in deep wrinkles, small tufts of white hair cover his head and a neatly trimmed beard adorns his chin.

Under normal circumstances, Albert dresses as a Monk of the Seventh Moon. His cloths consist of a long thick robe that covers his entire body with a simple belt that sits around his waist. A pair of open toed sandals cover his feet.

Albert is a quiet, wise and surprisingly forceful man. In his youth, he was driven to use his gift to heal the ills of the world, traveling far and wide in order to help all who needed it. After his murder of Tral though, it seems that Albert’s guilt in taking a life (human or not) has forced him to seek absolution.

Albert uses his gift sparingly in current times, and had to be coerced by Cuckoo to heal her. Her constant cheating of death and lack of concern for the true owners of the bodies she acquired over time seems to have soured the relationship that the two siblings once had.

Albert Destine
Cuckoo: “Albert… ALBERT… It’s me … Cuckoo.”
Albert: “I know. I am not senile !”
Cuckoo: “I need your help.”
Albert: “Of course. Why else would you be here.”
Cuckoo: “An unknown adversary has been murdering our kin…”
Albert: “Yes, and you have been forced to seek a new host body —- one that is mortally wounded — so you need me to heal it.”
Cuckoo: “Yes.”
Albert: “I won’t do it.”
Cuckoo: “You owe me Albert.”
Albert: “I will not bow to emotional blackmail.”

“Goodbye sister. My debt to you is paid in full. When next death touches you… you will die.”

“Forgive me disturbing your slumber Lobsang. I am old and my magic has grown clumsy… but extreme circumstances necessitated that I bring someone here in haste.”

“My gift is to heal… the mystic arts are a skill I’ve learned and I’ve never been as adept as Nathaniel, Gracie or Kay… Nor am I as healthy.”

“I can see that something violates your very soul…”

“I killed once… with hate in my heart — the evil taints me still.”

The clan is such a minor group within the Marvel Universe, they could be inserted wholesale into the DC Universe with very little modifications to their backstory. Lenz could have been created by Intergang or Professor Ivo or even been one of Luthor’s experiments.

Of greater affect though, any of the great DC heroes that were wounded, injured and in need of recovery could have approached the mysterious monk in Nepal that can heal any and all injuries. Barbara Gordon, Arsenal, and even Batman may eventually find themselves in need of a long trip.

Rituals:
Farseeing
Effect: Detect(Siblings): 07; Remote Sensing: 07; Range Bonus.
Casting time: 04 APs.
Components: Requires caster to achieve a state of meditation.
With this spell, Albert can see, feel and hear what his siblings are experiencing around the world.

Teleportation
Effect: Teleportation: 07; Flash: 04
Casting time: 03 APs.
Components: Requires Hand Signs.
Albert’s Teleportation spell is all flash and bang, and uses a bolt of lightning to transport his passengers from location to location. This ritual has a range bonus of +15APs. 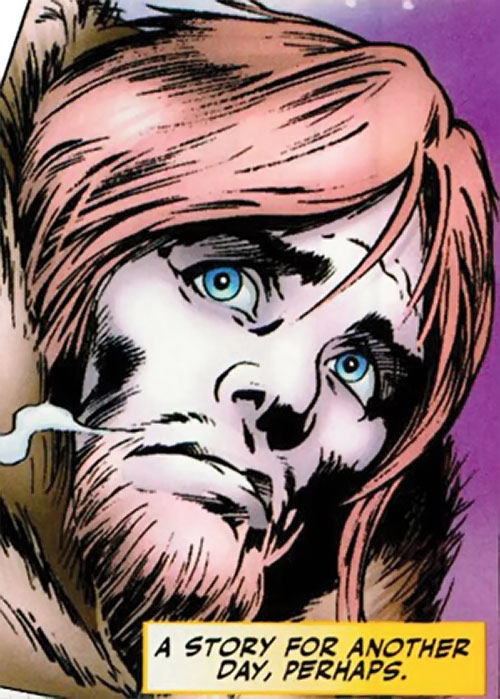 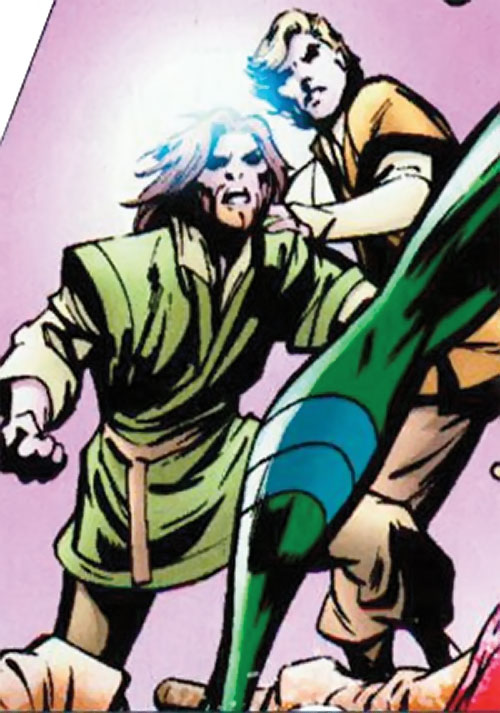