With powers granted by “The Goddess”, Alchemiss has demonstrated a varied ability to wield what appears to be magical energy.

Most important in early battles because she is the only member of Freedom Force who can close dimensional gates, she can also:

She is also quite attractive and knows it, though she usually relies on her appearance more than her personality.

There is some debate about the actual nature of Alchemiss’s occult abilities.

According to one school of thought, all of her powers are actually normal super-powers, and not mystical in any way. They are manifestations of Energy-X, and not magical. “The Goddess” is little more than a construct in her mind. A fiction through which she can focus the abilities she has received.

The other school of thought, and the one used in this write-up, is that the Energy-X did not actually grant her powers. Rather; these used the latent belief in The Goddess that Emily’s worship implanted in the statue, enabling said entity to reach through.

Finding Alchemiss, she deemed her worthy. Thus, she granted her a certain amount of occult knowledge and the ability to manipulate mystical energies via incantation and gesture. In this, Energy-X was merely a facilitator, and not the actual source of her powers.

Catherine Larchmont-Price was a spoiled Southern girl. She believed in nothing but her ability to make men drool.

Her college roommate, Emily, was an early practitioner of Modern Wicca, at the time numbering barely more than a handful of people worldwide. Catherine scoffed at Emily’s beliefs in “The Goddess”, suggesting that if she spent less time with such “nonsense”, she might be more popular.

One night, a strange purple glow appeared in the window, and saturated Emily’s statue of The Goddess. Emily was away at the time, and Catherine heard a voice in her head calling to her. Entering a dreamscape, she had a vision of The Goddess telling her that she was her Chosen One for the Earth plane, and she found she now possessed mystical abilities!

Dressing up in a… costume, of sorts, she took to calling herself “Alchemiss”. She encountered members of Freedom Force when holes in time and space started summoning large raptors (probably deinonychii) and even a T-Rex to Patriot City.

She managed to shut down the gates that were sumoning them, and ended up joining the group as their first official recruit.

Alchemiss is a sexy young lass who apparently shops at The Fetish Shop for Sorceresses.

Her costume includes a pink lace-up bustier with sleeves and a mini-skirt attached, thigh-high leather boots. Leather gloves that reach her bid-upper arms, and a dark blue cape with the alchemical symbol for Earth on the back (a capital “A” with an extended central bar) attached to a leather collar that covers most of her neck.

Her identity is “concealed” with a domino mask whose sides extend as points twice as wide as her face. Her bright red hair (parted to one side) flows free.

The only teammates she doesn’t seem to insult are Minuteman, Mentor, Man-Bot, and Liberty Lad. She still calls them names, but there’s no acid in her voice when she does so. In fact, she seems slightly fond of Liberty Lad in a little brother kind of way, and has a SERIOUS thing for Man-Bot.

Rituals:
The following rituals are often used by Alchemiss: 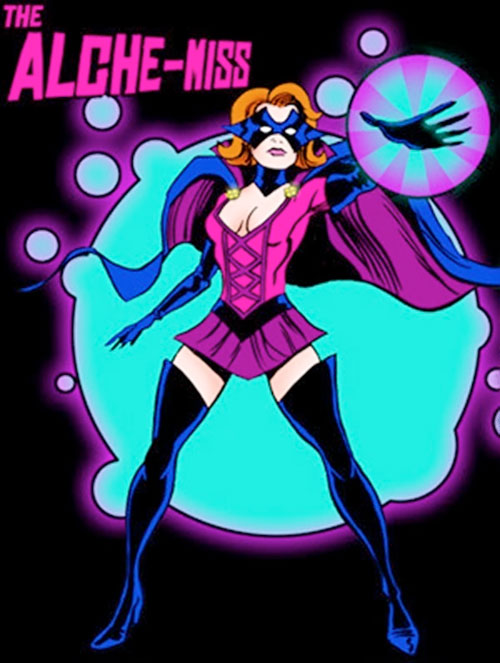 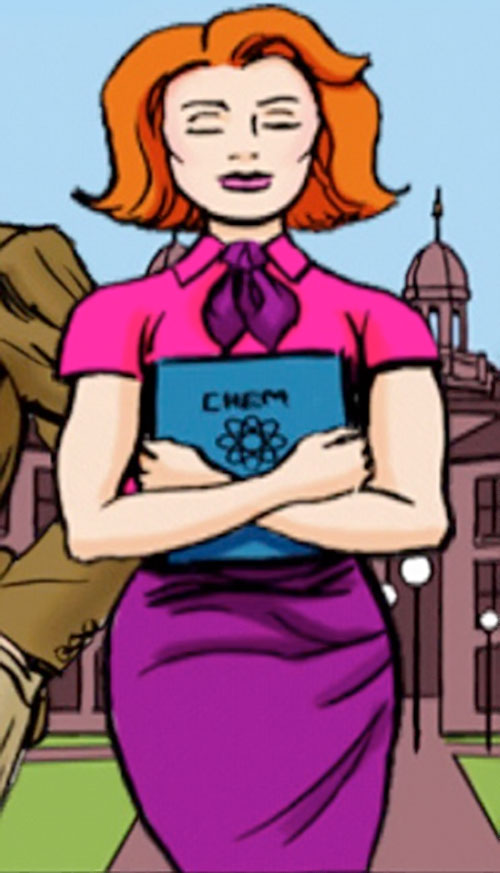