Aleta’s body is composed of solid light particles, which allows her to:

Furthermore, all Arcturans are long-lived (with an average lifespan of 1820 Earth years).

(See the Guardians of the Galaxy (31st century) entry for a complete history of the team, and Starhawk‘s profile for important material that is not repeated here.)

Aleta Ogord was born on Arcturus. She was raised there with her adoptive brother Stakar. Both siblings preferred meek intellectual pursuits, to the scorn of their aggressive society.

When the pair explored the ruins of the Forbidden City, they discovered the giant statue of the Hawk God. When Aleta threw a nearby ancient brainwave helmet away in a rage, it activated and converted her body into energy. The energy merged with the statue and brought it to life.

The statue, which Aleta couldn’t control, was soon attacked by Reavers, to no avail. When Stakar used the helmet to join his consciousness with Aleta’s, the pair were empowered and transformed. They merged into a dual entity, so only one of them could exist at a time, while the other was in a limbo.

When they refused to help Ogord in the Reavers’ conquests, he vowed revenge as they left the planet.

Since Stakar had control of the change, Aleta spent most of her time in Limbo. There she grew more passive, and eventually fell in love with Stakar. The Hawk God allowed the two to separate for a time, during which they had three children – Tara, Sita and John.

The pair were soon remerged, however. When the children were old enough, Starhawk would leave them on their secure asteroid home, as he joined the Guardians of the Galaxy.

Following their routing of the Badoon from Earth, the Guardians set out on a journey into space. They eventually met Aleta, and discovered the truth about her and Starhawk.

Seeking revenge on the pair Aleta’s father kidnapped his grandchildren. He then had them turned into psychic vampires. The children critically weakened their father, but expended too much energy doing so and died of accelerated old age. Starhawk was at that point too weak to save them. Aleta blamed Stakar for their deaths, beginning the breakdown of their relationship.

During the Guardians’ battle with the Stark, a blast of energy forced Aleta and Stakar apart, earlier than Stakar had expected. Finally free of him, and searching for something in her life, Aleta began a relationship with Vance Astro.

Their relationship progressed to the point where Vance proposed to her while they travelled to the Universalite Homeworld. Their plans were derailed when Stakar forcibly reabsorbed her. Their premature separation had resulted in his becoming increasingly translucent and weaker, unable to survive alone.

The remerging process didn’t go as he planed, as Aleta fought his control. They eventually reach a kind of understanding. Aleta was able to view events through his eyes, even as Starhawk himself adopted a darker look.

Starhawk returned to confront the Guardians on Earth, where they were fighting Rancor’s mutants. Briefly coming under Mindscan’s sway, Starhawk battled the Guardians. But Aleta spoke through him, convincing the Guardians to let him work with them.

The team then journeyed to the past to stop the Badoon before they ever invaded Earth. Aleta’s relationship with Stakar got out of control, and they were separated from the team. Taking shelter on an asteroid, they battled for control, with Aleta gaining supremacy.

She travelled forward in time, returning Stakar’s essence to his infant form and continuing the cycle of his existence. Aleta then rejoined the team as the new Starhawk.

When Aleta led them to confront the threat of the Beyonder, they encountered the returned Stakar. Aleta instantly attacked. The battle continued until the Hawk God intervened, angered at their continuing conflict. The God merged their bodies at the hand, forcing them to work together.

After the pair took a quick trip to the past to fix the results of their last trip, they returned to find the Guardians missing. Searching for them, they entered the scar of Eternity, and found themselves in a trial held by cosmic beings. Eternity, the Living Tribunal, the Hawk God, and the Celestial, Scathan the Approver, were judging the actions of the Beyonder and Protégé.

Angered at their embarrassing him in front of his peers, the Hawk God removed their powers, holding them in stasis. The Guardians soon appeared, having been battling Mephisto and Malevolence in the Beyonder’s realm.

Feeling merciful, the Hawk God separated them again, offering to allow one to remain as Starhawk. Aleta declined, and was allowed to keep her earlier powers. After making her peace with Starhawk, she returned to the Guardians, and resumed her relationship with Vance.

Strong-willed and confident, Aleta comes from a warrior society. She can be fierce, but she isn’t as experienced at using her powers in combat as Starhawk. Thus, he often took the lead in battles.

During the period when she was Starhawk, she was colder, distant and more aloof. Aleta no longer related to her friends as she had done previously, especially Vance, whom she was standoffish with.

While she and Stakar did grow to love one another during the beginning of their time as Starhawk, the death of their children turned Aleta away from Stakar. Yet, he never lost his feeling for her. Their bodies being merged exacerbated things, especially since he had primary control over when they changed.

This gradually developed into a resentment of him for her captivity. She gradually became colder and more hostile towards him. When he forcibly remerged her, the hostility became more open, with only a roughly enforced truce allowing them to work together.

Their final parting was on more amicable terms. Aleta seemed to have come to terms with Stakar not being to blame for their childrens’ deaths.

“By the ringed nebula !”

“Heaven help me, we may have to kill him to stop him !”

“By the stars ! I never expected the Protector of the Universe to be so bloodthirsty ! There must have been a better way to end this !”

“Halt where you are, woman ! Or face the power of the light !”

“Surrender, Badoon ! Not even the Uni-Power can match that of the Hawk-God !”

“Address me as Starhawk – keeper of the power of the Hawk-God ! I am the one who knows !”

“Begone ! No creature born of the shadows can withstand the pure unbridled fury of my living light ! Behold the power of the Hawk God, Asgardian prince of mischief !”

“There is only room in this universe for one Starhawk, Stakar – and I am she !”

Stakar and Aleta are the reincarnations of Prince Khufu and Shiera, their relationship was poisoned by the heavy influence of the Hawk God.

Arcturus was a Thanagarian colony, where they dumped unwanted undersiders, the mutants who were of no further use even as slaves. A violently expansionist faction, the Reavers used it as a base when their actions saw them expelled from Thanagar.

The statue of the Hawk God actually preceded the Thanagarian settling of the planet, and they took its resemblance to their similar statues to imply that the planet had previously belonged to them.

Connections:
Guardians of the Galaxy (High).

At various points she has shared an Alter Ego Drawback with Stakar.

When she possessed the full powers of Starhawk she also had Awareness at 10 APs, Invisibility at 08 APs, Power Reserve (Minor Marginal; STR, BOD) at 16 APs, and Time Travel (Serious Marginal) at 34 APs.

Slowed Aging is based on Arcturian physiology, and may not be relevant given her body was recreated from solid light. Its likely she may not age at any rate, but since she has stated it was centuries since her original body was destroyed, Slowed Aging is the minimum she should have. 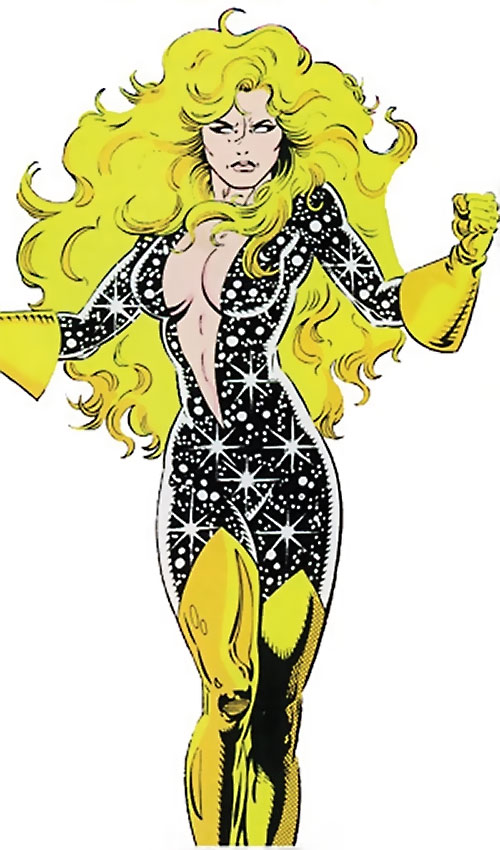 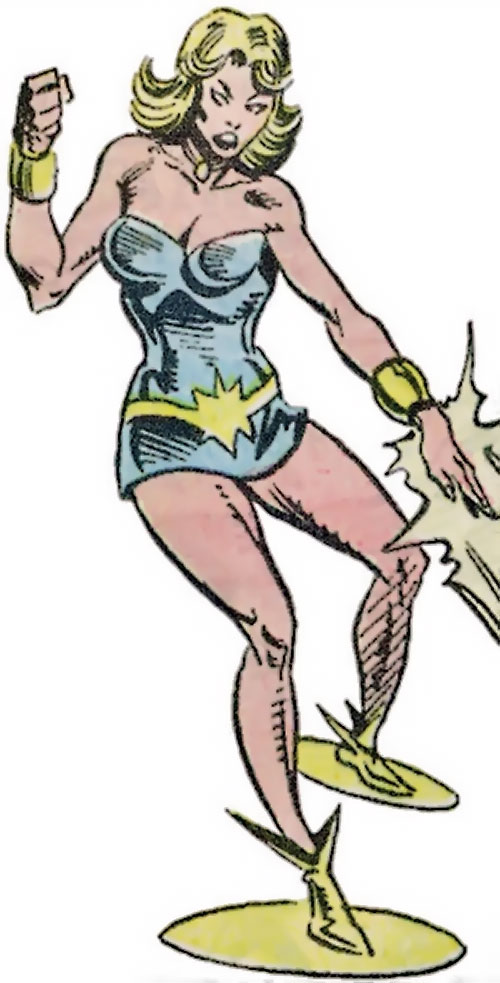 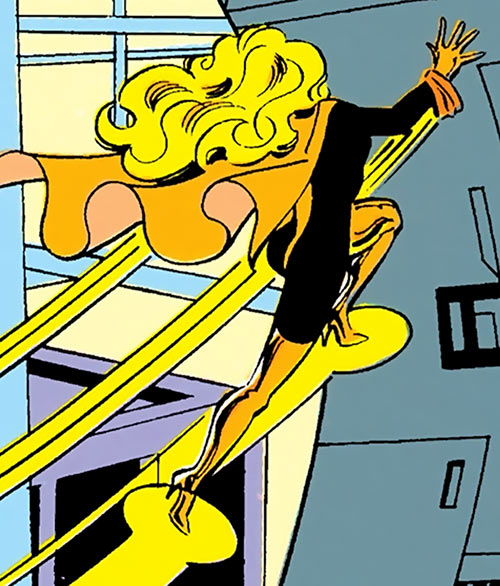 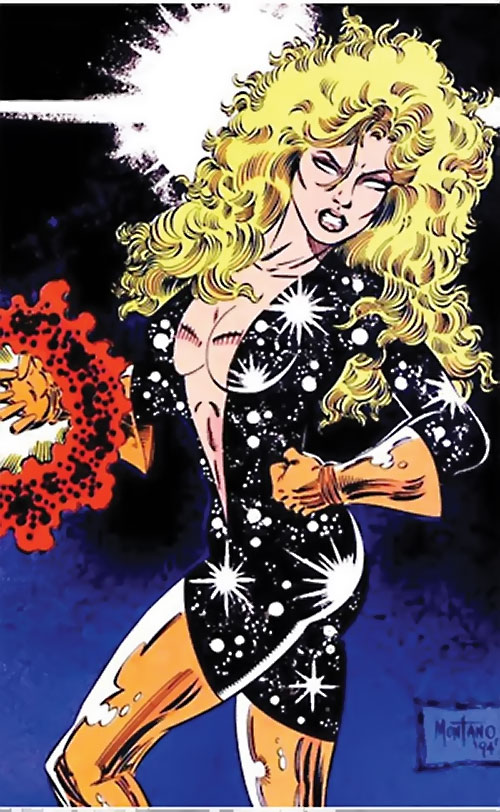