Alexander Luthor is the greatest engineer of the anti-matter Earth.

In addition to the powerful devices that aid him in his battles, Luthor has undergone considerable physical enhancement by means of genetic engineering.

He also has sophisticated personal shields against telepathy. It is unknown whether these shields are related to his genetic enhancements or are some sort of cybernetic implant.

The Crime Syndicate of Amerika is the JLA of an Earth in an antimatter universe where good is evil and evil is good. Benedict Arnold was the first U.S. President, Washington was a traitor, Britain fought for its independence against an Amerikan colonial power, etc.

It is a reversed DCU. In the DCU, by large, things are pretty upbeat. People are generally happy, secure and open to the wild and the novel by virtue of living in a world where good always triumphs in the end, thanks to colorful superheroes.

In contrast, the dreary inhabitants of the antimatter world live on a planet dominated by lies, greed and hypocrisy. And if that world sounds all-too familiar, then you’re just too cynical by half… Here vice and corruption are a way of life, and the bad guys always win.

Here crime is the founding principal of society. Evil is rewarded, cruelty is lauded. People live everywhere in fear of their masters all the way through the local mobs and the corrupt police, the bent journalists and up, through City Hall and the governments, to the top of the pyramid – the seedy Crime Syndicate of Amerika and its vicious bullying leader, Ultraman.

The CSA rules their Earth with an iron fist from their lunar headquarters, the Panopticon (“The place of wide vision” or “watchtower”). Their motto is Cui Bono: Who Benefits. The only known hero of the anti-matter Earth is Alexander Luthor.

Most of Luthor’s history is unrevealed. It is clear that he has had numerous conflicts with the CSA and Ultraman in particular, which have invariably left Luthor in captivity. It seems that Luthor has been allowed to survive only because Ultraman likes the challenge of hunting Luthor down when the hero makes one of his inevitable escapes from custody.

During one such break-out Luthor jumped dimensions. He landed on the normal-matter Earth of the mainstream DCU (which he dubbed Earth 2). He imprisoned his counterpart Lex Luthor and assumed his identity. Luthor then sought out information about superhumans who might help him fight the CSA. Meanwhile, he diverted considerable Lexcorp funds to charitable causes and employee benefits.

Luthor had inadvertently brought a passenger plane with him when he’d jumped dimensions, switching it with its matter Earth counterpart. Everyone aboard the plane was killed in the transition.

The JLA intercepted the plane as it was going down and noticed several unusual characteristics about the passengers. For instance the passengers’ hearts were on the wrong side of their bodies and their dollar bills had Benedict Arnold’s face on them rather than George Washington’s.

The JLA eventually contacted Luthor while investigating the plane’s origins. Alexander took the opportunity to introduce himself and explain his desperate need for help. The JLA agreed and traveled back to the anti-matter universe with Luthor. They imprisoned the CSA in their own lunar fortress, the Panopticon. Then they began working to restore order and justice on the anti-matter Earth.

The battles of the CSA and the JLA ended when they both realized that they had been duped by Ultraman’s slave Brainiac. Brainiac had secretly facilitated Luthor’s escape and his trip to the matter universe. Even the switched passenger planes that initially drew the attention of the JLA and CSA were the result of Brainiac’s manipulations.

He’s a brainiac, and he’s dancing like he’s never danced before

In the resulting confusion, Brainiac was able to subvert the systems of the Flying Fortress. He then began the process of merging the matter and anti-matter Earths. The end result would be the mutual annihilation of both worlds and Brainiac’s transformation to a being of pure energy.

Instead, the JLA realized the only way to win was to do something evil. Using the Flying Fortress’s cyclotron, they abandoned the anti-matter Earth. As the JLA left, the CSA was returned to their home reality as well. Ultraman stopped Brainiac in short order and the CSA began undoing the JLA’s damage to their organized crime syndicates.

Luthor is currently free and continues to plague Ultraman. Soon after the CSA had restored order over their Earth, Luthor had already robbed the Ultraman Bank in Centropolis to gather funds for his next plan.

Luthor is driven to fight the good fight, pitting him against the greatest supervillains of the anti-matter Earth.

Though he is a benevolent soul, he is also an aristocrat. His arrogant streak that shows clearly in most of his interactions with others. Because of his perpetual defeats, Luthor is prone to frustrated outbursts and can be momentarily overcome by despair when things start going sideways on him.

Alexander Luthor’s competition with Ultraman has the same personal dynamic as the Luthor/Superman conflict. Luthor opposes Ultraman not just because Ultraman is an obstacle to Luthor’s goals, but also because he’s a rival alpha-male.

Luthor even has the compulsion to rub Ultraman’s nose in his victories (however temporary they may be), as shown by his holographic call to Ultraman when the CSA was trapped in the Panopticon.

Farm Girl (running up to Luthor’s crashed ship): “Is he human ?”
Luthor: “How very charming. I’ve just reversed across the matter/anti-matter membrane in a homemade ship and this is my reception ? My dear country cousin, you are human… I am Luthor. Now… where can I find the super-people around here ?”

“I feel a brainwave or two coming in, and I intend to surf.”

“On my world, there’s me ! Heroism is a dirty word. I risked everything to reach this universe. Don’t send me back to that hell with just platitudes ! Have you no idea what it is to be alone against a world of shadows ?”

“I told you there was a better world, Ultraman. I found it and now I’m bringing it here to rub in your face.”

Connections:
JLA (Low, though it’s very difficult to contact them).

Physical Attributes are speculative, based on mentions of Luthor’s super-strength and the Martian Manhunter’s observation of Luthor’s extensive genetic modifications.

Uncertainty (representing the inevitable failure of Luthor’s plans in the anti-matter universe) is treated as a character trait rather than a Genre rule. Its effects are very direct and noticeable in Luthor’s case (as opposed to the much subtler effects this universal rule had on the JLA and the CSA). 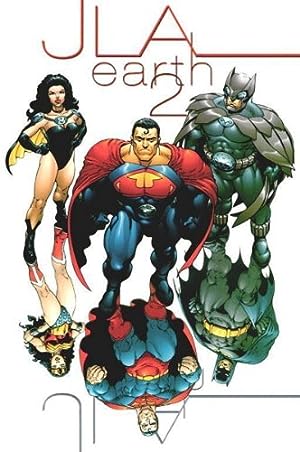 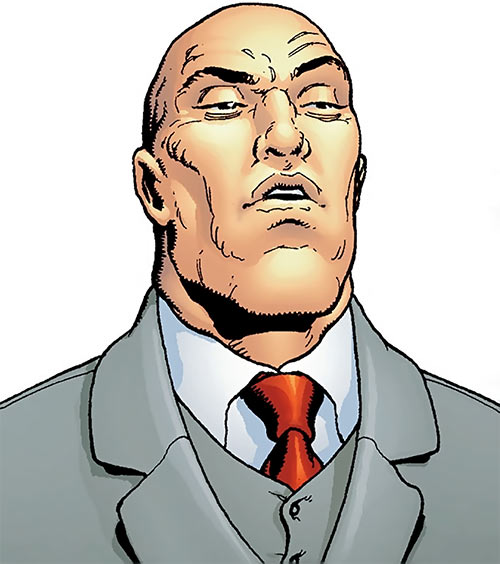