Ali Ka-Zoom was a truly gifted kid. In particular, he had a world-class gift for prestidigitation.

He later became an occultist , learning an unspecified répertoire of Rituals. However, this considerably damaged his sanity due to the Price of Magic .

Later still he became a ghost, though he did not pass on.

He’s an erudite in matters mystical. Furthermore, being dead gives him access to some sources of knowledge most living persons cannot touch.

Within a relatively short time frame he was seen in San Francisco, Los Angeles and even Manhattan. This implies rapid astral  travel.

As an apparent agent of the Seven Unknown Men of Slaughter Swamp, Ali seemingly had foreknowledge of everything that was going to happen during the new Harrowing.

For much of the known early history of Ali Ka-Zoom, see our Newsboy Army entry.

Since Ali mentioned it took him three months to build his cabinet, the likely chronology is :

The ghost and the cursed cabinet

The cabinet was impounded as evidence in the disappearance and suspected murder of Ace. However, a dozen cops and a metanormal investigator were lost trying to investigate it. Presumably, these men were attempting to recover Ace or his body.

Years later the Cabinet, still wrapped in police tape, was released from police custody. It was bought by Cassandra Craft for $20K. It stayed in her workshop for a while.

The Ghost of Ali Ka-Zoom lingered on. That was in part because the cabinet served as a tether to the material plane. It was presumably after his death that Ali had some sort of contact with the Seven Unknown Men of Slaughter Swamp. He thus became an ally or agent of theirs.

Ali knew of the coming Harrowing and of the Spell of the Seven. He even knew what he needed to do to help the Spell of Seven run right. Presumably, his main goal was revenge and closure for the Newsboy Army. For Ali knew that the Spell of Seven would lead to the defeat and destruction of the Time Tailor.

During the early XXIst Century, Ali sensed that the Harrowing was coming. That also meant that he would soon be able to pass on and stop haunting Earth. Thus, the “Merlin of the ghetto” started working as a facilitator for the Spell to be correctly triggered.

If I walk down this hallway, tonight, it’s too quiet

In San Francisco, he deliberately left his top hat in the shop of Cassandra Craft after inquiring about Zatanna. Zatanna arrived shortly after Ali’s cryptic visit. 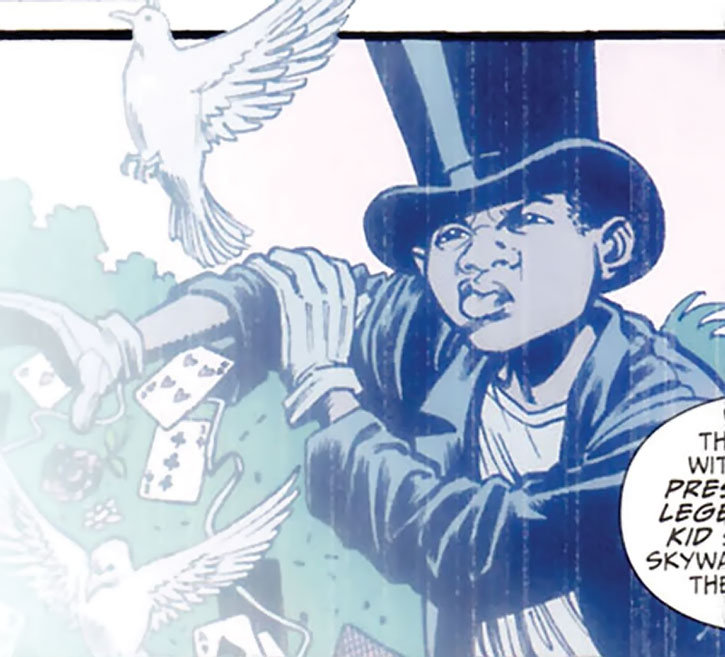 The lady magician was being chased by an entity calling itself Gwydion, who could be anything. Since she had temporarily lost her powers, Zatana wanted to use the items at the shop to fight Gwydion. Ali’s top hat proved handy to gather the smoke form of Gwydion when he was made more material. Thus, the entity was locked into the Cabinet and defeated.

In Los Angeles, Ali appeared to the time-lost Justina, who defended the insane bum against street punks.

Justina’s choice to protect the homeless Ali (whom she did not realise was a ghost) proved instrumental to her destiny. It broke the hold a Sheeda mind-destroyer had on her. It further allowed Ali to magically teach her English and transmogrify  her armour. Ali named her a Shining Knight before he left.

So I pad through the dark, and call you on the phone

Ali Ka-Zoom then contacted Zatanna and her apprentice Misty Kilgore, who were carrying his Cabinet. He asked them to burn it on the beach (perhaps in order to release the souls of Cap and the other people who had been trapped inside it).

Ali then asked Zatanna to drive the three of them to the sprawling home of don Vincenzo, a mob lord of the West Coast — and formerly Kid Scarface. The place had just been raided by a Sheeda party, with the don’s soldatos all having been killed.

Ali, leading Zatanna and Misty, checked some boxes in the overall plan :

On a more personal level, Ali acted as a psychopomp  and escorted Scarface’s soul to the afterworld. It is also hinted that the Merlin of the Ghetto ensured that Ed Stargard, formerly Baby Brain, intuitively realised that the Time Tailor had been destroyed. This brought Stargard vengeance and peace after decades of torment.

Push your old numbers and let your house ring, til I wake your ghost

When the Harrowing itself started, Ali appeared in Manhattan to continue advising Zatanna. He gave her critical clues about the key to completing the Spell of Seven. After Zatanna launched the spell, Ali appeared at the side of young Ystina a second time, lifting her spirits and helping her collect herself.

Though Ali originally saw the Harrowing as his opportunity to pass on, he emerged from these events with a clear mind. The destruction of the Time Tailor apparent allowed him to shed his senility and insanity.

From his relationship with young Ystina, the Shining Knight, it seems likely that he will become the Merlin figure in the destiny of Ystina to become the Once And Future Queen of another iteration of Camelot.

Ali looks quite material, even though he’s not. He’s not translucent or anything.

Cassandra Craft, who is blind but mystically sensitive, described him as being tall. But to most people he appears to be a short and hunched over old vagrant.

Ali is no longer mad, but he is dead and old. Thus, he tends to ramble, and jabber cryptically about his childhood memories with the Newsboy Army.

After he served as a psychopomp to Kid Scarface, he seemed to be more lucid. He now came across as being wise and knowledgeable, though still subject to the Magician’s Code as he spoke enigmatically.

He later acted toward Ystinia like a protective, wise, friendly uncle. Ali did not seem bitter, insane or senile while chatting with her. In fact he seemed much like what he would have been had he never been cursed. He shed the clothes the evil Time Tailor had made for the Newsboy Army and is now free to make his own destiny.

As the Shining Knight’s mentor and advisor, the Merlin of the Ghetto can probably played as just Merlin to a young Arthur.

(1940s, all the Newsboys from Nowhere Street pledge in front of the UN) “And nothing will ever divide us.”

(1940s) “We declare a United Nation of Kids, dedicated to fairness, justice and the freedom to have fun !”

(To a ferryman driving a spiritual city bus for the just dead) “I ain’t altogether ready yet, son. Matter of fact, I still have one more stop to make. So drive on, driver.”

“Justin. An age of darkness needs a shining knight.”

(About the Cabinet) “There’s nothing in that box but a big deep hole, where we dropped a poor, foolish boy once and you know why ? Because he did something the rest of us decided was wrong.”

“Memories. Memories is power to me. Did you sincerely think it was a coincidence we all ran into one another here, today ? Sometimes it’s like mystery string holding everything together.”

“We’re here to attend the end of empires and childhood dreams, ladies. I appreciate you wearing black.”

“You know when they said Ali Ka-Zoom was dead, Zatanna ? It’s true.”

(Kissing the brow of the dead Don) “Vincenzo, Vincenzo. See ? I came back. I bring final unction. Ultimate sanction. Hey, little soldier. Didn’t I say I’d even hold your hand when it came right down to it ?”

“This is a ghost story, Zatanna. Ghosts will understand.”

“Don’t be hard on yourself. You’re surfing the Spell of Seven, Zee. They didn’t used to call me the Merlin of the Ghetto for nothing. Take this little guy, and make your daddy proud one more time.”

(To Ystina, after she entered school) “Sweetheart, why the sad eyes ?”

Drawbacks:
Age (Old), Guilt (probably lost after he escorted Kid Scarface into the Realm of the Just Dead), Magician’s Code. He had a CPI, but by the time he interacted with the Soldiers it was a MPI and it disappeared with the capture of Zor.

Rituals:
Ali could make Justina (and probably Vanguard) suddenly speak and understand modern English, transmogrify her armour into something just as protective but much lighter and skintight and also make modern clothing appear around her. It is likely he prepared or even wrote these Rituals well in advance.

Ali’s role in the story is to be the facilitator for the Spell of Seven. Therefore, he takes few direct actions. Game stats are thus very speculative. 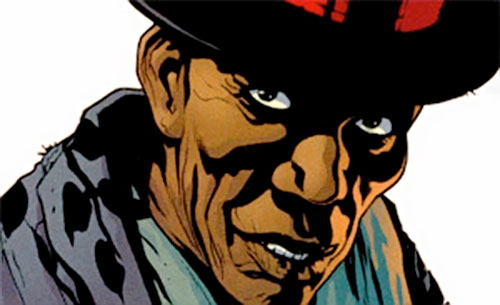 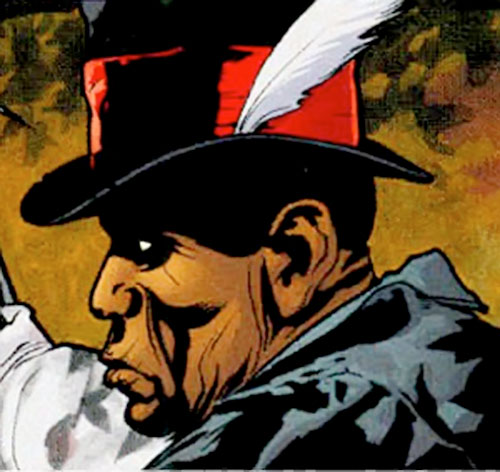