Facehuggers are quick, agile, and can leap short distances. They are immensely strong for their size — it can take 2 or 3 able-bodied adult humans to outmuscle a grappling facehugger.

Once a facehugger has secured a host, it puts the host to sleep. It can filter poisonous gases out of the atmosphere to keep the host alive or kill the host if an outside party attempts removal. Like all of the aliens, it has a powerfully acidic internal fluid.

Most facehuggers can only implant a single embryo, but there are some depictions (possibly apocryphal) of a queen facehugger that can implant a queen Embryo and at least one other embryo.

Trailer for the original Alien movie in 720p.

This history assumes that the reader has some familiarity with the movies and possibly even the comics in which the aliens have appeared in. It discusses their behavior during this first stage of their life cycle.

Facehuggers are usually first encountered inside eggs. An alien queen often lays the eggs in large groups of neatly spaced rows. Some reports, possibly apocryphal, indicate that alien drones can also create eggs by capturing subjects and injecting them with enzymes that change the subject into a single egg (Alien deleted scene).

The eggs remain dormant until a host enters the area. If a potential host is wandering freely through the egg field, a single egg will open. When the host is nearby the facehugger will leap out, grappling the host’s head. If alien drones have restrained the host in resin, the facehugger will crawl out of the egg and onto the host.

Once latched onto a host, the facehugger tranquilizes the host and even maintains its life functions. The facehugger then implants an alien embryo.

Once the embryo is implanted (which takes approximately one day — 15 APs), the facehugger sloughs off of the host, goes into hiding and expires shortly thereafter. The facehugger presumably hides to keep others from recognizing that implantation has taken place.

The host will wake up shortly afterward with no memory of the events leading up to implantation. Such memory loss is typical of traumatic unconsciousness in general, not something specific to implantation, so it may go unremarked by physicians.

The embryo grows into a Chestburster over the course of the next two to four hours (11-12 APs) – one day (15 APs) for a queen embryo. It then exits the host violently (hence the name Chestburster). This process invariably kills the host due to massive internal damage.

Certain embryos produce a queen instead of a standard alien drone. This might trigger during a normal implantation if the facehugger does not sense any other aliens nearby. Queen embryos might also be implanted by a specialized queen facehugger, though the existence of such a specialized facehugger is unconfirmed.

Queen embryos apparently make some alterations to the host’s body. This was demonstrated by the speed with which Ripley’s wounds healed after she was implanted with an embryo and subsequently injured.

Suggested game statistic changes for those implanted with a queen embryo include +1 AP to BODY and Regeneration Linked to BODY. Implantees carrying a queen will have a slight fever and an increased appetite due to their slightly quickened metabolism.

The above changes may have also facilitated the Auriga’s science staffs experiments, in which clones of Ripley and an alien queen were grown from blood samples found on Fiorina-161. These clones had some of the original Ripley’s memories, suggesting a possible mix of human RNA and an alien capacity for “genetic memory.”

The eggs are 3-foot tall, 2-foot wide ovals with a mottled, lumpen, leathery surface. The tops of the eggs open like a 4-petaled flower to disgorge the facehugger. 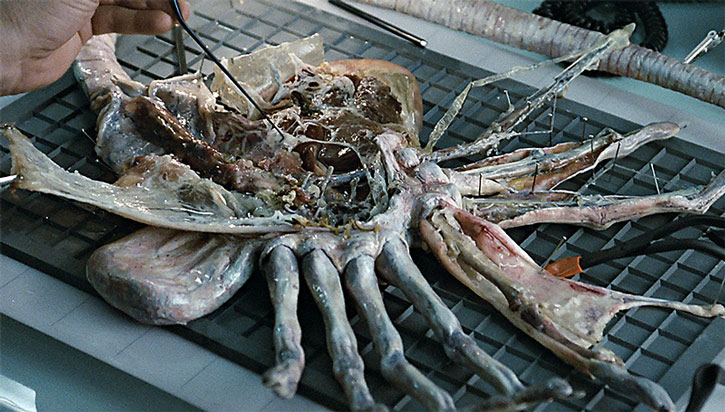 The facehugger has been described as an insectile crab or an elderly person’s hand with too many fingers. It is the size of a miniature-breed dog, not counting its 3-foot tail. Behind the bilateral array of “fingers” is a pair of pulsing respiratory sacs and then a long, segmented, prehensile tail.

The creatures are usually beige in color, with dead facehuggers taking on a grayish hue.

Queen facehuggers have a slightly more rigid exoskeleton and webbing between their “fingers” up to the first “knuckle”.

Wait for suitable host to approach egg. Latch onto host and implant embryo.

The aliens have had crossovers with several comic book universes, including Wildstorm and the DCU. Batman, Superman, the New Gods, and various Green Lanterns have all encountered the creatures on numerous occasions.

Note:
The facehuggers may be blind — they have no apparent eyes, but might have some other organs that serve a similar purpose — but their other senses more than compensate for this shortcoming. If they are blind, they might have sensory Powers such as Sonar or Thermal Vision at 02 APs.

Equipment:
EGG [BODY 06, Detect (Hosts): 02, Suspension: 32, Attack Vulnerability (Flame, -1CS to RV)]
The eggs can protect and sustain facehuggers contained within for a very long time, possibly several centuries. The eggs have primitive sensory systems that can detect suitable hosts (basically, any living thing with a body weight of at least 50 pounds) and awaken the facehugger. The particular mix of nutrients in the eggs does make them somewhat flammable.
The eggs are often encountered within large spaces, which are filled to capacity with rows of eggs as they were laid by a queen. They may be found singly or in small clusters as well, particularly if created by a drone instead of being laid by a queen (see Alien Drone write-up).

Whether the aliens are considered animals for purposes of Mental Powers such as Control is up to the GM, but there should be some additional difficulty regardless due to the aliens’ extremely unusual physiology.

Shrinking should be a 4 based on the Shrinking size chart, but anything over a 2 would affect them more than their smaller size actually did in the movies.

If a potential host has been captured and restrained by aliens, the facehugger simply crawls out of its egg, clambers over to the host, and then grapples the host’s head. If the host is mobile, the facehugger will wait until the host has come within a few feet (0 APs) of the egg and then jumps out, attempting to catch the host by Surprise.

The host gets a Perception Check to avoid the Surprise Attack as usual, with an OV/RV of 04/04 (equal to the facehugger’s Stealth Subskill).

The facehugger’s attacks are standard Grappling Attacks inflicting Bashing Damage. Once the host has been knocked out (reduced to 0 APs of Current BODY Condition), the facehugger has fully Grappled the target’s head.

Given the facehugger’s stats, most normal people will be knocked out with the first attack, especially if caught by Surprise; low-level heroic characters will probably be able to resist the facehugger’s attacks for some time and even fend it off with help.

Once the host is fully Grappled, the facehugger then uses Poison Touch to keep the host asleep and implant an embryo as described above in Bonuses and Limitations for Poison Touch. 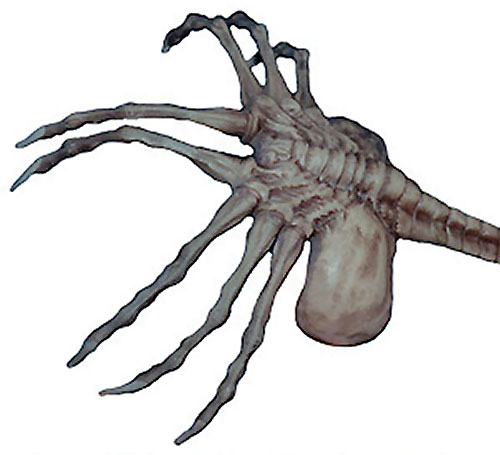 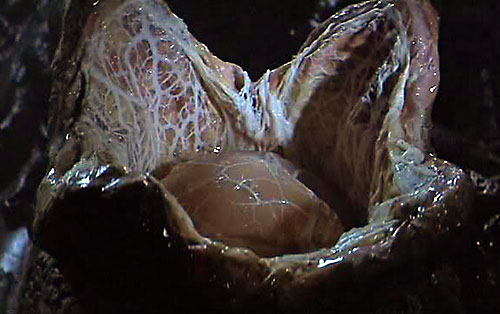 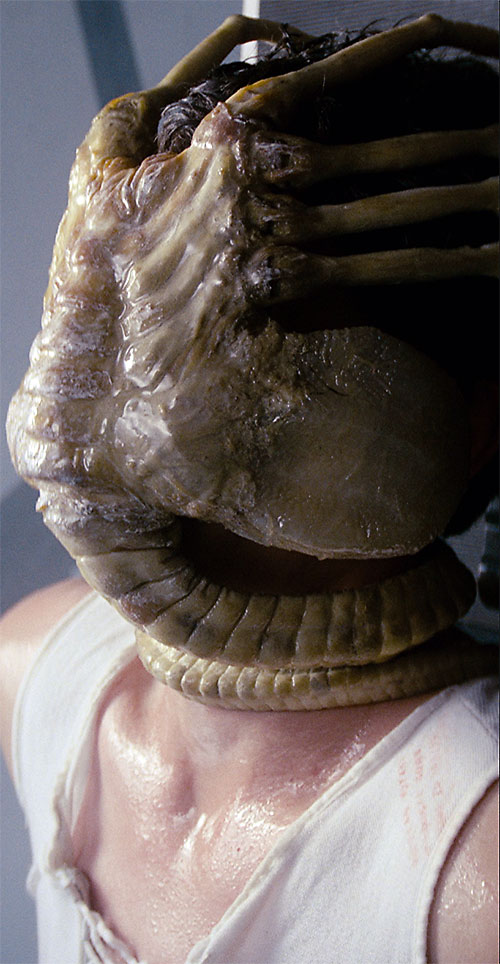 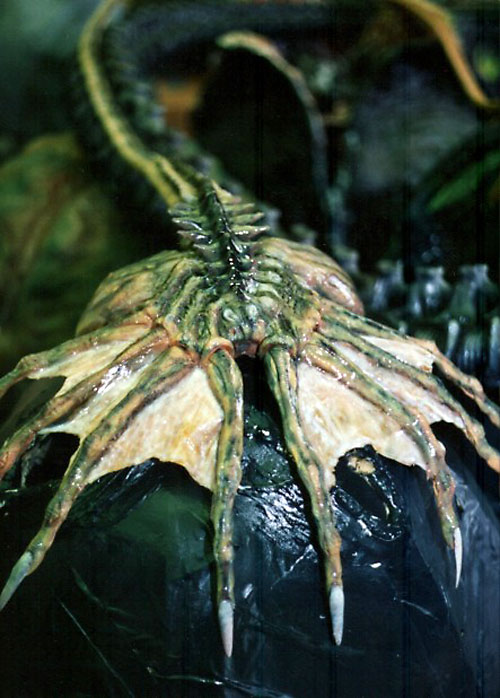