Altar Boy is a natural at the martial arts, athletics, acrobatics, deductive reasoning and other skills. This allows him to be Astro City’s equivalent of Robin (Richard Grayson).

He’s still a teen and lacks body mass. But with the training given by the Confessor he proved a superior acrobatic fighter — with great agility and reflexes — and rooftop runner.

He’s also a promising detective in the Holmesian tradition.

Though the surplice  of his costume might look awkward, the hem is actually weighted to stay out of the way. Furthermore, there’s a low-friction coating to prevent opponents from grabbing it.

Altar Boy also carries a few useful supplies under the surplice, though the only thing that was demonstrated were potent smelling salts.

Altar Boy has access to the Confessor’s hidden HQ hidden within the sprawling Grandenetti Cathedral – an equivalent of the Batcave.

Brian is the son of Thomas Kinney, a MD in the rural Hood County. His mother died when he was very young. Dr. Kinney routinely helped even those who couldn’t pay. He and his son lived in poverty so the locals wouldn’t have to go without medical care for financial reasons. Dr. Kinney died in 1988 while Brian was still a tween, and the boy ended up at the state orphanage.

Due to his altruism, Dr. Kinney was widely considered a sucker to be taken advantage of. Those whom he healed laughed behind his back. Attacks against his father got Brian in several brawls at the orphanage. The kid decided that unlike his father he would grow up into somebody respected, perhaps even feared.

Being fascinated by super-heroes, he planned to leave for Astro City and find some way to become a hero there. In the meanwhile he spent five years exercising and going to Hood County’s only dojo as much as he could. Though he wanted to finish high school before leaving, he cracked and hopped on the bus to Astro City in 1996. At this point he looked about 16.

Alone on the platform, the wind and the rain

Though Brian was initially disoriented by the big city. But he did find Bruiser’s, a beer joint catering to the blue collar super-hero crowd.

He was in luck – the owner was looking for a waiter. Furthermore, said owner was “K.O.” Carson, an ex-boxer. Carson had also been the heroic Black Badge who defended the Bakerville ghetto before the Civil Rights legislation.

Having a nigh-supernatural eye for youths with great potential, Carson recommended Kinney for a job at Butler’s, an upscale private club for superhumans. 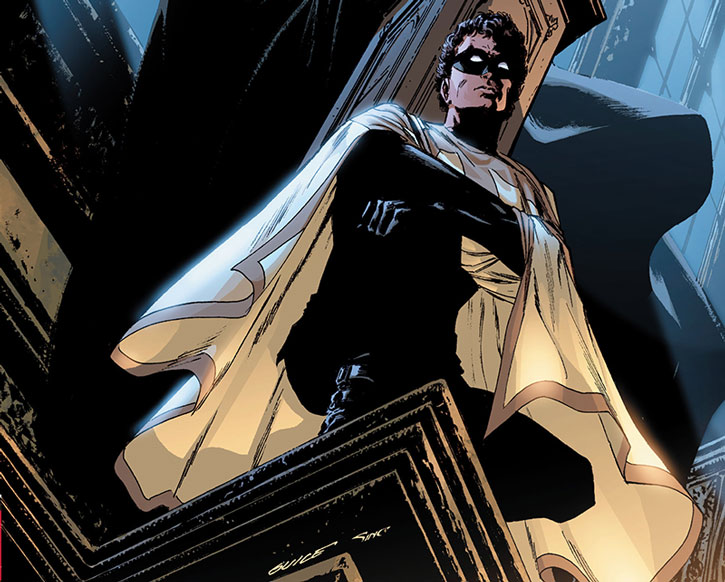 Brian was hired as a busboy on the strength of Carson’s recommendation. Three days later, the inept costumed criminal Glue Gun attacked the club in a revenge attempt, grabbing Brian as a hostage. Brian turned the tables on Glue Gun and took him down with a spin kick to the face.

Though the other busboys wanted to trash their colleague as they felt that he had stolen their own shot at the limelight, Brian was approached by the Confessor (Jeremiah Parrish).

The mysterious, nocturnal Confessor made Brian his sidekick as “Altar Boy”. Though the non-churchgoing Brian thought that the Altar Boy code name and costume were a bit daft, he eagerly studied under the Confessor and accompanied him during half his nightly patrols.

The Confessor arranged for a room and classes at the Robinson prep school for Brian, who during the day was thus a typical Astro City student.

Pushed around and kicked around

As Altar Boy grew into a capable sidekick, things went bad in Astro City. The Mayoral office had secretly been taken over by aliens. Furthermore, an elusive Thing Man Was Not Meant To Know  had been murdering random persons in northern Astro City.

Furthermore the summer was oppressively hot. Lastly, he restless public was manipulated into turning against its heroes after the mysterious monster murdered a pretty White girl rather than a vagrant of colour. 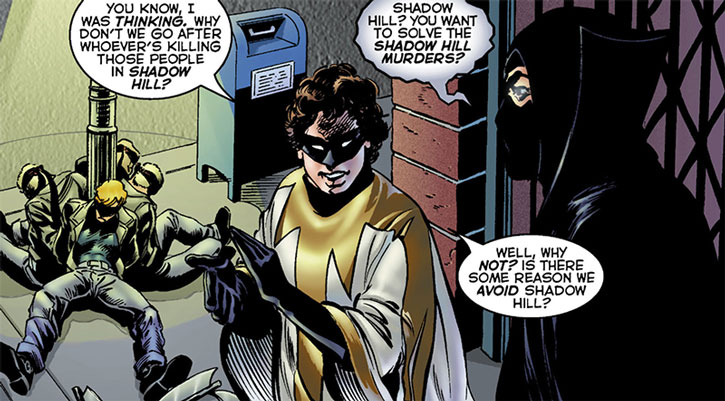 During that time, the Confessor and Altar Boy narrowly stopped the killer vigilante Gunslinger – though nobody cared. These and other incidents gradually led Brian to deduce the true nature of his mentor, then learn his life story.

Meanwhile, the situation between the authorities and Astro City’s super-heroes escalated into violence. The alien-manipulated police and E.A.G.L.E. forces arrested heroes or drove them into hiding. Brian wavered and was about to quit. But the Confessor convinced him to keep fighting even in the face of rejection by the people.

The Confessor sacrificed himself to expose the Mayor as an alien shapechanger. Altar Boy was nearly killed in the fray – but the heroic Crossbreed saved Brian and healed his wound. A global battle centred on Astro City erupted against the invaders, who in the end were forced to surrender and leave.

But you’d never cry to them

In the wake of this crisis and the Confessor’s sacrifice, Brian discovered that his mentor had prepared his legacy. The young man had ample financial resources, the Confessor’s old headquarters, and an extensively massaged paper trail. After a few weeks of reflexion and visiting the graves of his parents, Brian Kinney took his decision.

He trained, travelled and studied intensively from 1997 to 2001 – until he knew that he was ready.

Brian’s costume under the surplice is essentially a featureless black ninja costume. Albeit with a domino mask rather than a hood.

At first Brian is an eager teenager, doing everything he can to become an admired super-hero. He’s physically gifted, observant and intelligent. He also pays close attention to the Confessor’s lessons.

His original motivation isn’t pure. He wants to be a respected, admired, even feared figure as his personal social revenge. The potential for female admiration doesn’t hurt either. 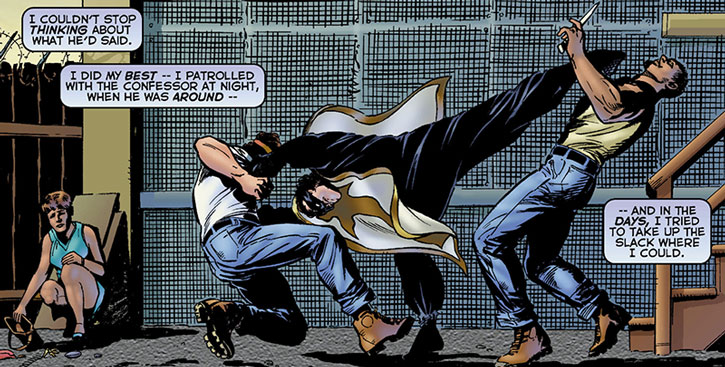 At this stage, he thinks that his father’s idealism just made him a failure.

Due to his youth and talent, his successes as Altar Boy can get to his head. After a pretty student told him that she thought Altar Boy was cute, Brian kept grinning like an idiot and admiring himself in every mirror. However, the businesslike and coldly efficient Confessor never had a problem deflating these little ego trips.

During his apprenticeship, Brian matures and grows rapidly. He starts as a bright kid, but by the time he discovers the Confessor’s true nature he’s an intelligent adult with a well-developed sense of empathy.

In particular, he struggles with super-hero life being way more complicated than he originally thought, and with doing the right thing and public admiration often being orthogonal.

Though his original project was essentially to become a beloved star, Brian Kinney ends up adopting the philosophy of self-sacrifice for the common good that was his father’s and his mentor’s.

(Proudly, to the Confessor) “I looked at the patterns, and I saw the flaw. Just like you said.”

“You wanted me to figure this out. You let me. Maybe I put the clues together, but you let me see them. You didn’t have to.”

Benefit 1 (Protégé of the Confessor), Equipment 1.

Altar Boy is known to carry very minor equipment, but only one bit (strong smelling salts) was shown. 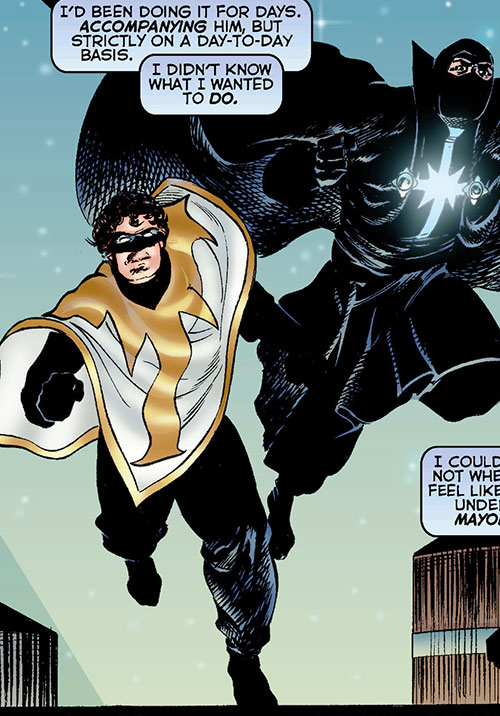 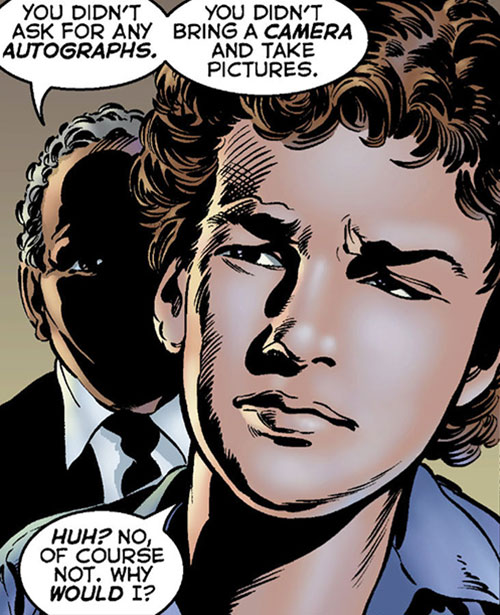