Bundy apparently has some degree of US Army Special Forces training.

He is a cyborg with an obviously artificial right arm (à la Cable). His entire body seems to be strengthened, and he’s pretty big to start with.

It is possible that he has further enhancements. For instance, he may wear sunglasses because his eyes are also visibly artificial.

Amalgam has access to street-grade illegal Amertek technologies such as BG-80 rifles and Tar. Howbeit, a cyborg using Tar would likely be a very bad idea, and he’s too canny to use that kind of drugs anyway.

“Doc” Bundy is an OG  of the Washington, DC scene. He apparently got an education well beyond that of the typical gangbanger. From context, I would guess he started medical studies, then aborted them and joined the military.

The Army tried turning him into a dental assistant. But after a while, he was tapped for the Special Forces. Whether he completed his training and served, in either of these capacities, is unrevealed. He eventually left the service.

Bundy was turned into a cyborg under unrevealed circumstances. It is possible that he was an experiment by American company Amertek, possibly with the backing of the US military. Perhaps there was a training accident ?

Returning to his old haunts in DC, Bundy was now a fixer. He no longer ran with any gang, and was solely interested in getting richer. He hired two tough guys (presumably also ex-military), made an abandoned dental clinic into his HQ, and adopted the name Amalgam. This was a joke referring to his past involvement with dental surgery.

This image earned him the “Doc” nickname. Or perhaps it strengthened it if he already had it before he left for the military.

Amalgam made much of his income as an arms dealer. In particular his unclear contacts with Amertek allowed him to regularly score small quantities of BG-80 man-portable energy cannons. This model was called the Toastmaster by US street gangs.

An exclusive sourcing contract was negotiated by the Central Avenue Skulls gang. Still, the feared Amalgam was adamant that they maintain security about their provider.

In 1994, John Henry Irons aka Steel returned to Washington D.C.. He continued his crusade to destroy the BG-80s used for criminal purposes, feeling haunted by the persons killed by the technology he had developed. Steel managed to make a young Skull called “Spiral” talk. Thus, he learned when and where the Skulls would buy their next lot of BG-80s, and wrecked the shipment.

Learning about this from his crew, Amalgam had the Skulls scour their ranks to find the traitor. However, Spiral framed Jemahl Irons instead. The young Irons was brought to Amalgam’s “clinic”. However, his uncle John Henry tracked him there and burst in. He saved Jemahl and engaged Amalgam in hand-to-hand combat.

Though the arms dealer was easily defeated, he managed to kill Spiral before Steel knocked him out.

Amalgam was soon sprung by Amertek lawyers. Colonel Weston from Amertek tasked him with hitting the Irons family. Amalgam arranged the street contracts, which resulted in the hospitalisation of Tyke and Natasha Irons.

Amalgam’s word balloons have a blue-grey border. Which I would assume means his voice has a metallic quality.

A tough guy and street capitalist, with a decent vocabulary and precise diction. Though he’s just looking out for number one, he seems to have a generic military sense of honour. In particular, he hates traitors and informers.

“Tell the Central Avenue Skulls to find their informant and bring him to me… or I cut off their supplies.”

“You are a traitor. Your own gang has delivered you to me. And in reparation for your transgression, you will forfeit your life.”

His Skills are chiefly extrapolated from his background. 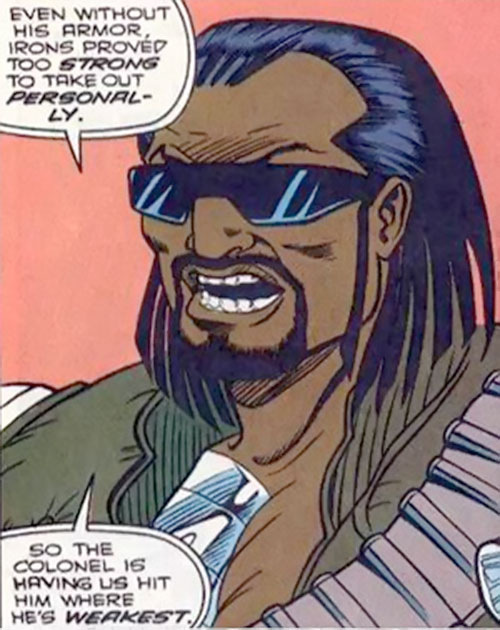 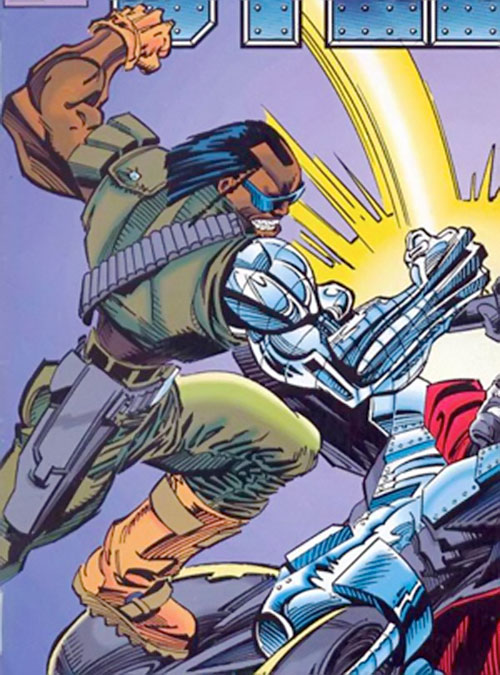