The Amazon is one of these adventurers. Here is what little is known about her.

Diablo II was a huge success both because of a highly-polished gameplay, and the atmosphere within the setting.

The Amazon is a deadly archer from the Twin Seas . Her reflexes, training and coordination allow her to shoot an impressive volume of arrows with great precision.

She knows a magical technique to nock multiple arrows at once and let them all fly with decent power and precision, though doing so requires a bit of magical energy she might run out of in extended engagements.

Her style of combat is very mobile, as she strives to remain at range and shooting – often conducting a fighting retreat and luring opponents after her. Her magical quiver holds hundreds of arrows and she can procure more from the corpse of enemy archers.

Thus, ammunition is not normally a problem and the Amazon can afford to put a lot of wood in the air. 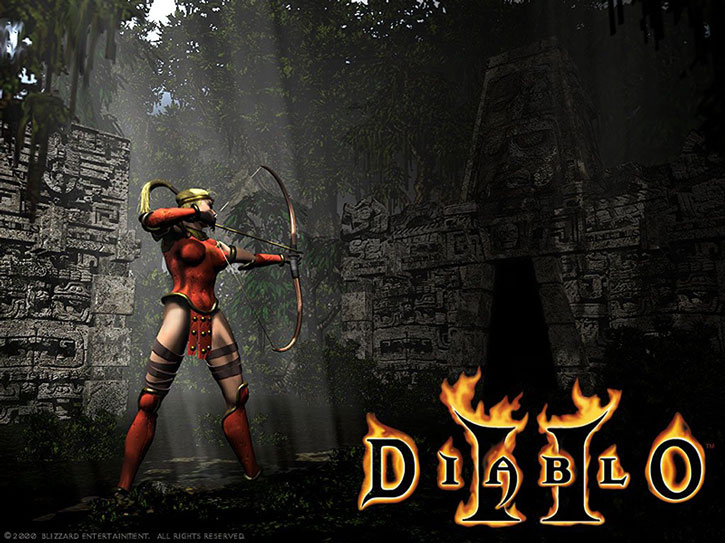 Like most adventurers, the Amazon knows how to use magical supplies such as gemstones, which hold energy that can easily be turned into enchantments. Though minor enchantments on weapons and armour are common among those who can afford them, gems have the advantage of allowing enchantments tailored to the user’s need.

In the Amazon’s case, her bow shoots arrows through the jaw of a small bejeweled skull mounted on the body of her weapon, bestowing them a cold enchantment (freezing her enemies and keeping them at bay) and a vampiric enchantment (healing minor wounds suffered by the archer).

The Amazon is a fighter from the Twin Seas Islanders culture, renowned for their civic sense, ethics and discipline. These proud men and women follow a unique faith that stresses organisation and collaboration.

Though their native, jungles-covered islands offer poor resources, the Islanders have nonetheless built a sea-faring civilisation with beautiful, well-run cities. They are reputed as fighters, strategists and loyal mercenaries.

The religion of the islanders is called Order. It is pantheistic, but each divinity of Order has a precise role they fill by tightly collaborating with each others, just like their worshippers. 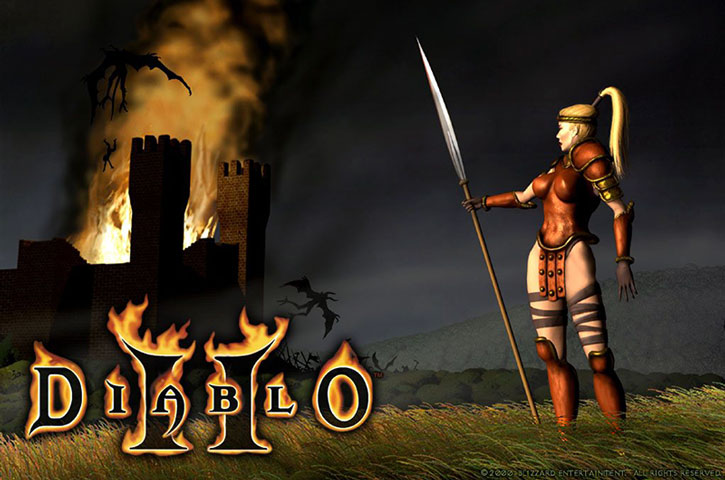 The two most senior ones are goddesses named Athulua and her consort Kethryes, who jointly rule over the seasons and weather. Order seems to also be an ancestors cult, as the divinities are ascended versions of the original island settlers.

The islanders regard the destruction of the Three Prime Evils , and freeing mankind from their callous oppression, as their destiny. The Three are Mephisto, Diablo and Baal – the most powerful Lords of Hell, united in a fragile alliance.

Though the Prime Evils were imprisoned by the Horadrim after the Sin War, Twin Seas Islanders oracles accurately predicted that they would return to ravage the world.

The Amazon is an adventurer and mercenary. Twin Seas Islanders are well-regarded as mercs, having a reputation for discipline and loyalty.

Like most professional fighters from the Twin Seas she’s a woman. Common wisdom among Islanders is that the women are more dexterous and better suited to the use of their traditional weapons – spear, javelin, bow.

The Amazon has some ties with the Sisterhood of the Sightless Eye , another culture where the fighting forces are chiefly female archers favouring a lightly-armoured, mobile fighting styles.

The Sisters (often called “Rogues” by the locals) occasionally hire Islanders as they integrate well with their own forces. They operate a fortified monastery allied with the forces of Heaven, usually called the Rogue Monastery, near the village of Tristram . 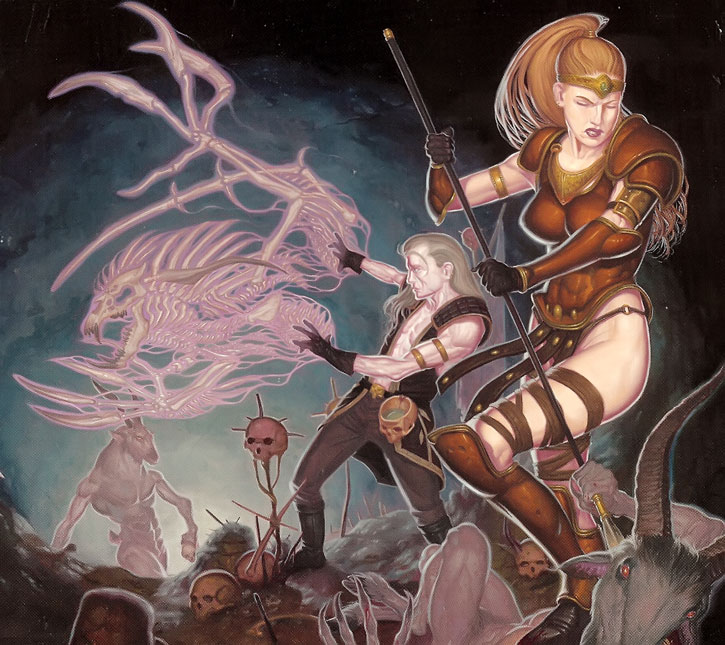 The unnamed amazon, allied to the unnamed necromancer, fights goatmen.

Hearing rumours that these former employers of hers were having serious problems, the Amazon travelled to the area to look for work. The problems were indeed serious. The forces of Hell had unexpectedly stormed the Rogue Monastery, killing many Sisters and corrupting most of the survivors.

A potent demon named Andariel  was now running the place and building up her forces, with what little remained of the Sisterhood unable to oppose her.

You have quite a treasure there in that Horadric Cube

The Amazon agreed to run search-and-destroy missions to contain evil forces in the area. Seeing her skills in actions, the Rogues started contracting her to strike against specific areas and, ultimately, go after Andariel herself.

The Amazon also rescued Deckard Cain , town elder and last of the Horadric Mages, whilst investigating the demons-occupied ruins of Tristram.

Cain bore dark news. The great evil Diablo had apparently possessed the man who had killed him years before. The fallen hero was now on some infernal quest across the world of Sanctuary, and had been the one who summoned Andariel to take the Monastery.

A tough professional fighter, the Amazon can’t stand the forces of Hell and will agree to fight these ravagers for even a modest stipend. She seems to like the Rogues.

“I sense great sorrow and misery.”

“I shall purge this land from the shadow !”

Bonuses and Limitations:
Weaponry has Multi-Attack 2, but this Bonus has a Minor Burnout.

The “Arrows of vampiric cold” Power is a shorthand for what could be handled by Projectile Weapons Combined with Snare Combined with Vampirism, since multiple Combined Powers are a bit of a bother in-game. Our suggested mechanic to keep things simple and streamlined : 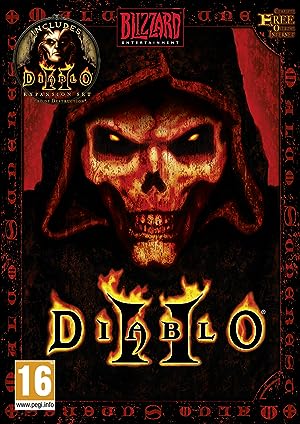 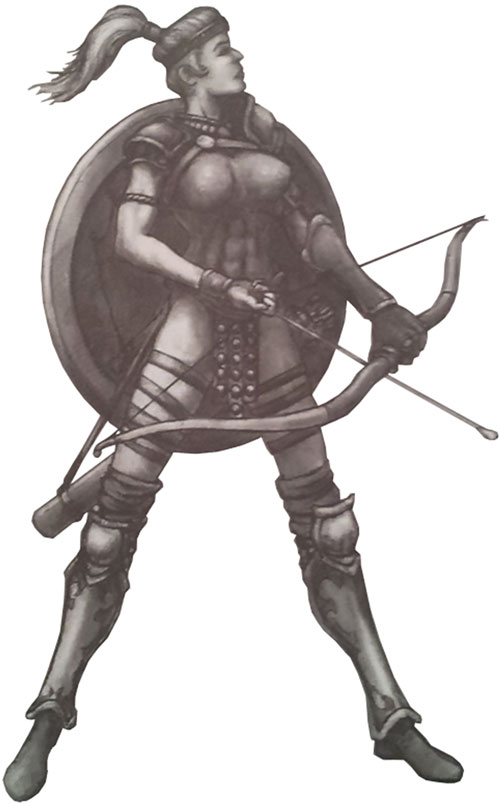 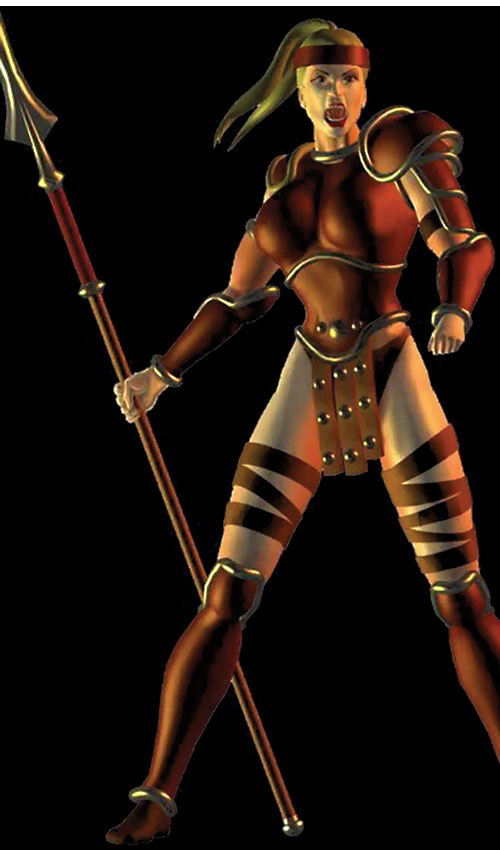