“East of the wind and west of the road lies the land called Karkassone. It is a pleasant land for the most part, with meadows, hills and grassy dales. Yet there are also moors and spirit-haunted swamps, and pools where pixies are afraid to play !”

Warren Publishing was an indie publisher that lasted from the late 1950s to the late 1970s.

They were doing non-Code magazines, usually in B&W. These were in a vein not unlike the fare that had led to the Wertham et al. moral panic about comics.

Vampirella was their breakout character. Most others were a bust.

After he left DC, writer Gardner Fox did some stories for Warren.

Fox is one of the Great Old Ones of DC Comics’ Golden Age and beyond. He wrote a zillion stories, co-created the likes of Hawkman, Flash (Jay Garrick), Batgirl (Barbara Gordon) and Sandman (Wesley Dodds), wrote the foundational “Flash of Two Worlds!” story, and so on and so forth.

But his minor Warren stories we’ll discuss here were early 1970s swords-and-sorcery pulpsCheap, often lurid novels in the US during the 1920s and 1930s.

To a Generation X reader, they seem to be Dungeons & Dragons-style adventures. Or in the vein of Fritz Leiber’s then-contemporary Fahrd & Grey Mouser material.

This is a bit deceptive. Like Leiber, Fox was born during the 1910s. So the material is descended from the original pulp fiction fantasy à la Howard. Rather than from the nostalgic revivals of these genre stories.

I was looking to do a small thing as a distraction from the research-heavy Inhumans arc. And the article had already done the grunt work of tracking down the appearances. So, yay.

Also, some illustrations therein are NSFW in some countries. Unsurprisingly.

She’s articulate, familiar with the supernatural, and well-educated. 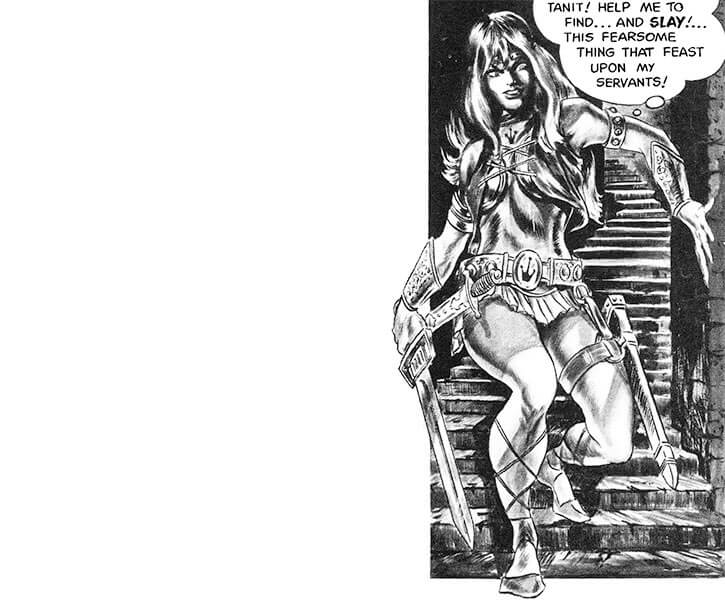 Amazonia is also clever and resourceful. Though the former gets undermined by a certain brash overconfidence.

She’s in great shape. The art amply informs us of that.

Her education in magic seems excellent. She knew more about the properties of demon soil than a demon-god did. She could recognise spells, gods and artefacts on sight. This is probably her most distinctive asset.

Once she reclaims her throne, Amazonia is advised by the astrologer Theonides. He knows his ancient lore and prophecies, and can make vague but accurate foretellings.

She once wielded a magic sword, which sparkled with eerie fire when hitting demonic creatures. This allowed her to slay minor specimens with but one blow. But it was destroyed early in the first story.

Amazonia replaces it with Excalifer. This beautiful broadsword’s magic steel doesn’t melt when exposed to demon blood. And it later acquired demon-slaying properties from being plunged into magical demon soil.

When outnumbered, Amazonia draws a long dagger and fights with two weapons.

She doesn’t wear body armour. Since that would prevent her scant clothing from getting shredded and leaving her mostly naked for the bulk of the story. Can’t have that.

(One caption describes a leather jerkin and mail shirt, but the panel underneath shows her in stripper gear. A chain shirt is mentioned in the next story, and there… progress ! She indeed gets to wear body armour, but… only the sleeves.)

Something nerdy from 1970, mmm… Let’s go with Iron Butterfly, who had a brief but influential acid/psychedelic rock career.

By 1970 they were already fading out. But Butterfly bleu remains IMO good even if you’re not stoned.

Amazonia is the daughter of Fedrik, King of Karkassone, and an unrevealed barbarian woman. However, she was raised abroad – in the Northern lands.

(Carcassonne is a Southwestern French city, dating back to at least the sixth century BCE. It is famous for its impressive fortifications, built during the 1200s. Yes, that’s also whence the name of the best-selling boardgame comes.)

Her guardian was one Dyzlann the Sorcerer, who took good care of her. He also hired mercs and travellers to teach her swordplay from a young age.

I’m written, can read my mind, I am defined

But the necromancer also insisted that she follow her destiny, as written in the Book of the Elder Gods.

Karkassone had been taken over by usurper Hermotimos the Hateful, backed by the sorceress Llyrith the Unholy. This may have been the reason for Fedrik’s death and Amazonia’s exile.

Amazonia still held the Iron Crown of Karkassone. But eventually, Dyzlann sent her Southward to hand it over to the usurper. That was what was written in the Book.

Deep in the demon-haunted glades of Wizard’s Wood !

On her way, Amazonia rescued a handsome bloke in a loincloth. He was a sacrifice to the corrupt god Skorpovion.

Incensed, the vile divinity sent after Amazonia a demon with, hmmm, special clothing-shredding magic claws. He also used spells to abate their will to fight, but Amazonia conquered that.

In anger, Skorpovion destroyed her magic sword and sent in more servants. These captured the disarmed humans.

However, Amazonia brandished her crown, made of cold iron. This repelled the demons and the evil god for a spell. The two Humans made a break for it. 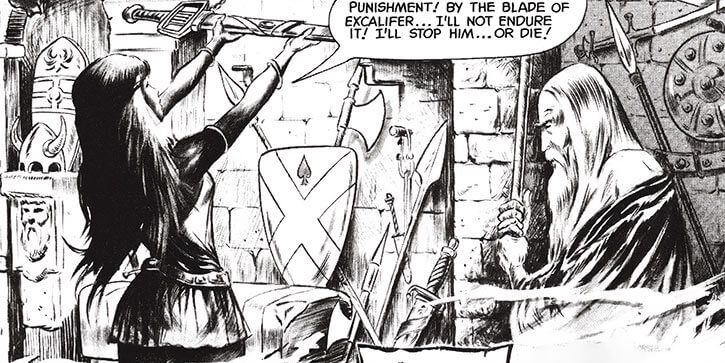 Excalifer the enchanted ! A blade to thrall the heart of any fighting maid !

Handsome Muscular Bloke In Loincloth (a Parphari mercenary) knows of the magical sword Excalifer. It fell from the skies centuries ago, and is guarded nearby – by “starving saurians dwelling in [a] pandemoniac pool”.

The escapees need a weapon. And Amazonia realises that a recently lightning-felled oak can be climbed to traverse most of the pool, out of reach from the ravenous monsters below.

Using a rope, she tarzans across the remaining distance and draws Excalifer.

Llyrith the sorceress espies this in her crystal blade. She sends in a demon, but Amazonia slays it. The path is clear and she can enter Karkassone, T&A hanging in the breeze.

Can the cold iron be washing away a cantraipal spell ?!

Amazonia walks into the throne room crown in hand, as per the Elder Gods’ prophecy. She angrily shoves it on the head of Hermotimos the usurper. But the cold iron breaks a spell !

“Hermotimos” was her dad Fedrik all along. Llyrith had magically disguised him and kept him in thrall for years.

With the spells broken the old man dies in peace. But he warns his daughter — now the Queen — that the Sorceress will likely attempt to take the throne again.

Stonemasons discover a sort of dungeon under the royal palace of Karkassone. Some kind of monster lurks therein, and starts preying on the staff.

The astrologer Theonides determines that it is the remains of a demon-god slain aeons ago, in the temple that preceded the city. But having a Queen on the Karkassone throne corresponds to yet another prophecy, reanimating the thing.

Amazonia boldly goes in – alone. But as she confronts the demon, it makes itself immaterial to ignore her sword, then strikes back. Amazonia is felled.

Foolish mortal ! You have come as legend foretold !

However, Amazonia falls into a sort of sandbox. It holds soil from the demon’s home world. This kept him alive, a bit like a vampire. But, unlike with a vampire, the magic soil now protects Amazonia.

The demon entombs the Queen, takes her fallen sword, morphesImpossibly shifting into another form into her likeness, and leaves to take over Karkassone.

However, the soil’s magic works better on Humans than the demon expected. Amazonia recovers from her near-death, and lifts her tomb’s lid. Her education in magic makes her realise that the demon soil is now attuned to her and Excalifer, rather than the demon.

She thus fills a basket with demon soil, and drags herself back to the surface. Throwing the soil at the demon does incapacitate it. Amazonia follows by a killing blow using Excalifer, now reinforced by having been plunged into demon earth. 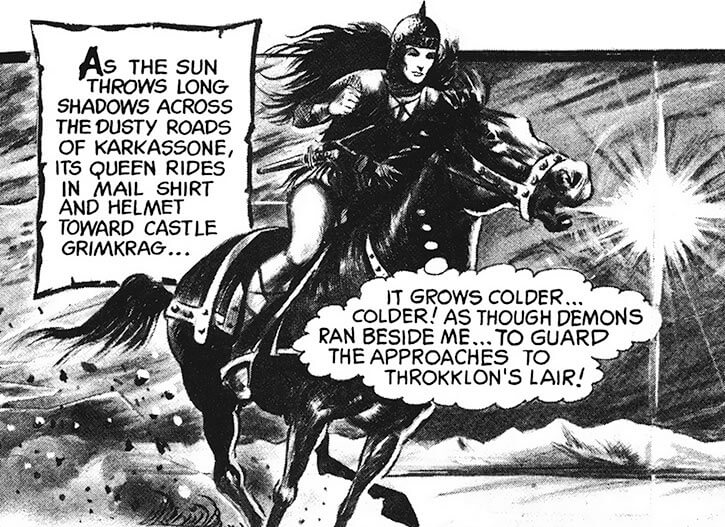 Dread, ancient Castle Grimkrag lies in a remote corner of the realm. The brigand Baron Throkklon the Terrible is based there, and his depredations have worsened.

While the castle is impregnable, the Queen decides to get there alone at night for a discreet recon.

At first this seems to work. But Grimkrag turns into a magical ambush, with Throkklon’s thugs appearing from nowhere.

As Amazonia realises a split second too late, Throkklon is in league with the dark god Grim Ozirios. Grimkrag is a gateway to the nether worlds, shifting whenever the god’s roaming eye blinks.

The mote in god’s eye

Queen Amazonia kills at least a score of brigands, fighting like a lion on PCP until she’s finally subdued. Inexplicably, this bloody melee leaves her wearing but shreds of her knickers.

She is to be burned at the stake. But as the fire starts, a scout brings news of a wealthy caravan nearby. The brigands depart in haste, and Amazonia manages to free herself from the stake.

By that point the brigands have returned. But as the eye of Grim Ozirios appears, Amazonia hurls her sword into it. This forces the castle back to the physical plane.

It also destroys Throkkon and his thugs, who had been brought back from the dead by the dark god. With no magic to animate them, they crumble into corpses. 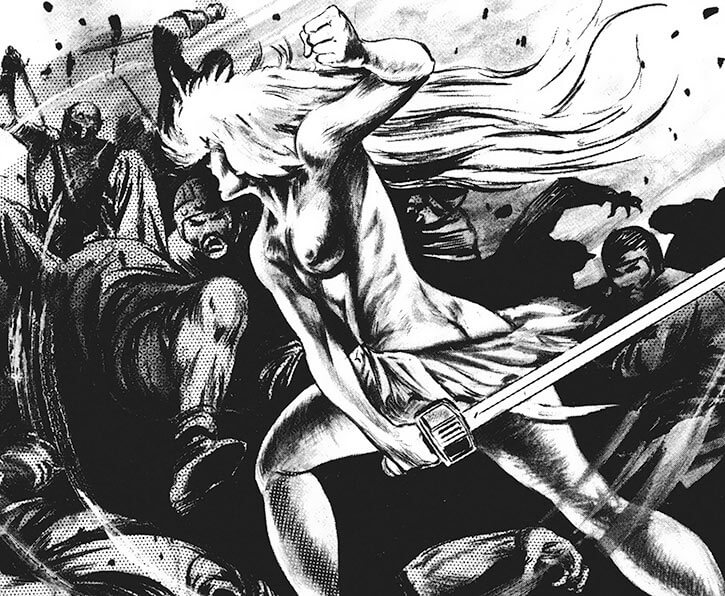 Aaaand there goes any hope of getting Adsense revenue from this page to pay our bills. If you think it’s ridiculous, I guess you could donate.

For the illustrations I’m going with the second and third stories, since these had Billy Graham  art.

She has a marked preference for adventuring alone, even when that doesn’t quite make sense, and forcefully solving the matter at hand. In her underwear.

Amazonia constantly invokes the name of Tanit, the love goddess of Karkassone.

“By the ten tinted toenails of Tanit !”

“Guide my swordhand, Tanit ! Help me find… and slay !.. this fearsome thing that feasts upon my servants !”

“To the Devil with caution, Theonides ! I am Queen of Karkassone !”

“At last… I understand ! For that is the fabled Eye of Dread Ozirios !”

In the DC Universe, Amazonia would likely have been a reincarnation of Hawkwoman. For obvious reasons.

She’d also fit in seamlessly in the Fifteen Worlds of the DC Implosion, particularly the worlds of Stalker or Claw the Unconquered.

She might also share a fantasy adventure with Wonder Woman. For instance, to fight the rival Queen of Chaldonor.

In the Marvel Universe, she might exist in the far past of the Femizonia future. And/or on Earth-616The main Marvel Comics version of Earth during the time of Kull. But she feels more DC-ish.

An amusing way to inject her into the MU would be that Excalifer is actually the Ebony Blade. Merlin didn’t forge it from sky iron – he reforged it after finding relics from Amazonia’s time.

She would thus, technically and retroactively, be the first Black Knight.

Weaponry (Melee) and Evasion seemed at least one AP lower in the earlier stories. She also had fewer Hero Points.

The DEX is lowballed since she seemed helpless when disarmed. The BODY is also low since everyone in the stories gets defeated/slain in one blow.

She’s a Queen, but since she always ventures alone with little equipment that’s not too meaningful in game terms.

The sarcastic Schtick could prolly be replaced with one that allows her to LDD with great efficiency as long as it destroys some of what she’s wearing. Schtick (Defensive Strip Poker) or something. But heh, prolly too involved for something that’s just a fancied up snide remark.