Believed killed in 1914 while in Mexico during the Mexican Revolution, Bierce in fact found himself on the run. Not from Mexican rebels but from the demons and devils of Hell !

The exact cause of this enmity is unknown even to Bierce. But it is assumed to have something to do with Bierce’s writing. While The Devil’s Dictionary  would seem the most likely cause, there is very little in it that anyone in Hell would find offensive. So it must be something else, or it’s just a case of a major power of Hell with no sense of humor.

Bierce was forced to turn to the occult to protect himself from his pursuers. Over time, he has become quite skilled at it. Whether his youthful appearance after nearly 80 years is due to gaining some form of immortality, being cursed to never age, or some other effect is unrevealed. Bierce won’t talk about it.

Some people in the mystical community have speculated that Bierce’s talisman is powerful enough to hide him from the Endless. If so, his continued existence is because Death hasn’t noticed he’s still hanging around. But this seems unlikely.

Advantages:
Omni-Connection, Scholar (Demonology), Misc: Either does not age or is immortal or something like that.

Drawbacks:
Arch Enemy (unnamed power(s) in Hell), Public ID (the name is occasionally recognized though most people will not think that he’s the actual Ambrose Bierce), Unluck, Misc: Frequently mistaken for John Constantine as they look quite similar. However, Constantine is never mistaken for Bierce.

Equipment:
Talisman [BODY 06, Invisibility: 25 (Mystic Link). Bonus : APs of Invisibility are applied against any form of detection, tracking or identification power such as Tracking Scent, Detect, Life Sense if it is an attempt to locate him specifically, Mind Probe if it is an attempt to learn his identity, or any other power that may be used to locate a specific individual. It does not function against normal senses, the Tracking skill or any power that senses generic information such as Remote Sensing or Life Sense when used to detect all life within range. Invisibility is also used to prevent the detection of the talisman with Magic Sense, though it will not conceal Bierce from being detected].

Obviously this precedes the Obscure Power, but the modernisation should be straightforward — Ed. 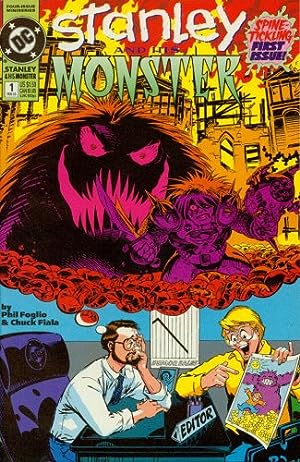 Stanley and his Monster by Phil Foglio.