This is the second half of this profile.

It is thus to be read after the first. This is the American way.

(This starts *right* where the previous half of the profile ended.)

As they returned, the Avengers were successfully ambushed by the Revengers. These were a team of villains led by the Red Queen (Hope Pym).

However, Mainframe assembled a rescue team. The Revengers were taken down.

The team continued to work and gain experience. They also made Spider-Girl (May Parker) one of their reserve members. Other reservists included Coal Tiger (T’Chaka), Earth Sentry (John Foster), Argo, and Blacklight (Kendra Freeman).

(At this point, the book with the Avengers of Earth-982 — A-Next — was cancelled. The bulk of the Avengers’ and American Dream’s activities thus remains unchronicled. But they continued to pop up in Spider-Girl titles.)

However, Spider-Girl eventually clashed with the team. Tony Stark had ordered the Avengers to go after the Buzz (Jack Jameson), whom Spider-Girl knew was innocent.

The situation degenerated, but American Dream refused to join the fray. 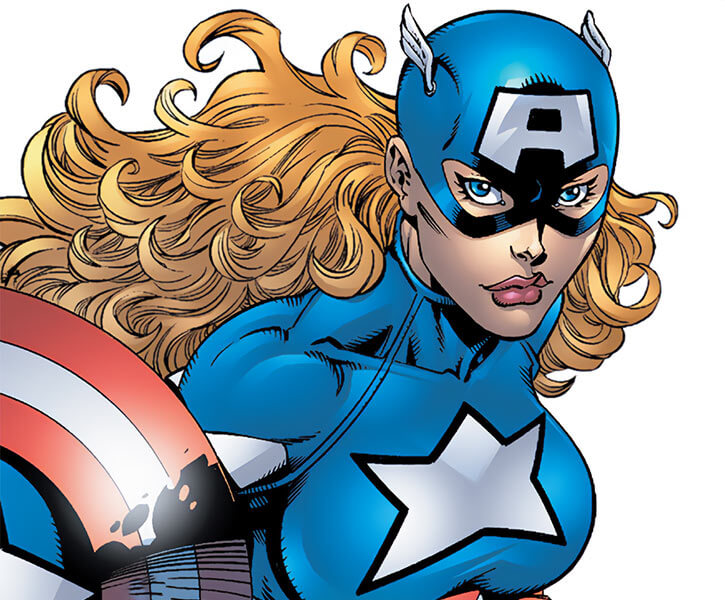 Home of the brave spider

Shannon later joined May to patrol Manhattan, and reaffirm that there was no bad blood. They ran into minor has-been hero the Steel Spider (Oliver Osnick).

Osnick was having a depressive episode over lack of recognition. He had held the line for years after more classic heroes had retired, to little acclaim.

American Dream and Spider-Girl helped him regain his confidence. They fondly remembered the Steel Spider’s exploits from back when they were tweens.

Months later, the pair crossed over to Earth-9907 to check on Thunderstrike (Kevin Masterson). Though Doom had fallen, this Earth was still in a terrible state.

The trio of Avengers clashed with the Fatal Five, the team led by one of ’em evil Reed Richardses.

This led to the Avengers teaming up with… basically every hero on Earth-982. They took down Seth, the Ancient Egyptian god of not particularly nice things.

During this case, both Thunderstrike (Kevin Masterson) and Captain America (Steve Rogers) returned to Earth-982 and the Avengers. 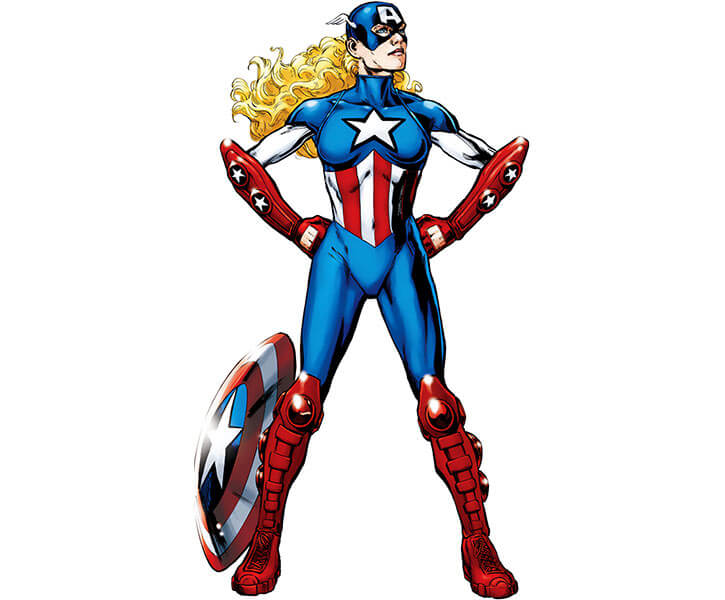 Shannon and the rest later came in to help Spider-Girl and her dad (Peter Parker). The Parkers were assisting the retired Electro (Maxwell Dillon). The heroes convinced Dillon’s daughter Allison, a.k.a. Aftershock, not to embark on a life of crime.

However, the Avengers had become too comfortable in their ways. The team was getting mired in its own protocols and ample budget, and acted self-important. As a consequence, they under-performed when Apox the Omega Skrull attacked. This left Spider-Girl and the Fantastic Five to handle the situation.

They were also outmanoeuvred by Loki when he launched a huge plan to end the new Heroic Age. American Dream was among those whom Loki kidnapped, then turned against the others.

Though Captain America was too old to fight, he saved the day by depriving Loki of his mind control gem. This freed Shannon’s mind, but just in time to see Cap slain by Loki.

I was going to go with Bowie’s Young Americans. But that’s from 1975. And the previous half also had a 1975 song. So let’s leap ahead by 20 years or so with Dead Can Dance.

She hurriedly rejoined when Galactus landed. Shannon was assigned to a damage control team with J2, Stinger and Spider-Girl.

As it happened, this peripheral team played a critical role. J2 threw the three lasses in shrunken form into Galactus’ machinery. They managed to destroy it at the last second.

Though Earth was saved, the Avengers largely fell apart.

American Dream took charge and attempted to reinvigorate and renew the Avengers. However, this was rocky. She was still a bit young for such a task.

Early during Ms. Carter’s efforts, the Avengers were attacked by Sylene, Loki’s daughter. She was allied with the troll Ulik and mercenary thief Warp. She also stole and reactivated Ultron. 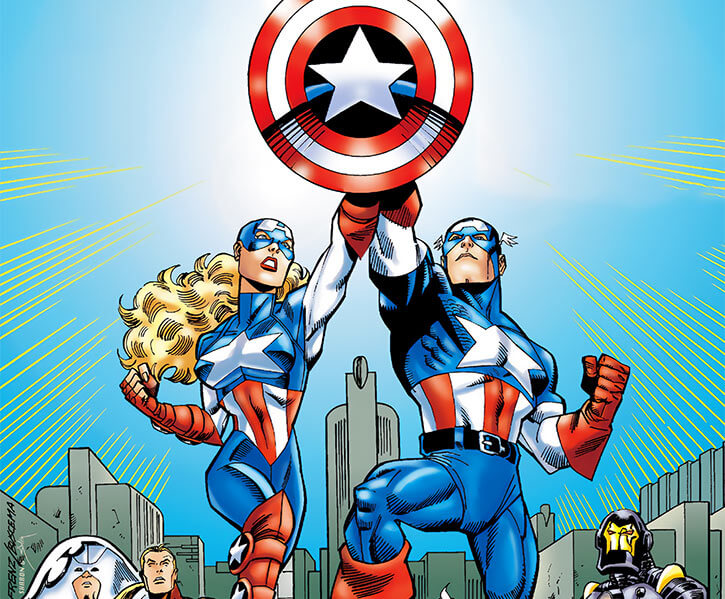 Through a mix of randomness and taking a chance on newcomers, American Dream ended up with an experimental lineup :

While it was a close call, the Avengers scored a solid victory against Sylene. Furthermore : 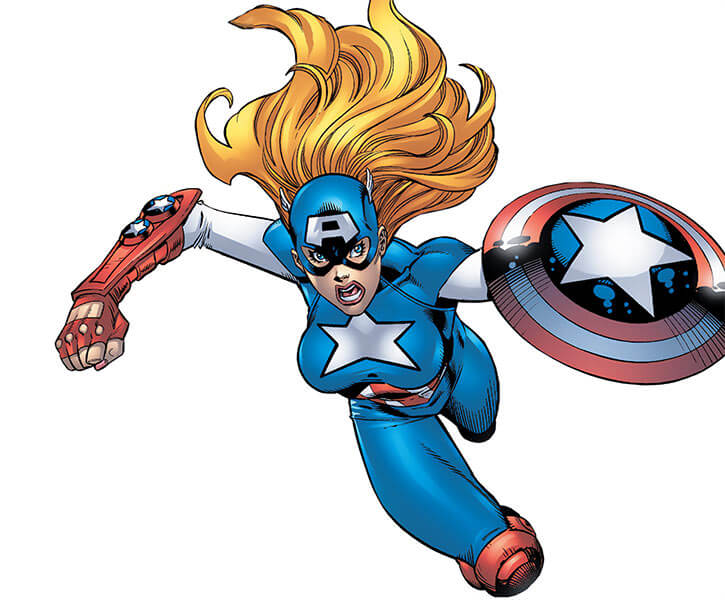 Shannon Carter was then approached by one Sophina during a Mansion tour. She was trying to reach American Dream. Sophina’s lover Marco, and many other men, had gone missing. But everyone was an undocumented immigrant, so she couldn’t turn to law enforcement.

Dream took the case. She discovered that the men had been kidnapped by powerful super-criminal Silikong. However, Maria Hill of S.H.I.E.L.D. forced the NYPD and the Avengers to stop investigating. She wanted to confiscate Silikong’s tech without witnesses.

As a result, Shannon quit the Avengers. In this way she could close the case without dragging the whole team into legal trouble. However, she found herself outmuscled – especially after Silikong allied with the Red Queen and Ion Man.

American Dream prevailed against all odds. Silikong and his allies were arrested.

However, Ms. Carter didn’t rejoin the Avengers right away. She took a break to get herself a life for a bit.

Brought together by a strange quirk of fate !

American Dream later was among the allies Spider-Girl gathered to face Hobgoblin (Roderick Kingsley) and his forces.

The fight did not go well. Shannon likely had to be hospitalised.

Later on, Elder of the Universe the Contemplator (Tath Ki) saw that the Captains America of numerous realities were vanishing. He assembled a “Captain America Corps” :

The Contemplator sent the Corps to a typical reality missing its Captain America – Earth-11418. Rogers’ absence had resulted in the Avengers soon disbanding. The Americommand (an authoritarian, far-right super-team) then took over the country. 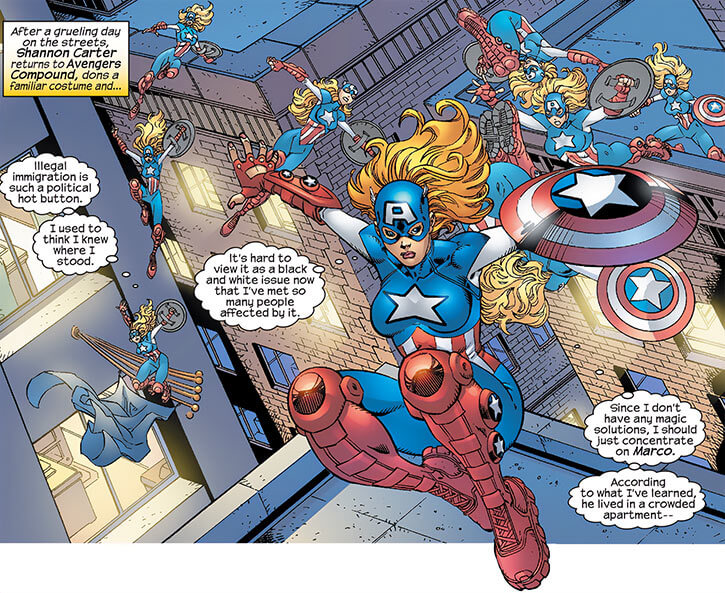 Ms. Carter’s knowledge of the Avengers’ and Captain America’s history allowed the Corps to quickly deduce the truth.

The whole plot had been engineered by Broad-Stripe, a technological and manipulative genius. Wentworth had masterminded the disbanding of the Avengers, and had always been the power behind the Americommand throne.

She had eventually secured a Cosmic Cube. However, her experiments with using it as a power source for her time probes were endangering all of reality.

The Steve Rogers of 1941 took command of a motley army of rebels from Earth-11418. Most of them were former super-heroes, super-villains or elite operatives. These and the Captain America Corps then undid Ms. Wentworth’s plan.

The two Corps members from the future — Commander A and American Dream — remembered these events. But the Contemplator made the others forget.

I don’t need your secret war

When American Dream was seen again, she was back to commanding her original Dream Team. This seemed to be an Avengers spin-off (maybe), with several MIA members somehow back on the roster.

The Dream Team and the Avengers were hypnotised by the Red Queen and Enthralla into hunting down Spider-Woman (May “Mayday” Parker). However, Ms. Parker tricked Enthralla into making mental contact with Darkdevil (Reilly Tyne). This knocked Enthralla out and freed the heroes.

(These events took place whilst the 2015 Secret Wars event was ongoing. It is thus possible that what was seen was an altered reality, or was retroactively altered by the recreation of the multiverse. Yes, that was a normal sentence.) 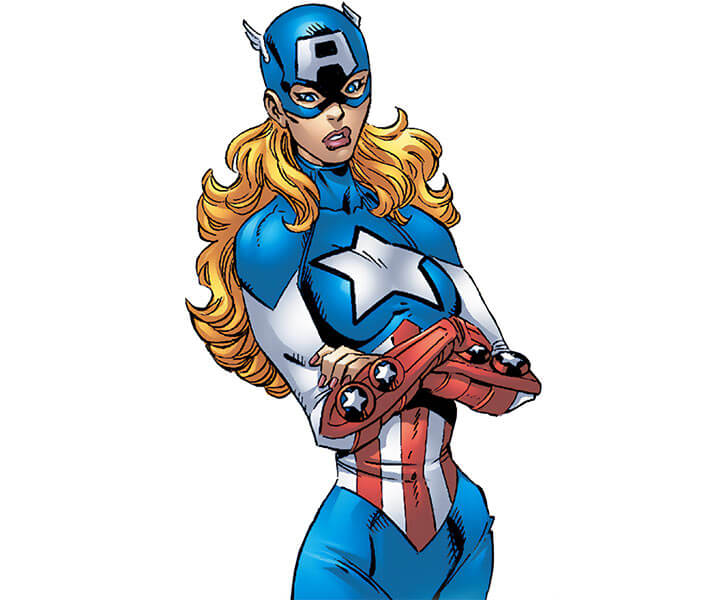 That she’s six-two is stated in the dialogue. *However*, Bluestreak tends to exaggerate. And in the material she isn’t consistently drawn that tall, so I adjusted those values.

(Of course, it could be another example of a female character built for strength whose appearance quickly evolved to become a centrefold model. So feel free to keep the original take if you like it better).

The adjusted weight is a handbook-scale lowballed one – a more realistic value for 5’11” and her physique would be 175 lbs. (80 Kg.) or so. As always, use whichever version you prefer !

For much of 1999 and 2000, American Dream had short hair. She had to hack it off to free herself from a hold by the SS Agent. 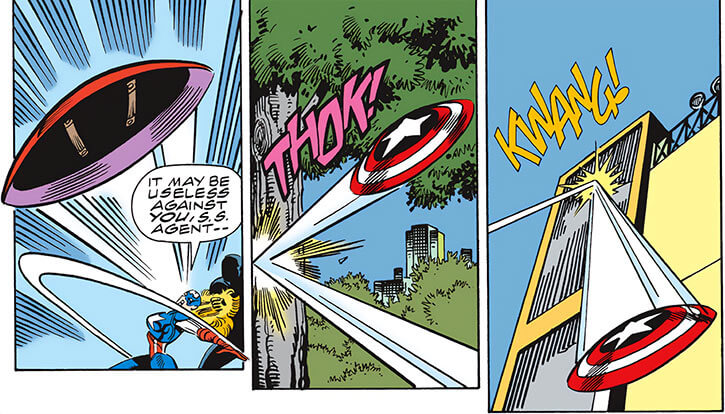 American Dream is one of the most straight-arrow, goody-two-shoes, ethically-unchallenged, idealistic, wholesome persons around. She lives and breathes to prove herself worthy of her uniform, every single minute of her life.

In some ways, her passion for the values once championed by Steve Rogers evokes the love of a young nun for Christ.

She’s a pure paragon/champion type. Anything a squeaky-clean, selfless, dauntless, spotless super-hero would do, she does without hesitation.

She *will* reflexively risk her life to save the bestial mutated monster that was trying to kill her. She *always* takes the high road.

No rest for the virtuous

Shannon is exceptionally serious. She refuses to waste any time on trivial pursuits. Her only “downtime”, to maintain her mental health, is her part-time job.

It is likely she never was in any sort of romantic and/or sexual relationship. And she lacks certain common sense habits stemming from having an ordinary life.

The last time she did something “normal” was in high school. And even there her focus was on physical training.

Likewise, what little ordinary clothing she has left are a few articles she used to wear in high school.

Over time, she developed the light-hearted type of super-hero banter. This seems based on her friend Spider-Girl’s. However, it’s not actual comedy. It is more of a formulaic routine to help her focus while distracting some opponents.

From there, she gradually returned to Steve-Rogers-style rousing speeches as her confidence developed.

Originally, Shannon was a small-town conservative raised by a law-and-order father. As she met more people, defended the downtrodden, and strove to act in a just and kind manner, she became more of a liberal. But she can be a bit naïve, due to the no-lifer thing. 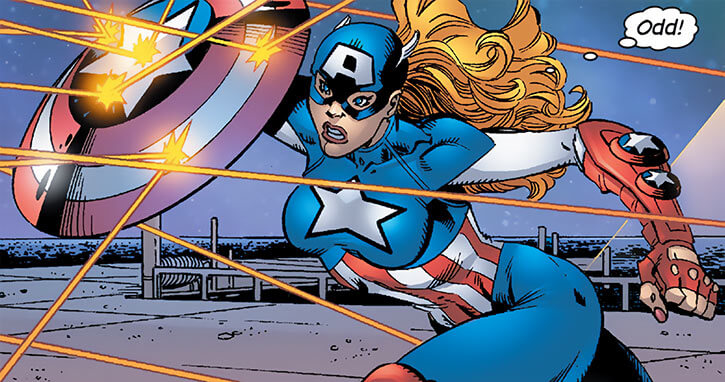 “It’s over Serpent! You’ve lost ! Your cause is a sham, and you’re a disgrace to this country ! You preach hatred, claiming to represent true Americans but nothing could be further from the truth !”

“Good afternoon, gentlemen. I understand you do a thriving trade in illegal armaments. My name is American Dream. I’ll be your Avenger this afternoon.”

“For your own safety, I advise you to drop your weapons and surrender peacefully. The police are outside and — dare I say it — resistance is futile.”

“Armed guards… and they seem to be herding those immigrants into that truck. This isn’t how my government is supposed to operate.”

Thug: “You could have taken his head off !”
Dream: “Could have. Didn’t. Avengers don’t kill. Concussions, however, are quite permissible. Nighty-night.”

“I didn’t join the Avengers because I like to fight, mister… I’m here because someone has to protect the innocent from power-mad lunatics like you ! If my job requires a few lumps… so be it !”

“My parents were also taken much too soon. They both wanted to make a difference in this world. I chose to be that difference. That’s why I train and sacrifice. That’s why I wear this costume. I am their dream. Their hope for a better tomorrow.”

Another approach would be for her to be a particularly successful clone of the Guardian (Jim Harper).

MIA toward Upholding the Good. 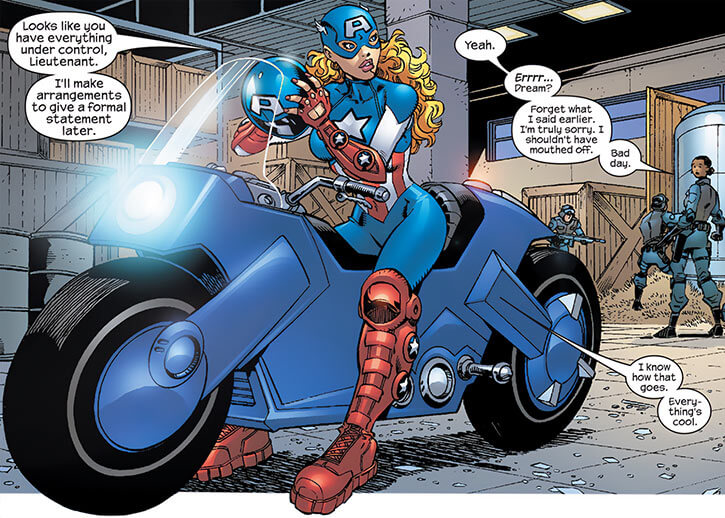 The shield was only used to reflect an energy blast once, so it’s not in the stats block. Since Ion Man’s attacks have special metal-shearing abilities, I suspect it’s more of an obscure weakness of his, having to do with the shield’s unique properties.

But there’s a wobble as to Shannon’s competence. It’s not a clean progression. Sometimes she has my stats, sometimes she has Jay’s. A lot of it depends on previous events that took place off-panel. And on whether it’s her story or Spider-Girl’s.

The 2008 LS also made it clear that, while she technically has the Secret Identity Drawback, it plays next to no actual role in her life.