Although Shannon has no super powers she is a highly trained athlete and martial arts expert.

When Shannon Carter was young her parents were killed in a car accident and she was left in a wheel chair. She went to live with her father’s cousin Peggy Carter. Peggy used to work for the Avengers and told Shannon inspiring stories of Captain America and Peggy’s sister Sharon Carter.

Shannon worked to overcome her injuries and regained use of her legs. She later trained as a gymnast and hoped to become a hero. She got a job as a tour guide at the Avengers headquarters after the team had disbanded. She was working on the day that the Avengers were reformed under Mainframe III, J2, Stinger III and Thunderstrike II.

She decided to try out as an Avenger and designed a costume based on that of Captain America. With the rest of the Dream Team, Bluestreak II, Freebooter, and the Crimson Curse, she joined the Avengers as the American Dream. Alongside the Avengers and the Coal Tiger she helped confront the Soldiers of the Serpent when they kidnapped Vibraxis.

The Sons, planning to broadcast their triumph into America’s homes, had broken into the national airwaves. But this only meant that a huge audience saw American Dream save the Wakandan Ambassador and give a rousing soliloquy.

American Dream was a member of the Avengers contingent that investigated the possible return of Doctor Doom to Latveria. They discovered that it was actually Stinger III’s old love Kristoff Vernard.

They agreed to tell SHIELD that it had been a false alarm. This gave Kristoff time to destroy Castle Doom and its arsenal. On the other hand it reinforced the opinion of many people that the new Avengers were collection of second-stringers and wannabes.

Digging into the past

American Dream was present giving a tour when the Avengers headquarters was invaded by Argo, who wanted to try out as a member. When the Avengers learned that Argo was the son of the former Avenger Hercules, they looked into Hercules’ final mission as an Avenger and discovered Hercules himself in hiding.

Hercules has never recovered from the deaths of several Avengers on that last mission but was finally reconciled with his son.

Continuing to dig, the Avengers learned that the mission that led to the disbanding of the old Avengers was a battle on an alternate Earth. When they traveled there, they discovered their world’s Captain America organizing a resistance against that world’s Doctor Doom, who ruled it all and wanted to expand to other Earths.

While there American Dream was forced to cut off her hair in a battle with the S.S. Agent (that world’s counterpart to the U.S. Agent). On the other hand she gained possession of the shield of the Captain America native to that world, who had died long ago.

Off with her head !

When the Avengers returned home to their Earth they were ambushed by the Revengers. These were led by the Red Queen, the daughter of the Wasp and Hank Pym. 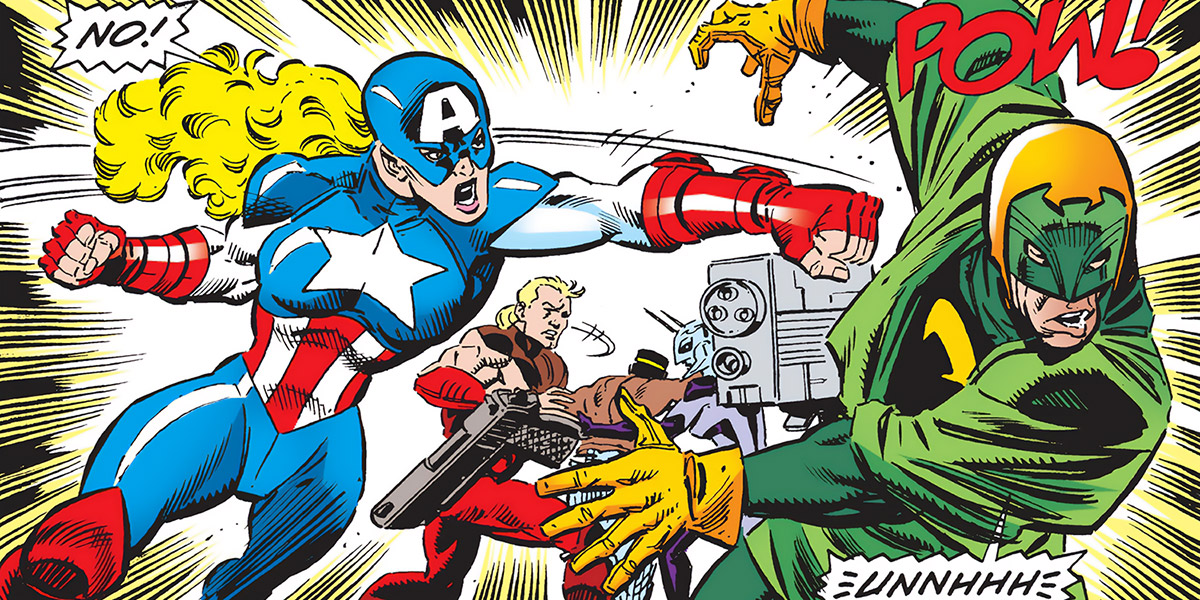 The Red Queen was mentally unstable. She had been pushed over the edge into insanity when the new Avengers, whom she deemed unfit to bear the name, reopened the portal to the alternate Doom’s Earth. This had re-exposed their planet to the threat of invasion that her father had given his life to stop.

Although she was at first joined by her brother Henry (aka Big Man) he eventually changed sides and fought to save the Avengers. They were finally rescued by Mainframe III leading a group of Avengers allies, including Argo, the Coal Tiger, Earth Sentry and Blacklight.

When Spider-Girl tried out to become a member of the Avengers, American Dream faced her in combat and was defeated. After besting all the other Avengers in single combat, Spider-Girl was beaten by Stinger III and made a reserve Avenger.

Weeks later, the Avengers were asked by Tony Stark to capture the hero known as the Buzz, thinking he was a thief and murderer. The Buzz was assisted by Spider-Girl and Raptor who thought he was innocent, plus Stinger III.

Stinger was acting as the voice of reason. They were close to reaching a non-violent resolution when Stark betrayed the Avengers for his own interests by having his robotic lackey fire on Stinger III from hiding and provoke a fight.

Stark then ordered the Avengers to withdraw and sent his LMD  agent in with a negator pack. That disabled the Stark Global technology in the Buzz’s battlesuit.

When Spider-Girl tried to go to the Avengers headquarters to explain her actions in defense of the Buzz, American Dream met her. They decided to go patrolling together while Stinger III read Stark the riot act. After American Dream recounted her origin to Spider-Girl, they ran into the retired hero Steel Spider, who was having a mid-life crisis.

A team of the Soldiers of the Serpent began engaging in ethnic cleansing nearby and the three heroes thwarted them, helping restore the Steel Spider’s confidence as a hero and a man.

Shannon is an attractive and athletic woman with long, straight, blonde hair. As American Dream she wears a protective suit based the one worn by Captain America. Her costume has 8 stun disks, two on each limb which can be thrown or launched from an arm-mounted launcher with great force.

She also carries the shield of the Captain America from an alternate Earth she visited.

In or out of costume, Shannon is cheery and determined. She is a firm believer in the precepts that America was founded on and is dedicated to doing her best to embody them.

“It’s over Serpent! You’ve lost ! Your cause is a sham, and you’re a disgrace to this country ! You preach hatred, claiming to represent true Americans but nothing could be further from the truth !”

“I, for one, am proud to help defend this country from monsters like you !”

“You may have scored a few lucky blows but you can’t possibly defeat us all !”

Shannon could have been inspired by any patriotic-themed hero from the Patriot, the Star-Spangled Kid, or Liberty Belle to Gravedigger or the AmeriCommando. This would lead to her being the curator of the JSA’s museum and training with Wildcat.

My favorite method of inserting MC2 characters into the DC Universe is to place Marvel’s Silver- and Modern-Ages in-between the Golden-Age and the condensed DC Modern-Age. It would start circa 1970 with the Fantastic Four’s historic flight and run until the late 1980s.

The Fantastic Four’s final, fatal battle with Hyperstorm and the Avenger’s disastrous but successful foray to an alternate Earth would have occurred in the early 1990’s at around the same time that Superman and Batman were making their first appearances.

Alternatively, the tremendous battles that forced the retirement of Spider-Man, Mr. Fantastic, Invisible Woman, Hawkeye, and Iron Man, and caused the death of several Avengers leading to that team’s eventual disbanding could have been part of the Crisis on Infinite Earths.