This profile is the second part of a series, which should be read in order. The three American Eagle takes, and thus the three writeups, go :

Eagle’s appearances during the 1990s are limited to a small serial in anthology series Marvel Comics Presents. But the take on the character is obviously different.

Amusingly, Eagle is still being drawn by Ron Wilson. All the stories are by John Figueroa (back then mostly known for Wolfpack), though the editors have significant difficulties spelling his family name.

During this era, the strength of the American Eagle is downplayed. If the material were reviewed in isolation, it would be easy to conclude he’s at most “Class 10”, or even “Class 1”.

His durability likewise seems flipped compared to the 1980s material. He apparently can be taken down (it’s not clear) by a normal person with a club, but could withstand multiple hits from 5.56mm bullets.

Perhaps he experienced some sort of complication with his super-strength and durability during the early 1990s. But that’s an unsupported No-Prize HypothesisA made-up explanation to plug a plot hole..

The Eagle once demonstrates an unclear psychic tracking ability. He used this to locate a superhuman killer with psionicPsionics are sci-fi style psychic powers. abilities.

Strongbow now has solid streetwise skills, which is certainly a change from the original concept.

His crossbow now occasionally fires as an entangling projectile.

My first idea association is activist John Trudell, who during the late 1980s and the 1990s was more active as an actor, poet and musician.

So let’s go with Rocking the res. Much of the video draws from the 1992 movie Thunderheart, which was influential in the perception of Native affairs in the US.

Mr. Trudell played in this movie. His character was obviously based on real-life Leonard Peltier  .

Beyond being a tribal rep, Jason Strongbow also came to work in an unclear capacity with the Navajo Tribal Police (since renamed the Navajo Nation Police  ).

(Though it’s the largest tribal police force in the US, the NNP doesn’t have deputies TMK. That said, it’s entirely possible for their relationship with Mr. Strongbow to be informal. He doesn’t state at any point that he has police prerogatives.)

Local young tough Jimmy Littlehawk attempted to rob a casino with two friends. There was a deadly shootout, and Littlehawk et al. fled.

The police correctly assumed that he’d go to his mother, who ran a grocery store in New York City. Since Jimmy was his cousin, American Eagle agreed to be their liaison with the NYPD.

However, the two NYPD detectives were cowboys, and the arrest turned ugly. Mr. Strongbow was forced to intervene. He prevented any deaths and aided in arresting Littlehawk and his buddies. 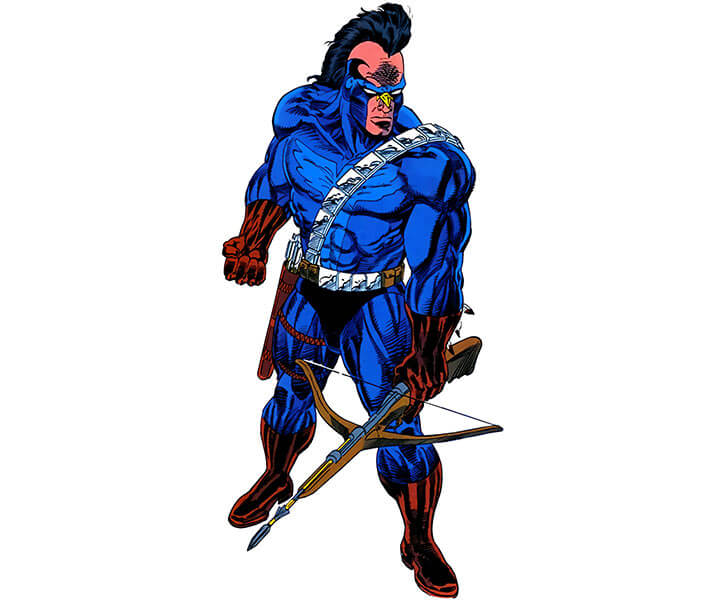 American Eagle then helped the FBI with tracking down a serial killer.

Though the Bureau didn’t realise this, the culprit was an insane mutant named Jonas, who had mind-control powers. Eagle used his enhanced senses to locate him.

The collaboration was an outreach effort on Strongbow’s part. Though the Bureau’s history with Native politiesGeneral term for an organised group (a tribe, a democracy, a theocracy…). (and especially civil rights activists like Strongbow) is disastrous, the Eagle was trying to establish a relationship with senior agents.

Eagle and Agent Dale Peck were successful, and arrested Jonas. It seems possible that Peck became a trusted inside contact.

A woman who had grown up on the res asked for help to recover her runaway son. She had discovered that little Tommy St. Clair’s stepfather was beating him. After expelling this man from her life, she enlisted the help of Jason Strongbow and a P.I. named Frank Ramirez.

The pair found Tommy. But he refused to come with them if they didn’t help his friends. A whole gaggle of runaways had been pressed into the service of drugs runner Alan “Sinner” Sinclair.

Strongbow was reluctant to get involved, since he had little relevant training. But he still raided Sinner’s warehouse, easily taking down the security.

However, it is unclear whether it was possible to properly process all the rescued runaways.

Somewhere in the Middle East, the American Eagle infiltrated a desert fortress. There was a rumour that US hostages were held therein.

It was actually a trap set for him by one John Marshall. Strongbow had previously derailed a real estate plan by Marshall to steal Native land, ruining him.

Now, the developer and two companies of mercenaries (bizarrely dressed in imitation of early XXth century French Foreign Legion outfits) had the drop on Jason.

The Eagle narrowly escaped from his cell, with Marshall and his forces in hot pursuit. He thus led them into a trap. Strongbow had been informed that Marshall was in-country, and had therefore assembled a force of his own from Interpol contacts, the local military and bounty hunters.

This forced Marshall and his troops to surrender. 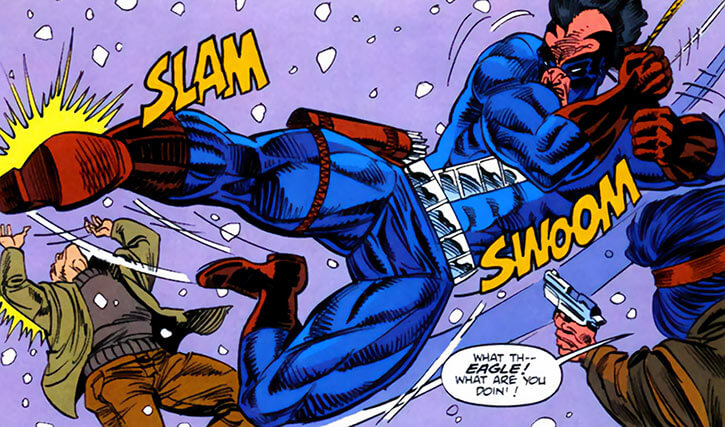 During this era, American Eagle’s costume is more subdued. It’s a dark blue one with dark red boots and gloves, and a white belt and bandoleer. There’s a stylised eagle emblem on the chest in lighter blue, though the contrast is kept low.

The top of the mask is now open, and he sports a tall Mohawk haircut. Historically it’s more of an Iroquois or Mohican hairstyle but heh, ain’t no reason why an Arizonan bloke wouldn’t like it.

This version of American Eagle is more of a pragmatic, grumpy, slightly burnt out action hero. The stories being but a few pages long, there isn’t room for much more characterisation.

As his sheer power seems diminished, he relies more on planning and isn’t a fan of having to improvise.

During the Figueroa stories, the world he lives is more that of late 1980s detective or action movies. He’s a superhuman with a costume, but the threats, atmosphere, attitudes and situations are more akin to thriller material.

Gadgetry is limited to bows, crossbows and arrow guns.

Scores lowered to reflect performance during these *specific* stories. As noted, we can imagine he experienced a Power Complication Subplot off-panel.

Eagle’s psychic tracking ability is unclear. It seems that it allows him to track something about evil and/or psionic power use.

But even he can’t define what he’s sensing – it’s closer to an intuition. And it only shows up once to expedite a short story.