He didn’t appear much, so we originally wrote him up as a single article. However, he also went through discrete stages of development. So upon further thought, three small profiles read better.

American Eagle reflects evolving views of how to portray Native characters in media. Which in turn reflects the scarcity of indigenous voices in US comics. Exceptions include David A. Robertson and Patti Laboucane-Benson.

Jason Strongbow described his powers as “strength, endurance, and senses sharpened to an acute degree”.

We can observe that :

Since he’s a Native American in a 1980s comic book, he’s by law a superb tracker and wilderness survival expert, with a highly developed intuition. That’s mandatory. 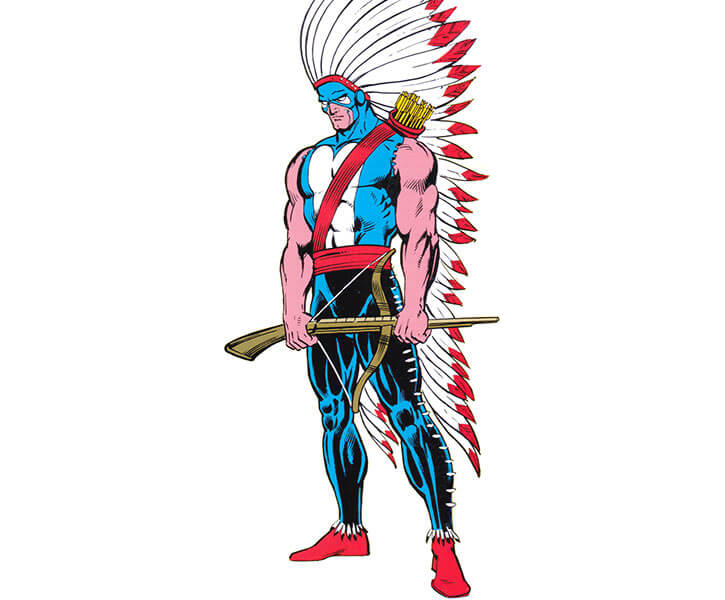 When he became the American Eagle, Strongbow acquired both a patriotic costume and a special crossbow. He mentioned that he “devised” both, which likely means that he’s a capable bowyer.

Observation leads to the conclusion that the crossbow is semi-automatic. Or at least has an action that can quickly be worked with one hand. It also has to have some sort of integral magazine. Strongbow often uses blunt, non-lethal bolts that look a bit like a lollipop.

The bolts can also trail a rope, and anchor it upon impact. The American Eagle can thus swing around a bit like Spider-Man. He’ll shoot a rope into a surface, swing from it, release another crossbow bolt with his free hand, repeat.

How the crossbow could possibly hold so many bolts and so much rope is unrevealed. Pym particles ?

One gets the impression that Mr. Strongbow has military experience – perhaps airborne infantry. However, nothing of the sort is actually mentioned.

(Though he states that he didn’t go to college whereas his brother did. This might be when he enlisted).

He also had enough money on hand to charter a private jet to fly over unexplored Arctic lands. It thus seems likely that he has ample savings from a previous phase of his life.

Off the top of my head, the most influential Native American musician is 1950s/60s Shawnee rocker Link Wray.

Mr. Wray’s groundbreaking use of the power chord and deliberate distortion inspired many 1960s/70s rockers (such as Iggy Pop or Pete Townshend), and paved the way for hard rock, metal and punk.

His biggest hit was “Rumble”, in 1958. This seminal instrumental was famously banned in some US cities for being too violent.

In the original story, Jason Strongbow belongs to an unspecified Native polityGeneral term for an organised group (a tribe, a democracy, a theocracy…) in “the Southwest”.

The Official Handbook of the Marvel Universe later clarified that he’s from the Navaho reservation in Arizona.

(“Navaho” is a less common but more correct spelling  of “Navajo”. As often with tribal names in North America, “Navajo” is an exonymA name given to a people by outsiders, as opposed to the way they call themselves.. The most common endonym for these folks is “Diné”. But in modern practice, officials use the word Navajo  .)

(As long as I’m doing parentheticals, the story specifically credits the American Eagle character to Ron Wilson  . Back then, Mr. Wilson was primarily known as the main artist on Marvel Two-in-One, and he indeed pencilled this story.)

In 1981, a mining company came to the reservation to cleave a mountain open. The legality of this was murky, and tribal response was split.

The tribal representatives were the Strongbow brothers, Jason and Ward. Jason was bitterly opposed to the intrusion, and accused Ward of having made a secret deal.

Though Ward hotly denied this, Jason’s suspicions were correct.

Having both brothers act as representatives was likely based on tradition. One local legend was about the two sons of a great chief, who both claimed leadership of their people. With his last words, their father had sent them on a vision quest to consult an unspecified spirit.

But even the spirit couldn’t decide who should be the leader. So he made both brothers into mighty giants. The two titans struggled, until one brother won. Now endowed with immense strength, this man became chief. He protected the people and the land.

Eventually, he vanished as the spirit recalled him. 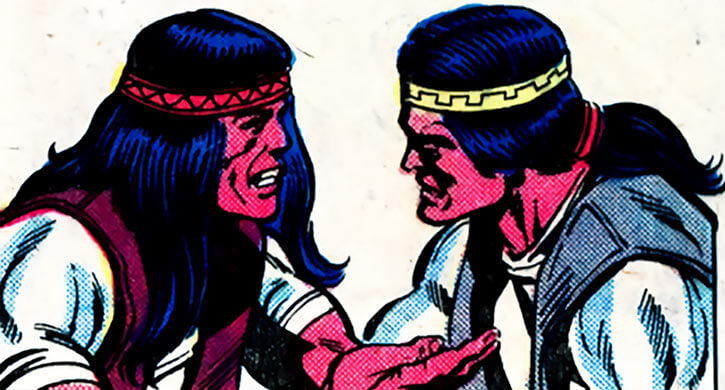 Jason’s legal recourses did not work out. Furthermore, a company watchman shot a protester dead.

To prevent a riot, Jason Strongbow ordered the activists back. Then he chased the murderer alone.

Strongbow thus discovered that the mine was actually a gleaming high-tech complex. It had all been a front set by sonic villain Ulysses Klaw.

The Strongbow brothers argued then fought there, accidentally triggering a fire.

As the blaze spread, Klaw came in. He stunned the Navaho brothers, and he and his men left with an unconscious Ward. The complex was demolished by an accidental explosion, burying Jason.

Jason eventually emerged from the rubble. He was now glowing and had an amplified physique. Though still dazed, he told his constituency that he would pursue the pillagers as far as needed.

The events were so reminiscent of the legend that there was controversy among the tribe about whether it was supernatural. As to Jason, he assumed that the combination of Klaw’s sonics, exploding experimental mining equipment and radiation from the ore are what gave him his powers.

The tribe sought to support Jason. A protester thus rushed to the Keewazi reservation to ask for Wyatt Wingfoot’s help. In turn, Wyatt enlisted his buddy the Thing (Ben Grimm) so they could catch up with Mr. Strongbow. 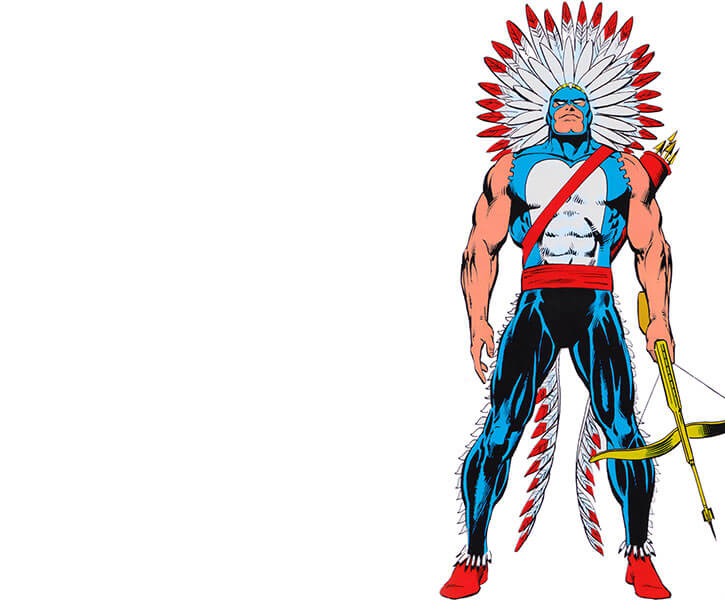 From desert to jungle

Strongbow had determined that Klaw and his accomplices were creating a beachhead in the Savage LandA hidden “land that time forgot” in the Marvel Universe., to mine vibraniumA Marvel Comics metal that controls vibrations. ore. He had chartered a small plane, then parachuted in.

But as he stalked Klaw’s contractors, he ran into local hero Ka-Zar. Ka-Zar, Lord of the Hidden Jungle !

After a brief clash, the two allied. They were then joined by Mr. Wingfoot and Mr. Grimm.

While attacking the mining camp, Jason realised that Ward had been working for Klaw all along. Furthermore, he had gained the same powers as his brother.

As the brothers fought again, Ward was accidentally shot dead by the same gunman who had opened fire back in Arizona. The murderer and his colleagues fled from Strongbow, but were killed in a dinosaur stampede.

A background hero is something to be

From there, Mr. Strongbow largely was in comic book limboWhen a character still exists, but hasn’t appeared in comics for years.. He was glimpsed in a few crowd scenes :

In 1989, he also appeared in an embarrassingly terrible short story. Let’s stick to noting that :

The American Eagle would return in 1993, but with significant evolutions. 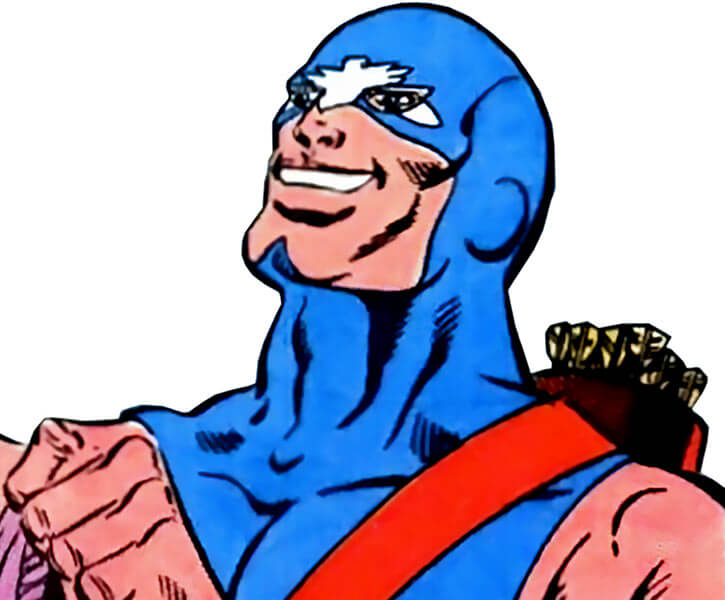 A serious, determined, responsible man. He’s on the grim side, but uncommonly articulate. Sometimes even sententious, as per the quotes.

At this point American Eagle sticks to the “Honourable And Good Native Wise Man Who Understands The Earth and Fate Too” vintage cliché. Look, it was the 1980s. The *early* 1980s.

He will often talk about nature, harmony, protecting the Earth from exploiters, building a better world, all that stuff. He even calls White people “white one” on occasion.

(Part of the difficulty here is that most Native philosophical discourses were pilfered for decades by New Age-ish marketing pitches. So even if you have some familiarity with the actual ideas, it’s right difficult not to sound like Goop ad copy. Since that’s what most people know.)

Jason is more of an isolationist. The problems on the res are hard enough to solve without having to deal with outside elements. Historically, the latter haven’t been exactly helpful.

Though several aspects of the character are of course dated, in-universe one could always blame youth. Decades later, Mr. Strongbow considered his 1980s costume with amused embarrassment. That he was a young man trying too hard to fit the role of what he imagined a great leader to be could provide some cover for the well-meaning but dated writing.

“If it is madness to strike down evil, White one… then let madness crush you into the earth you have defiled !”

“Land is land, all part of the same Earth which knows none of man’s false boundaries.”

“I am Jason Strongbow, now known as the American Eagle. I accept your offer of help and friendship… and extend to you mine.”

“If it is what a man does which determines his worth… then what you have done, my brother, earns you nothing but a position of dishonour and disgrace ! Above the clouds, our father must be hanging his head in shame ! And for that, I cannot allow you to continue the path of evil !”

It seems inevitable that he would be descended from the old West adventurer Strongbow. 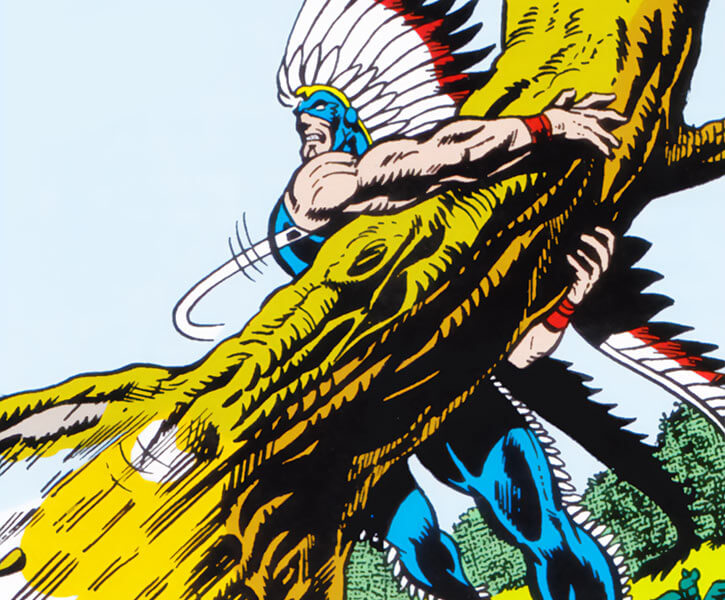 Ultra-vision is Night Vision only.

Gadgetry is limited to bows, crossbows and arrow guns.

Crossbow [BODY 04, Projectile weapon: 06, Bonus: Projectile Weapons can both trail a rope and serve as a piton].

The Vulnerability toward Slashing isn’t demonstrated, but likely. I suppose you could reduce it to 1 CS as a compromise.

Mr. Strongbow’s STR at this point could be a 15 or 16 – likely scores for Mr. Grimm in 1981. There’s one clear demonstration of this as they armwrestle. But generally we look for consistent patterns or, more realistically, a median estimate. Slightly lowballing his score also acknowledges to a small degree his impossibly low OHOTMU estimate.

Said estimate may stem from his fight against Ka-Zar. But American Eagle is clearly pulling his blows (EV 08 or so) since he can see that Ka-Zar isn’t superhuman durable.

The impression that he has military experience is too faint to be added to the stats.

Martial Artist doesn’t play much of a role at this point of A.E.’s Character Advancement.

No Ammo whatsoever for the crossbow. It’s a manifestly impossible, Silver AgeSuper-hero comics from the late 1950s to the early 1970s.-style, four-colourSomething goofy from over-the-top early comic books. weapon

In one story he mentions that his super-senses allow him to determine that semi-auto pistols held by opponents aren’t loaded. I have no idea of how that could possibly work. The magazines… smell lighter ? He can hear the absence of bullets ? So I left it out.