This profile only covers the first American Ninja movie (yes, it became a series). Oh, there are S P O I L E R S, but… meh.

His various powers represent the art of throwing, the art of arrow-cutting, and blind-fighting. He demonstrates the later by, hmm, fighting with a bucket on his head. Don’t ask. He also knows how to perform motorcycle stunts, because all cool ninja masters ride red sports bike over a hard rock soundtrack.

He’s pretty much impossible to hit with firearms, because… he’s a ninja !

Six years before the story begins, a teenager was found on a Pacific island by construction workers. The workers had been building a road through the jungle, and one of their explosive charges knocked out the youth and made him an amnesiac.

With no clue as to his past, the young man was sent to the United States. He was named “Joe Armstrong” and lived in a series of unsuccessful foster homes. At 16, he was sent to reform school for almost killing a man. He eventually got out, but got into trouble again and a judge gave him a choice between the Army and a prison.

Private Armstrong was transferred to the Philippines as a supply driver. However, within days of his arrival, his convoy was ambushed by a local guerilla. After a guerillero hit the daughter of the Colonel, who was accompanying the convoy, Armstrong beat up several attackers. The other drivers seized the occasion and joined in fighting back against their incompetent captors.

The American victory, however, was short-lived. Deadly, bouncing… NINJAS !! erupted from the forest and killed them all while Armstrong was busy rescuing Patricia — the colonel’s annoying but pretty daughter — from some swarthy guerillero.

The ninjas, commanded by by a ninja with a black star tattoo on his cheek, then chased Armstrong and Patricia through the jungle, but lost them.

The attack had been ordered by Ortega, a Philippines crimelord. He tasked the Black Star Ninja with killing Armstrong by any means necessary – and boy did he have means, as his property included a large training camp filled with multicoloured… NINJAS ! Ninjas in black, but also ninjas in red, in orange, in powder blue, in yellow, and hmmmm, that’s it.

Back at the base, Armstrong was already in trouble. The Colonel (secretly in league with Ortega) swore to have him court-martialed for his reckless actions and the dead soldiers. When he came back to the barracks, Armstrong discovered he was now reviled by his comrades.

In short order, Armstrong was confronted by the base badass – Corporal Jackson, who was incensed by reports that Armstrong’s heroics had cost the life of four soldiers. Jackson forced the very reluctant Armstrong to fight him in front of the other soldiers. After Armstrong thrashed Jackson, the Corporal decided he was OK after all for some reason, and all soldiers agreed.

Jackson attempted to convince his new best buddy to run martial arts demonstration with him to make money. Howbeit, amnesiac ninja are not interested in money. The Corporal then noticed that Armstrong and Patricia were falling in love, and convinced the Private that he would need money to take her on dates.

An evil, traitorous sergeant working for Ortega then sent Pvt. Armstrong into a trap – a warehouse filled with skulking… NINJAS ! He killed them all, then rode Jackson’s motorbike to chase his Army truck, which had been stolen during the fight. During the chase, many fruit stands were smashed by the truck – there’s a law about that.

Assuming that he had smashed Armstrong to bits, the evil and cruel Filipino truck thief drove to Ortega’s base/plantation. But of course, Armstrong wasn’t dead and had actually snuck aboard the truck because he’s totally… NINJA !

Once in Ortega’s base, Armstrong discovered that his stolen truck contained a shipment of missiles – but was soon spotted by an incompetent guard. The private escaped the dozens of guards firing at him, and stumbled on Ortega’s Japanese gardener. The Enigmatic Oriental™ told Joe that he knew him, and that their paths would soon cross again. 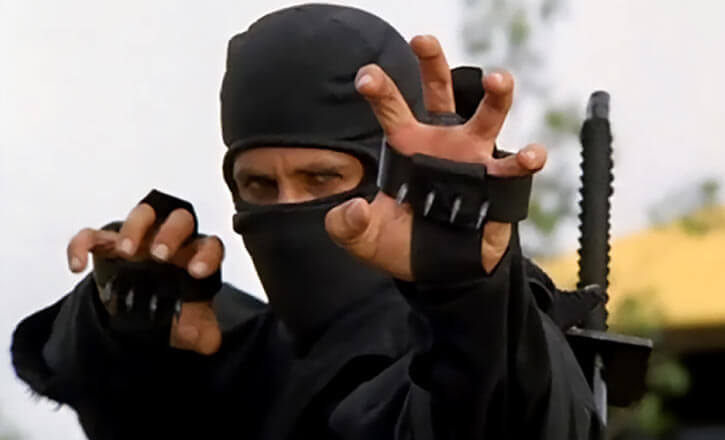 Jackson procured a Jeep to reach Ortega’s property before the stolen missiles would be used. Meanwhile Joe contacted Patricia, who convinced him to speak with her father, the colonel. However, the colonel tried to have Joe arrested instead.

Meanwhile, the colonel turned against Ortega, who in return had Patricia kidnapped by the Black Star Ninja.

Armstrong snuck into Ortega’s estate, where he again met the gardener. As they discussed Joe started recovering parts of his memory. The gardener was actually Shinyuki, a Japanese soldier and ninja master. For decades, Shinyuki had been unaware that the Second World War was over and continued to occupy a remote Pacific island.

When a freshly-orphaned White baby washed ashore, Shinyuki raised him in the way of the ninja and called him “Joe”, since it was the only American name he knew.

While Shinyuki was a good, Bushido-minded ninja and had raised Joe as one, the Black Star Ninja had broken the code (whatever that means). That made him Joe’s and Shinyuki’s mortal enemy.

Joe got out of Shinyuki’s place is full ninja garb and weaponry, and attacked the ninja camp. Ortega almost immediately played the hostage card, forcing Joe to let himself be surrounded by ninjas to save Patricia. Things were not looking good, but Shinyuki appeared beside Joe in a flash of smoke and, together, they fought off the ninja crowd.

However, as the fight was about to end, the Black Star Ninja killed Shinyuki. He knew the secrets of ninja teleportation and thus could predict where the aged master would reappear.

At that point, the US military, led by the hard-ramboing Jackson, attacked the Ortega plantation. Since they were using such unstoppable tactics as standing upright in a speeding Jeep while shooting a .45 handgun, they made quick progress – although the devilishly clever stratagem Ortega’s guards used (standing around and waiting to be shot) would have daunted lesser men.

Armstrong jumped aboard Ortega’s helicopter and, despite the crimelord’s interference, grabbed Patricia and bailed out.

Jackson then shot the (curiously small and immobile) helicopter with one of the stolen Stinger missiles.

Armstrong’s eyes often give him a sleepy, nonchalant air.

When Armstrong is attacked by… NINJAS ! and takes a sword from one, he will usually hold it in a reverse grip, since this look more ninja-like. When moving all ninja-like, he hugs walls like white hugs rice.

Armstrong is a brooding loner – he’d rather stand around playing with a balisong folding knife than interact with his fellow soldiers in even the most trivial away, unless ordered to by a superior. He rarely speaks.

Armstrong has a problem with people hitting women, and will react violently to such. He seems generally shy around women, unless the situation is particularly tense (such as, say, being chased by ninjas).

He prefers to act alone, so as not to risk the life of anybody else.

“Look, Jackson. I don’t want to fight, I don’t like crowds and I don’t need money.”

Sure. Worse, he could actually have been trained by Nitobe-san !

Bonuses and Limitations:
Evasion only works against firearms.

Equipment:
Armstrong pretty much never carries anything, not even a pistol. He’s just a truck driver. However, he keeps being attacked by… NINJAS! and will often take equipment from then, such as:

He, however, never uses the firearms dropped by his opponents, since that is not ninja enough.

* Without Defensive Roll
** Can be 13 vs. firearms

“Master of Ninjutsu” is an Array to model the vintage, cheap stunts work that requires each application of the Power to be staged and filmed in a specific manner.

Source of Character: I’ve only covered the first American Ninja movie here, for reasons of both time and good taste. Joe Armstrong is laconically played by Michael Dudikoff. 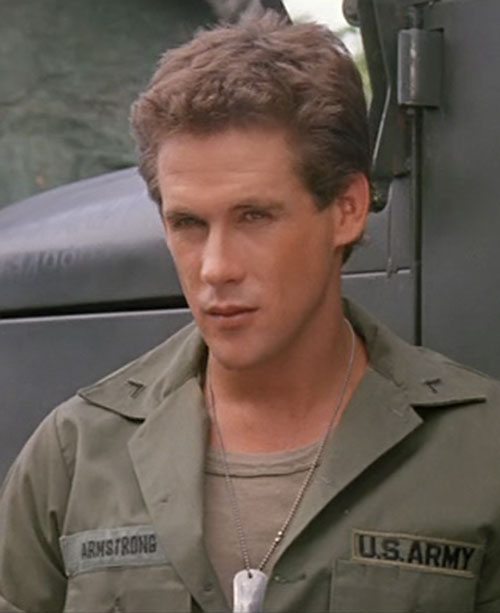 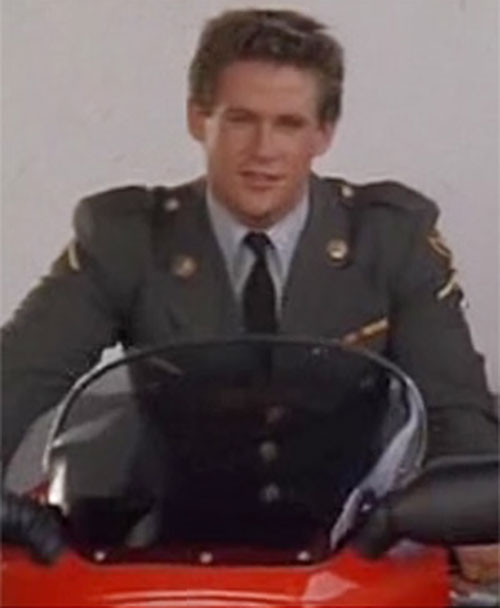 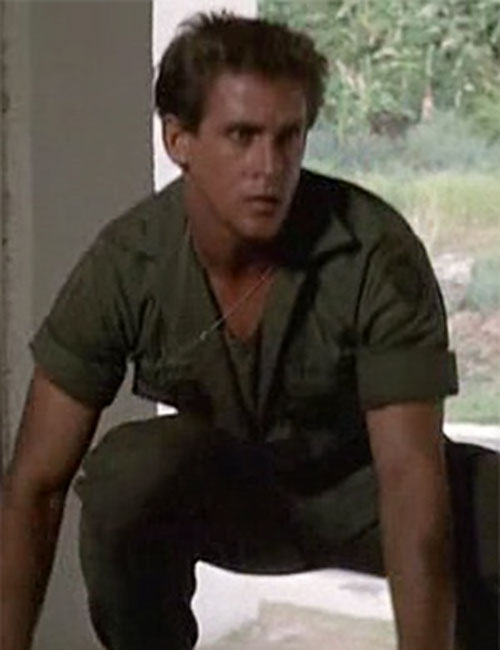 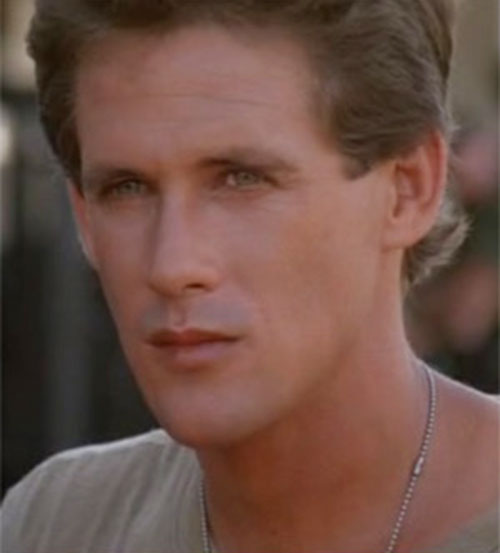 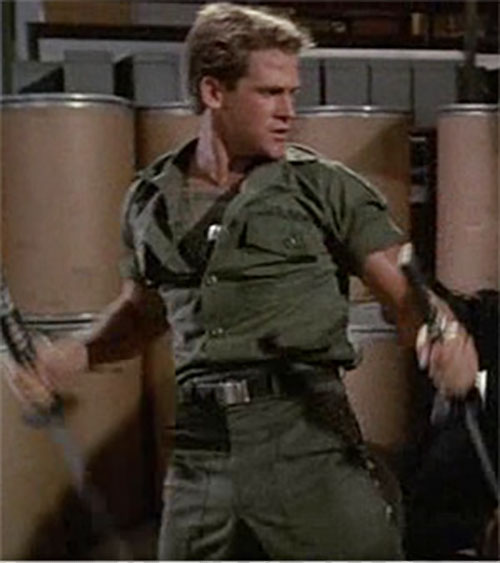 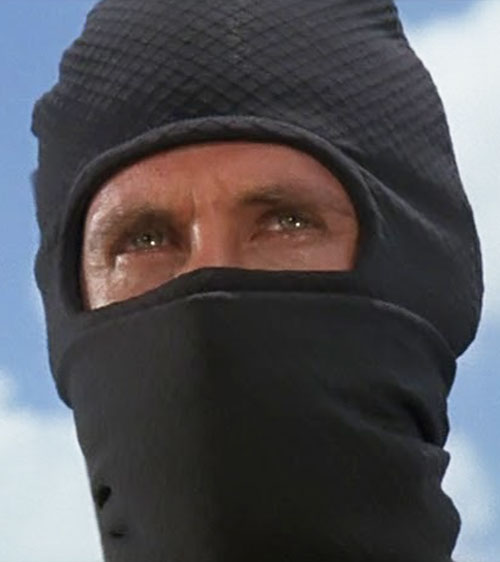 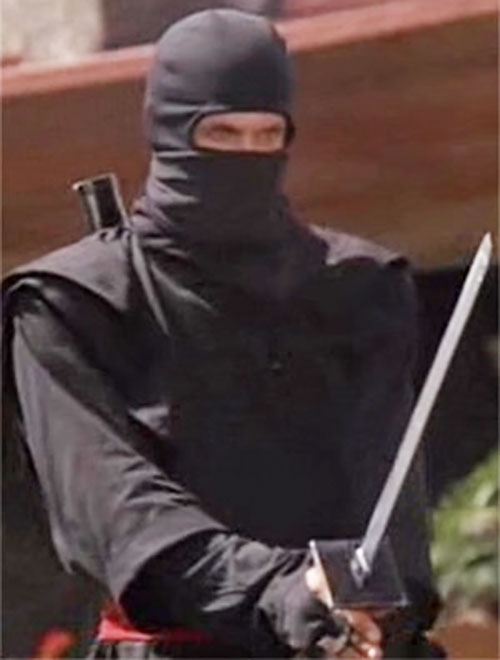 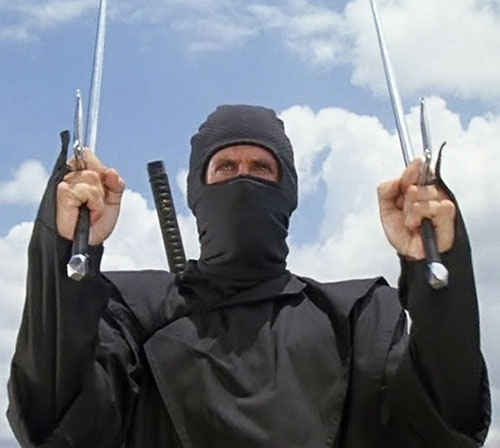 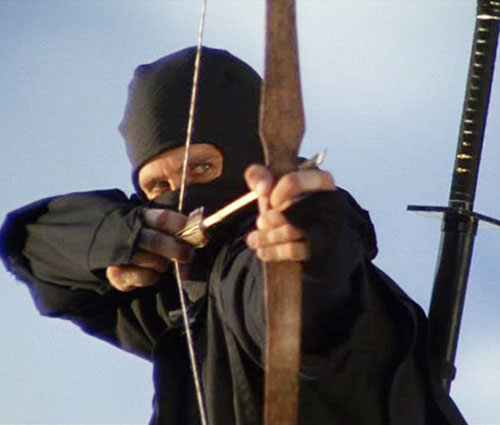