In addition to considerable superhuman strength and far higher agility than most would expect from a 335 lb. man, Roadkill possesses the ability to control existing electricity, up through and including that in the nervous systems of animals. He must touch any object he wishes to affect.

Roadkill was born in Lancaster, Pennsylvania. He was raised in the Amish  way of life.

By the time he was four years old, one thing was apparent; he was a very strange child. He was abnormally strong and displayed it regularly starting at about the time he could walk. The other members of the community were frightened of the superhuman toddler and expressed their concern to his family.

In response, his parents locked him away on their farm. They kept him hidden from their neighbors and only brought him out for barn raisings (which he could do almost singlehandedly by the time he was 8 years old).

When the young boy reached adulthood, his parents sent him out into the world. He was to determine if the Amish way of life was for him… and forbidden from coming back even if it was).

Without any education, social skills, or ability to communicate verbally (his comprehension skills are fine), he quickly fell in with a bad crowd. It was a gang led by young Philadelphia native “Dastardly” Danny Doring.

Doring provided the newly dubbed “Amish Roadkill” with his nickname and the only formal education he would ever have. They began a daring series of highway heists, robbing armored cars and anything else that might be carrying something of value. They even dabbled briefly in car-jackings.

Due to the absence of modern technology in Amish culture, Roadkill was almost 20 before he learned that he possessed a high degree of control over electrical current. He began using this to aid in the group’s thefts.

By the time he turned 21, Roadkill and Doring were equal partners in the venture. Neither had spent more than a night or two in jail on the occasional disorderly conduct charge.

When Doring’s fiancée, Angelica (aka “Miss Congeniality”), dumped him, the two went on a three-day drinking binge. During this time, “The Dastardly One and the Angry Amish Warrior” hatched a scheme to vent their anger.

Roadkill, still angry over his rejection by his family and the other people of the community, wanted some retribution. Doring, in his state of inebriation, suggested that they alter their robbery targets and begin holding up Amish people in their buggies.

The duo has continued the vendetta against the Amish even after they sobered up. That is despite the fact that in the past three months, it has netted them only $43.17 and a basket of eggs.

Roadkill is a huge man, normally wearing a slight variation on traditional Amish garb. He wears white shirts, black pants and suspenders, along with his black hat (and shaved head and long beard).

Roadkill’s limited vocabulary leaves a great deal open to interpretation. He is big, mean and intimidating, but none of that matters. Whether he’s angry, sad, excited, or aroused, the only thing he ever says is “Chickens !”

As to what he means by that (and the Serious Irrational Attraction that comes with it)……I leave that to the GM’s discretion.

Ummmmmmm… what are you looking at me for ? I’m at a loss with this one.

Bonuses and Limitations:
Electrical Control has No Range.

By Andrew Lee (from ECW wrestling). 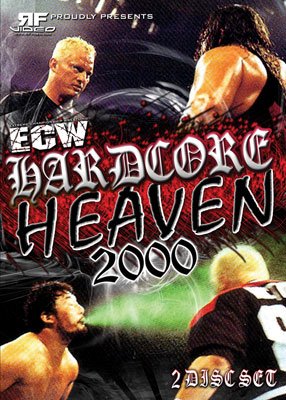 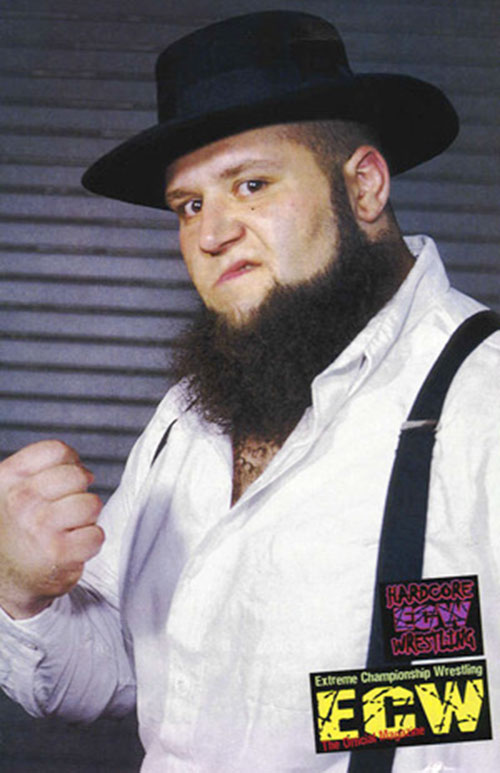 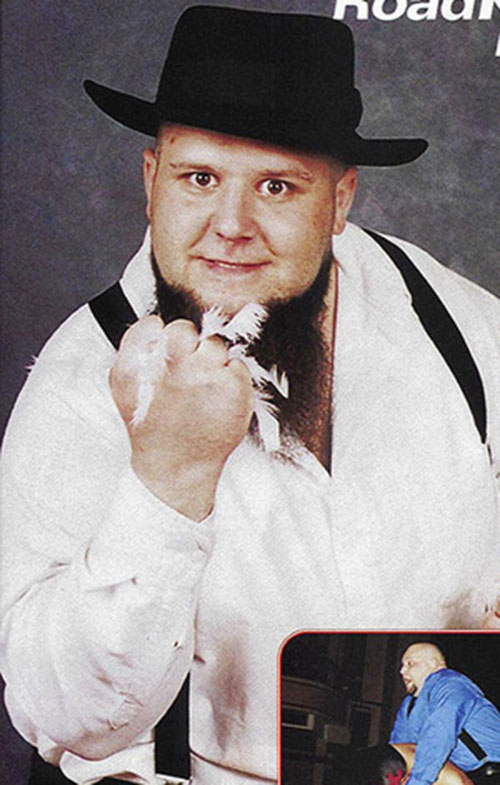