Ammo is intelligent, ruthless, charismatic, ambitious – and a military veteran. He’s an excellent hand-to-hand combatant, but couldn’t do anything against the vastly superior Daredevil (Matt Murdock).

Ammo, a washed out ’Nam vet, was first seen in 1988. That was when Apocalypse’s craft crashed over New York City, engendering a massive power failure.

A large chunk of the population was convinced that nuclear Armageddon had struck New York, and that it was the end of the world. Violent unrest ensued for a few days as a collective delusion and panic set in.

end of the world, baby

Seizing the occasion, Ammo turned a horde of rioters into his gang through speeches about true strength and survival. He then led them in a raid on an armoury and an hospital, pillaging weapons and drugs to set himself up as a post-apocalyptic warlord.

As the big blackout continued, Ammo secured his reign over two hundred heavily armed New Yorkers and an ample stash of drugs, fuel and ammunition. He also had his gang start welding armour plates to vans to turn them into urban assault vehicles. During this brief period, Ammo was considered the king of Manhattan.

This kingdom was lost to a counterstrike by Daredevil (Matthew Murdock), the Black Widow (Natalia Romanova) and several ’Nam veterans who wanted to restore order.

During this operation, Ammo wildly opened fire on the crowd from one of the armoured vans. Daredevil savagely mauled him in retaliation.

The apocalypse was postponed

Ammo himself was in prison, but was soon freed by Typhoid Mary.

Mary threw Ammo at Daredevil as part of a gauntlet that very nearly killed the red-clad vigilante. Once that was done Ammo remained at large, apparently associating with two other exceptional street fighters, the Wildboys.

Ammo has not been seen since.

A muscular Black man in his early 30’s. He sports a blond crewcut shaved into stripes on the sides.

He wears skintight white, zebra-stripped pants and matching “sleeves” on his forearms, along with a tactical vest, combat boots and some jewellery. It’s all very mid-1980s and Ammo would presumably dress differently were he to appear again.

He nearly always packs a gun and a baseball bat on his belt. His torso and shoulders are bare, and he wears a patch over his missing left eye.

Ammo usually had red war paint on his face. This motif was imitated by many in his gang during the short collapse of civilization in Manhattan.

Ammo is a hardcore, Hobbesian  survivalist. For him civilisation is a lie, and real power belongs to the strong. The weak can either follow or get killed. He enjoys violence and upholds reactionary politics. 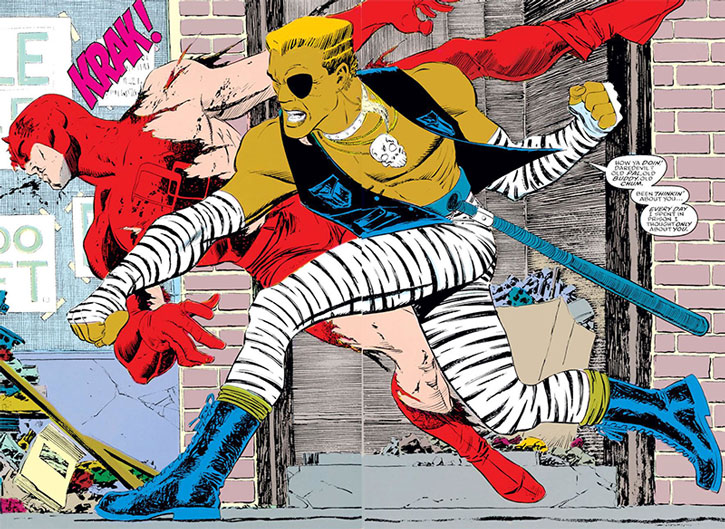 This 1988 story rested on late Cold War anxiety. Like many of his contemporaries, Ammo was convinced that the war would go nuclear sooner or later. However, he saw this as an opportunity, assuming that the real strong men and survivors would soon seize control of the ruins and rule humanity. In his view everyone else is just meat, and he absolutely doesn’t care about victims.

The war in Việt Nam was a foundational experience for Ammo, revealing him to himself as a true survivor and would-be warlord. This experience and the conclusions about life that he drew from it enabled him to command a large gang of drugged out, heavily armed barbarians during the perceived end of the world.

“The strongest men will win, will dominate, will rule. A world divided – between the victors and the victims. I am Ammo ! I am a victor ! Take your choice – join me or be my victim.”

“We’ve got problems. Those guys can’t trust each other so they’ve been sleeping with their eyes open, if at all… they’re exhausted, wired, they need drugs.”

“When I was a young punk like you… they threw me into ’Nam. A real war ! You hack it fast or you die.”

Bringing him to the quake in Gotham and having him become a major warlord in the No Man’s Land might work.

However, No Man’s Land was in 1999 so it loses the Cold War themes. And the Việt Nam invasion is nearly 25 years into the past at that point.

These might be replaced by other end-of-the-world themes — for instance perhaps that Ammo had genuine visions of the Kingdom Come timeline , its permanent superhuman crisis and Batman’s robotic reign over Gotham.

Or he could simply be set in the mid-to-late 1980s of Gotham, Star City, Hub City or any other suitable DC town as something that happened then. The story did not have elements resting upon Daredevil being the protagonist. 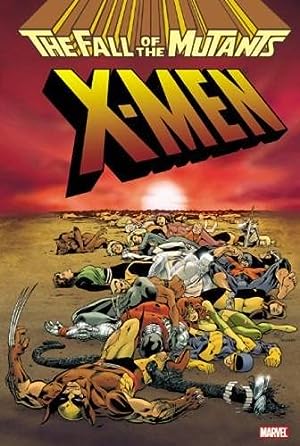 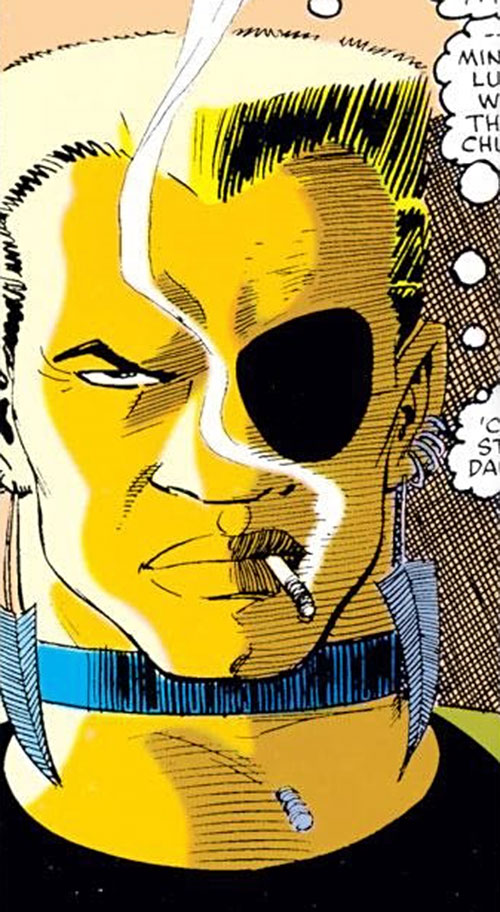 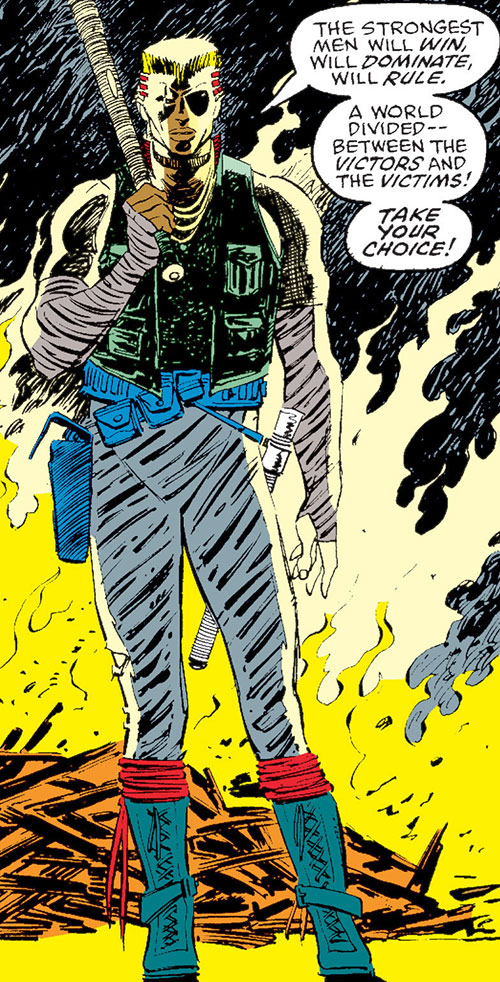