The Specials are the 6th or 7th greatest superhero team in the world. In other words, they are mocked, third-rate heroes. The world’s most prominent superhero team is the government-sponsored Crusaders. Other teams are the Annihilators, the Trio and Femme Five.

The Specials are meant for the oddballs, the rebels, the outcasts and the geeks. These insecure have always accepted the odd superheroes into their ranks. They battle threats on a level below what government-sponsored teams take any interest in.

The team has been active for more than 10 years. Mostly, they fight odd supervillains and natural disasters.

The team resides in the Specials HQ and all the members get a regular paycheck for their work. Very recently, toy figures of members of the Specials were made and sold by Tosgro Toys, meaning that they are finally getting some degree of acceptance from the general public.

They were heading for the Pentagon to stop invading giant ants the last time they were seen. Morale was pretty high then so they probably fixed that mission.

The members of the Specials, in the order they joined, are:

Amok has the uncanny ability to project powerful bolts of blue anti-matter.

While using his powers, he is surrounded by a blue field of anti-matter (an effect to which his clothes are immune). This field activates automatically if he is very excited or aroused, which makes him a potential health hazard to his surroundings and friends. It also makes sex and romance impossible.

His most useful skill is taunting friends and foes alike.

Little is known about the background of Amok. It is not known whether he gained his powers from an accident or if he was born with them. His radically different physiology has lead to very different eye, hair and skin pigmentation. In addition, these physiological differences grant him anti-matter projecting powers.

Bitter about the cards he was dealt in life, he joined up with the wrong bunch of people. He joined a supervillain team whose greatest crime was to spread scabies to the general populace.

The scheme failed due to the intervention of the world’s greatest superheroes, the Crusaders. Amok was jailed.

After serving his jail sentence, Amok tried to reform and joined the least discriminating and known superhero team, the team for misfits called the Specials. He still remains active as the groups most argumentative hero.

Amok is a very visible person in his 20s. He is reputed to be an anti-matter blasting badboy, although he is now a hero. He has blue skin, red eyes, white teeth and gray-green hair.

His stylish costume consists out of a red shirt, a fine black leather jacket, a pair of brown leather gloves and a pair of black trousers. All very visible colors.

He is probably phosphorescent as well…

Amok is, being a reformed supervillain, the odd man out in the Specials team. He has been through a number of unlucky breaks during his lifetime and, as a result, is mostly bitter and morose. It’s the classic case of being angry against the world. His unusual appearance doesn’t help things.

He won’t listen to origin stories or stories with a moral. Hearing about his unruly behavior or about the exploits of greater heroes doesn’t interest him much either. Rather, he fancies television shows, drinking, smoking, women, and reading Playboy magazines.

Actually, some of his bad attitude stems from sexual frustration. Given his powers, sex is an impossibility for him. He has a real one-track mind when it comes to sex. He would kill any woman he attempted to bed, although he still loves to talk about it. Considering that he, as a villain, tried to give people scabies, his problems might run deeper than mere fascination.

When things get tough, he thinks about going back to being a supervillain again… or starting another superhero group. His would-be plans, then, are always bizarre in nature and often relate to bizarre sexual crimes of some sort or other.

He maintains an offensive behavior or is rude towards people in general, and the Strobe in particular (a mutual feeling). He is very argumentative and uses a lot of sarcasm and sexually-related words in everyday speech. In the right company, however, he might loosen up and even be a good friend.

His greatest friend in the Specials, who he is often bickering with, is the team’s high-profile member, the Weevil. He is a friend of Power Chick and Mr. Smart as well. The rest of the team are neutral as far as he is concerned.

Also, he seems to retain no contact with his former partners in crime. He now stays in the Specials since no other high-ranking superhero team will accept former supervillains. Mainly, he would like to live a normal life, but will participate on the side of good since he is reformed and doesn’t fit anywhere else.

He certainly doesn’t want to join the Crusaders, if offered a position, since they jailed him in his youth. His only friends are within the Specials team. Paradoxically, he and his strong personality enjoys being in the center of attention, which is part of the reason why he remains a superhero (or supervillain). Of course, he also gets his paycheck from the Specials.

Although he won’t admit it to himself, he probably, at least subconsciously, likes the adventures he participates in.

“Those pants make you look like you don’t have any cock. Did I ever tell you that ?”

(Speculating about forming a new superhero group) “I got a name for the group… the Fuck-Kills. Our motto would be: ‘-You think you are bad ? Fuck You ! We’re gonna kill you!’… Fuck-Kills.”

There are a couple of third-rate hero teams in the DC Universe. Adding the Specials shouldn’t upset the balance. Amok could have a link to the Anti-Matter Universe or simply be the nephew of Major Force.

Source of Character: The Specials-movie . 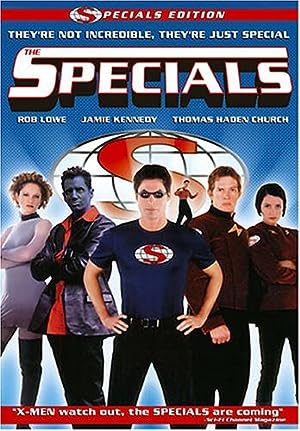 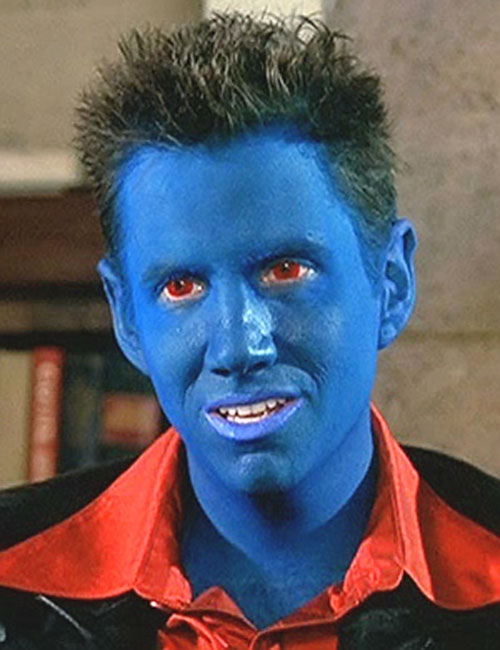 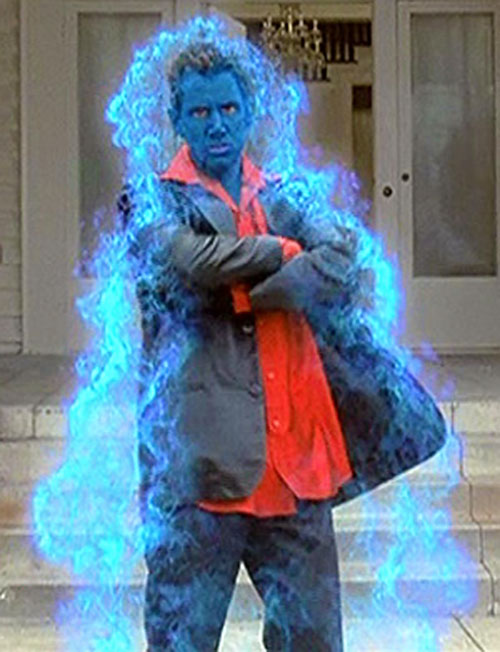