Though an early effort aimed at a hardcore public, it was remarkably successful and invented many MMORPG genre conventions. It paved the way for another landmark game, World of Warcraft, which drew liberally from Everquest but made it more accessible.

The feeling of immersion and the community around the game remained remarkable for several years, leading to some derision about how obsessed with the game its enthusiasts were. This writer played it heavily from 2000 to 2004, and retains fond memories  of it.

Amygdalans are very powerful and can be recast in a number of roles, so they occupy an interesting niche.

God of fear, god of terror

Cazic-Thule , the God of Terror, might be the greatest malign god on Norrath – fear is a major divine portfolio. A key part of Cazic’s worship is to appease him by terrorising others so he won’t come after you. Murder, torture, sacrifice, ruthless enslavement and other practices are thus common.

He is one of the Gods of the Second Pact. In the creation myth of Norrath, gods entered a series of pacts to create races to serve them and populate the world. The second wave of gods to conclude a pact with earth god Brell Serilis were the trickster god Fizzlethorpe Bristlebane (whose main servant race were halflings) and Cazic-Thule.

Most such races preferred to live in swamps. In the South of the continent of Antonica, the trolls dominated the Innothule Swamp (so named in honour of two of their gods, Innoruuk the Prince of Hate and Cazic-Thule the Lord of Terror). In nearby Feerroot, the lizardmen would build a mighty, sinister temple to Cazic Thule. This temple was not far from the main gate to Cazic’s Plane of Fear.

The serpentine Shissar are nearly forgotten by the peoples of Norrath, as their empire ended well in prehistory. On the continent of Kunark, the Iksars would rise to built a mighty empire that would eventually clash with the very dragons of the Ring of Scale.

Other Cazic-Thule servants from antiquity include the three gigantic golems Fright, Dread and Terror. These are but a part of the innumerable horrors on the Plane of Fear.

Two of Cazic-Thule’s children are lesser divinities on their own. His faithful daughter is Terris-Thule the Dream-Scorcher, ruler of the demi-plane of nightmares. His renegade son Morell-Thule is the Lord of Dreams, a benign and creative lesser god who opposes his sister.

And then there are the Amygdalans.

Amygdalans are giants, and even stronger and more resilient than their enormous frame suggests. Bathed in the power of the Plane of Fear and of horrific appearance, they exude supernatural fear that may cause even strong persons to break rank and flee. 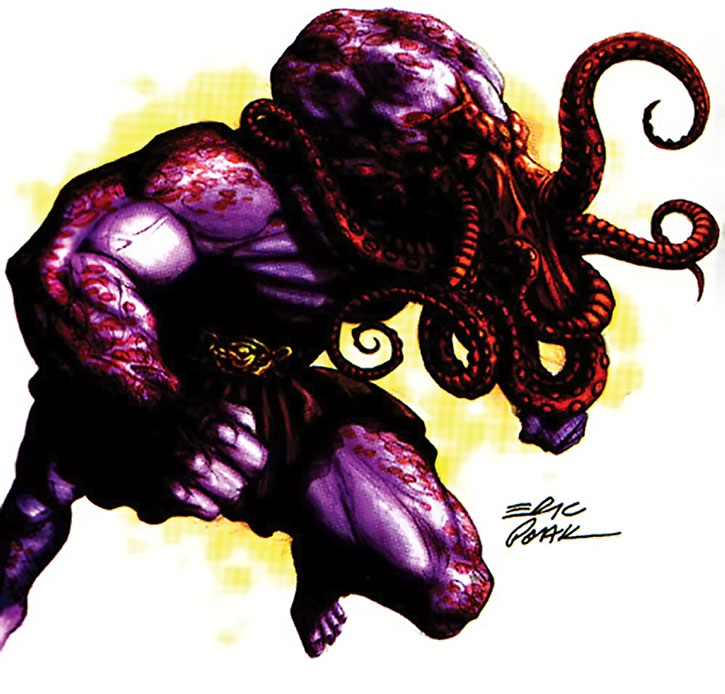 Most Amygdalans are divinely-infused warriors, well able to engage great mortal champions and kill them. A small group of Amygdalans might be able to shatter a low-tech army. Amygdalans further wield (and presumably build) a number of weapons adapted to their great size and strength – and can enchant them.

Individual Amygdalans can have additional abilities – often those of a shadow knight, bolstering combat techniques with necromantic arts. Such individuals may have much less powerful undead servants supporting them and be able to hurl curses, drain life or unleash the dreaded harm touch.

The latter a brutal onslaught of necromantic energy that is only possible once per day. In DC Heroes terms that’s roughly equivalent to Mental blast: 10 for such an Amygdalan, though with but a 1 AP Range, no casting time and no components.

Amygdalans (sometimes called “Thulians”) are the servants and shock troops of their creator Cazic Thule the Faceless, God of Fear. They have been chiefly encountered on Cazic Thule’s plane of existence, the Plane of Fear. They brutally oppose any invasion and slaughter most raiding parties.

They call their god the First Thought, since it was the first consciousness these psychic vampires were exposed to.

Amygdalans sometimes emerge from the Plane of Fear in small numbers to support the agenda of their master. On the world of Norrath, they are occasionally found in the Feerrott. This gloomy swamp holds deep in its recesses the main gate between Norrath and the Plane of Fear, and includes the gigantic temple to Cazic Thule build by Tæ Ew lizardmen ages ago.

On very rare occasions a few Amygdalans might be send to assist an especially potent priest of Cazic Thule, or accompany a champion or avatar.

The noun “Amygdalans” could be roughly translated as “those who feed upon the purest terror”. It is derived from the word “amyg”, the name used by Cazic-Thule cultists for the pure, divine force of terror inspired by their god. 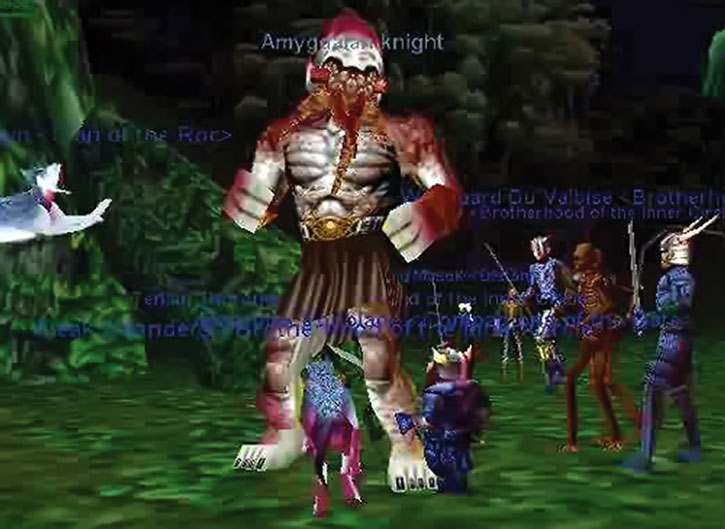 Amyg is very much like ambrosia  to the Amygdalans. It is divine, perfect sustenance that makes all other food sources pale in comparison. Amygdalans also hold the First Thought — Cazic-Thule — as the noblest god of them all. They dismiss all others as embodying lesser emotions from which the can only draw much less satisfying sustenance. Food is central to the Amygdalan mindset.

According to their myths, the Amygdalans have fallen from paradise. They were originally from a plane whose name translates as “the Source of Amyg” – presumably the Plane of Fear.

Once upon a time, the first 4 children of Cazic-Thule went to see their father with demands. The hateful father took his children in his hands and squashed them into a ball of pulp. He then then split the ball in two and continue to divide this matter over and over again until he was left with thousands of mini-gods – the Amygdalans.

Their places of exile were called the Dull World or the Dulling by the Amygdalans. For the terror they could feed on there was much less satisfying than real amyg.

In the Dulling, Amygdalans found more of Cazic’s lizardmen. Using them as slave labour and as a food source, they build a temple and city. This presumably was the Lost Temple of Cazic-Thule in the Feerrott.

They pooled their mystical might to create something called the Quintessence. This was the same sort of construct that later served as an avatar for the God of Terror. Cazic-Thule was pleased and let the Amygdalans return home.

This did not last, though.

The event that put an end to the Amygdalans’ return to the Source of Amyg was presumably the onslaught of the ogres of Norrath against the gods. The ogres could invade even the Plane of Fear, as they possessed the discipline to close their minds to terror. However, they were ultimately defeated and cursed by the gods.

In the wake of this war, Cazic-Thule struck back at mortals. He created a new Quintessence — a new avatar of terror — and sent it to the Feerrott along with the Amygdalans. The Amygdalans were to guard the avatar until it would be ready, while preying upon fear and lesser emotions in mortals.

However, they failed – their fearless enemies stormed the temple, wrecked it, and disrupted the avatar of fear.

According to one source, it was the Amygdalans who released the Green Mist, a magical weapon of mass destruction, in a last ditch attempt to protect the Quintessence. However, the Amygdalans hesitated, knowing that unleashing the Mist would greatly diminish their source of nourishment, and by the time they acted the Quintessence had been crippled.

The Amygdalans still living in the Dulling — the mortal world — are now the ones who know fear. They have been waiting for decades to see what sort of punishment their god would inflict for botching his revenge.

Amygdalans look like powerful humanoids with a muscular body and a sickly, very thin-looking (almost translucent) skin. Their head has variously been compared to an octopus or a nautilus (perhaps depending on subspecies or individuals).

There are large red-wine-coloured stains under their skins. These seem to move but are usually concentrated around the joints. Some individuals are almost entirely stained thus.

Even a very tall human will stand at about chest level to an average Amygdalan. There are even larger specimens, especially those chosen by their god to fulfil some special functions.

No communication has ever been established with Amygdalans, except by those divinely attuned to the presence of Cazic-Thule. Amygdalans are chiefly agents of fear and destruction, and they seek to feed off fear. They usually just wade in and expect the opposition to flee, but if that doesn’t happen they will regroup and start fighting in a tactically sound way.

See the FAQ for further discussion of scale for game stats in MMORPG. The Weltanschauung  – perhaps even the Vision™  – informing the power levels is that of a very early Everquest level – back when soloing was extremely hard, PC power levels low, the game pretty punishing, reaching level 50 was remarkable, etc.. 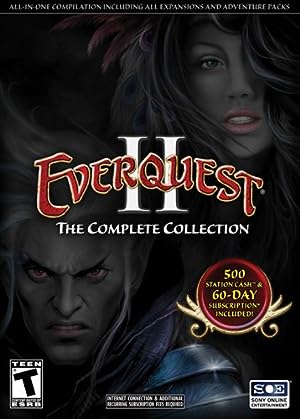 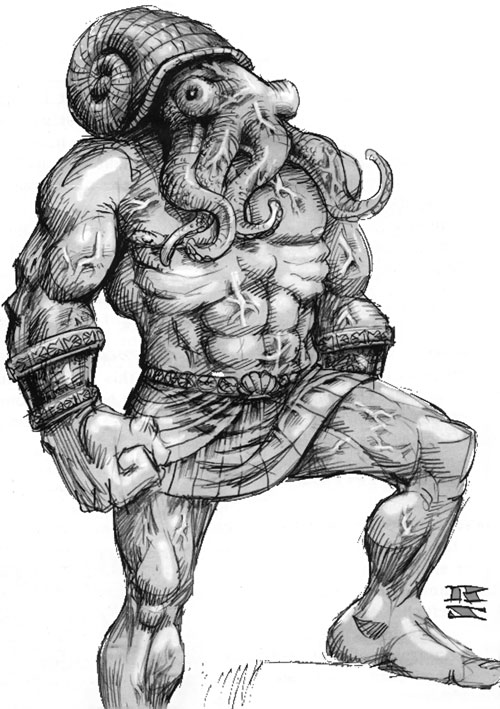 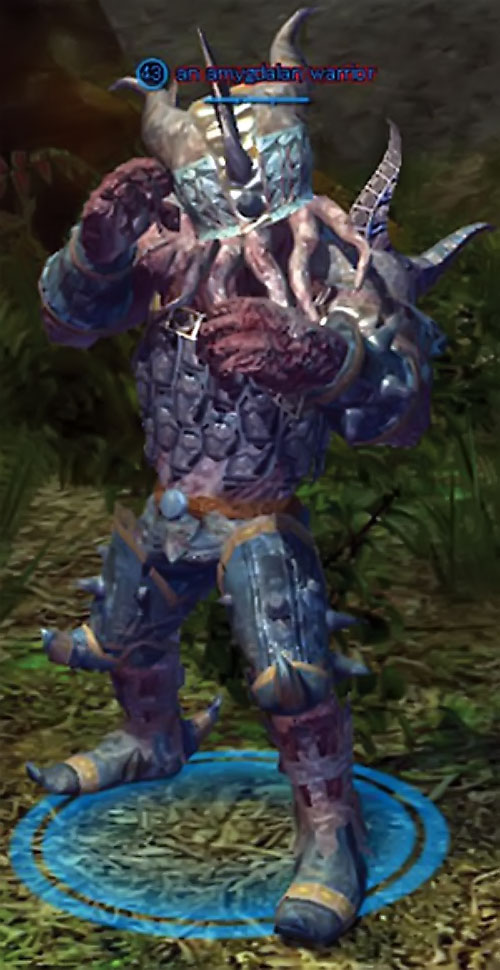 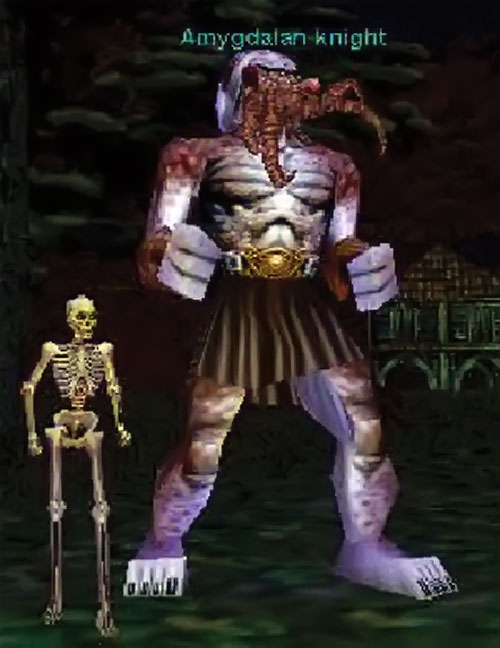