Anaconda is a classic superhuman enforcer in Marvel comics. She first appeared in 1980.

This profile should be read after :

This way Anaconda’s profile doesn’t have to rehash all this material.

She’s also courageous, and familiar with the American underworld.

On the other hand, she has little in the way of education or abstract intelligence. 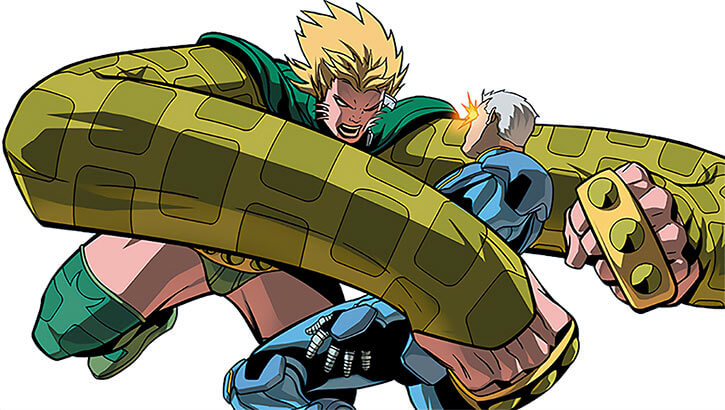 Enhanced to the gills

The right to snake arms

Anaconda’s limbs have been extensively modified :

Essentially, her limbs can turn into something akin to the body of a constrictor snake. Say, a boa.

However, if she’s knocked unconscious, Anaconda’s limbs will relax.

It was also electrically insulated. That allowed her to ignore even the discharges from Constrictor’s lashes/tentacles.

Anaconda is sometimes drawn with big brass knuckles. These somehow expand as her hands do. But these do not seem to significantly enhance the strength of her blows.

In some appearances, Anaconda is markedly less powerful. Usually, this version and her Serpent colleagues are defeated within a few panels.

One the other hand, during her very first appearance, Anaconda seemed nearly on par with the Thing (Benjamin J. Grimm).

She could efficiently wrestle him. And one of her blows sends Stingray (Walter Newell) flying for at least a hundred yards.

But this level of brawn was never again demonstrated.

Heh, perhaps she received gamma enhancements early on, but these had to be phased out to preserve her health. Or she had to receive regular exposures to maintain her strength, which stopped when she was in prison.

This or a similar No-Prize HypothesisA made-up explanation to plug a plot hole might also be used to explain her super-villain decayWhen villains gradually become less credible threats into “Jobberaconda”.

In this take she was originally “Class 75” thanks to gamma enhancements, fell to “Class 10” soon after the enhancements weren’t maintained, then slowly continued to lose her strength from there.

To the dismay of the rest of the Six Pack, Anaconda has a huge pile of show tune CDs she’s always listening to. Therefore, you’re soooo getting Julie Andrews.

Ms. Sitznski reportedly was a steel worker early on. Presumably in her native Pittsburgh.

One also gets the impression that she was an early adopter of strength training and body-building techniques. There was a wave of new techniques during the 1970s (such as aerobics  , or weight-resistance workout machines). These made it more convenient for women to build up fitness and muscle.

(If she was an even earlier adopter, a typical source of inspiration would have been the 1960-ish Hercules movies with Steve Reeves.)

She also had serious criminal connections, but there’s no background about that. Perhaps she was forced into a life of crime when the steel industry in Pittsburgh collapsed.

She then became a callisthenics  instructor at the Taskmaster’s Academy. Sitznski did physical conditioning for female students, including Rachel Leighton and Sheoke Sanada. One of her fellow instructors, for hand-to-hand combat, was Brock Rumlow.

(Back then, Taskmaster (Tony Masters) was operating secret schools. These trained elite henchmen for super-criminals such as Doctor Octopus. Or advanced organisations such as the Secret Empire.)

During her stay at the Academy, Leighton was viciously disciplined by Sitznski. In anger, Rachel kneed Blanche right in the face. Seeing this as a good show of character, Ms. Sitznski befriended her trainee.

From there, “Blondie” came to work for Roxxon. Using Brand Corporation scientists and equipment, they turned her into Anaconda for their Serpent Squad.

And from there, she became a founder of the Serpent Society.

During the Viper (Ophelia Sarkissian) coup, Sitznski unexpectedly betrayed Voelker – and even Leighton. But when Captain America attacked, Anaconda was defeated by D-Man (Dennis Dunphy).

Anaconda rejoined under the leadership of Cobra (Klaus Voorhees). During that span she seemed to be in a relationship with her colleague Puff Adder (Gordon Fraley).

Ms. Sitznski reconciled with Ms. Leighton and Black Mamba (Tanya Sealy). She thus helped them and Asp (“Cleo Nefertiti”), maintaining security whilst Leighton was on a date.

However, Blanche felt betrayed when she learned that Rachel was actually dating Captain America. She voted for her death during her Serpent trial. She also was on the team hounding Diamondback after she escaped during her execution.

Being in the field stalking Diamondback resulted in Anaconda, Rock Python (M’Gula) and Puff Adder being among the few Serpents who escaped arrest in 1990. 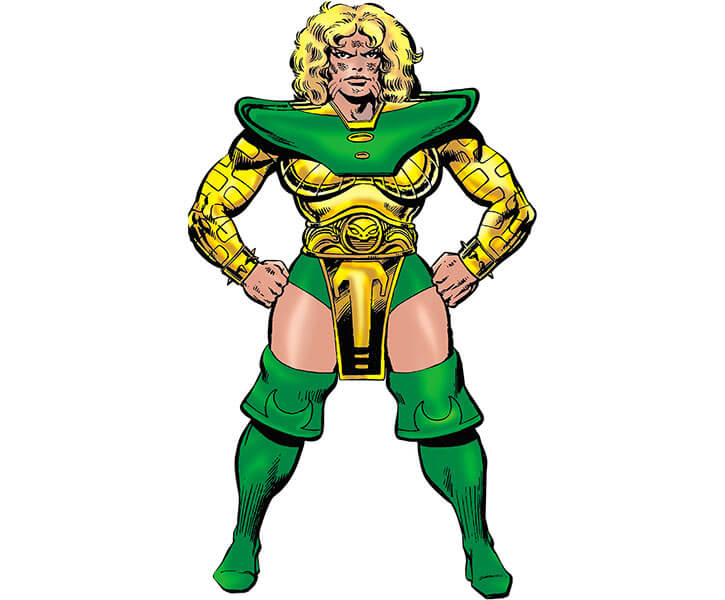 They attempted to get their revenge on Black Mamba and Asp, who had helped Cap against the Society. But their ambush was derailed when MODAM (Olinka Barankova) attacked.

MODAM kidnapped Anaconda, Mamba and Asp. However, the point was to “invite” them to a pitch about the Femizon concept, by Superia (Deidre Wentworth).

During these events, Anaconda :

In 2001, Anaconda was one of the fighters in a bloodsport tournament. She broke the neck of mutant Forearm (he got better) but was defeated when the Puma ripped out her throat (she got better).

In 2004, S.H.I.E.L.D. assembled a new version of the reputed Six Pack mercenary team.

Anaconda, Constrictor and Solo (James Bourne) were newcomers. But the rest — Domino (Neena Thurman), G.W. Bridge and Hammer (Eisenhower Canty) — were veterans from the previous version of the Pack, led by Cable (Nathan Summers).

Mr. Bridge led his team to counter Cable’s attempt at forcing world political unification. Things got rather complicated. The Pack alternated between fighting Cable, fighting along with Cable, fighting as a result of Cable’s actions, etc..

Several of the crises during this campaign pitted the Pack against enemies overwhelming them. Such as the Silver Surfer (Norin Radd), or Cable with his full psionic powers. Worse, Constrictor was eventually replaced by Deadpool.

By 2007, Anaconda had apparently returned to her usual scene. But she was defeated by the New Warriors (the depowered mutants version).

From there, she resumed operating with the Serpent Society. And, during the 2010s, Serpent Solutions. 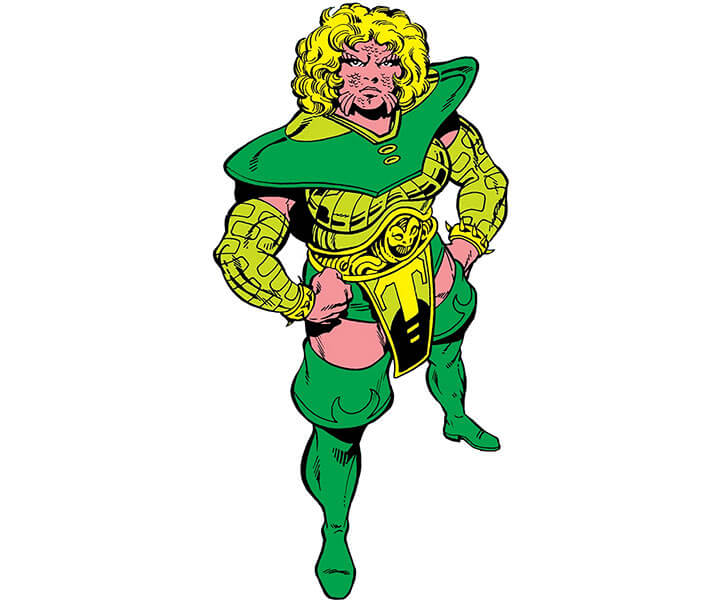 It is possible that circa 2010, Anaconda had a short career as a professional poker player.

In 2013, Anaconda was hired to join the Doom Maidens. These were a muscle squad working for Carolyne Le Fay.

Though the Maidens were defeated by the attacking Defenders, they still bought enough time for Le Fay to reestablish contact with her mother.

In the Taskmaster Academy flashback, Blanche’s hair is brown. This might be a colouring mistake, since “Blondie” seems to have been a lifelong nickname.

Anaconda is usually depicted as having an old-school Lower East Side blue-collar accent, much like the Thing. But she logically should have a 1960s working class YinzerAccents and turns of phrase found in the greater Pittsburgh area accent. Which would also help make her even more distinctive, n’at.

She’s sometimes drawn as even larger, chiefly in her Six Pack appearances. And the “Jobberaconda” appearances tend to have her smaller, maybe 5’11” and 190 lbs.

Likewise, she’s often drawn without scales over her skin. Since the Serpent Society seems to often use image inducers, perhaps it’s the case here. 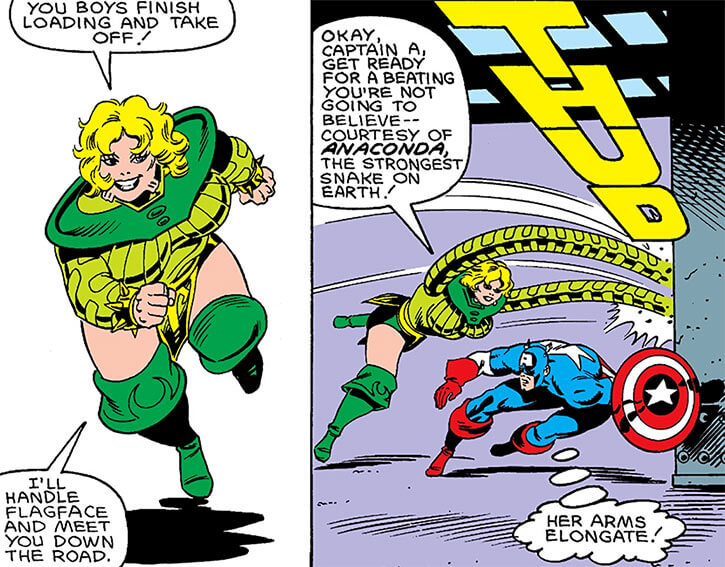 She comes across as a mix between a heel in US wrestling shows, and something of a bully. The latter is because she loves beating up lesser opponents ; she doesn’t really fold when she’s the one on the receiving end.

She’s a follower, and has no issue letting others handle the planning and other highbrow stuff she’s not good at.

Ms. Sitznski is a huge fan of Broadway musicals, particularly the older ones. She’s constantly listening to classic show tunes, such as Thoroughly Modern Millie.

Anaconda will always follow the biggest paycheque. Pay her one dollar more than the opposition, and she’ll switch sides. She is, in her way, a professional – and particularly businesslike when it comes to killing people.

Sitznski is used to being a big snake in a small pond. When she ends up against a heavyweight, she’ll likely be disoriented by their superior power. She may even forget to spend Hero Points  .

She seldom expects her opponents to outmuscle her, and is slow to adjust when facing unexpected tactics and powers.

Anaconda is gregarious, and likes having friends. She usually prefers fellow working class types, preferably with a criminal background. So she spends a fair amount of time in shady pubs and the like.

She’s wary about beautiful women, since she expects them to look down on her appearance. Though she struck a genuine friendship with Diamondback, Black Mamba and Asp, she (correctly) suspected that they badmouthed her behind her back.

Anaconda has short nicknames for everybody (such as calling Diamondback “Diamy”, Cobra “Cobey”, Superia “Supes”, etc.). When she can’t be bothered, all unknown men are “Harry” and all unknown women are “Mabel”. 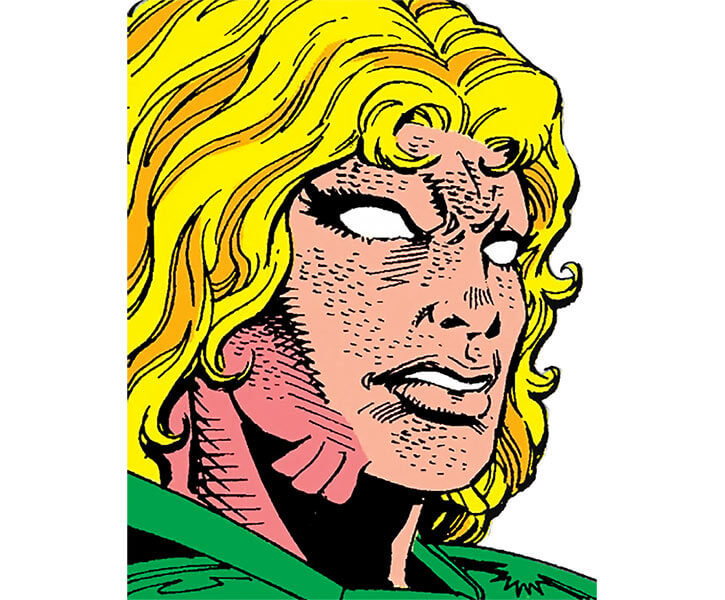 (Facing the Thing) “You’re all mine, brickman.”

“I spotted a McBurgers a block from here. Let’s chow.”

“Okay, Captain A., get ready for a beating you’re not going to believe — courtesy of Anaconda, the strongest snake on Earth !”

“Here, have a quarter to call an ambulance for the bum. I worked up a thirst. I’m going inside [that bar].”

“Step aside, runts — I’ll handle this… as usual. You go on ahead, make sure that the coast is clear — if that ain’t too much [for you] to handle.”

(Bringing MODOK’s corpse to A.I.M.) “Okay, you bucket-heads, we brought ya humpty-dumpty… so howzabout forkin’ over our dough ?”
Asp: “*Ahem*… Anaconda, why don’t I handle this ?”

“Math ain’t one a my specialities.”

“Who the bloody Hell are you jerks ?”

“Ain’tcha never seen a dame with scales before ?” 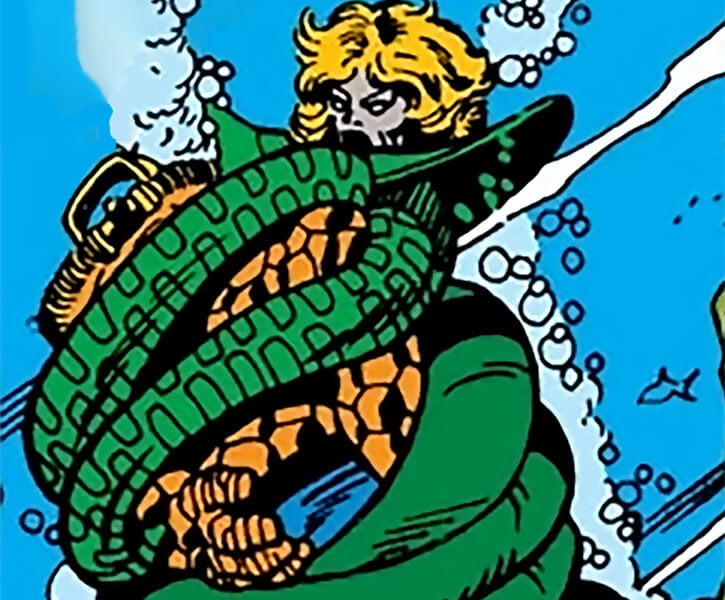 Loss Vulnerability (would presumably lose 2 APs in Accuracy and Martial Artist if she lost her Stretching). 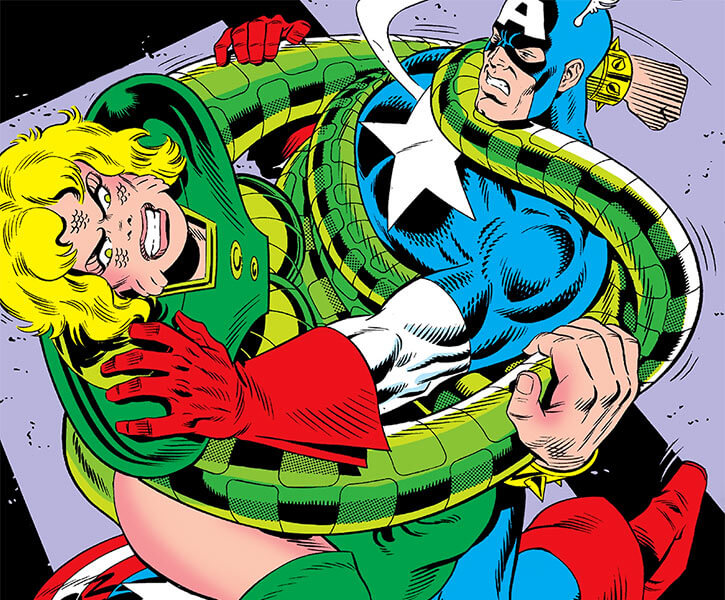 Technically, Ana should be written up as having STR 13, with a Power Loss diminishing that by 4 APs outside of Wrestling/Grappling applications. That’s cleaner.

But here, I went for a kludgy yet less confusing notation. That’s for the benefits of those who skim rather than read the stats. C’mon mate, of course we see you.

Regeneration and Swimming lowballed by one AP from secondary sources, since they’re never really seen in action.

She could have a separate Low Connection with the Six Pack — she gets invited to reunions — but the Mercenary Scene Connection covers that.

It is likely, but *not* demonstrated, that Anaconda has Skills often associated with graduates of the Taskmaster Academy.

Those might include Medicine (First aid): 02, Military science (Demolition): 03 and Weaponry (Firearms): 03. Plus a Familiarity with the types of technologies in use by super-villains and in super-bases.

Stats for those appearances where she’s just a jobberWrestling slang for a wrestler who almost always loses, and most of her assets have inexplicably vanished.

Power Reserve is Contingent Upon Stretching.

Loss Vulnerability (would presumably lose 2 APs in Accuracy and Martial Artist if she lost her Stretching).

During her very first appearance, it seemed that her STR was 14 or so, and her BODY presumably 10 or so.