Seamus Harper has limited combat abilities (but with some surprise acrobatic moves) and an immune system that sucks. But he is a true technological wizard and genius.

Most notably, he is a pioneering expert in the fields of:

Hailing from the Earth, he is also knowledgeable about the 21st century Earth culture and swing music (no doubt piping through his data port at times).

Harper apparently can repair external damage to the ship from the inside of it. All build bills, to Harper’s great delight, are sent to the New Commonwealth. Furthermore he has created amazing machines far beyond anyone else’s capacity, including:

“Dylan, meet Roseanne. Let’s just say you don’t want her to fall, because, man, she’s heavy. Maybe that’s not so polite… sorry, Rosie. Let’s just call her pretty plus. Rosie may look sweet, but she’s got a temper near three Nova Bombs cubed and an angry Vedran after he catches me with his daughter. Timing is everything. Fly low and slow, drop it down the centre and then get as far away as you can fast, because when Rosie blows the UNIVERSE knows.”

The galactic bomb, named Roseanne by Harper, is probably the most powerful bomb ever constructed. When Captain Hunt authorized the construction of a superweapon for utterly critical situations, Harper far extended the desired effect using unauthorized energy sources, technologies and ideas in its creation.

It was instrumental in blowing up a complete alien armada composed of thousands of warships, and also destroyed not only their dimensional rift, but also the military facilities and power generators on the other side of that rift. This permanently ended the alien threat. Having built one, he probably could construct another, but that was never demonstrated.

When he was 20, Harper was hired to by a Bobby Jensen to transport computers, which really were missiles. When Jensen’s girlfriend Beka Valentine discovered the illegal activities she left him and hired Harper as her Chief Engineering aboard her ship the Eureka Maru.

Thus, after having lived as a freedom fighter, oppressed and in great poverty, Harper eventually left the planet with the Maru, with his only living relative, Lahey, his cousin, left behind.

Harper adventured with the Maru and its mercenary crew (Beka Valentine & Trance Gemini) for several years. Said adventures resulted in being wanted for grand theft spacecraft, interstellar flight to avoid prosecution, prison break and public rudeness. Then they attempted to loot the Andromeda Ascendant which had been time-frozen at the event horizon of a black hole. 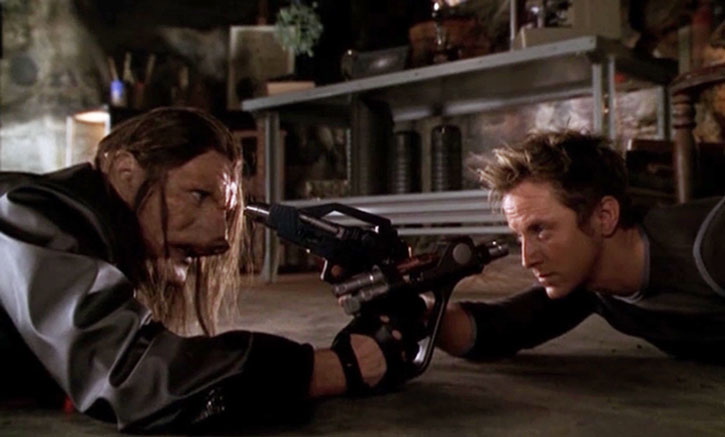 However, the only survivor of the Ascendant, Captain Dylan Hunt of the old, pre-fall Systems Commonwealth High Guard, instead hired them all, plus the Nietzchean Tyr Anasazi, as his new crew. This was in the year 303 After the Fall of the Commonwealth.

Harper quickly found his role as the Chief Engineer onboard the Andromeda. There he had access to superb laboratories, technologies, and discoveries, and also got to meet pretty space women. He joined in the mission to restore the fallen Systems Commonwealth, providing invaluable engineering and scientific expertise.

Rekindle the light of civilization

Harper faced his share of horrors and difficulties, including a traumatic Magog infestation that nearly killed him. While not particularly brave, his services were important enough to eventually award him a medal of bravery. He later received a Tri-galaxy medal with spiral cluster for saving the greatest minds in the three galaxies.

He continues to serve the Commonwealth (and a possible ending, a perfect future, is presented in the Dylan Hunt profile).

Harper looks like a slightly nerdy blond engineer trying too hard to be cool. He is clad in relaxed, vacation clothing. He is often seen carrying a tool belt, some gadget and/or a small gun.

He is sometimes surfing an air board in his leisure time.

Harper is a typical Earthling and Bostonian. He also has a mercenary streak who always cares for a quick buck. He always introduces himself as a super-genius (which he actually is).

While a smart guy he has poor people skills. He is rather cowardly and likes to nag, but if stressed out enough he may rise to the occasion. 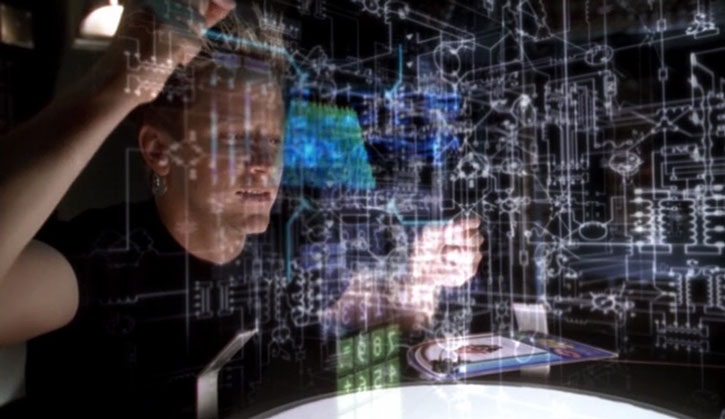 He is a true technophile, loving technological and scientific tasks. He thus can cram an incredible amount of work into little time. He sometimes has even made upgrades to people’s stuff and the ship itself without anyone knowing about it – surprise aces in the hole!

In combat he prefers small guns. While not a very good fighter, he involves some acrobatics in his moves. He will kill in self-defense only. His poor performance is saved by the fact that he does work very well under pressure, in both combat and non-combat situations. Seamus has saved the day on more than one occasion to everyone’s surprise, not least of all to his own.

Good ol‘ Earth is very important to him. He feels a great sadness about its current state as a post-apocalyptic wasteland and how low humanity itself has fallen. He listens to old swing music and regularly wears old Earth vacation shirts. This is his way of being a part of the Human culture, although he does not long back to the old wastelands.

He really loves exotic and attractive space women, although they generally don’t like him much. His cheesy one-liners tend to fail abjectly. He can, in fact, get exhuberant around such lovely space beauties, a fact often mocked and enjoyed by his fellow crew mates. His pursuit of exotic women has more than once led to new adventures for the entire crew.

Things improved slightly after he received a medal of bravery, which he always proudly displays on his shirt.

He actually had a brief romance with Satrina Leander, who was an Abyss agent. He eventually outsmarted her, saving multiple lives in so doing (including his own).

He trusts his new boss, Captain Hunt, to do what’s right. Their relationship is solid. Harper gets to impress the captain by building impossible machines, is willing to risk his life for him, and also complains about Hunt’s greater luck with the ladies.

Beka Valentine, his former boss, is like Harper’s older sister. They have experienced a lot of crazy stuff together and care deeply for one another. The epitome of his creations, Rommie, is not only an advanced android but a romantic interest of his, and he will help her any way he can.

While Harper knows all the nooks and crannies of her interior design, he fails to get positive responses with his flirting. As to Rev Bem, the Magog always made Harper uneasy as he had bad experiences with that race. Eventually, Harper would see that Rev was very different, but they remained pretty neutral through it all.

Harper has never, rightfully, trusted Nietzcheans. That goes double for Tyr Anasazi, the mercenary strongman and weapons expert onboard. Over time, however, the two of them found a strong friendship for each other, despite their many differences. This is a testimony to the relationships humans and Nietzcheans could have.

They have both risked their lives for the sake of the other, and although Tyr will not show feelings of camaraderie, they are true friends. Harper’s antics make Tyr laugh on the inside. The second Nietzchean, Telemachus Rhade, was also viewed with suspicion and over time the two would enjoy friendly bantering, to eventually turn into friends as well.

His best friend, however, is Trance Gemini. They often work together and their common light-heartedness and joking mood lifts up the crew. Harper will get very aggressive and even self-sacrificing if Trance is threatened. When Trance changed into her future self, their relationship at first became strained, but they later found each other again.

“We are going to find that machine. We are going to make sure nobody else dies because of it. And nothing is gonna stop us, not even the laws of temporal mechanics, comprende ?”

“Why, I must be the engineer because I’m the short guy with a sense of humor ? The dry wit, huh ? And because I’m so freakin’ amiable with a careless demeanor ? Is that it, huh ?” [he’s obviously just wearing a tool belt].

“The one where the plasma bursts are ricocheted off a nearby ship creating energy signature echos that fake out the enemy into thinking that they are a bunch of cloaked ships ? No, it’s strictly theoretical, that was an exercise.” [then does it anyway and saves the day].

[Encountering an alien woman holding his Captain hostage] “Oh, my God, you’re hot !! Harper, Seamus Harper !” [puts away his gun and advances towards her until Beka instead saves the day].

[Trying to impress the ladies] “Harper. Seamus Harper. Lieutenant Seamus Harper. Sometimes I double as the engineer.” [points to his chest] “It’s a medal for bravery.”

“All right. Eat some food. Bask in whatever adoration is going around. Marvel the masses with wickedly witted Harperisms. Even take on the Magog… mentally… from a distance. This I can do ! But homocidal brain thieves ? No, no, no, I’m way out of my element. This is Dylan’s job. This is Dylan’s turf. He’s the one that should be doing this. Where the hell is he ?!”

“So how about we lighten the mood, huh ? You look like you could use a joke. How do you get a one-armed Magog out of a tree ? Wave ! How can you tell a Nietzschean is lying ? His lips are moving ! What did the one Perseid [the blue aliens] say to the other ? Why the long face ? The other said back: I’m feeling a little blue… I’ll be back, don’t worry, I’ve got a million of ’em.”

“The target, which is linked directly to the electro-magnetic structure of Andromeda’s full body. It should effectively mask the ship, when it’s ready. Theoretically. However, if I haven’t calibrated the circuit safety oh so correctly, it could open a gigantic hole in the fabric of space-time depositing us in said hole bit by itsy freakin’ shredded bit by an installment method, which is why I said it’s not ready.”

[Observing a vast dimensional tunnel] “It would need to harvest all the energy from all the suns in the galaxy. Speaking as an experienced genius, people, that is some pretty advanced technology. It would have taken them more than ten thousand years to build something like that.”

“Ladies, take notes because the Harper has outdone himself yet again. What you’re about to see on this screen is the Protein Reader. Now, a Protein Reader interprets the emotional content biochemically encrypted on protein betaine . Normally we’d have to sift through a never-ending stream of tics and foibles to get to the good stuff, which you’ll see activate on this screen. I took Dylan’s DNA and and used it to build a synthetic version of his betaine, which through this machine jumps straight to the scenario that triggered the most emotionally intense response… and boom ! Brilliant hypothetical result ! Allow me to demonstrate a non-hypothetical result.” [takes a sample of his own DNA, injects it into the machine and his gruesome experiences with being eaten by the Magog show, and Harper jumps in fear watching it][faintly but happily] “It’s working.”

In another universe, Harper took a break from mere engineering and doubled as a pilot, calling himself Wash, on a ship named the Serenity, a Firefly Class transport ship! 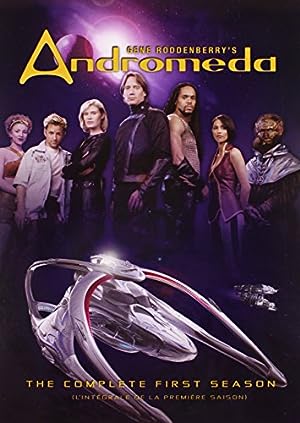 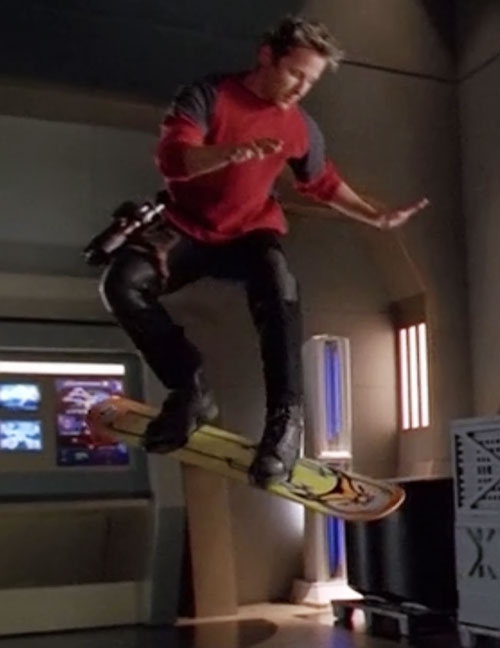 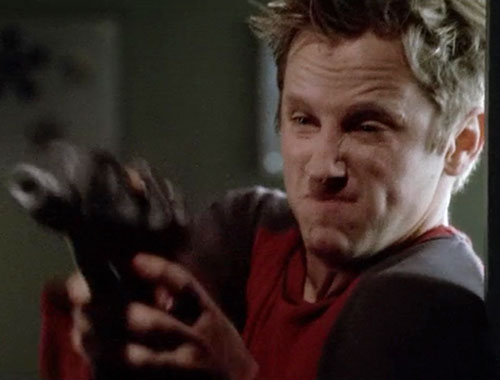 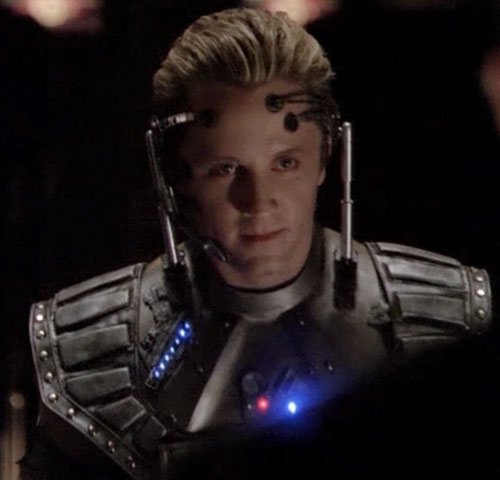