Andromeda possesses the powers and abilities of all Daxamites away from their red sun. She is extremely strong and tough, her reflexes and speed are super-human, and she can fly under her own power.

Her senses are so refined she can :

Laurel Gand grew up on Daxam. She is from a village run by the White Triangle, a cult devoted to racial separation and purity. She was more than a little horrified, therefore, to find herself drafted by her government to join the Legion of Super-Heroes, the United Planets’ living symbol of racial co-existence and harmony.

The Legion was happy enough to have a member with super-speed, super-strength, laser vision, x-ray vision, super-senses, and invulnerability to everything but lead. Laurel, code-named Andromeda, was less pleased to have to deal with members of “lesser races,”. She was thankful for the fact that the transsuit that protected her from lead poisoning protected her from the other Legionnaires’ touch.

She got very lonely. The only thing that prevented her from leaving the Legion was the fact that she’d have to return to Daxam if she did.

Slowly but surely, her attitude changed. For instance, some White Triangle-affiliated thugs that she had kept free of imprisonment used their freedom to beat up her teammate Triad. Laurel then decided, with some guilty prodding from Shrinking Violet, to track them down and take them in. They, though, had other plans, and poisoned her with lead.

A sickbed conversation with Brainiac 5 and his subsequent curing of her condition convinced her that individuals of all races should be treated equally. But her White Triangle ties were discovered soon afterwards. This earned her the suspicion of her teammates and made her long for home once again.

Playing on these vulnerable feelings, Roxxas, the White Triangle’s leader, tricked her into handing the cure for lead poisoning over to him. When she realized how she had been used, she entered the fight between the Legion and the White Triangle, taking on Roxxas himself.

The two of them got caught inside a fusion reactor, and the nuclear flames shooting out of the reactor convinced witness Shrinking Violet that she was dead.

The world has mourned her as a heroine who atoned for her mistakes, but she had actually survived the blast. She turned herself in voluntarily to the President of the United Planets. Laurel then went to live alone on the abandoned prison Planet Hell in an act of self-punishment. This was only known to the President and Cosmic Boy.

However, Cosmic Boy later decided to send Live Wire to free her from there. He wanted her to become part of an undercover rescue squad for the Legion. After fellow squad member Jan Arrah offered her forgiveness on behalf of his dead race, she agreed to join. With the squad, she helped save the active Legion from the Fatal Five.

Once R.J. Brande assumed the presidency of the UP, she was officially pardoned. Her status as both living person and Legionnaire was reinstated. But she declined to rejoin the Legion, feeling guilty and out of place. She instead joined the religious order called the Sisters of the Eternal Cosmos, where she has found fulfillment helping people in trouble, including M’Onel once.

As part of her penance, Sister Andromeda was told to explore the empty space between galaxies. During this exploration she discovered an odd phenomenon which she referred to as “Fires of Creation,”. Soon afterwards, an image of her appeared at Legion headquarters saying that the force she had just discovered was calling for M’Onel. The curious Legionnaire followed.

Exactly what this force is and how it has changed her is still uncertain. But when she and the other Legionnaires were unexpectedly pulled from the anomaly by Evolvo’s Omniscanner machine, she was shorter and she complained of having been robbed of an enlightenment or transformation that she had been expecting.

Andromeda is a very attractive, tall, blonde woman, with long hair. Her robes are white and red, with a white hood she often wears.

Andromeda originally was a very outspoken, xenophobic Daxamite. She preferred to spend her time alone, away from her teammates. Though she did not agree with all of the White Triangle’s methods or views, she helped them out of both a sense of duty to Daxamites and a fear of Roxxas.

After she was freed of imprisonment on Planet Hell, Andromeda has taken on a great guilt over her involvement. She joined the Sisters of the Eternal Cosmos and spends all of her time atoning for her actions, both in deed and word.

Before Legionnaires Annual 2, Andromeda did not have the Connection to the Sisters of the Eternal Cosmos nor Guilt. She had Dark Secret (White Triangle Member), Serious Rage, her MIF (Non-Daxamites) was Catastrophic and was -1 to Will and Spirit each.

Before she received Brainiac 5’s serum, she had MIF (Lead Poisoning). 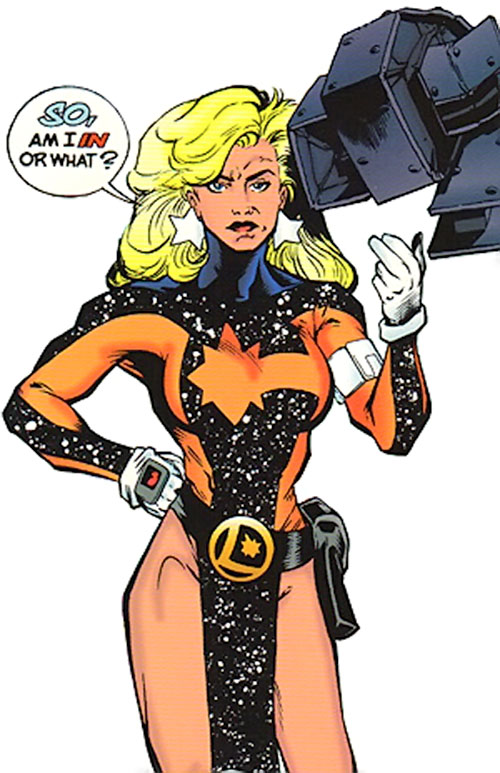 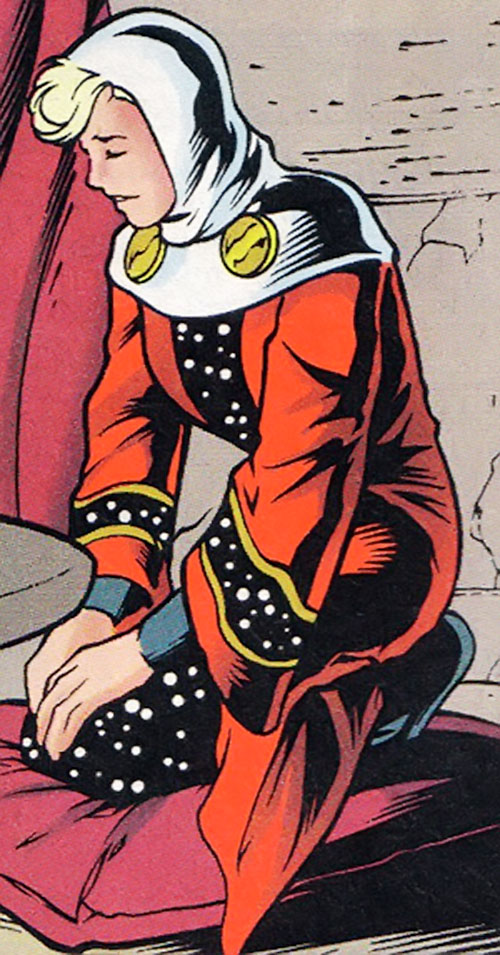