Angstrom Levy has the unusual ability to open gateways into other dimensions . His gates range in size from 2.5 to 8 feet in diameter. Levy can move himself or other organic and inorganic matter, appearing instantaneously on the opposite side in the other parallel universe.

Initially, he was limited to moving through dimensions experimentally. He used trial and error to find dimensions that were safe enough for him to move through.

Moreover, he was unable to teleport from one spot to another, circumventing the distance between two locations. He continued to occupy the same spatial position regardless of the dimension that he transported to. There he would have to travel to the location he was attempting to reach either prior to or after his teleportation from one alternate universe to another.

However, as a result of his experiment conducted with the aid of the Mauler twins, he has increased his brain mass by over 80%, granting him vast intellectual prowess. With this he has gained the memories of his dimensional duplicates from over 1,000 dimensions.

This union of parallel selves has given him intimate knowledge of those dimensions. Furthermore, he now has the ability to open gates at will to different locations in each one.

After his initial accident, Angstrom had his body physically repaired and enhanced by doctors from a duplicate dimension. His goal was to gain the capability to physically best Invincible. As a result Levy gained a degree of superhuman strength (about “Class 25”) and resilience to damage.

Furthermore, Angstrom is extremely hard to kill. His enhanced physique has taken vast amounts of physical punishment without resulting in his death.

Angstrom Levy was a brilliant but amoral scientist. He also possessed the ability to shift matter from one parallel universe to another. Little is know of the origin of Levy’s strange powers or about the man himself.

Levy could shift between the Earth of his own dimension and other Earths in the multiverse. Some were very similar to the Earth Levy was familiar with. Others were radically different, often dangerous. Without specific knowledge of the myriad dimensions he could visit, shifting was a hazardous and unpredictable undertaking.

Let’s get to work

Levy set out to solve that problem. Each dimension had its own Angstrom Levy, but he was the only one who had the ability to shift. Using his powers, Levy tracked down and recruited countless of his counterparts to his cause, through persuasion and other means.

Next he snatched the criminal genius Mauler Twins out of prison. He wanted them to construct devices that could download the knowledge of Levy’s other dimensional selves into his brain. At long last, he would be able to use his powers to their full potential.

With the help of an army of their own doppelgängers, the Mauler twins created a series of memory transference machines. These were hidden in safe houses across a number of dimensions. The Levy doppelgängers were placed in the machine and the download began…

But things went wrong. As the linked memory transference machines downloaded their data directly into Levy’s brain, the hero Invincible burst through the safe house wall. Levy summoned a squad of Mauler clones to keep Invincible from interfering with the transfer process.

The Maulers savagely beat Invincible. Levy, concerned that the mob of Maulers would kill Invincible, attempted to disconnect himself from the machine in order to stop them. In doing so, Levy overloaded the machine. That triggered a massive explosion that destroyed the safe house.

Levy survived the blast, but with serious internal injuries. Still, the process was a success. Angstrom now possessed intimate knowledge of thousands of alternate dimensions. However, Levy had been horribly mutated. Visible brain tissue now covered Levy’s head and shoulders with a fleshy mass of cerebral folds and ridges.

The accident affected Levy in other ways as well. He had a distorted memory of the events leading up to the accident. The researcher now blamed Invincible for causing the explosion that disfigured him. His personality was dramatically altered as well. Levy had been transfigured from an easy going yet morally challenged person into a violent psychopath.

Vowing revenge on Invincible, the wounded Levy retreated to a dimension with advanced medical technology that could treat his injuries. Over the next several months, Angstrom plotted and prepared for his revenge against Invincible. When his body had been rebuilt and upgraded, he struck.

Taking Invincible’s mother and younger brother hostage, Levy lured the hero into an interdimensional trap. He ran Invincible through a gauntlet of alternate realities (including the Marvel and DC realities) that were designed to weaken and injure him. Levy planned to then personally kill his weakened foe with his rebuilt, superhumanly powerful body.

Invincible survived countless hazards until he was finally attacked by the enhanced Angstrom Levy in a post apocalyptic dimension.

Angstrom got his wish. He battled Invincible to a stand still until he enraged the young Viltrumite. Angstrom realized his error at this point. His enhancements were based on the power levels he previously encountered Invincible at. By this point, Invincible had gotten stronger, much stronger. The now berserk Invincible savagely beat Levy, ravaging his newly enhanced body.

When Invincible finally regained his wits, he assumed that he had beaten Levy to death. This was a valid assumption considering the amount of shear damage that he inflicted upon his motionless foe. Mark wandered away in horror. He thus abandoned what he thought was Levy’s corpse in the wasteland that surrounded him.

Remarkably, Levy survived the savage beating. Clinging desperately to life, he used the last of his strength to open a portal. That one went back to the dimension of the Doctors who had initially repaired and enhanced his body. Once again, the Doctor’s went to work on Levy repairing the damage he had incurred at the hands of his enemy.

For the next several months Levy recovered from his ordeal. During this time, he surreptitiously spied on Invincible using small robotic cameras. As he observed his enemy, he realized that there was no way he would be able to match the young hero’s raw power.

The young hero seemed unstoppable. From this thought, a new plan blossomed in Levy’s mind. He realized the simple truth in an old saying, “If you can’t beat them, join them.”

Levy recruited twisted alternate versions of Invincible from other dimensions. These alternate versions were conquerors, villains or psychopaths. He promised them wealth, and help in expanding their empires.  In return he asked for one simple thing: destroy his Earth’s Invincible’s reputation and bring the hero to his knees.

In the wake of the war, Levy summoned the remaining Invincibles to a desert location. He commanded them to bring the current reality’s Invincible to him. The alternates balked at this command. They threatened an immediately mutiny. Levy however, was prepared.

He banished the remaining alternates to the very same dimension where he suffered his beating at Invincible’s hands, stranding them there for all time (and coincidentally saved Earth).

Levy was then immediately confronted by the true Invincible and his few remaining allies. Levy knew he was outmatched, but nevertheless attempted to fight the weakened heroes. They still proved to be too much for him. Once again, Levy was forced retreated to the dimension of the Doctors. Howbeit, he lost his right arm.

Upon his arrival to the dimension of his Doctors, Levy expected the same amount of aid he had received in the past from his generous hosts. Instead, the Doctors ominously declare the Levy had used up all of their charity. He was now in their debt.

Levy is currently a “guest” of the Doctors. He has been restored to full health and his arm has been surgically replaced with an artificial limb. How the Doctors intend for him to work off his debt is unknown at this time. But it is sure to mean trouble for Invincible.

Before his mutation, Angstrom looked like typical Black man, with a thin build and unkempt hair. He never dressed like he had an abundance of money, rather he dressed in relatively plain garb, with no frills whatsoever.

The accident mutated Levy drastically. The folds of Levy’s brain (called gyri ) and the spaces between the folds (called the sulci ), were mutated outside of his cranium. They now cover his upper back, shoulders, neck and head, giving him a monstrous appearance.

In addition, Levy visited the Doctors after his accident and they further altered his physiology, adding at least 10 lbs of solid muscle to his relatively thin frame. The resulting Levy was a much larger, more muscular and menacing individual.

Finally, Levy bears the marks of the savage beating he received from Invincible all over his body. His face is heavily scarred and visible sutures are still present around his head, seemingly holding it together in places.

Levy initially attempted to dress normally by wearing slacks, a dress shirt and even a overcoat, but eventually abandoned this garb for a typical supervillain costume. The costume is an all black number with a flowing red cape.

Angstrom Levy was a brilliant but amoral scientist who only wanted to be able to use his powers to their full potential. His desire to exploit his abilities drove and consumed him to break laws and cut corners in order to satiate it.

While Levy wasn’t willing to actually kill anyone to achieve this goal, hurting someone or working with criminals were acceptable costs to him at that time.

The accident affected Levy greatly, distorting his memories of the events leading up to the accident, and transforming him from an easy going yet morally challenged person into a violent psychopath.

Levy’s sole reason for being now is to gain vengeance on Invincible for causing the explosion that disfigured him. It doesn’t matter how he does so, or who needs to die in the crossfire.

Angstrom Levy (Before the accident)

“No !! I will not have my greatest triumph sullied by this child’s death ! Stop, or I’ll stop you myself !!”

Angstrom Levy (After the accident)

“I can feel the knowledge of a thousand worlds flowing through my brain — more information becomes available to me every second — WE DID IT.”

“Yes — Invincible — I have knowledge of him from a dozen worlds. He will be easy to find — EASY to KILL … or much worse.”

“NO — This dimension’s medical technology is laughable compared to some. I will seek medical attention elsewhere — and when I’m done, I’ll HUNT DOWN this Invincible.”

“I’ve learned a lot about you Mark Grayson. Lots of things. I know how violent you can get when you’re mad — like right now. I know you get that from your father.”

“You see this ? I’m a freak — a deformed freak — so I guess it’s understandable that you wouldn’t recognize me ! When you saw me before — when you did this to me — I looked a TAD more normal !!”

“I’m Angstrom Levy ! The next time you forget my name — It will be because you are DEAD !”

“I’m not stupid enough to think I could best you in hand to hand combat — but that is what I want. Did you think anything less than killing you with my bare hands would satisfy me ?!”

“This world is in ruins, this Invincible’s reputation is destroyed. The people here will always hate and fear him because of what you’ve done. Now all that is left is to disfigure him. I want him to know what pain he’s caused me.”

One of the alternate dimensions that Levy banished Invincible to was the DC Universe. While the character in use wasn’t seen entirely on panel, it was heavily hinted that Invincible encountered Batman while banished there.

Levy can easily be slotted in this role again, or encounter dimension hopping heroes from the DC universe.

One of the alternate dimensions that Levy banished Invincible to was the Marvel Universe. Levy can easily be slotted in this role again, or encounter dimension hopping heroes from the Marvel universe. 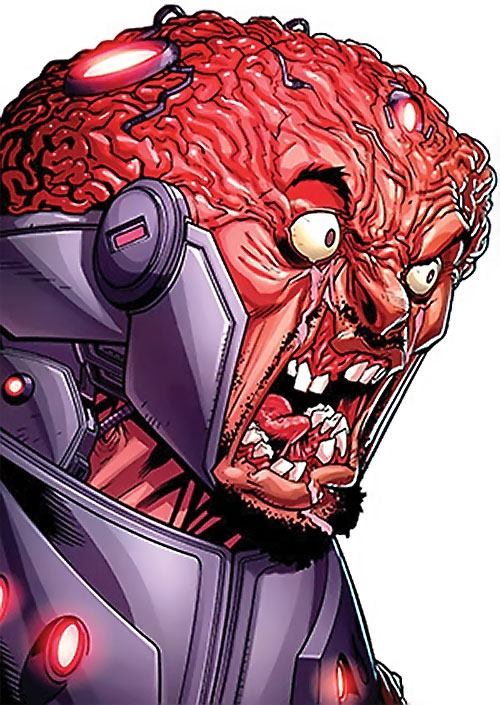 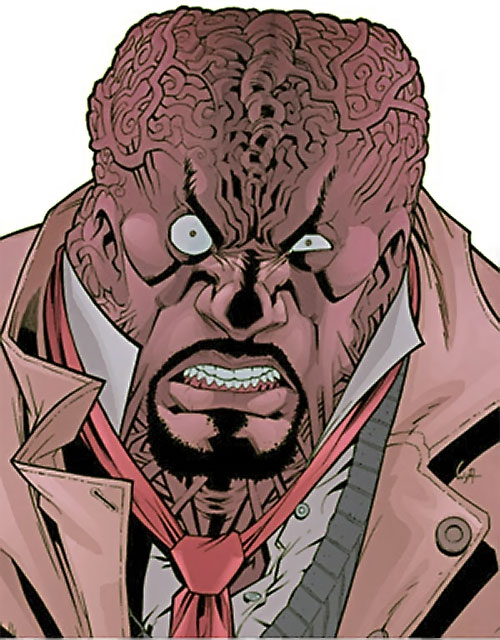 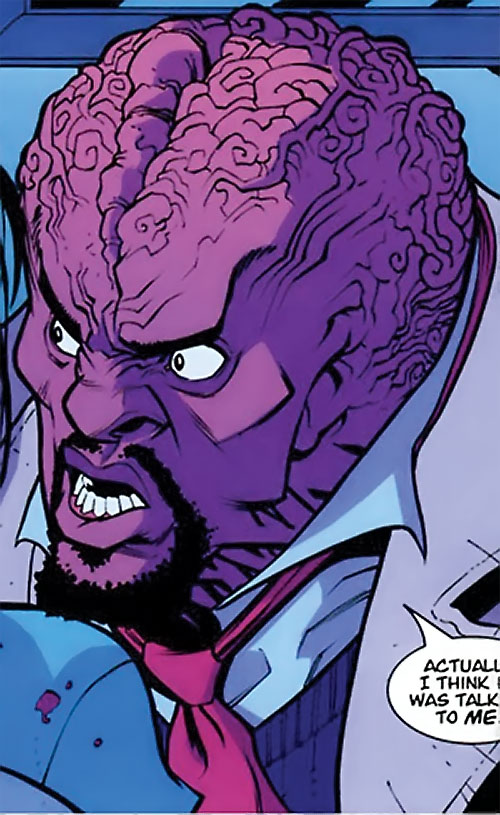 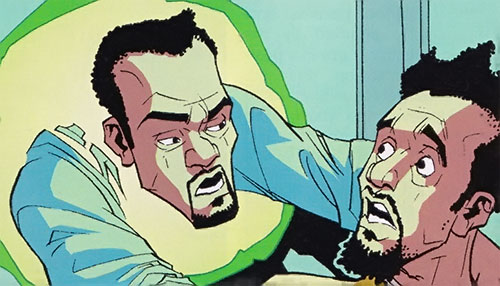 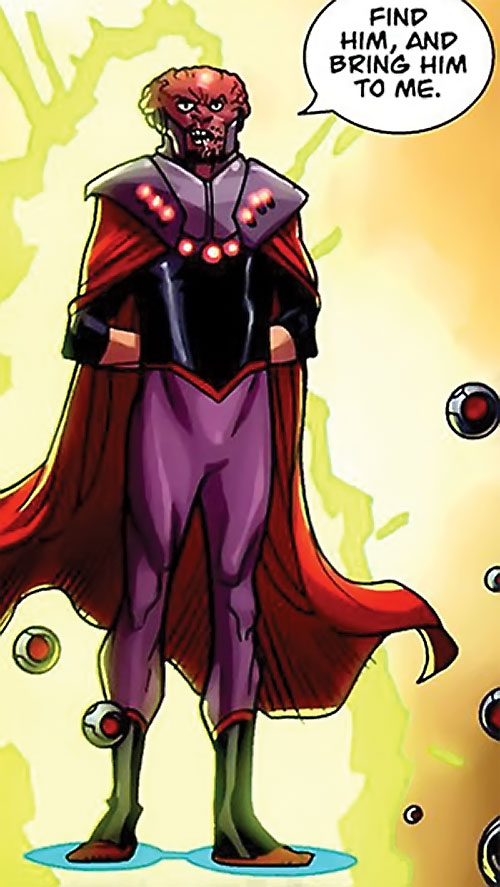 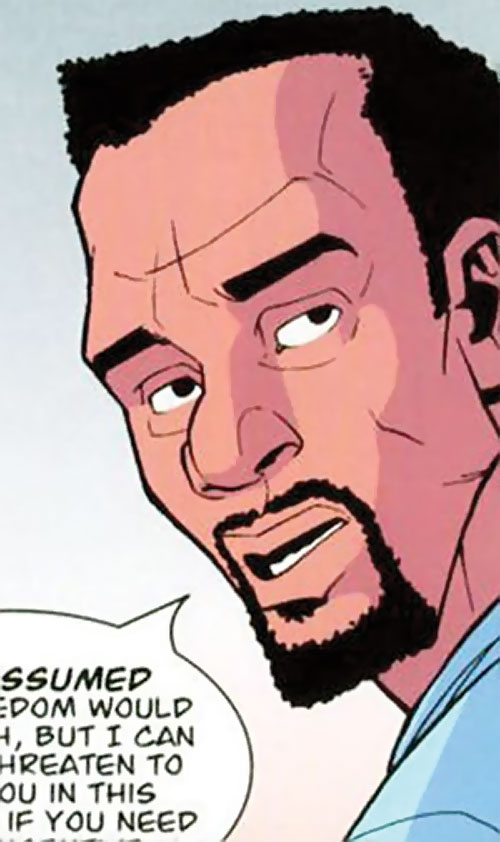 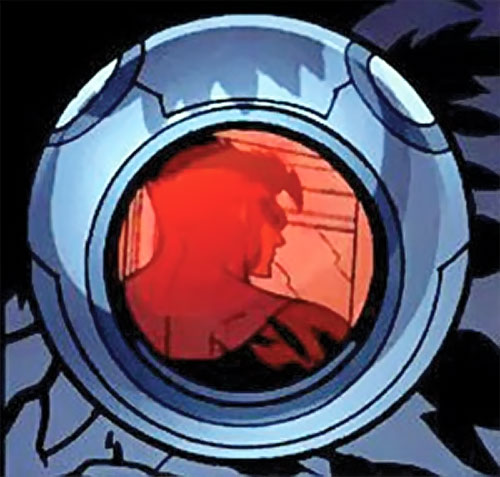